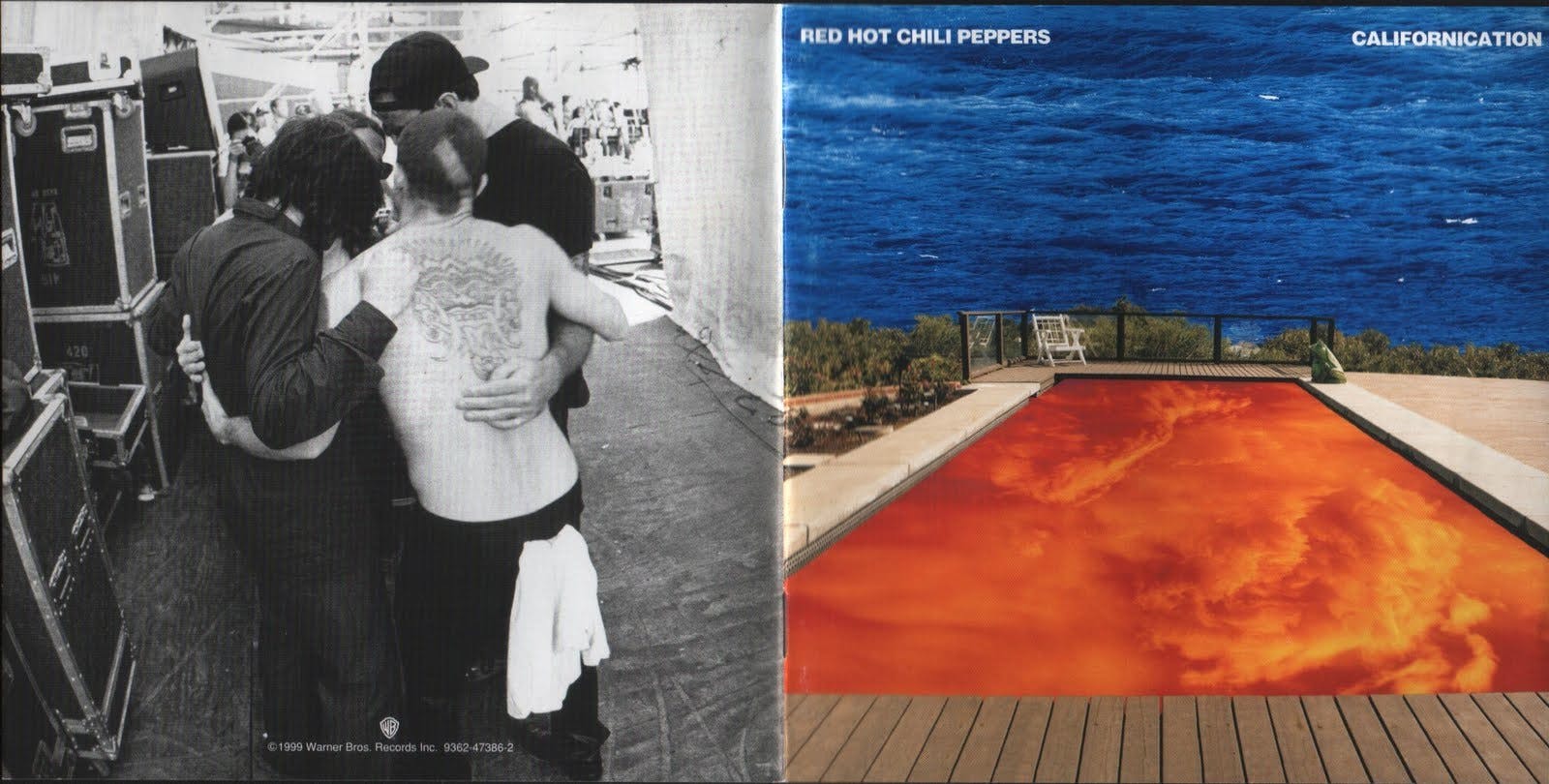 “I’ve never given a shit what other people have thought,” reads a somewhat defensive pull-quote from Red Hot Chili Peppers frontman Anthony Kiedis in a cover story in a 1999 issue of Kerrang!, just prior to the release of the band's 1999 album Californication. The interview took place in a bungalow in the Beverly Hills Hotel, and it seems like the whole experience was pretty awkward: the article opens with drummer Chad Smith staring at his shoes in discomfort while Anthony’s answers to the journalist’s questions become increasingly terse.

Right off the bat, the article poses this question: With all of the stunts the band have been pulling (e.g. putting socks on their dicks; wearing flaming helmets atop their heads; purposefully donning wacky, teeth-baring facial expressions at all times), are the band worried -- especially with an important and decidedly darker record on the horizon -- they might be in danger of being known more as cartoon characters than for their actual music?

As Anthony and Chad spin their wheels and try to put aside their very apparent displeasure at being told they’re a joke, bassist Flea shows up for the photoshoot wearing a shower cap on his head...and proceeds to moon the photographer. A collectible poster of a bare-chested Anthony appeared in the magazine with the quote, “You’re suggesting I’m a cartoon?” scrawled across it.

In 2019, an accusation such as, “acting like cartoon characters detracts from your great music” feels pretty tame. By comparison, far worse things have already been said about the Chili Peppers. For starters, there’s that infamous, vicious Nick Cave quote: “I’m forever near a stereo saying, ‘What the fuck is this garbage?’ And the answer is always the Red Hot Chili Peppers.’” Later, a FOX News presenter referred to them on air as “the worst band on the planet," and in 2014, comedian Jon Daly released a near-indistinguishable parody of the Chilis entitled Abradabracalifornia, with lyrics that refer to (among other things) putting a stick up your butt, and “bang-a-bong-a-bong-a-bang-Burbank." And for many years, low-hanging-fruit, bottom-shelf insults referring to the band’s alleged lack of talent or number of references in their songs to their beloved home-state of California have become so commonplace that people often regurgitate them without even thinking. And to be honest, they’re usually uttered by those who haven’t actually listened to any of their records in decades -- if at all.

The truth is, Californication, which turns 20 today, is and always has been a really fucking great album. Twenty years after its release, it stands as a testament to the band’s ability to shed their goofy, white-guy sex-funk image and get real about drug abuse, loneliness, and the stark, empty underbelly of Southern California.

When Scar Tissue -- the album’s pained, sarcastic first single about Anthony’s experience struggling with heroin and being happy to be alive -- first hit the airwaves in 1999, it was clear that the Chilis had a new trajectory. The video depicted the four members, rolling lazily through the dusty desert landscape of Joshua Tree in an old convertible -- all sporting various poorly-tended, bleeding wounds -- singing about things like “blood loss in a bathroom stall.” There was no wacky rapping, as was prevalent on Blood Sugar Sex Magik and other past records, and no wild, psychedelic guitar riffs that Dave Navarro had played in John Frusciante’s brief absence on the previous release, One Hot Minute. In fact, they'd managed to turn their signature funk guitar sound on its head entirely by throwing it into a minor key with stark, minimalist plucking -- immediately creating a new sound that, to this day, is distinctly Californian.

In Anthony’s autobiography, also called Scar Tissue, he attributes the shift in guitar-sound to the fact that John’s chops had taken a bit of a hit when his guitar-practicing took a backseat while he was getting sober. “I loved the way John was playing when he didn’t have the technical capacity to do everything,” he wrote. “He toned down and developed an incredible minimalist style. Every day he came up with something spectacular.”

That’s not to say there weren't any rapping or funked-up jammers on the record, though: The first track from the album, and the third single to be released on the radio, was the Flea bassline-driven rager Around The World. And naturally, as is the RHCP way, it contained some absurd lyrics like, “I know, I know for sure, ding, dang, dong, dong, deng, deng, dong, dong, ding, dang.” Similarly, the tracks Get On Top, I Like Dirt, Right On Time, Easily, and Emit Remmus (which, funnily enough, was inspired in part by Anthony’s friendship with Sporty Spice) vacillated between psychedelic funk riffs, signature-Kiedis scatting, and served as comic relief and mosh-fuel between the poignant moments. The beauty of the Chilis is that songs don’t have to be deep in order to be flat out fun.

While the loud, bombastic, hits might be what the record is known for, a lot of Californication’s magic is contained in the quiet moments. Porcelain is the sleepy, delicate track Anthony wrote musing about motherhood after meeting a young, heroin-addicted mother at a YMCA. Road Trippin’, at first glance, is a simple song about taking a trip -- either a literal or metaphorical one -- with your best friends. But John’s acoustic-guitar performance on that song is downright breathtaking -- and the iconic line, “These smiling eyes are just a mirror for the sun” paints a picture of worry-free, blissed-out, pre-9/11 Californian youth.

While not exactly quiet but still beautiful, tracks like This Velvet Glove, Savior, and Otherside also showed off the band’s newfound ability to build a song upon itself in intricate ways and pull on the melancholic, nostalgic heartstrings in ways they hadn’t done previously, save for maybe One Hot Minute’s My Friends. The video for Otherside was also likely the most iconic one from the album, if not that entire year: Set in a grey, seemingly half Tim Burton, half MC Escher world, it follows a protagonist who is forced to fight fire-breathing monsters and giant birds before using a painting of lips as wings and crashing to the ground in an Icarus-like fashion. All the while, John and Flea pluck out their guitar parts on ropes and telephone lines, Chad hits a spinning drum with giant mallets, and Anthony sings ominously from a watchtower, hair entirely bleached save for a black spot above his eyes.

The crowning achievement of the record, however, is the title track, Californication. The song is desolate and wistful, tackling the darkness creeping beneath LA’s sparkly veneer and futile promises of stardom, fabricated in the basements of Hollywood by tired movie-industry workers and chased by people worldwide for decades. “Pay your surgeon very well to break the spell of aging -- celebrity skin, is this your chin, or is that war you're waging?”

Californication’s cultural staying power was proven in 2007, when it was adopted as the title of the TV show starring David Duchovny. Appropriately, it was about a writer from New York who is forced to move to LA with his girlfriend and surly teenage daughter, despite his hatred of the plasticity and lack of walkability. Once his alcoholism and sex addiction meet the city’s hedonistic and opportunistic ways, his family falls apart.

“Tidal waves couldn’t save the world from Californication,” the song concludes, blunt and defeated.

If anything, as Kerrang! pointed out to them in 1999, Red Hot Chili Peppers have, in fact, painted themselves as caricatures throughout their career, and even throughout the era of Californication, despite its dark undertones and moments of clarity. But there’s absolutely zero rule -- especially in the outlandish circus of a world we call rock ‘n’ roll, that says a person can’t be a cartoon character and simultaneously produce art that is fun, poignant, relatable, and culturally important. The Chili Peppers mastered that art on Californication, and 20 years later, the album is just as important as ever.

Will the Red Hot Chili Peppers appear at Worthy Farm this summer? This tweet might suggest so…