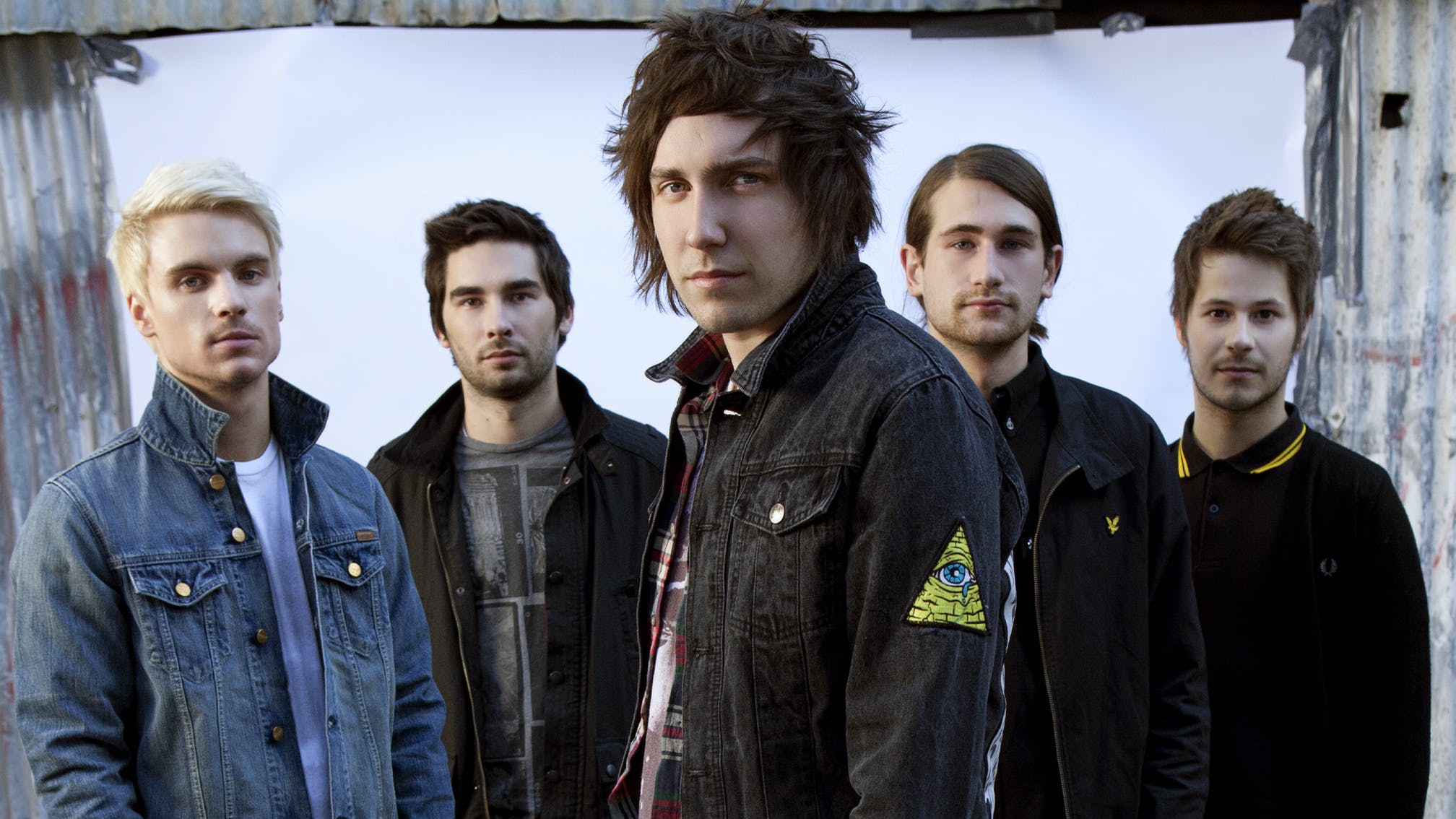 Over a decade has passed since You Me At Six’s monster dark rock album landed in 2011. Charting new territory, Sinners Never Sleep reimagined the band's gritty ambition and in the process created some of the scene’s most beloved alt. anthems. Now, nearly a year after COVID struck down the band’s efforts to perform the record in full, the Surrey rockers have eagerly returned, ready to let loose on their commemorative stint of shows.

Here, frontman Josh Franceschi guides Kerrang! through a track-by-track deep dive on Sinners Never Sleep. This is what we found out…

“We knew we wanted to make less of a straight-up pop-punk record. We wanted a grittier, dirtier, more abrasive record. Loverboy was that nice middle ground between [2010 second album] Hold Me Down and the direction we wanted the band to go.

“Loverboy was a statement of intent and it shifted people's perception that this band isn’t just for young emo pop-punk girls and boys. Now it's like, 'Oh, this band could be one of those bands and we're still talking about in 10 years' time and let's see where they go.’ It's exciting.”

2Jaws On The Floor

“Jaws On The Floors is one of those that was part of the record, but I don't think it necessarily played a massively significant role in anything changing – but it does maybe act as a crutch and elevate some of the songs. It's cool, but I don't think it's any of our favourites. I don't think we've actually played that song for probably 10 years, so it'll be interesting knocking it out [at the anniversary gigs]…”

“Bite My Tongue could write its own story like 100 times. It's just one of those songs that was innocently put together. There wasn't much of a conversation of, ‘Oh, you should jump on this song,’ but I remember saying, ‘We've got this song and it's really an open wound bearing how fucking pissed-off I am with so many people in my world right now.’

“There's a bit in the middle that needed some screaming on it and I can't really scream the way that [Oli] can, and he was like, ‘Mate, let me give it a go and see what we can do.’ We literally knocked it out in about 20 minutes. I think he might have done two or three takes and that was it.

“Everything surpassed our expectations with Bite My Tongue, but at the same time it definitely did what we wanted to do, which was to say, ‘Don't write us off just like that.’ That song has been performed all over the world and that's probably been one of the biggest, if not the biggest song in our sets for the last 10 to 12 years.”

4This Is The First Thing

“I'm trying to think about stuff retrospectively, and back to 19 or 20 years of age writing this record. When we started putting it together there wasn’t any real thinking behind it – which is why I think it’s a bit of a car-crash record. It's innocently ignorant in that sense.

“I think it was just a classic thing of I had broken up with my first serious girlfriend and I was trying to progress my [creative range] and make it less teenage angsty and more sophisticated. That was kind of the starting of my maturity as a boy to man, and as a songwriter.”

5No One Does It Better

“The sentiment of No One Does It Better was looking at the community and saying, ’No-one does it better than you, so have a little bit more trust and faith in yourself.’ More often than not, that song gets confused as a love story between me and somebody else, but it's not. The end is a classic You Me At Six moment where it was such a throwaway sort of napkin lyric, but it just became this thing where you can see what it means to people when they're singing it to somebody else.

“This song became something it was never meant to be, really. It was a rallying cry for myself and it ended up being this thing that's lived its own life. Your records and songs become worlds that people inhabit themselves and that's one of my favourite things.”

“On the Sinners tour in Aberdeen, a young girl stopped me and she was like, ‘Don't you think it's crazy that you've written Little Death and everyone has made it into a parody about nachos and eating Mexican food?’ She starts showing me all this stuff she's printed out from Tumblr about 'We are nacho lovers. We are nacho friends'. It's us but with sombreros on us and fake moustaches. When any of us would be photographed with a Corona in our hand, it became a meme on Tumblr. Next tour, we had a T-shirt that said ‘We are nacho lovers. We are nacho friends’ and that sold so fucking many!

“I'm telling you this is because it's about the spirit of this band. Our fanbase allows us to do what we do. We don't go, ‘Thanks, cheers for the money, fuck off.’ That's never been the relationship we have with our fans. They take things and make them what they want them to be and that's what happened with Little Death. We’re very lucky to have incredible fans.”

“When we first tracked Crash the boys said the lyric, ‘prisoners of love is so lame’, but I was trying to carve out something visceral like when you're in love, you're not in control when love is that potent. I feel like that song soundtracks quite a lot of crying? I don't know. Probably… I get that impression (laughs). It's a beautiful song. It’s a love song so it definitely moved the needle and we levelled up. That was one of those songs that you knew was going to grow the band.”

“Loverboy, Bite My Tongue and Reckless are the spine of this record. I remember playing Reckless at Reading Festival 2012 on the main stage and we'd just been dropped from EMI, our record label, and there was probably like 80,000 people all jumping up and down, throwing shirts above their heads. It was that song and that moment at Reading that got us signed to our next record label six months later. It really set us all up and, ultimately, took us to Wembley Arena. It was literally living the dream, headlining Wembley. Reckless is the centre point of all that good stuff happening around it.”

“We made really good friends with Parkway Drive on Warped Tour 2010 and, for whatever reason, we got put on the heavy stage and it wasn't You Me At Six-sounding at all. We spent a lot of time with Parkway Drive. One night I was like, ‘We’re going to make a song and you guys have to be on it. We should do our version of a heavy song.’

“The only notes that I sent Winston were, ‘If Boneyards or Carrion was a You Me At Six song.’ I asked him how it went and he was like, ‘I’ve got it’, so I told him to send it over. I started laughing because it was absolutely everything I wanted. I think it's wicked that we have two of our favourite vocalists and heavier bands on this record. I just remember thinking, ‘This is gonna really shake things up for how people perceive us.’”

“Little Bit Of Truth is the song for the morning after and the night before. It gives you reassurance that stuff is alright. Lyrically I wanted to feel like what I'm doing as a frontman is right – I wanted to make sense of it, but none of it really did make sense – I didn't really understand how to navigate my position around it. I don't really understand the expectations. I just want to be somebody that plays music as a job, and everything got a bit heavy.

“I showed this to the [You Me At Six] guys and Paramore. It was a song that Hayley [Williams] earmarked and one of the things she said was, ‘I feel like I know exactly what you’re talking about, because it’s almost something that other members can’t understand.’”

“The Dilemma was a really, really simple one. I wrote the verse and I showed the lads and said, ‘We should do something theatrical, almost like Panic! At The Disco.’ We were trying everything on this record to see who and what we are.

“I've always referred to this record as a happy accident. None of it was meant to make sense and The Dilemma was one of the songs that had an identity crisis throughout, but then it all slotted into place quite effortlessly at the same time. The first time I played it, it was fucking cool – it was a staple on our set for a very long time.”

12When We Were Younger

“When We Were Younger was our attempt at making a song that was ambient music you could fall asleep to, and it had this desperate story attached to it.

“It’s when the illusion goes and you realise that whoever you looked up to are not superheroes. It was the first time in my life that I really had an understanding of that. You realise that your parents aren't superheroes. I wrote a song like this because when we were younger everything was better. I left school when I was 16 and that song is a statement saying: ‘Look at that thing I was gonna go and do – I hope you're proud of me.'

“That was kind of where the song was fuelled from. When we performed at Wembley, I flipped the last line of the song and I said: ‘I told you that I’d headline Wembley,’ rather than, ‘I hope you'd be proud of me.’ That's why we finished the album with that song.”

You Me At Six will perform Sinners Never Sleep in full at Leeds Temple Newsam Park on June 1, and Hatfield Park on June 2.