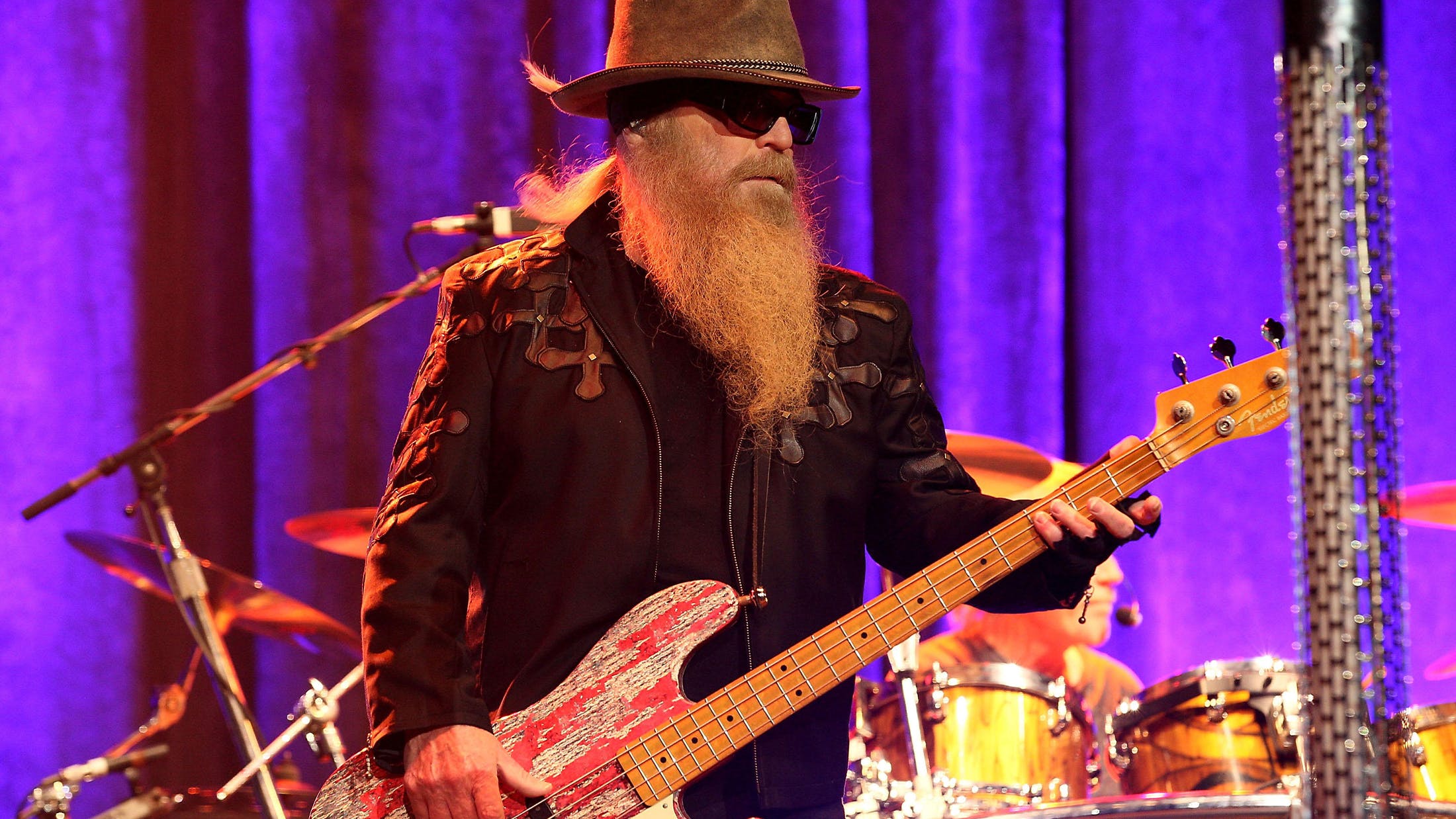 You only had to see Dusty Hill onstage once to understand the sheer soul and power that the man possessed.

His playing was full and warmth and dexterity, his pocket-tight bass runs weaving closely with the thick, fuzzy playing of guitarist Billy Gibbons and the irresistible grooves of drummer Frank Beard to create ZZ Top’s unique, blues-rooted sound.

Dusty’s death at the age of 72 robs us one of one rock’s truly unique bass players, and was confirmed by his bandmates in a joint statement.

“We are saddened by the news today that our compadre, Dusty Hill, has passed away in his sleep at home in Houston, TX. We, along with legions of ZZ Top fans around the world, will miss your steadfast presence, your good nature and enduring commitment to providing that monumental bottom to the ‘Top’. We will forever be connected to that Blues Shuffle in C. You will be missed greatly, amigo.”

Born in Dallas, Texas, in May 1949, Joseph Michael Hill started playing the cello at a young age before discovering the more visceral thrill of rock’n’roll and immersing himself in the local blues scene.

With his guitar playing brother, Rocky, and their friend Frank, Dusty formed his first band, The Warlocks, while still at high school. Two singles followed in ’66 prior to the trio morphing into American Blues. Influenced by local Texan psychedelic heroes The 13th Floor Elevators, the band augmented their sound with keyboard player for their first self-titled album (also known as American Blues Is Here) released in 1968 on local label, Karma.

Despite their local success, American Blues elected to move to Houston in late ’68 where Rocky soon left the band and where Dusty and Frank would join fellow psych-blues adventurer and ex-Moving Sidewalks guitarist Billy Gibbons in his new band ZZ Top.

Having already released one single prior to Dusty and Frank’s arrival, Billy began to refine the band’s sound, creating an earthier, more stripped-down approach and adding a large dose of humour to their lyrics. In Dusty and Frank it was also evident that the guitarist had recruited players who were genuinely kindred spirits.

Dusty’s contribution to the trio’s success was immeasurable and evident from their opening salvo, ZZ Top’s First Album, released in 1971, his role as a songwriter and as a singer growing as the band developed their trademarked boogie sound further.

While their first album garnered a strong local following, it was their second effort, Rio Grande Mud, that saw them reach a national audience, the album’s only single, the hard-driving Francine, showcasing Dusty’s ability to add to the band’s uproarious party vibe by blending his backing vocal perfectly with Billy’s lead.

By their third album, 1973’s Tres Hombres, Dusty was responsible for co-writing eight of its 10 tracks, as the trio solidified their sound and hit genuine pay dirt. Such was the album’s impact that not only did it peak at Number 8 in the U.S., it left an indelible mark on fellow musicians. Among the bands influenced by the Top’s righteous, heads-down approach were Motörhead who served up their own version of the LP’s third track, Beer Drinkers & Hell Raisers – a tune where Dusty and Billy shared vocals on alternate verses.

Dusty’s role as a songwriter and a co-vocalist remained central to ZZ Top’s sound and approach through the band’s entire career, his down to earth nature typified by the fact that when the band decided to take break in late ’77, he simply took a job rather than take a holiday.

When ZZ Top regrouped both Dusty and Billy had grown near-identical beards, unwittingly creating an image that would define them from thereon. The two albums that followed, Degüello and El Loco, saw the band expanding their sound, the latter in particular adding synthesisers to the mix. Both also included tracks that showcased Dusty’s soulful vocal style on HiFi Mama and Party On The Patio respectively.

The real step change for ZZ Top came in 1983 with the release of their eighth studio album, the world-beating Eliminator – 11 tunes that further emphasised the band’s use of synths and melded them to overtly radio-friendly hooks.

Augmented by a string of highly stylised videos starring Billy’s 1933 Ford Coupé (re-drawn for the cover), the album transformed the trio into unlikely MTV stars. Eliminator also spawned a string of global singles in Gimme All Your Loving, Got Me Under Pressure, Sharp Dressed Man, TV Dinners and Legs, en route to selling a cool 10 million copies.

When the Eliminator tour hit London’s Hammersmith Odeon in November 1983, the backstage bar looked like a ‘Who’s Who’ of modern rock music, with Thin Lizzy leader Phil Lynott and Lemmy holding court. Watching the band soundcheck earlier in the day, it was also obvious that – for all their newfound pop smarts – the trio had lost none of their blistering blues-based power.

If Eliminator and its multi-platinum successor, Afterburner (a five million-seller Stateside), showcased the band’s evolving sound, Dusty remained their anchor for over 50 years – a wry, wise and understated presence within a band defined by their unity of spirit and near-telepathic approach to music.

He stepped away from the band in July of this year to address an issue with his hip, the band playing their first show in 51 years without him and with their longstanding guitar tech Elwood Francis filling in. ZZ Top have confirmed that they intend to keep touring with Elwood on bass.

While Dusty’s death brings to an end of one of the most enduring original line-ups in the history of American hard rock, the eternal joy with which he played contributed hugely to the indestructible quality in ZZ Top’s music.

As the tributes from fellow players continue to flood in, everyone at Kerrang! would like pass on our condolences to Billy and Frank, as well as Dusty’s family and friends. He was truly one of a kind…

Desert Sessions Volumes 11 & 12 Will Be Out in October