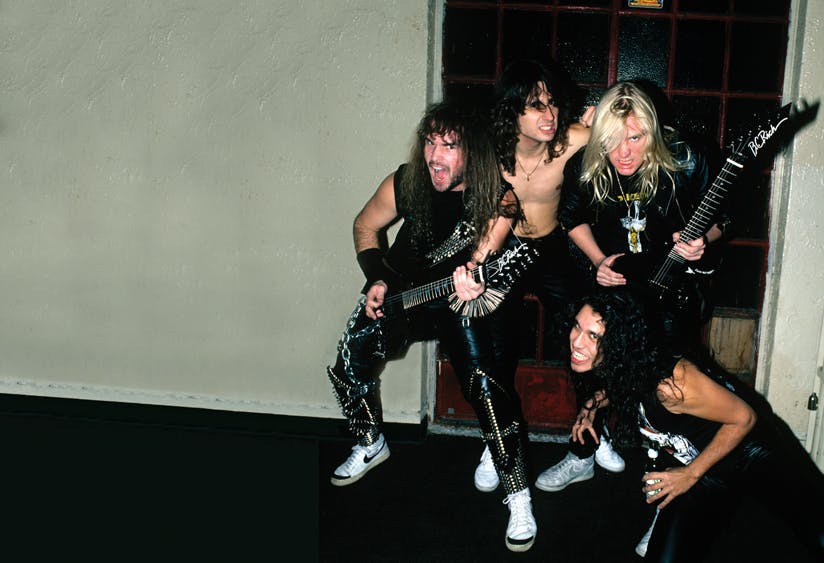 Few bands have had as great or as lasting an impact on the metal scene as Slayer – or SLAAAAAYYYERRRR!!! as they are more properly pronounced. The likes of Venom and Hellhammer had already started directing metal towards new, more extreme forms but it was Slayer who took that messy aural aggression and gave it a razor-sharp edge. Their musical hostility, confrontational stance and bloody, occult-tinged aesthetic would pave the way for death metal, black metal, grindcore and every other extreme metal offshoot to come.

You could argue that pretty much every subsequent metal band at the more extreme end of the spectrum owe their existence to Slayer, but here are 10 that owe the thrash legends a particular debt of gratitude…

Even in their early days, Slayer’s impact travelled all over the world, including Belo Horizonte and Sao Paulo in Brazil. Sepultura’s founding Cavalera brothers have cited Venom as their primary influence, but Slayer weren’t far behind. Guitarist Andreas Kisser – the band’s longest-serving member – told Mammoth Metal, "Without Slayer, there would be no Sepultura; it's as simple as that.” And considering Sepultura influenced a host of groove and nu-metal types themselves, you could argue that Slayer had a huge knock-on effect on those scenes as well…

Slayer also had a more direct influence on the groovier cats and kittens of the metal world. Lamb Of God frontman Randy Blythe – who came up in the punk scene – has said Reign In Blood was the first metal album he liked, but for guitarist Mark Morton the big one was the follow-up. “To me their album South Of Heaven had a big impact because there was so much groove on that album. I tried to create a similar heavy groove with Lamb of God,” he told The Entertainer. Lamb Of God played with Slayer many times and provided main support on the majority of the thrash legends’ final tour. Asked whether LoG were poised to assume the mantle of ‘the new Slayer’, Randy laughed, “There was no secret ceremony where we all sat down and Kerry King was, like, 'I give you the place of Slayer. Here's the Slayer throne.’ No-one will ever take Slayer's place. Slayer was an entity unto themselves – they helped create this style of music that we descend from.”

As the new dark lords of extreme metal, you can draw a straight line directly back from Behemoth to Slayer. Superfan Nergal once reviewed his heroes’ entire back catalogue for Kerrang! in honour of Slayer Day. Show No Mercy was the first Slayer record he fell in love with, but it was more than just the music that drew the young Nergal in. “I also was very much attracted by the aesthetics of Slayer which has been all about occult and Satanic topics,” he told us. “That was something that made them also stand out. It was evil, it was captivating, it was very tempting in many ways.”

As one of the Big Four of German thrash metal (alongside Destruction, Sodom and beery wildcards Tankard), Kreator were hugely influential in their own right. They helped lay down the blueprint for ever more extreme metal but, like so many others, drew a lot of their own inspiration from their Californian counterparts across the sea. Asked about Kreator’s influences on a German cable show, frontman Mille Petrozza replied, “Slayer… und Slayer… und Slayer.”

Alongside the likes of Death and Morbid Angel, Obituary completed the transition between thrash and death metal, building on what Slayer had already done. The Floridian deathsters finally got to tour with Slayer on their final farewell jaunt, with founding guitarist Trevor Peres describing the experience as “a bucket-list type of thing that took 30 years”. He told Hellbound, “Obviously, Slayer is a huge influence on Obituary and probably every freakin' extreme metal band and if they're not, I don't know what they're listening to.”

Even after death metal had been established as a genre in its own right, emerging bands still looked to Slayer as an influence, with many of the scene’s leading lights having grown up listening to them. Cannibal Corpse bassist Alex Webster, one of only two constant members alongside drummer Paul Mazurkiewicz told Westword in 2009: “Reign in Blood is one of the greatest albums ever. I love Hell Awaits, too, so that kind of stuff, I just listened to it so much at a very important time in my life as a musician when I was first starting out. That stuff got embedded in my brain, I guess. The other thrash bands were good, but they didn't have that dark sound that Slayer had. I think that the dark sound that Slayer had is why they're such an influence on the death metal scene.”

Ahead of their live-in-the-studio 2017 covers of Raining Blood and Postmortem, Ice-T took a moment to explain how rap-metal legends Body Count came to be. “We used the impending doom of a group like Black Sabbath, who pretty much invented metal, the punk sensibility of somebody like Suicidal [Tendencies], who basically put that gangbanger style from Venice, California into the game and the speed and the precision of Slayer. One of my favourite groups and always will be.” Oh, and if you’ve never heard it before, do yourself a favour and check out Slayer and Ice-T’s magnificent Exploited medley Disorder from the Judgment Night soundtrack – an absolute banger on an album that was a crucial part of rap-metal’s development.

As metal began a new mutation and metalcore started to rise to the fore, Slayer remained an inspiration and a musical influence. The Devil Wears Prada vocalist and occasional guitarist Mike Hranica told Artist Direct: “Like so many, Slayer has been a definitive metal band for me. I remember Reign In Blood being one of my first guitar riffs learned, headbangin' and driving around in my friends' car, and the general unity Slayer brought to the community of heavy-music-listeners.” He also acknowledged the domino effect that Slayer have had on generations of metal bands and fans: "Coming from a newer, younger generation I also have to mention that not only have I been directly inspired by Slayer, but also the undoubtable impact they have had on my favourite musicians, whom in turn further influence me. There aren't many bands that are creative enough to have an unmoving style passed from one generation to the next, but Slayer, by all means, is one of those bands.”

Paying tribute after Jeff Hanneman’s death in 2013, Machine Head frontman Robb Flynn recalled getting to go "all Slayer-nerd" after a show they’d played together, quizzing the guitarist on which of his favourite songs he’d written. “That man wrote both the music and lyrics to a large goddamn portion of my favourite Slayer songs. He was a huge influence on my songwriting growing up in particular with arrangements and the bold use of key changes,” Robb said.

When you think of classic Slayer, it might be Tom Araya’s Angel Of Death shriek or Jeff Hanneman and Kerry King’s serrated riffing and chaotic dual leads that spring to mind. But let’s focus on Dave Lombardo for a moment. Slayer’s original drummer was a massive influence on generations of future skin-pounders and his propulsive double bass assault was an integral part of Slayer’s sound. He didn’t invent the technique, but he pretty much defined it as an essential part of the metal drummer’s armoury. Slipknot’s original drum demon Joey Jordison was one of many who have cited Dave as a primary influence. “Reign In Blood really was the one that stepped it up for me, as far as noticing the speed and the overall aggression and power of what double bass can do for a song,” Joey told Drummer magazine.