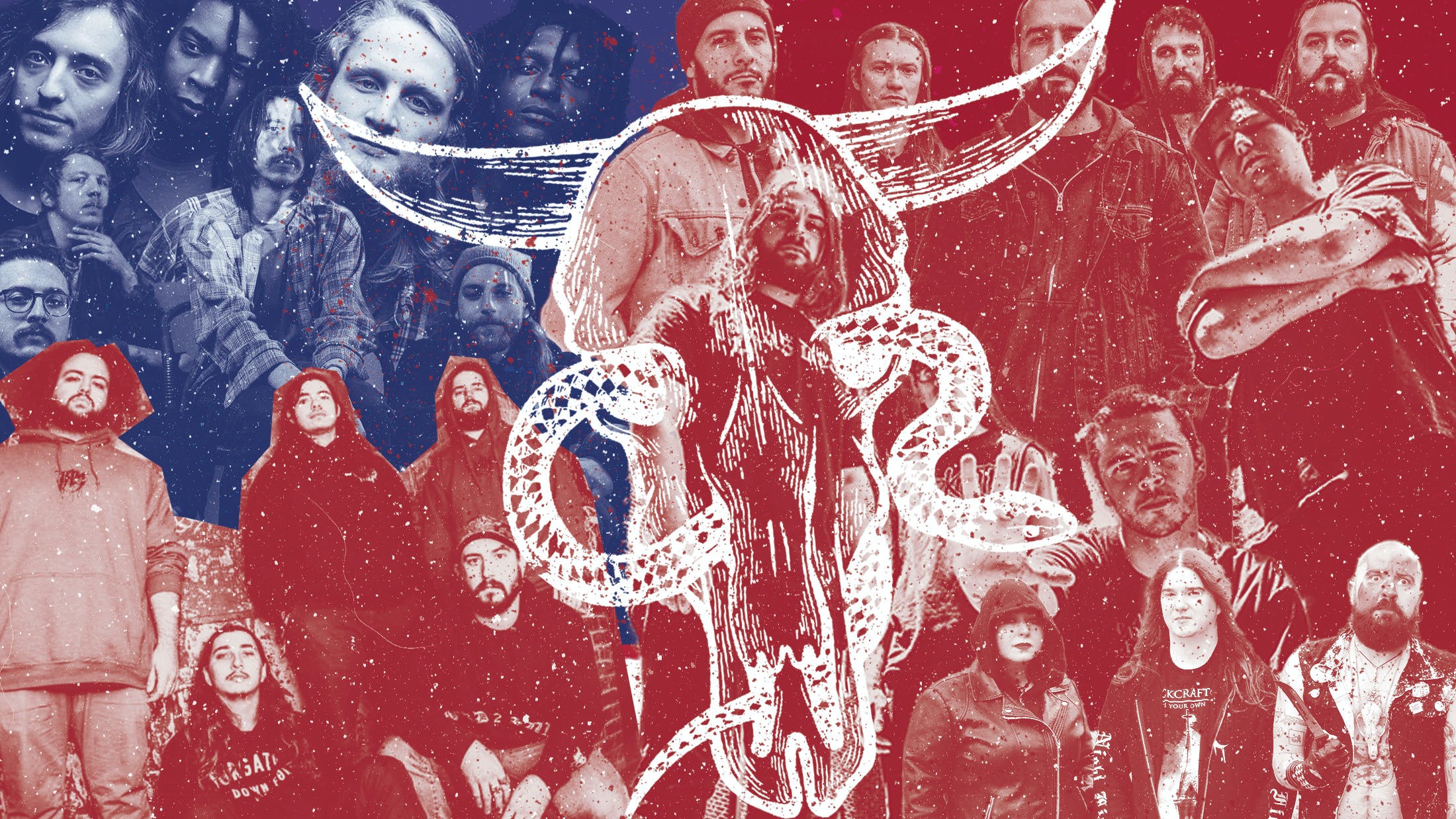 Few regions of the world have been as vital to rock and metal as the American South. The music of the southern states carries a sense of being forgotten and underestimated by the country's fashionable coastal cities, as well as a darkness born out of the area's bloody history of slavery and war. Whether it's the roots-deep influence of Delta blues and country music, or the more modern contributions of everyone from Pantera to Power Trip, the south has brought power and emotion to music that just cannot be faked.

Today, the south is proving as musically fertile as ever. A new breed of bands are lighting up the modern metal and hardcore scenes, armed with honest vulnerability and unironic fury that can be heard in music unhindered by worries about image and trends.

If any band is leading the charge for southern metal, it’s Orthodox. The Nashville, Tennessee, band play a mixture of groovy thrash and destructive hardcore that’ll have fans reeling in amazement. But it’s their moments of unhinged, heartsick nu-metal grime that truly set them apart from the pack, and earned them a 4K review for their new album Let It Take Its Course. For vocalist Adam Easterling, the Tennessee metal scene is “truly my favorite of any I’ve had the privilege of being a part of” -- but that doesn’t mean he falls into the idea of the cliched southerner.

“I feel like a lot of people assume we’re all just a bunch of rednecks who sit on our porch and listen to country music,” says Adam. “Though I’m proud of my southern roots, I don’t claim the ignorance of the area’s past, and I don’t conform to the politics of the generations before me. The south, given the fact that we have a lot to make up for, has really taken a step towards becoming a progressive corner of America and I think that there’s never been a better time to be proud to be from here.”

Few bands sound as huge and impactful as the state of Texas itself, but I AM are up there. The Dallas quintet’s incorporate all the aggression of death metal, the kinetics of hardcore, and the syrupy sway of groove metal, to create a sound that is nothing less than devastating. 2018’s Hard 2 Kill introduced the world at large to their enormous sound, and earned the band a slot on Thy Art Is Murder’s upcoming American trek. And while vocalist Andrew Hileman considers the band southern, he’s also quick to put Texas in its own category.

“We’re definitely from the south, but it is also its own thing,” says Andrew. “If you’re from Texas, you most likely got a lot of pride in it.” That said, he’s also quick to note that his home state’s energy comes not just in hard-hitting metal, but in the form of modern-day activism. “In reality, we got one of the most diverse populations and people standing up for a lot of ethical movements. Every month you can go downtown, and there are protests and rally’s supporting something good.”

‘Extreme metal’ often feels like a catch-all term to mean music with guttural vocals, but Codex Obscura earn the moniker. The North Carolina-based solo project has a distinct mixture of sounds; death metal provides the grinding, pounding base, but there are pinches of deathcore, slam, and even modern nu-core – all tinged with a bit of black metal disgust.

Not only that, but the band’s very existence is an example of how southern metal is often misrepresented as a stampede of groove riffs about whiskey and partying. "I'm a transgender death metal artist from North Carolina who gets all riled up and screams words really hard into a microphone,” says frontperson Amygdala on the project’s Bandcamp. “I write and record all the music, and most unfortunately, I mix it as well.” Unfortunately nothing -- this music is the stuff of the most cathartic form of nightmare.

While many of the bands emerging from the south today go for a more pounding, aggro-infused sound, Hag Graef are simply black thrash at its nastiest. Hailing from the unfathomable wastes of Florida, the two-piece have already released one of this year’s most frenzied, unholy albums of the year, Bastard Filth – a blazing gorge of obsidian slime that channels classic European darkness, while sounding distinctly American in its speed and attitude.

For frontman Vok, this extra bit of rancor comes in part from not trying to imitate the icy atmospheres of black metal’s European pioneers. “I don’t know that it’s possible to create music in the south that’s divorced from our environment,” he tells Kerrang!. “At least not without some sort of disingenuousness. There’s nothing ‘cold’ here. For three quarters of the year you’re walking around like you’re wrapped up in a damp wool blanket. It’s uncomfortable, stifling. You’re anxious and on edge. You sweat when it’s raining, and it rains constantly. From March to December your body is put in conditions similar to a panic attack all hours of the day. People come down here and they can’t cope with that.”

“Our sound is an amalgamation of a bunch of different styles on the metal spectrum,” says Michael 'Soup' Campbell of Atlanta, Georgia’s Satyr. “We all come from different backgrounds of influence but we didn’t want to fall into any one category.” This might be the understatement of the century – on their new album Locus, the quartet play the kind of panicked, shimmering prog-metal that’ll have fans of everyone from Baroness to Dream Theater doing laps of the room.

Michael says that the band’s unique sound is a mutant baby of the members’ various influences – his love of melodic pop-rock, drummer Brody Smith’s fandom of experimental death metal, guitarist Janald Long’s djent appreciation, and bassist Calvin Smith’s Japanese math rock obsession. “Our sound came about by just trying to merge the best parts of all those genres that we individually listened to into one song. We wanted each song to have a little piece for everyone. So it all came out melodic but technical.”

Nashville’s Vatican manage to balance both confrontation and vulnerability. It’s impossible to deny that last year’s absolutely blistering Sole Impulse was anything other than an assault on the senses, but at the same time, there is a tangible sense of agony and discomfort in both the band’s more melodic riffs and frontman Jonathan Whittle’s lyrics that keep Vatican from sounding like they’re trying to be either tough or crazy, instead reminding listeners of the humans behind the noise.

A visual example of this is the video for Thirty-One Staples, in which Whittle walks through an old house before revealing his trauma in a gasp-worthy way. “Thirty-One Staples is about revisiting my childhood home through a lucid dream,” Jonathan told Kerrang!. “Observing my past and witnessing an event which put me in the hospital for two months with 31 staples to the head and having to relearn all motor skills. I came out stronger thanks to the discipline I gained from having built myself back and learning from that experience.”

The state of Kentucky is known for its fine bourbon and (more comically than anything else) it’s fried chicken. But Louisville’s Greyhaven are putting it on the map of metal and hardcore, playing a frenetic and sincere sound. But while fans will be able to immediately hear doses of early-2000s metalcore and math metal, buried in there riffs is a distinct southern groove that makes 'em swing where others simply chug.

“I feel that people from the south tend to take things slower, there’s not as much of a rush in everything you do,” says bassist Johnny Muench. “That applies in the way we write our music as well. I think we really take our time and analyze each song we create."

The southern band that metal fans will probably hear the most about in the coming year is Irist out of Atlanta. The quintet's upcoming album Order Of The Mind is an absolute bruiser, combining influences from several contemporary legends – Gojira's powerful walls of melody, Meshuggah's blunt-force punch, and Arch Enemy's delicious melodies – to great effect. This approach quickly got them signed to Nuclear Blast, who'll release Order Of The Mind next month.

"We’re proud to call Atlanta home," says guitarist Pablo Davila. "There’s something in the air here that has definitely been conducive to us writing heavy music. We have a diverse music scene, and we feel like it’s helped push us to incorporate elements into our music that would otherwise seem a bit risky."

Imagine Motörhead and Darkthrone woke up hungover and discovered they'd made a record together – that's what Black Knife sound like. The Kentucky trio play stripped-down thrash that harkens back to the early days when black metal split off of the NWOBHM. Last October's Spell Caster is a lo-fi romp of nasty satanic rock'n'roll whose occult horror themes never overshadow Black Knife's catchy songwriting.

"Growing up here in Kentucky definitely influenced my song writing style in many ways," says frontman Hellwulv. "When I was young, I grew up in a small town with limited to no Internet availability before social media. So you really had to dig and search for music you loved. You heard about bands pretty much from word of mouth and by checking record stores constantly for cool records. That being said, you worked with what you had, which I feel sparked creativity and using my imagination a lot when writing songs when I was young. Naturally that stuck with all of the members though the years and later became Black Knife, a band that mixes genres and sticks to we we know and have always loved. Uniquely Kentucky, and proud."

It might surprise some that Howling Giant aren't from Atlanta, given how much their far-out stoner-prof might remind listeners of acts like Mastodon or Baroness. But the Nashville, Tennessee-based three-piece also bring a thunderous metal side to their music that keeps them from sounding entirely far out. On last year's The Space Between Worlds, the band certainly explore galactic horizons, but do so amidst a flurry of double bass and frantic picking.

"Sonically, metal in the south accepts an extra layer of fuzz and grime with open arms," says vocalist/drummer Zach Wheeler. "The tone is dirty, both instrumentally and vocally but we still have a heavy focus on melodic vocals and lead lines. Being from Nashville means that we’re surrounded by amazing songwriters from all genres and we try to learn from everything we hear. While the South definitely has a traditional sound when it comes to metal, there’s a lot of creativity swirling around right now and we’re stoked as the fires of Mordor to be a part of it."

The latest video from the Kentucky post-hardcore crew takes you on a sci-fi dream quest.

Greyhaven: On Their Bourbon Country Brand Of Chaos

Get to know Kentucky's leading new post-hardcore band before we stream their live performance on August 29.