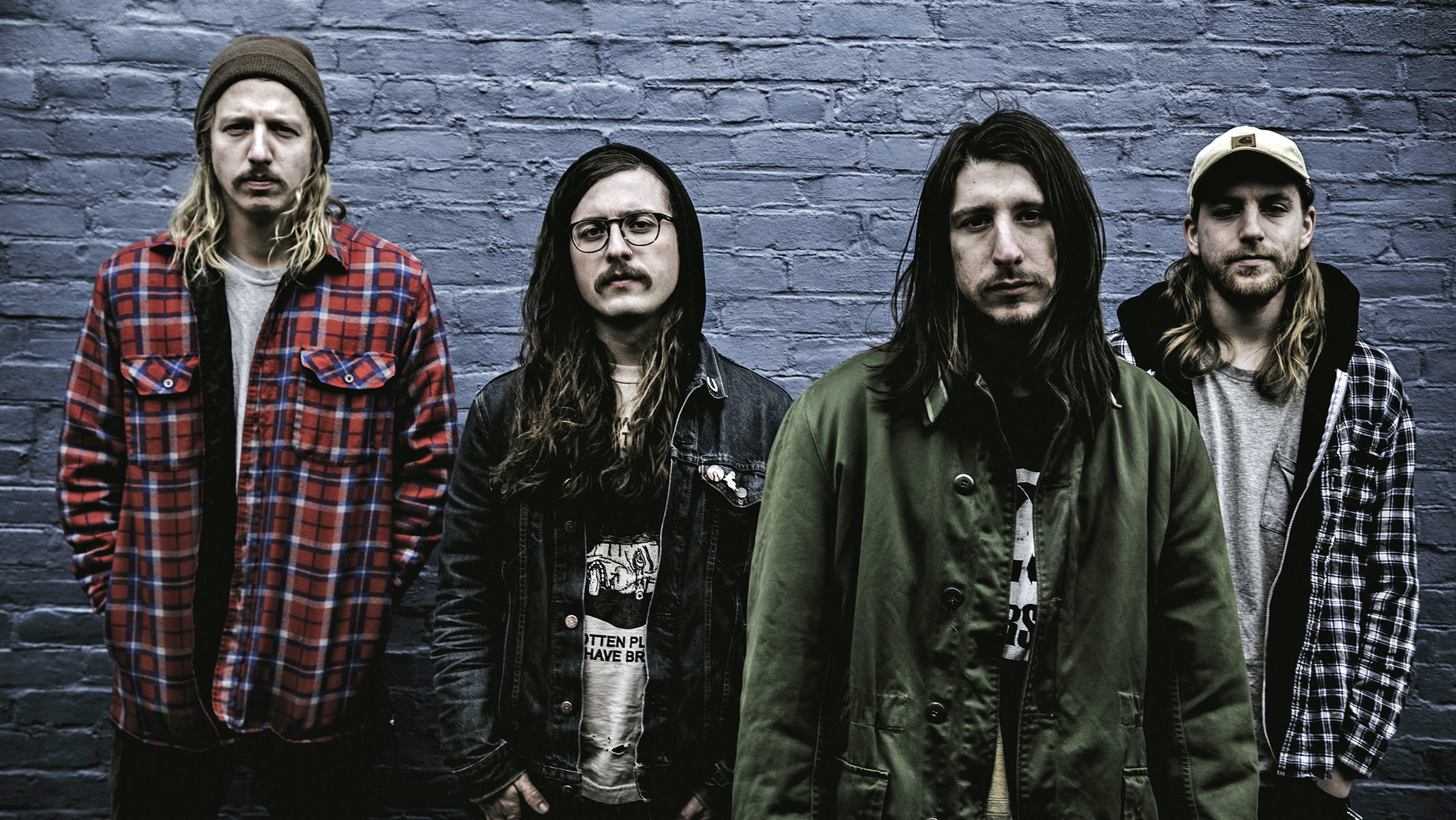 Louisville, Kentucky, is kind of an enigma. Some call it the “southernmost Northern city in the United States”; others, the “northernmost city in the South”. Dilapidated structures of decades past sit across from pristine, multimillion-dollar hotels and arenas. Vibrant urban centers host a variety of art and culture festivals – but drive 15 miles in any direction and you’ll hit cornfields and tractor pulls. During certain times of the year, residents start the week wearing shorts and flip-flops, only to break out their winter jackets and snow boots by Friday. Something as simple as the city’s pronunciation is even up for debate (though any true native will assure you it is “LOO-uh-vull”).

It’s only fitting that such a conflicted city would produce a force as chaotic as Greyhaven. In 2014, the four-piece dropped their debut album, Cult America, a hard-hitting, raw blend of harsh vocals and punishing riffs with influences ranging from heavy acts like System Of A Down and Every Time I Die to traditional folk songs and spiritual hymns. Not long after its release, vocalist Brent Mills and bassist Johnny Muench found themselves in need of a new drummer and guitarist, with Isaac Hale stepping away from his axe duties to focus on his other band, Knocked Loose.

Thanks to a bit of serendipitous timing, Greyhaven became whole again with the additions of drummer Ethan Spray and guitarist Nick Spencer. The new lineup signed with Equal Vision Records in early 2018, releasing their first LP as a unit, Empty Black, in March. With Empty Black came the introduction of a more polished sound and plenty of instrumental intricacy, though the band’s sense of churning, ecstatic turmoil remained. Since then, Greyhaven have toured with Norma Jean, and are now hitting the road this fall with Stray From The Path, Silent Planet, and Kublai Khan.

We sat down with the dudes in Greyhaven over what is perhaps the only consistently reliable source of comfort Louisvillians have in a world of uncertainty: bourbon.

Ordering at bars elsewhere in the U.S. is usually a pretty straightforward task: any alcoholic beverage will do. But at a whiskey bar in the heart of bourbon country, picking a drink is like shopping for a car. It takes thought and consideration. Appreciation and thorough understanding of Kentucky’s signature spirit is second nature here – something Johnny showcased by transforming our booth into a makeshift lecture hall for delivering a verbal dissertation on the process of distillation, while his bandmates browsed a menu of over 200 bourbon options.

It’s obvious that these guys are Louisville to their bones.

Kerrang!: What do you think is special about being an artist in Louisville?

Brent: Louisville is just big enough that there are a lot of different types of music going on. Country does fine, bluegrass does fine, hip-hop does fine, rock does fine, metal does fine. That lets the musicians in town feel free to experiment with stuff. Bands aren’t really afraid to do anything, because they know at least a handful of people will be receptive to whatever they’re doing. It can be weird, it can be mainstream, but there are going to be at least a few people that’ll be down with what you’re doing.

Nick: We were molded by some really cool shit in Louisville. Everybody is doing their own thing. We’re trying to do our thing, not adhere to trends. Musical acts here like the idea of keeping Louisville weird.

All of you have been around for a little while in the Louisville underground scene in different bands, but how did you guys come together?

B: When we lost our guitar player and drummer, we asked Ethan to practice with us, and he fuckin’ nailed it. He told us that day, ‘I lost my car, I lost my phone, I’m figuring out my living situation, and I’m not sure about my job right now,’ and he left. There were like six weeks where we didn’t hear from him at all. He was just…

B: I just texted him on a whim, ‘Is your phone back on? Would you want to come practice at some point?’ Coincidentally, Johnny and Nick had been hanging out around that same week. The practice that we lined up with Nick was the second practice with Ethan.

Johnny: Everyone liked each other’s bands. I randomly got really drunk with Nick after a show and asked him if he wanted to join. It just fell into our laps perfectly. It was a weird timing thing that just worked out.

N: I feel like some bone in my body – or the way I was raised – told me to create my own path. True happiness is only going to happen if you create something, if you don’t copy. When writing riffs, I want to make it cooler and more unique. I just want to create something new that hasn’t been done before.

J: I mainly listen to really soft, sad music, but I don’t like to play that. This is so much more fuckin’ fun to play, just coming up with the craziest riffs. It’s a constant challenge in pushing myself just to get better.

B: We always joke about it a lot. When we write something that’s ridiculous, we’re always like, ‘This is going to be a fuckin’ bitch to play.’ That’s exciting, because if you master this and it becomes easy, the next thing that’s hard is going to be way crazier than that.

J: We’ve always pushed those limits on chaos. I think we pushed it way further on Empty Black to where now we could have an acoustic slide guitar song next to the heaviest thing we’ve ever done, and we’ll somehow make it work. It just feels like we have a world of possibilities in front of us.

N: We haven’t set ourselves up to be pigeonholed into anything.

B: We just really don’t give a shit about trying to appease someone else with music. For us, the art is what’s important. It’s not about how big it gets.

What was it like when you first went into Will Putney’s studio and saw records from bands he’s previously worked with like Every Time I Die hanging on the wall?

J: I felt really dumb. I felt like any question I asked or anything I did was just really fuckin’ dumb. Not that they were making us feel dumb, it’s just the way we did everything had never been that professional.

N: It was one of those things where, when you see it, that should be the moment where you feel like, ‘Oh man, I made it.’ But that feeling didn’t come until afterward when you got comfortable with them. Then it was like, ‘I survived that, so maybe I did do something cool.’

Now that Empty Black has been positively received by fans and bands you’ve looked up to for years, has that feeling of imposter syndrome gone away at all?

B: Even if it was because each of us bought one.

N: It doesn’t matter how many it sold. I’d still be just as happy that we fuckin’ did that, that we got that out. We don’t have egos whatsoever. We could’ve just bragged about getting to play with bands like Norma Jean, but no, I’m pretty fuckin’ blown away by it, too.

J: Yeah, I’m not going to chill about that.

How does it feel when you see people at shows singing every lyric or coming to the merch table afterward to compliment you guys and shoot the shit?

B: When we were in California for the first time, one dude came up to us and was like, ‘I fucking loved your first record,’ and that blew my fuckin’ mind.

B: Yeah, man. It surprised me!

N: Same with people in New York City. Out of the million things you could do to entertain yourself there, they chose us.

J: I don’t think it’s something I can ever get used to. It doesn’t seem like something that becomes normal.

N: And I don’t want to ever let it become something that feels normal. The moment it does, I’m done.

Catch Greyhaven on tour with Stray from the Path, Silent Planet, and Kublai Khan this fall on the following dates:

The latest video from the Kentucky post-hardcore crew takes you on a sci-fi dream quest.