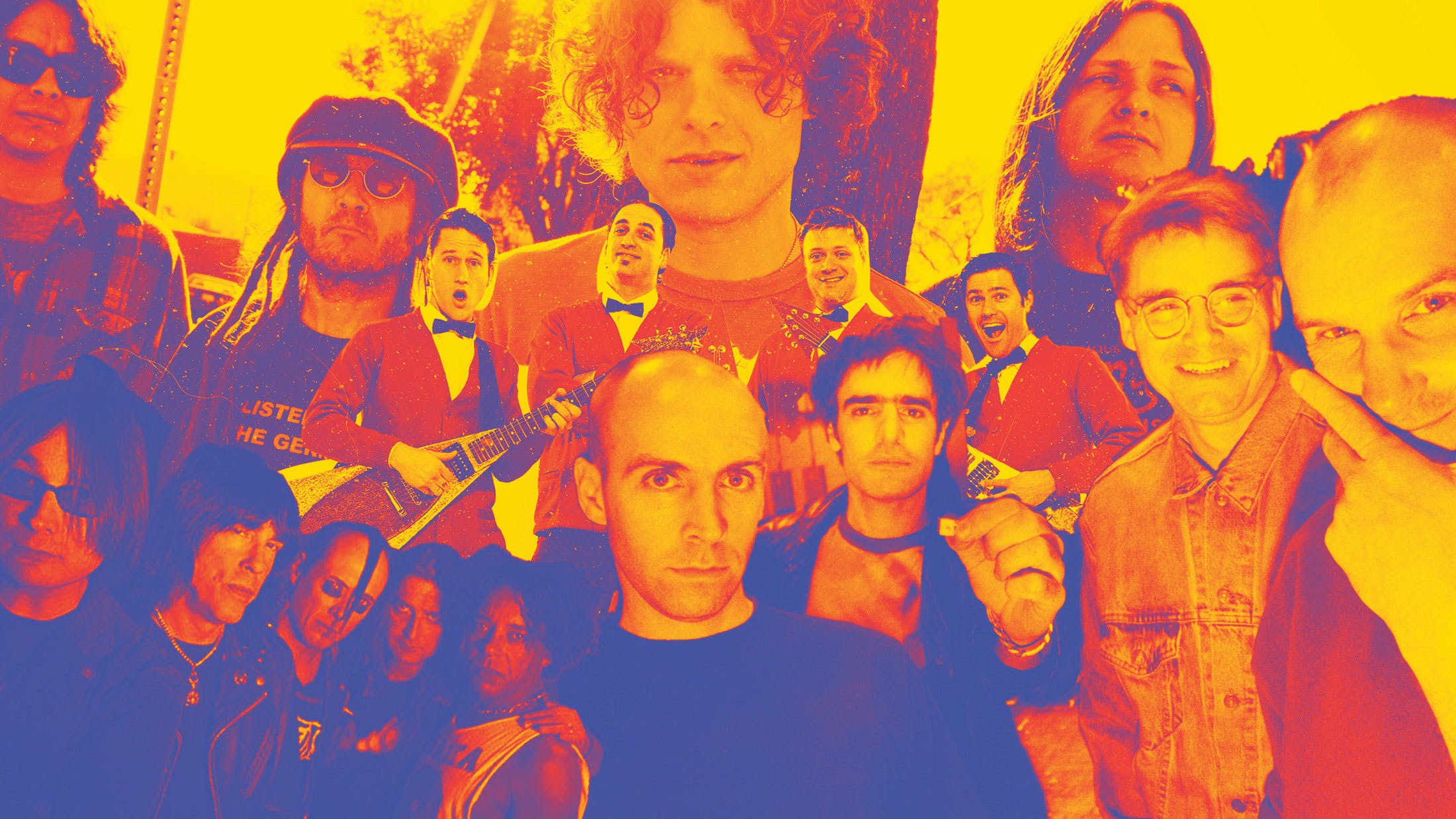 In early 2020, Fake Names – a band comprising past and present members of the likes of Refused, Minor Threat and Girls Against Boys – dropped their debut album, but they’re not the only big names from the world of punk to come together and form something new.

Supergroups can frequently be exercises in ego and indulgence. They can also be maelstroms of creativity and sometimes… sometimes they’re just a bit of a laugh. We’ll let you decide which is which as we present 13 of the best punk supergroups for your delectation.

We’ll start here as it’s bang up to date with their self-titled debut coming out on Epitaph last May. The line-up features Brian Baker (Minor Threat, Bad Religion), Michael Hampton (S.O.A., Embrace), Dennis Lyxzén (Refused, International Noise Conspiracy) and Johnny Temple (Girls Against Boys, Soulside). That’s quite a pedigree and it all culminates in a riot of melodic punk Molotovs.

We’ll stick with Brian Baker for a second because no-one has a more illustrious pedigree – as well as Minor Threat and Bad Religion he’s played bass and/or guitar in Dag Nasty, Samhain, The Meatmen and more. In 2018 he also put out an EP with Beach Rats – a band featuring members of Bouncing Souls and vocalist Ari Katz, formerly of much-loved ’90s New Jersey punks Lifetime. We’re not sure if they’re still active but the raucous, Descendents-y EP rules.

The Falcon describe themselves on their social media as ‘the goddamn Voltron of an obscure subculture’ and if they want to make comparisons to giant super-robots, we’re not going to argue. As well as members of The Lawrence Arms (Brendan Kelly and Neil Hennessy) we have Dan Andriano from the Alkaline Trio and punk rock singer-songwriter Dave Hause. And in this case the whole is – at the very least – equal to the sum of its not inconsiderable parts.

Me First And The Gimme Gimmes

A punk rock supergroup and the ultimate party covers band, you say? Step right this way. The core of this top-notch dick-about comprises Spike Slawson (Swingin’ Utters), Fat Mike (NOFX), Joey Cape and Dave Raun (both Lagwagons) and Foo Fighters/No Use For A Name guitarist Dave Raun also used to be a regular member. They’ve had numerous other punk luminaries join them live and have covered everything from country to showtunes and pop and rock classics. Come in, pour a drink and prepare to have a ball.

‘They’re happy because they eat lard,’ declared adult comic Viz on one classic T-shirt design. Slather some in your ears as well and you’ll be ecstatic – as long as you’re a fan of violently noise-drenched, politically-charged industrial hardcore punk. And if you’re not, what’s wrong with you? Lard were basically Ministry with former Dead Kennedys frontman Jello Biafra on vocals and were exactly as awesome as that pairing implies. They haven’t released anything since 2000 but Al Jourgensen has mentioned a possible resurrection and we live in hope.

Armstrongs' Tim Timebomb project features a revolving door of musicians that is perhaps slightly too loose to be termed a supergroup. Another intriguing collaboration saw the frontman team up with Green Day’s Billie Joe Armstrong (no relation) and his son Joey (SWMRS), as well as Tim’s nephew Rey. So far it’s only resulted in one release, If There Ever Was A Time, all profits from which went to legendary punk venue 924 Gilman Street, where both Rancid and Green Day cut their teeth.

Love punk? A fan of Sailor Moon and, uh, breakfast cereals? Then have we got a supergroup for you. Music documentary director John Cafiero put the band together to indulge his passion for punk rock and Japanese anime, recruiting the likes of Jerry Only (Misfits), Dez Cadena (Black Flag) and Marky Ramone (Ramones). They’ve released a slew of singles, but their only full-length to date is the suitably titled and reasonably bonkers Osaka Popstar And The American Legends Of Punk from 2006.

When the Sex Pistols collapsed, guitarist Steve Jones and drummer Paul Cook tried teaming up with Sham 69 vocalist Jimmy Pursey and bassist Dave Tregunna. They never officially had a name, as the band never imploded in the studio, but the fan-adopted Sham Pistols was as good as any and some bootleg recordings did finally emerge. Cook and Jones’ subsequent post-Pistols outfit The Professionals reconvened more recently. 2017 album What In The World featured the likes of Guns N' Roses' Duff McKagan and The Clash’s Mick Jones, although these were more guest appearances than a ‘proper’ supergroup.

Punk rock? Well this certainly isn’t the Ramones. But if you count the most vicious, chaotic hardcore as the far end of the spectrum, END qualify as one of the very finest punk supergroups out there. Featuring Counterparts frontman Brendan Murphy and Fit For An Autopsy guitarist Will Putney, along with members and alumni from Shai Hulud and Reign Supreme, this is a side-project that took on a fearsome life of its own.

Staying on the hardcore side, we also have Dead Cross. Mike Patton is no stranger to supergroups of course – see the likes of Fantomas and Tomahawk for proof - but Dead Cross are a more straightforward proposition than we’re used to from the Faith No More frontman. Legendary drummer Dave Lombardo told Rolling Stone: "The album is only 28 minutes long. And the funny thing is [Slayer's] Reign In Blood was 29 minutes. This album carries so much anger and frustration. You hear it in my drumming. It was the perfect birth of a hardcore album. It's one of the most brutal albums I've ever done." The band also features bassist Justin Pearson (The Locust) and guitarist Michael Crain (Retox).

Turning the aggression way down we have rationale., a band formed by Knuckle Puck's Joe Taylor and Ryan Rumchaks, along with Real Friends frontman Dan Lambton. Fittingly they are all, ahem, real friends who decided to do a side-project together, allowing them to channel songs and vibes that weren’t quite right for the day-job bands. It’s still broadly in the pop-punk arena though, as you can check on their excellently-titled 2019 full-length You Are Flawed, But You’ll Be Fine.

Minor Threat and Rites Of Spring were two of the most influential acts of the 1980s, having helped birth hardcore and emocore – modern emo’s harder, uglier forebear - respectively. You might think those bands would be hard to top in terms of sheer influence but Fugazi arguably managed it. Founded by former Minor Threat frontman Ian MacKaye, the band also featured Guy Picciotto (vocals/guitar) and Brendan Canty (drums) from Rites Of Spring, with former Dag Nasty drummer Colin Sears involved in an early incarnation. The band had an enduring musical impact on pretty much every post-hardcore band to come, while their DIY, anti-music biz stance set out a whole new way for bands to operate.

OFF! is a hardcore supergroup featuring former Black Flag/Circle Jerks vocalist Keith Morris, Burning Brides frontman Dimitri Coats, Redd Kross bassist Steven Shane McDonald and Rocket From The Crypt drummer Mario Rubalcaba. They’ve released three splendidly rampant albums already but nothing as mad as the upcoming Watermelon, a mooted album/sci-fi comedy rockumentary. “In an attempt to conquer his diabetes-induced erectile dysfunction, Keith Morris comes across a mind-altering medication extracted from mysterious watermelons,” goes their sell on the film. “The drug not only restores his virility, it also gives him the ability to travel through space and time, prompting him to offer it to the rest of the group as a solution to their problems. When they turn to music, the group discovers a new experimental approach which not only redefines punk, but also becomes an underground movement.” Guys, you had us at ‘diabetes-induced erectile dysfunction’.