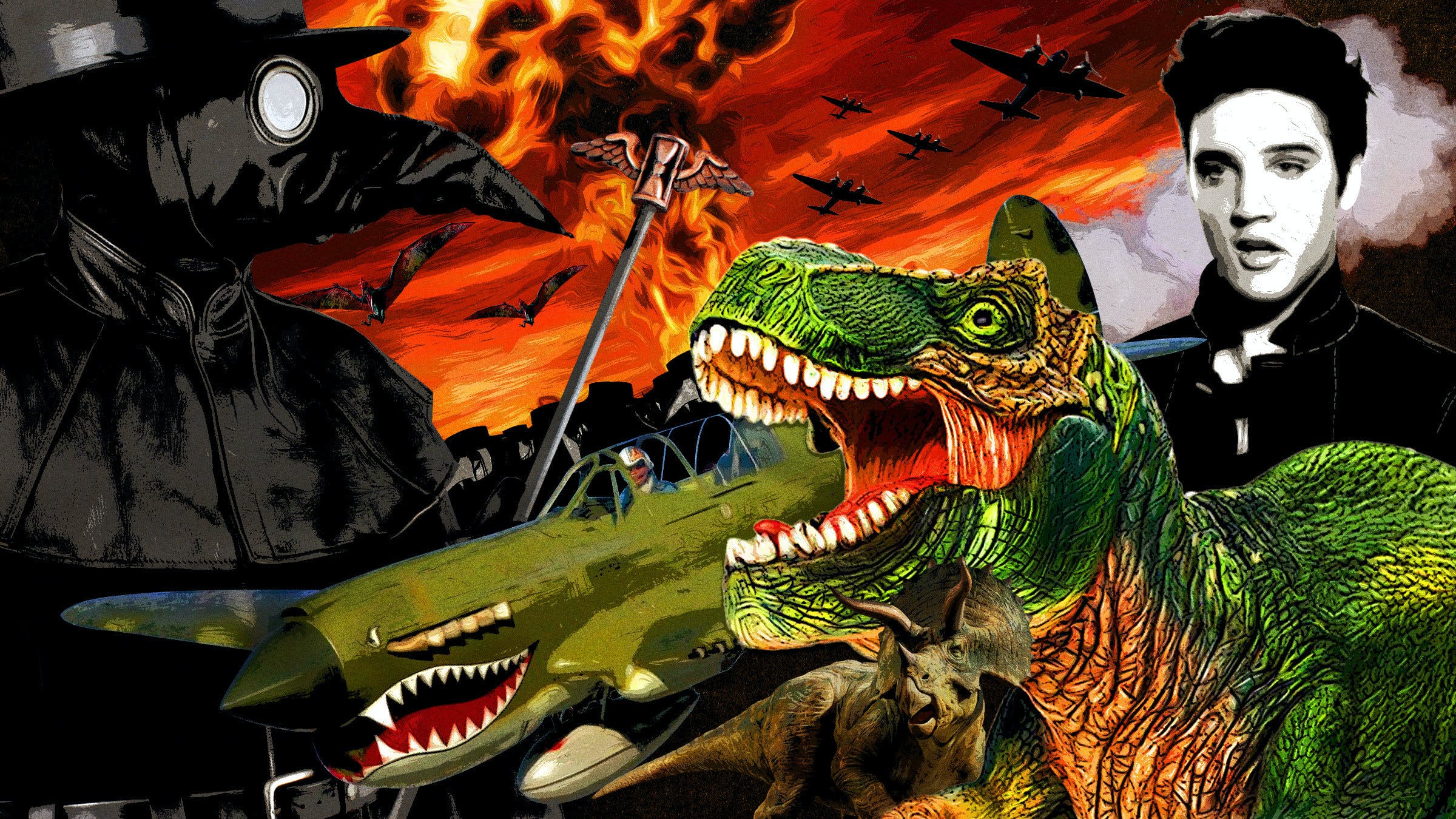 History is, all things considered, pretty metal. From the moment the cosmos exploded into existence to last Friday’s album releases, the whole of the world’s combined past has been huge, angry, and loud as hell. Even those pits stops on the timeline of creation before humanity showed up are awesome in their elaborate scale, even comparable to seeing Iron Maiden live. To put it simply, the universe was not created by the Big Twang.

When it comes to defining heavy metal’s sound, imagery, and mindset, however, certain historical moments jump out at you. These are moments that impacted heavy metal’s understanding of the world around it, whether they occurred millions of years ago or during rock’n’roll’s fledgling years. And while much of metal’s lyrical content concerns itself with myth, legend, religion, and superstitions we find all over the world, it’s these actual moments in the chronicle of human life that have made metal the terrifying beast we know and love. Not all of them are especially cool or fun events -- but then again, if things were always nice and peaceful, there would be no metal.

Here are 13 of the most metal moments in world history.

The extinction of the dinosaurs - 65 Million BC

Total death! The dinosaurs themselves were certainly metal as fuck, being giant lizards that dominated a volcano-strewn wasteland for millions of years and providing bands with inspiration for the giant, horrific monsters that could appear on their album art. But even more metal was the fact that they all died in a relatively short period of time. Not only did this illustrate the inevitability of time, but it introduced mankind to a concept that black and death metal bands adore: global extinction. Every time a group of dudes in corpse paint write about the world being wiped clean of all life, you have a dying Diplodocus to thank for it.

Alexander The Great burns Persepolis - 330 BC

Overall, Alexander The Great seems like a real asshole. In 330 BC, after conquering a large portion of the modern world, he headed to Persepolis, the capital of the First Persian Empire, and burned it down, destroying with it countless texts of ancient knowledge and most of the holy books of Zoroastrianism. And yet, there's something metalheads can appreciate here -- both in the brutal, epic imagery of a dude going to a massive city and deciding to wipe it out because it's not all about him, and in the idea that there's always going to be some jock who shows up and ruins everything for those people who don't want to live like them. There's always some dickhead.

Dragons, monsters, vials of poison, avenging angels, the end of the world -- the Book Of Revelations, written by the mysterious John of Patmos, is one hell of a way to end the New Testament. Sure, the book concludes with Christ coming back and initiating the Rapture -- and the whole thing was probably written as a spiteful condemnation of the Roman Emperor Nero -- but what metalheads (and fundamentalist preachers) remember most are its more insane, apocalyptic sections. Most of all, it introduced the world to two of metal’s favorite concepts: 666, the number of the beast; and the Four Horsemen. Sounds like the beginning of a killer playlist.

What’s more brutal than the demise of over a third of Europe? When it happens in less than ten years. From approximately 1346 to 1353, the bubonic plague swept across the western world, killing around 200 million people. This gave birth to the artistic concept of the Danse Macabre, a celebration of morbidity that reveled in the fact that everyone -- peasant, pope, or king -- was the same in the eyes of the Reaper. This sense of the plague’s gravity and equality in death can be seen all throughout the world of metal, from Gojira’s album title The Way Of All Flesh to the black metal band 1349, whose name references the year a rat- and corpse-filled ship drifted into Bergen’s harbor and brought the plague to Norway.

The Spanish Inquisition is formed - 1478 AD

In the late 1400s, the Catholic church in Spain decided it needed to step its persecution game up due to all the sorcerers and heretics who’d inspired God to cause the Black Death and the Dark Ages (obviously). The result was The Tribunal of the Holy Office of the Inquisition, AKA the Spanish Inquisition, lead by the brutal friar Tomas de Torquemada, an organization meant to convert Jews and Muslims to Catholicism. What it actually did was lead a pan-European torture campaign that shocked the world with its rabid and efficient sadism. Not only did this ignorant hunting of peaceful non-Christians inform metal’s severe distrust of the church, but the variety of torture and execution methods used during the Inquisition gave death metal bands a whole new world of historical horror to pull from.

John Milton’s Paradise Lost wasn’t the first book to involve Satan as a character, but it was certainly the one with the most sympathetic depiction of him. So much of the ideas and imagery behind metal's modern Lucifer -- a fallen angel of light, the unshakeable pride that drives him to reign in hell before he’ll serve in Heaven, leading his rebellious brothers to hold demonic parliament in Hell -- comes directly from Milton’s epic poem. On top of that, Milton wrote his epic tale after getting married, and when he got divorced penned Paradise Regained, so even your everyday metal fan can relate to literature’s most romantic satanist.

At the end of the day, metal’s sinister side isn’t about the glory of Satan so much as a reaction to the mania of those hell-bent on defeating him. The witch trials in Salem, Massachusetts, in which dozens of innocent people were ruthlessly tortured and executed for supposedly consorting with the Devil, are one of the most glaring examples of how fighting evil begets evil. That Puritan viciousness taught metal fans that the true villains of the story are often the moral soldiers leading the reform. Of course, what the American witch-hunters didn’t realize was that the imagery and superstitions they conjured up were also incredibly cool, so that the illustrations from their witch-hunting manuals would adorn countless satanic album covers. Thanks, guys!

The American Civil War was unspeakably brutal on a horrifying ground level, a massive conflict that existed long before the advent of most modern military technology. As such, it was a mess -- gore-drenched and tangible, riddled with infection, disease, and unspeakable trauma. Its peak was the Battle Of Gettysburg, the single deadliest battle of the conflict, with approximately 51,000 souls meeting their end on the soil of Pennsylvania. That mixture of military legend and raw, fleshy physicality is an important part of metal’s regard for war, and that mixture of historical bombast and honest horror is something that bands like Slayer, Jungle Rot, and Bolt Thrower have utilized to a terrifying degree.

The advent of the commercially-available electric guitar - 1931 AD

By the 1930s, the desire for electrically-amplified instruments could be felt all throughout the music world. But it was George Beauchamp and Paul Barth of the National Guitar Corporation who gave the world its first commercially-available electrically-amplified guitar in 1931. This aluminum instrument, nicknamed the “frying pan” -- because it looked like a frying pan -- was a mainstream success; the company, meanwhile, renamed in 1934, becoming the Rickenbacker Electro Stringed Instrument Company. Of course, had George and Paul been able to predict the roaring guitars of Cannibal Corpse, they might have thought twice about unleashing this Pandora’s box of riffs upon the world.

World War II was massively influential on heavy metal across the board, but the Blitz might be where it most informed the genre’s development. The bombing of London not only involved Western Europe’s two greatest empires clashing in a rain of fire, but it also showed Londoners how one of the world’s jewel cities can be brought low. This sense of apocalyptic bummer echoed throughout England for decades, especially in the industry-choked hopelessness of Black Sabbath.

Compared to many of the other events on this list, Elvis shaking his pelvis might seem a little light-hearted for metal. But one must remember that to America’s God-fearing Bible-thumping parents, Presley’s swingin’ hips were a sign of the endtimes, the breaking of a moral dam that would drown the world in dry-humping. Not only did Elvis show the world’s youth that rock music was all about wanton gyration, he also cemented the idea that parents would always be aghast about it -- which is, honestly, part of what makes it cool. Any kid who’s rolled their eyes while their folks gasped at an Excrementaory Grindfuckers album has Elvis the Pelvis to thank for it.

The Vietnam War was a huge inspiration on metal, the sheer bummer of its brutality and pointlessness inspiring much of the ‘70s biker movement. But technically, Vietnam started in the mid-’50s, and honestly, the war is more often more associated with folk music than metal. But the images that emerged in 1965, as the U.S. government began bathing the country in flaming napalm and the toxic herbicide Agent Orange, were what scarred visions of state-sponsored hellfire into the minds of many vets, and gave folks back home an eyeful of the pure destructive horror of the war. The result: a massive lack of trust in the government, and a realization that the end of the world might be our own doing. As Black Sabbath put it in Hand Of Good, “First, it was the bomb...Vietnam napalm…”

When the deranged ‘family’ of charalatan and failed rock star Charles Manson killed five people in August of 1969, they gave credence to the time-honored newspaper saying, ‘If it bleeds, it leads.’ The Manson Family Murders became the ultimate media circus, thrusting the madness lurking beneath the Summer Of Love’s surface into the face of mainstream America. More so, the slayings showed the dark side of rock’n’roll, adding a sense of brutal downer and shock value to what had become music for chilling out and smoking weed. For a generation of musicians, this was the dawn of the kvlt of personality, and gave them a repulsive yet fascinating figure on which to base their insane onstage personae.