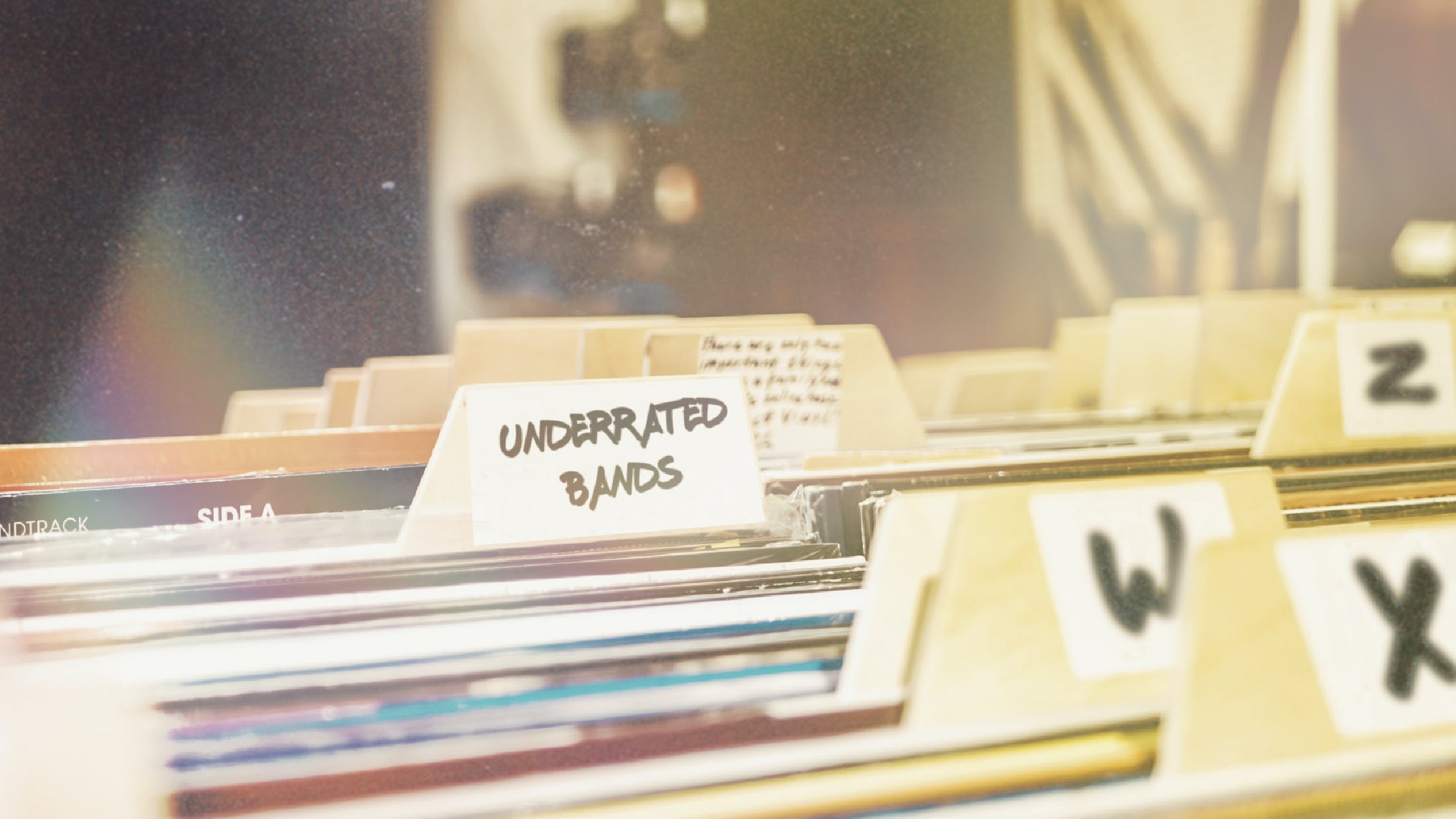 In the world of rock, sadly not everyone gets their dues the first time around – sometimes it just takes people a little while to recognise true greatness. With that in mind, here are 20 examples of bands whose legacy deserves another examination. And, on behalf of the music community, we apologise for our tardiness…

This Tacoma, Washington quartet's stock-in-trade was a ruthlessly dissonant blend of metal, hardcore and unconventional time signatures; they released just two full-length albums and a handful of EPs before internal tensions drove them apart in 2002. Their second album, We Are The Romans, remains a touchstone of the mathcore genre some two decades after its release.

The Nation Of Ulysses

According to a tongue-in-cheek post on their label Dischord’s site, The Nation Of Ulysses was “a violent separatist political party and terrorist group operating out of Washington, D.C. in the early 1990s”. In reality, they were a sharply-dressed punk band whose two studio albums – 1991’s 13-Point Program to Destroy America and its 1992 follow-up, Plays Pretty For Baby – had a far-reaching, lasting influence on bands as far a field as Umeå in Sweden. They split in 1992.

This Kilkenny four-piece’s self-titled debut was the sound of a band finding its feet, but they truly came into their own with 1997’s On The Turn. However, Britpop meant that their fiery anthems were at odds with radio station playlists, and subsequently split after being dropped by their label. The band, who still tour occasionally, have influenced the likes of Biffy Clyro, Frank Turner and Jamie Lenman.

Not to be confused with the Connecticut band of the same name, this quirky indie rock quartet released three albums in the '90s: Down-Lift the Up-Trodden, When Animals Attack, and Sub-Lingual. The Derby-based act parted ways in 1999 following a legal dispute with a former manager, but reunited briefly in 2012 to tour with Hundred Reasons and Hell Is For Heroes.

This Doncaster trio boasted a live reputation that many bands would sell their own legs for. The band built a loyal fanbase following tours with the likes of Motörhead and Therapy?, and released two albums – Half Nelson and Every Six Seconds, both earning 5K reviews if memory serves – before calling it a day in late 2001.

This criminally underrated Ayrshire band – led by JP Reid, aka Dragon – formed in 2002 and released their debut Random Acts Of Intimacy four years later. A formidable live act, they toured with Biffy Clyro, Oceansize, Reuben and Hell Is For Heroes, releasing a further three albums, their most recent being Fused in 2012. Reid’s latest project YesDragon’s latest album, Masquerade, is out now.

A pivotal band in the Swedish hardcore scene which birthed Refused and Randy, this quintet released five studio albums and an outtakes compilation during their career. It was 1995’s breakthrough album Do Not Tailgate which brought the band to Rick Rubin’s attention, who reissued the collection through his own American Recordings label. Despite a solid body of work, the band’s 2003 album, Get Shot, was to be their last.

Following the break-up of NYHC favourites Burn, frontman Chaka Malik formed Orange 9mm with guitarist Chris Traynor. This post-hardcore quartet released their self-titled EP on Revelation in 1994, but it was Driver Not Included which truly soared – an energetic, frantic full-length debut with serrated riffs and Malik’s fierce vocal delivery. The band parted ways in 2000, but an Instagram account was launched last year. Is a reunion on the cards?

This Glaswegian band released their debut, A Story In White, in 2001. With an expansive, ambitious sound veering from delicate to caustic, they released three further albums: Sleep And Release, Seclusion and the epic My Heart Has A Wish That You Would Not Go. The band called it a day in 2007, citing financial struggles and “an almost superhuman ability to dodge the zeitgeist” had taken their toll.

This Oslo band’s albums Calling In Dead (2000) and Ride Paranoia (2003) were exercises in furious, post-hardcore, but it was the release of their well-crafted 2005 Maelstrom that saw the band embrace a more dynamic approach to songwriting. They split the following year. A documentary, Repetition Is Failure: The Story Of JR Ewing, is currently in the works.

Forming in Washington DC, post-hardcore legends Jawbox released two albums through Ian MacKaye’s Dischord label before signing to Atlantic for the release of For Your Own Special Sweetheart in 1994. A self-titled effort followed two years later, before disbanding. The reunited quartet have recently completed a North American tour, with a further date scheduled in November.

These Seattle-based punks formed in 1996 and released their raw, swaggering self-titled debut the following year. Fusing garage rock, punk and vocalist Spencer Moody’s feral howl, the six-piece’s (seven, if you count roadie Gabe) irresistible, rough hewn anthems were collected on two further albums and the Thelema EP in 2001, before splitting. A series of one-off shows culminated in the release of The White Ghost Has Blood On Its Hands Again in 2014. Now a four-piece, the band tour North America sporadically.

These London-based pop punks formed in 1994, whose riotous shows earned a reputation as a must-see act. During their six-year career, they appeared on Top Of The Pops and supported Red Hot Chili Peppers, Foo Fighters, Deftones and Metallica. Following the release of their full-length album On The Outside, the band split in 2000, citing musical differences. Guitarist Will McGonagle and drummer Joe Birch went on to form Hell Is For Heroes.

Hailing from Manchester, this five-piece released their debut Effloresce in 2003. With sonic ideas changing as often as the British weather, the band’s expansive, complex arrangements and compelling musicianship earned a loyal following. Cue, then, mass heartbreak when they called it a day in early 2011. While working their own musical projects, frontman Mike Vennart and guitarist/keyboardist Richard ‘Gambler’ Ingram are now touring members of Biffy Clyro.

Naming themselves after a telly evangelist, these underground heroes were a Nottinghamshire-based band who formed in 1993 and split six years later. They released two EPs, a John Peel session, and two albums, including the still-stunning The Leading Hotels Of The World. Bob Tilton, we hardly knew ye.

Why was the sand cross? Because the seaweed. Anwyay. Like Botch, this punk grunge quintet formed in Tacoma, Washington and released five albums throughout the 1990s. Their video for Kid Candy appeared on an episode of MTV tastemaker show Beavis And Butt-Head, while their cover of Fleetwood Mac’s Go Your Own Way featured on the Clerks soundtrack. Despite a string of critically acclaimed releases, they called it quits after touring in support of 1998’s Actions and Indications and played a handful of dates in 2011. Frontman Aaron Stauffer now works as an ER nurse in California.

This British band’s mix of metal, indie and gender politics captured the attention of Henry Rollins, who released their 1995 album Son Of Filth through his Human Pitbull imprint via London Records. “All I hear is the awesome potential for their future work. I hope they remember me when I’m mowing their lawns.” The band made an appearance in the Pamela Anderson film, Barb Wire and contributed a cover of the Patti Smith song, Dancing Barefoot, to its soundtrack.

With a clever use of a punctuation mark, this Staten Island metal band took an engine component and conjured up something altogether more murky. Frontman Henry Font and bassist/vocalist Val.Ium (not her real name) were the propelling force behind their two albums: 1996’s Number One and its 1999 follow-up, $ell.out. Although they were something of a semi-regular fixture in the pages of K! and signed to a major label, they never quite reached the heights of their contemporaries. The band dissolved in 2001, but re-emerged some 14 years later.

This New York act were only active for two years, but left an indelible mark on the '90s screamo scene. After their self-titled debut and EPs went out of print, Touché Amoré vocalist Jeremy Bolm repaid their influence on his band by releasing the back catalogue as Collected through his own label Secret Voice. Their alumni went on to play in Hot Cross, Errortype: Eleven and Instruction.

This Welsh band were regarded as the fuzzed up, hirsute frontiersman of stoner metal in the UK. While they never achieved mainstream success, the band were firm favourites at Kerrang!, earning a Best Newcomer award. After parting ways in 2001, their members went on to cause aural damage with the likes of Iron Monkey, Dukes of Nothing and Black Eye Riot. Their album Tumuli Shroomaroom remains a perfect record to play while firing up that skull-shaped bong.