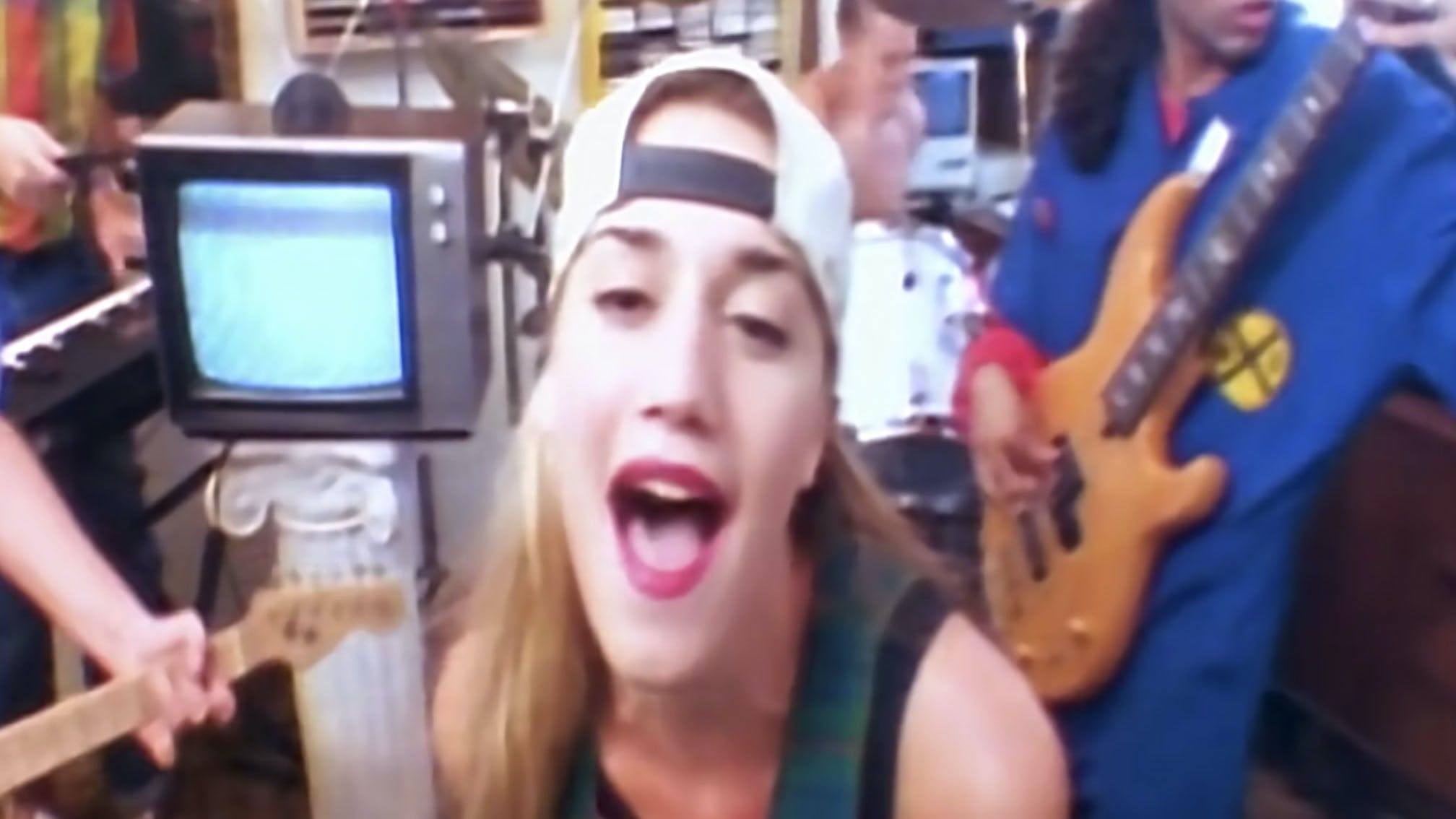 An alarmingly youthful Ant & Dec stare down the barrel of the camera.

“They’ve sold seven million albums in America,” gushes Dec. “They are the seventh Number One in seven weeks and they are on… Cloud 9.”

It had taken No Doubt an awfully long time to make it but, finally, in February 1997, here they were: on top of the UK charts, and indeed the world, with their power-ballad-to-end-all-power-ballads, Don’t Speak, taken from classic album Tragic Kingdom.

But even at this moment, just as they took hold of the ‘biggest band in the world right now’ baton, No Doubt’s underground roots were showing.

Certainly, that performance on the UK’s much-missed weekly chart rundown – delivered during a visit that also saw them play one of the most riotous, sweat-drenched gigs this writer has ever seen at the London Astoria, and star in a big Kerrang! feature – revealed a band that, stylistically, were all over the place.

Punky drummer Adrian Young wore electrical tape over his eyes and mouth. Robot-dancing bassist Tony Kanal sported huge headphones and even bigger bug shades, perhaps in a vain attempt to shut out the fact that the song’s lyrics are transparently about his still-raw break-up with singer Gwen Stefani. Guitarist Tom Dumont gleefully pretended to play the Spanish classical guitar solo on his very metal Flying V. Oh, and Gwen – with hair from Hollywood’s golden age and trousers from London’s punk era – displayed all the unique star quality that had made her such an outlier in Southern California’s scuzzy ska scene.

It was this eclectic mash-up of styles and influences that made No Doubt an inimitable proposition ever since they formed in Anaheim, California (home to Disneyland and not much else) back in 1986. But that unusual blend also meant many thought No Doubt would never break outside of their own backyard. For a scrappy suburban ska band to become massive was always going to be against the odds, but No Doubt also had to conquer cynicism, heartbreak and outright tragedy.

That journey to the top took its first significant steps 30 years ago this week, when No Doubt’s self-titled debut album was released. Not that many people noticed outside of SoCal, where the band ruled the Two-tone inspired parties that gripped Orange County’s youth in the late ’80s and early ’90s.

Recorded for just $15,000 and released on Interscope, No Doubt – stuffed with uncomplicated, upbeat anthems such as Trapped In A Box and Let’s Get Back – sold okay in California, but its joie-de-vivre clashed with the prevailing mood of grunge misery elsewhere. So much so, in fact, that hugely influential LA radio station KROQ reportedly declared it “would take an act of God to get this band on the radio”.

Gwen and her brother Eric, then the creative force behind the band, had a religious upbringing (the band couldn’t tour for years because of Gwen’s strict curfew), but they weren’t miracle workers. But then it was already a wonder that No Doubt were still together.

Because Gwen wasn’t always the band’s lead singer. Initially, she shared the role with livewire John Spence, whose backflips and charisma would fire up the mosh-pit as ND built a following in The Golden State. But in December 1987, John died by suicide, just days before a key record company showcase gig at the Roxy Theatre. The blindsided and devastated band considered disbanding, but ultimately decided to carry on. Gwen went it alone upfront and eventually shrugged off her innate shyness to embrace her inner superstar, making No Doubt an unusual proposition in the male-dominated scene.

Many gigs and several line-up changes later, the band’s legendarily rowdy live shows helped score that deal with Interscope. But the label wasn’t sure what to do with some ska kids from “the happiest place on earth” in the post-Nevermind world and, after the debut failed to catch fire, they were left in limbo.

The band members drifted back to college or got jobs but they weren’t ready to give up the dream just yet. Instead, they supported everyone from the Dave Matthews Band to Red Hot Chili Peppers and Public Enemy – an eclectic mix later reflected in 2001 genre-hopping classic Rock Steady – and powered up their expanded fanbase via innovative use of the internet.

The label greenlit a new record, but were unimpressed by the new songs. Frustrated by the stop-start sessions, lack of funding and curious producer choices, No Doubt went rogue, setting up a garage studio and recording songs old and new. Delays exasperated the band, but also allowed Tom and Tony to hone their songwriting skills and Gwen – whose crumbling relationship with Tony gave her plenty to write about – to step up as lyricist.

Eric, however, who had a successful side career as an illustrator for The Simpsons (he would later draw his former bandmates in the Homerpalooza episode), realised the band were moving away from his original, Specials-inspired vision, and announced he was leaving. Around the same time, Gwen and Tony split.

Once again, the end looked nigh. But instead, the band released The Beacon Street Collection on their own label. It captured a band in transition from ska scenesters to something more accessible, and sold considerably better than their debut.

It was enough to change their fortunes. No Doubt recorded Tragic Kingdom, the album that featured Eric’s final contributions and would break them all over the world, around the Beacon Street sessions. Interscope had shunted them off to an associated label, Trauma Records – also home to future Mr. Gwen Stefani, Gavin Rossdale’s band Bush – but their new home saw ND’s potential.

By the time Tragic Kingdom finally came out in October 1995, the script had flipped. After Kurt Cobain’s death the year before, Gwen’s natural positivity despite adversity – backed by irrepressible anthems such as Spiderwebs, Just A Girl and Sunday Morning – was suddenly exactly what alt-rock fans were looking for.

“As people, we’re angry,” she said as the album was released. “We went through some really bad times and our way of dealing with that is humour.”

Tragic Kingdom might not quite have qualified as an act of God, but it was sufficiently divine to convince KROQ – and a previously unsupportive MTV – to get behind the record and, as the band toured relentlessly, No Doubt gigs slowly-but-surely became packed with lookalike Gwenabees.

“Before, we were the nerd band from Orange County and people looked down on us because we were uncool and suburban and didn’t take drugs,” Gwen told Kerrang! as Don’t Speak took over the world. “People laughed at this kind of music when Nirvana were huge.”

Three decades on from their debut, no-one’s laughing at No Doubt’s legacy – although their music continues to put a smile on the face of over 6.5m listeners every month on Spotify. Tragic Kingdom became a ultra-rare Diamond album (10m U.S. copies sold) and, while 2000’s Return Of Saturn struggled to live up to its predecessor, Rock Steady cemented their legend, before Gwen embarked on a solo career that made her one of the most famous pop stars on earth.

Many assumed that was the end of No Doubt, but they reformed for one of 2009’s hottest tours and 2012’s Push And Shove album, their eclectic genius very much intact. They last played live in 2015 and – with The Voice star Gwen now as famous for her TV work as her old Top Of The Pops sparring partners Ant & Dec are – no-one seems to know whether the band might one day return.

But if and when they do, you can be sure of one thing: they’ll be doing it their way. No Doubt about it.

A deep dive into No Doubt’s video for Oi To The World!

A forensic analysis of No Doubt’s video for their cover of The Vandals 1996 classic.

Exclusive: Hear What No Doubt's Hella Good Sounds Like As Doom Metal