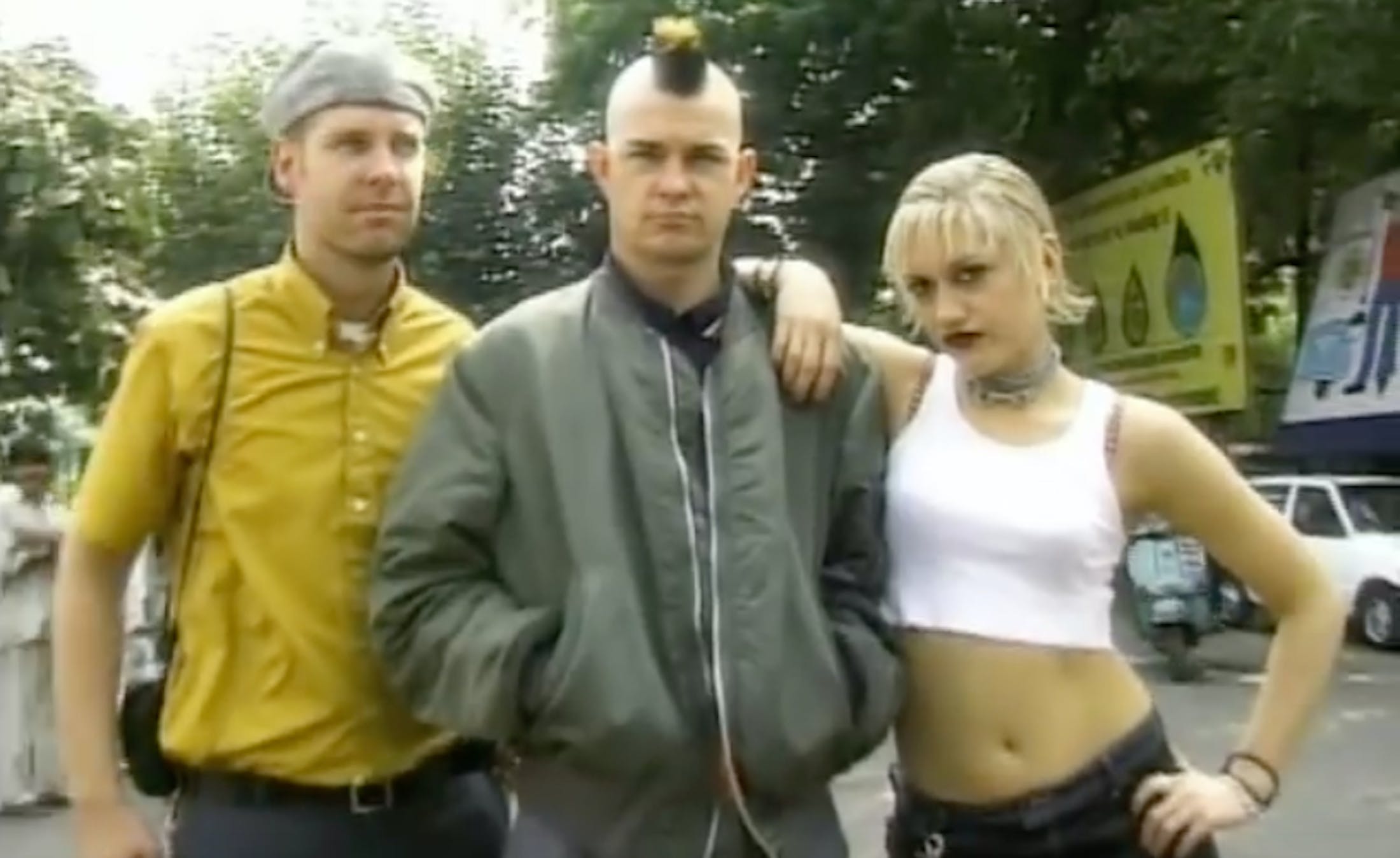 Not every band can write a Christmas classic, although plenty try.

Orange County ska-pop millionaires No Doubt decided to throw their Santa hat into the party ring with this 1997 cover of a track by local pals The Vandals. It was recorded for a compilation album, A Very Special Christmas 3, which benefited the Special Olympics and also featured Smashing Pumpkins, Chris Cornell and Patti Smith.

There’s plenty about it that doesn’t, on the surface, seem incredibly Christmassy. The video is shot in sun-soaked India, and concerns a really violent fight. The fight takes place on Christmas Day, though, so that’s vaguely festive. Also, 'oi' rhymes with 'joy'.

00:01
As opening shots go, Tony Kanal playing the bass on top of an elephant is pretty good. Hey viewers, it says, we’ve got an elephant. No Doubt were massive at this point – this video came out in 1997, when he band were on their two-year-plus tour promoting Tragic Kingdom, which sold sixteen million copies and made them (and Gwen Stefani even more so) into household names. And when you’re a household name, you get an elephant.

00:05
Speaking of Gwen, there she is, during her quite long bindi-wearing phase. The ’90s were a long time ago, and terms like “cultural appropriation” weren’t used as much, but if you’re a white Californian you probably shouldn’t wear a bindi.

00:07
No Doubt are one of those bands that have, like, tiers of membership. They’re a four-piece band but there’s six of them. The dudes at the back, Gabrial McNair and Stephen Bradley, are the equivalent of Jason White in Green Day – they’ve been in the band for something like 20 years, but aren’t quite in the band, even though they’re very much in the band. It’s confusing, it what it is.

00:08
There’s no way for these three people all be dressed appropriately for the weather. Either Gwen, wearing just a little top, is too cold, or drummer Adrian Young is too hot in his bomber jacket.

00:19
'Haji was a punk just like any other boy…' begins the song, originally performed by The Vandals and written by their bassist Joe Escalante. The original version has Vandals singer Dave Quackenbush dropping his Rs and doing a Californian attempt at a British accent, in the same tradition as Tim Armstrong and Tom DeLonge, the thing that once led Billie Joe Armstrong to describe himself as “an American guy faking an English accent faking an American accent”. So this is a song by an American man about an English man with an Indian name, originally sung by another American man doing an English accent, now sung by an American woman in India dressed as an Indian woman. Phew! Incidentally the Vandals also wrote one of the greatest Christmas songs ever, the heartbreaking Hang Myself From The Tree.

00:24
There’s sort of a plot to this video, it’s just paper-thin and kind of rubbishly done? One half of the band (singer Gwen Stefani, guitarist Tom Dumont and drummer Adrian Young) feud for some reason with the other half (bassist Tony Kamal, trombonist Gabrial MacNair and trumpeter Stephen Bradley), and after a pursuit, then get in a fight, then see the error of their ways thanks to a message from the sky. It’s interspersed with footage of them all having a lovely time playing in a band together though, and commitment to the characters in the fight plot seems minimal at best. They got changed for it, at least, although Gwen Stefani is wearing a really similar top (although has a different hairdo), and it’s just, honestly, not greatly done. Sorry, No Doubt.

00:32
'Popped in for a pint and to nick a bag of crisps' is not something you generally expect to hear Gwen Stefani say.

00:52
You don’t see the whole “evade pursuers by standing perfectly still next to some mannequins” move much these days, which is a shame as it’s a doozy.

00:59
So, a fight’s been arranged for Christmas Day, on the roof, at 20 Oxford Street. Yeah, 20 Oxford Street, the most “I am in a Californian band and trying to think of a British address” address conceivable. That’s the big Primark by Tottenham Court Road station. If, after a pub-based fracas, someone suggested you meet up at a later date – Christmas Day – to have a more serious fight on top of the big Primark by Tottenham Court Road station, you’d laugh at them. On top of Primark? Fuck off!

1:10
Every band coming out of California at the same time as No Doubt had a wacky, frequently nude member. Green Day had pyromaniac drummer Tré Cool. The Vandals had perpetually nude guitarist Warren Fitzgerald. And No Doubt have mohawked, clothes-phobic Adrian Young.

1:13
There are about one and a half million auto rickshaws in India.

1:46
Sometimes you see videos that are so polished, with Hollywood budgets and stunt performers and CGI, and you think, “Wouldn’t it be better if it was a bit rougher around the edges, a bit lower-budget, felt a bit more authentic?” This fight scene, which is not good, proves that impulse wrong.

1:53
That Indiana Jones line is not a highlight of anyone involved’s career. Writer Joe Escalante, singer Gwen Stefani and archaeologist Indiana Jones are all much better than that bad, bad line.

2:09
In a way, it’s impressive for such a huge band to put out a video with special effects that look like they were done on a Game Gear.

2:38
There you have it. It’s not one of No Doubt’s best, and the video is more of a “what we did on our holidays” edit than anything else, but at least it looks like their holidays were fun, and they’re all pals, and that’s what Christmas is all about, right? Undoubtedly!

30 years of No Doubt: How a scrappy suburban ska band took over the world

As No Doubt’s self-titled debut turns 30 years old, we look back at how the band successfully fought the odds to become a genuinely massive proposition.

Exclusive: Hear What No Doubt's Hella Good Sounds Like As Doom Metal