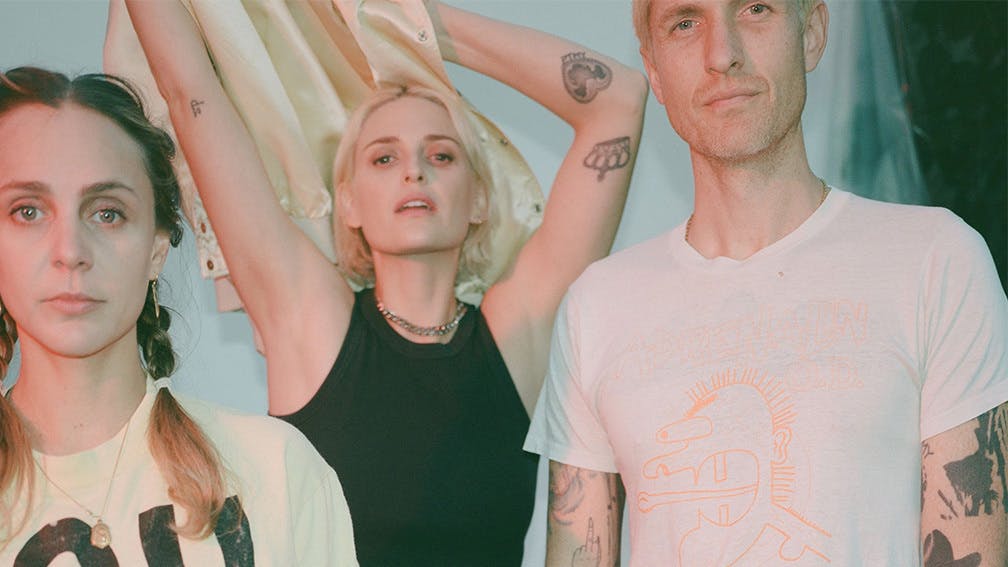 Sometimes you discover a group of artists where it just doesn’t compute that they’re not already massive. Dead Sara are one of those bands. Combining the widescreen ’70s rock influence of legends like Led Zeppelin and Fleetwood Mac with the raw grit and spiky righteousness of the ’90s grunge and riot grrrl movements – then adding just a splash of modernity to the mix – theirs are the kind of songs that can get radio airplay without needing to revert to beige modern formula. In Emily Armstrong they have a complex, intelligent frontwoman, who’s been jamming with guitarist Siouxsie Medley since their mid-teens in the early 2000s. Drummer Sean Friday completed the line-up in 2009. But, though 2012 single Weatherman delivered a real breakthrough, they’ve had to fight for every onward inch.

With last year’s brilliant third album Ain’t It Tragic and this month’s UK return for sold-out shows at London’s Old Blue Last and Signature Brew, as well as a slot at Brighton’s The Great Escape festival, however, it feels like business is finally picking up. Joining Emily on a day off from tour in Milan, she explains why it’s time for Dead Sara to take the limelight they deserve…

1They rep the real Los Angeles

Plenty of bands are ‘from’ Los Angeles, but precious few are made entirely of members born and bred in the City Of Angels. With all three members of Dead Sara having having grown up under those sparkling lights, they’re uniquely well-equipped to strip away the fame-hungry bullshit and reflect back the city’s real Southern Californian cool.

“It’s funny,” Emily begins. “Back when we were starting out with Weatherman as our first single, we’d get asked about all of us being from LA a lot, and just be like ‘I dunno. This is all we know.’ As we toured with and befriended more and more bands, though, we learned that they all had a pride about where they were from. Nowadays, when I’m asked that, I say that our music has a lot to do with LA because we are LA. It’s a cliché, but you do see a lot of people who come to the city, and they completely change. Then they burn out and go right back home. It’s a very sunny and beautiful place, but there is that darkness to it – that brutal side of things. That leads to a fake feel, sometimes, where you’ll go on a night out and it’s like everyone’s a B-actor trying to be discovered. You’re like, ‘Am I on set?!’ But when you really look at it, those people aren’t even from LA. Real LA people are more chill. I hope that we represent the real LA!”

2Their inspiration comes from the best of the best

From that band name to the more epic elements of their sound, Dead Sara aren’t afraid to refer back to the giants of hard rock’s past, drawing on everyone from Hole to Nirvana to Led Zeppelin for their timelessly electric sound. Frequently listing the great Stevie Nicks as one of their heroes, Fleetwood Mac hold a special place in their hearts.

“Siouxsie and I used to listen to records backwards, and get into the conspiracy theories and urban legends like The Beatles’ ‘Paul is dead’ stuff [a bizarre rumour that Paul McCartney died on November 9, 1966 and was replaced by a lookalike, to which the band were dropping hints in their songs]. One of the theories was about the song Sara by Fleetwood Mac, that that they sing ‘Dead Sara’ in the song. We were just young teenagers, and I remember that we texted each other at almost exactly the same time saying, ‘The band name should be Dead Sara!’

“Why do we love Fleetwood Mac so much? It’s about the songs, honestly. You listen to the song, think, ‘This is a nice song!’, then, as a musician, you go into how they wrote the song. Then it’s like ‘Wait, they engineered this?’ or ‘They produced this themselves?!’ You just get geeky. There was something about them in particular, their history, and how they could never miss. I miss that time when you found bands and you were just able to get obsessive and learn so much about them. They’re just one of the bands I got obsessed with, including Led Zeppelin, a lot of the other ’60s and ’70s rock bands, and a lot of obscure folk stuff, too. I still do obsess over that stuff sometimes.

“From a musical perspective, it’d be very cool for fans to be able to obsess over us in a similar way. Dead Sara is an entity, not any one person, and we’ve been together for a long time. A fan might find one song [they really connect with] on Ain’t It Tragic, then they could look back and see all the other records we’ve put out. I would love that.”

3They’ve been around the block, getting better every step of the way

Some bands burn bright and fast, but some smoulder away for years before getting their dues. With 2012’s self-titled debut LP and 2015 follow-up Pleasure To Meet you already in their pockets alongside last year’s Ain’t It Easy – as well as the 2008 Airport Sessions EP (remastered in 2016) and 2018’s six-track Temporary Things Taking Up Space – Dead Sara have plenty of miles on the clock. Between learning the real workings of life in a band and seeing tastes rotate back round to their raw rock’n’roll sound, that experience is no bad thing.

“It was harder to stay in the moment of things when we were younger,” reckons Emily. “You can get too ahead of yourself or struggle to process it when things are going fast – or slow. Eventually, you learn that there is [an ebb and flow], a give and take with the industry. You have to learn to take things that are personal, and things that are just to do with work, and maintain the separation between them as much as you can. The more that we’ve been in this industry and done things on our own – like how we released our first two albums on our own label – you develop this thick skin. The more that we grow as a band, becoming more like a family, you learn that you have to drop the ego as much as possible, to get along, to keep moving, and to get deeper into the music. Plus, you learn not to take things so seriously…

“I do think time has allowed tastes to cycle back around to our sound, too. When Weatherman came out, it felt like it rode the last [of a wave of that sort of music]. Unfortunately, that was our first single. We thought it was all going to be like Weatherman – that ’90s, classic hard rock vibe – but music changed so quickly. It felt like everyone had became a bubblegum-pop version of a rock band. We were like, ‘Shit, this is not who we are.’ But we kept going at it because we love what we do. Things have definitely [picked up] in the last couple of years. We’re on tour in Europe for the first time ever. And despite having only been in the UK twice before, never having headlined, we’ve sold out two shows in London. That should show you something!”

4Ain’t It Tragic is the sound of them roaring back

Six years on from their last full album, it felt like Dead Sara needed a spark to kickstart their momentum and creativity. Then COVID happened. Seeing all of the buzz and bullshit of their lives in music drop away, with their diaries opening up for months on end, finally afforded them the space to do things they’d always wanted to do. From glowing opener Starry Eyed via pounding singles Heroes and Hands Up to a stand-out closing salvo of Uninspired and Losing My Mind, the resultant set of songs feels like their most definitive statement to date.

“We were supposed to go into the studio right before shutdown,” Emily reflects. “After that, it was just kind of like, ‘Wow!’ You couldn’t help but have a completely different mindset about life in general. We all felt that. Your mind just goes to a deeper, darker place, but, at the same time, we had the magic of this cathartic outlet. Everything in that time helped paint a picture: a bit of [fear], our frustration at the world, then my own personal struggles with depression and more personal things. But it all kind of came together in this year or two where we came to some kind of clarity. We began to see the light at the end of the tunnel while we were in it, like being in a sensory deprivation camber, or a therapy session where you’re just going deep-deep-deep. Then you’re at the other end and it’s like, ‘Holy shit! We did that!’

“And we had to do it all ourselves. We’d always wanted to work that way: just take the reins and do an album on our own. Warner were very supportive, just like, ‘Whatever you guys are doing sounds great. We’ll just get you whatever you need to record.’ We were like kids in a candy store. Obviously, it was really scary, but you didn’t really have time to think, ‘Wow, we’re doing this.’ You just had to get out there and do it.”

Dead Sara’s brand of stripped down hard rock is exactly the type that feels most electrifying in the live arena. Currently in the groove supporting Eagles Of Death Metal on the continent, they’re pumped to get back to the UK for those first ever headline shows so that British fans can find out what they’re really all about...

“I don’t know how to say it without sounding emo, but we play hard rock with an emotional side,” Emily nods. “It’s me yelling at you, but it’s not just me yelling for no reason. It can get to your heartstrings at the same time! All of us, as musicians, always go for it, one-hundred per cent, in whatever we do. We never half-ass it. We go full-throttle. It ends up being very loud. The reason I started screaming in the band was because, before I did, everyone was playing so loud, with all our hearts, that I couldn’t hear myself. We found our sound in that way, and that’s at our core. I think that’s what people connect with!

Dead Sara’s latest album Ain’t It Tragic is out now via Warner. They will tour the UK May 12 – 16.