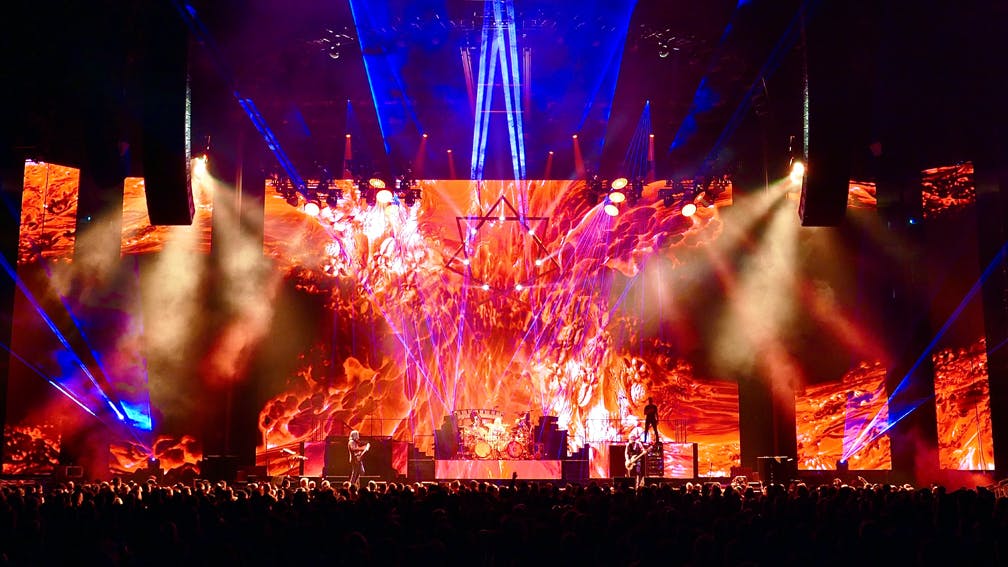 This month, Tool hit the UK for their first tour on these shores in over a decade. You went, so you know it was awesome. Though each show had its own little bits of its own, there were some solid universal truths as well. Having had heads fried across several gigs on the run, here's what we learned…

The threat is real: get spotted using your phone while Tool are playing and you run the risk of being ejected. Not a rule enforced with barbaric strictness, it nevertheless put sufficient frighteners on people that you weren't left trying to see round the phone of the twat in front of you. And for those who just had to press buttnos and look at a screen instead of the enormous production going on in front of them, Maynard James Keenan did announce the last song was phone time. What a nice, thoughtful man. But yeah, more phone-free shows, plz.

It shouldn't, in 2022, be such a thing to be impressed by lasers. But here we are. Zip-zap, look at that, Tool's choice of lighting was genuinely impressive. Especially the bit when they beamed out from the stage to the back of The O2, encouraging thousands of people to turn and look at patterns on the back walls instead of at the band. Which was probably the exact intent.

In the early days, Black Sabbath would write during really long jams during extended sets at places like Hamburg's Star Club. It meant Tony Iommi had time to really work all the kinks out of his riffs and get them properly elastic. Watching Adam Jones, it's a similar vibe. Tool's riffs aren't actually that hard, they've just been given a lot of time to breathe and been looked at from every angle until even at their most unwieldy they're smoother than the inside of a Lindor chocolate egg.

We did all know this anyway. Grouchy and funny and sarcastic and really into The Office. But it's easy to forget, when you're watching him standing at the back of the stage, with a huge production and the band playing the first third of the show behind a floor-to-ceiling threaded curtain, that he's actually such a banter-man. "Sorry about our country," was his greeting to London. "That sounds more like a Liverpool crowd." And so on. Not exactly whipping out a Rodney Dangerfield routine, then, but a chucklesome presence nevertheless. When he's not doing that weird crouching dance thing that makes him look like a crab that's about to mug you.

5More gigs should have countdown for the encore

Back of the stage, big clock on a screen counting down 10 full minutes. It's an artistic thing (probably), also very useful. You won't have to miss anything going for a wee, for one thing, although it's still a race against time at the bar in some venues, who seem to have a policy of making it harder to get a drink than it was during Prohibition. We'd like to think the band have something that takes 10 minutes they like to do in the break as well. Boiling three eggs, one after the other, something like that.

It's a puzzle to put it together, no doubt. But changing bits up every night means no matter how good one show is (immaculate, sublime, additional synonyms for 'it was very excellent'), the other night's grass will always have greener patches. Nicer problems to have. The solution to which, of course, is to go and see more Tool shows.