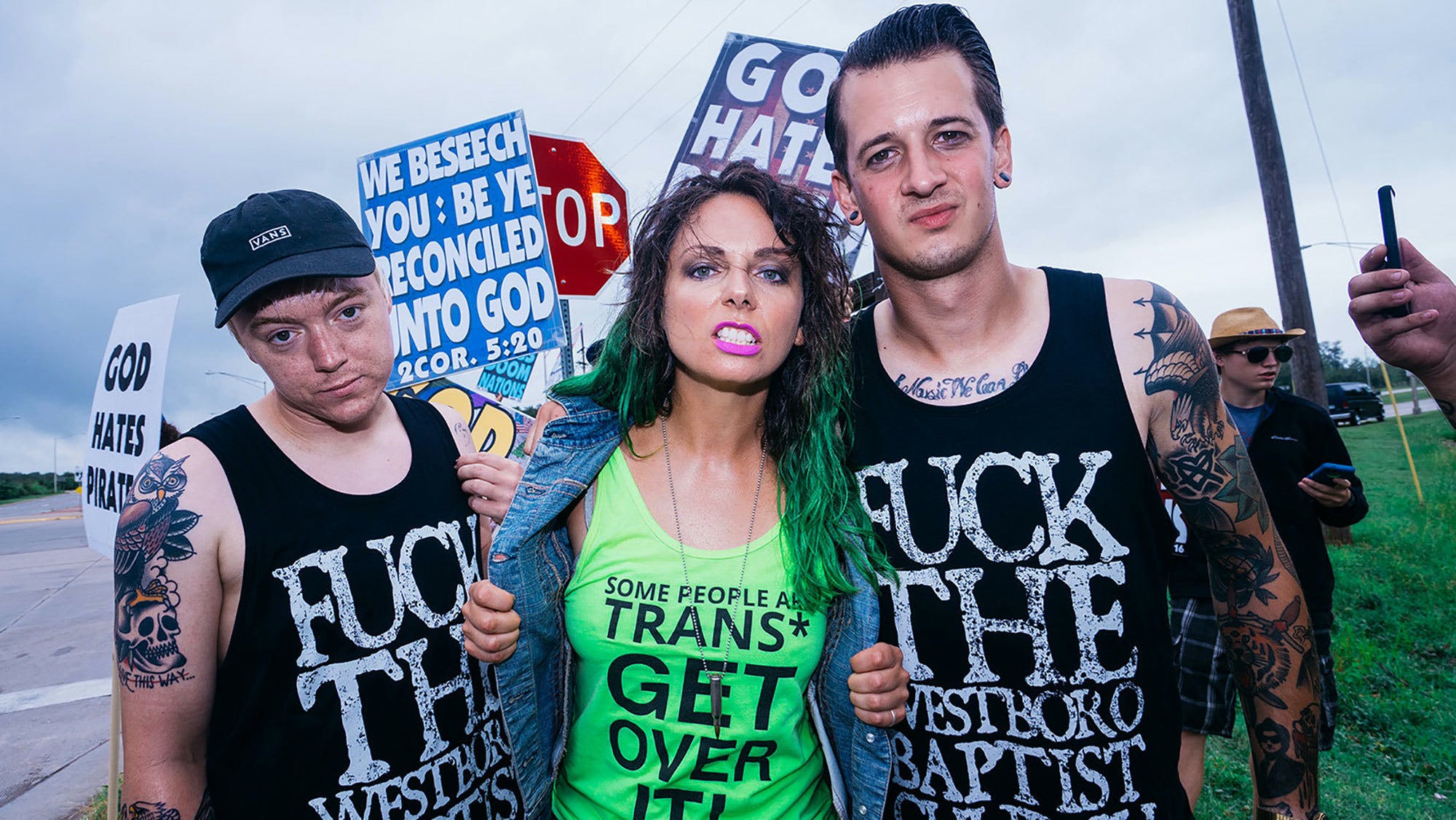 When it comes to protesting, everything is fair game for the Westboro Baptist Church.

Described by the Southern Poverty Law Center as “arguably the most obnoxious and rabid hate group in America”, this Kansas-based church run by the Phelps family has caused controversy over the years, picketing the funerals of US soldiers, gay men and women, concerts and even other churches for what they deem to be disobeying Christian doctrine.

They’ve been accused of homophobia, transphobia, anti-atheism, anti-Catholicism, anti-Orthodoxy, antisemitism, Islamophobia, antiziganism and anti-Americanism. And due to the U.S.’ protection of the freedom of speech, the hate group continue to harass and intimidate at planned protests.

When the Westboro Baptist Church announced they were going to protest Virginia politician, metalhead, and trans woman Danica Roem in Richmond, Lamb Of God frontman Randy Blythe organised a counter-party on March 11, with a group of fans drowning out the hate group with a kazoo champagne jam.

It’s not the first time that the Phelps family have clashed with the worlds of rock and metal, and unfortunately, it probably won’t be their last.

Here, then, are six times the WBC have campaigned against rock music for the most baffling of reasons.

The WBC announced that they were to protest outside the public memorial service for the late Ronnie James Dio at The Hall Of Liberty in Los Angeles in May 2010. In a press release, the church said: “This rebel had a God-given platform – for decades – which he should have utilised to publish the truth of God. Instead, he used that platform – for decades – to teach rebellion against God, in the form glorifying atheism, promoting the devil horn hand sign and other such idolatries. Now he has been cut off by an Angry God and cast into hell.”

Ronnie’s widow, Wendy, issued a statement, which read: “Ronnie hates prejudice and violence! We need to turn the other cheek on these people that only know how to hate someone they didn't know. We only know how to love someone we know!”

According to reports, three church members staged a protest which was met with a group of Dio fans with some interesting placards of their own.

On September 16, 2011, the Westboro Baptist Church picketed a Foo Fighters show at Kansas City’s Sprint Center, as the band were not using their talents to spread the word of Christianity. The band’s retort was to perform a country song called Keepin' It Clean (Hot Buns) on a flatbed truck in front of the Phelps family, mocking their opposition to homosexuality (‘Driving all night, got a hankering for something, think I'm In the mood for some hot-man muffins’).

It didn’t stop there. Four years later, the religious family attempted to protest outside the same venue and were met with the band and fans enjoying Rick Astley’s 1987 single Never Gonna Give You Up.

“Tonight, we were sitting backstage, and someone said: ‘Guess who is coming tonight?’ And I said, ‘Who?’ They said, ‘Them.’ I said, ‘Why?’ They said, ‘Cause.’ And I said, ‘Cool, let’s go out and fuckin’ hang out with them’,” Grohl explained to the crowd. “We didn’t have enough time to put together the big old show that we put on last time, so we figured, you know what, why don’t we just fucking rickroll their ass?”

The WBC announced their intentions to to picket the memorial for Slayer’s late guitarist Jeff Hanneman on May 23, 2013 at the Hollywood Palladium in Los Angeles. Kerrang! spoke to WBC member Steve Drain and asked why they were targeting Hanneman’s ceremony.

“When a guy like Jeff goes through his life in that band, who make a mockery of sin with their lyrics and their marketing, and Jeff doesn’t give God the glory for his considerable talent – and he was a talented guy, a great guitar player – we’re gonna be there as a counterbalance,” explained Drain. “Slayer were fine and dandy with promoting sin and making money off that. All we’re really saying to Jeff’s fans is, ‘Don’t live a life like that guy lived’. Because you’re going to go to hell if you do.”

The band had plans of their own and simply told their fans to “really piss off the Westboro Baptist Church” by ignoring them. There was no need, as reports suggested that the Church did not attend. The massive chickens.

Westboro Vs Panic! At The Disco

Days before their planned protest at Panic! At The Disco’s show in Kansas City’s Crossroads on July 21, 2014 the WBC released a gay-baiting parody track entitled You Love Sin What A Tragedy (sample lyric: ‘You all say it's okay to be gay, the way to fag marriage has been paved’). The band responded by pledging to donate $20 to the Human Rights Campaign for every protestor who showed up that evening. The band declared the WBC’s 13-strong turnout “weak” and rounded up their donation to $1000, plus added a 5 per cent cut of their merch sales following the show.

Westboro Vs Fall Out Boy

Fall Out Boy’s show in Kansas City was met with protest by the WBC on August 9, 2014. In the run up to the event, the band – renowned for their inflammatory lyrics and unholy lifestyle, cough – found themselves on the business end of the family’s awful song, Thnk Gd Fr Vrythng, an atonal parody of Thnks fr th Mmrs. "This ain’t obscene, it’s a God-given song of praise. Amirite, @PeteWentz?" they tweeted.

The church group went back for seconds in September 2018, suggesting that “with no sign of sobriety or Godly fear among them, you are left with little hope for their eternal souls.” We’ve met them many times and they’re thoroughly decent young men.

On July 27, 2017, the Warped Tour stopped at the Providence Hospital Ampitheater in Bonner Springs, Kansas. And, sure as eggs is eggs, the Phelps family turned up with their placards and nonsense. They were met by many musicians and their road crew, the majority wearing T-shirts sporting the slogan ‘Fuck The Westboro Baptist Church’. Some gentlemen even kissed each other on the lips, which delighted the religious group, we’re sure.