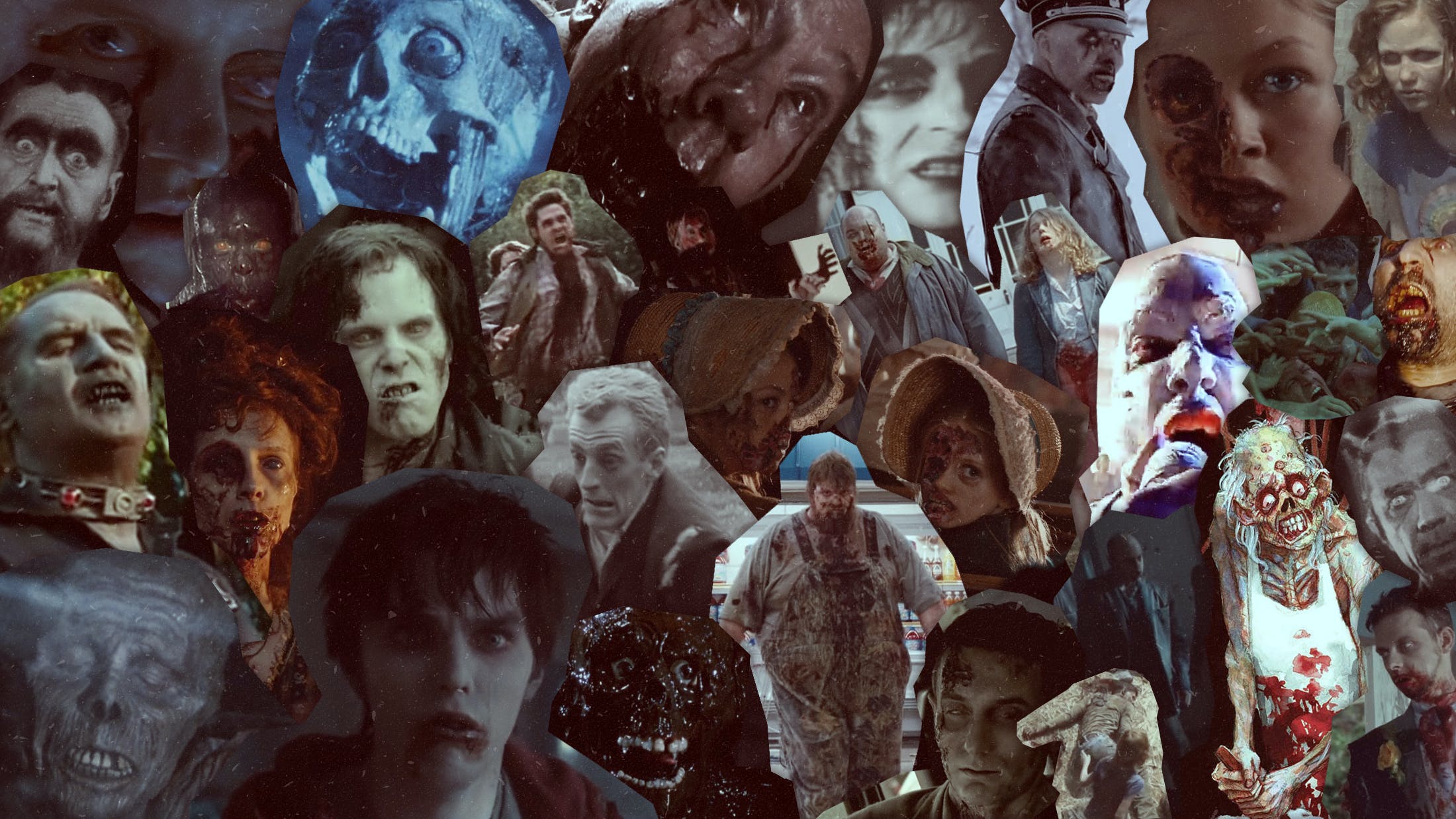 In partnership with Back 4 Blood
Words:
Mike Rampton

For as long as there has been death, there has been undeath. Almost all cultures have some kind of legends about the dead returning to life, whether to benefit the living or wreak havoc. From Aztec tales of resurrection to Nordic sagas of gods dying and being reborn, there seems to be something universal about it. From the Bible to Mary Shelley’s Frankenstein, it’s everywhere.

Haitian culture – a combination of indigenous Taino culture and African and European elements – produced the idea of the zombi, a person neither alive nor dead, enslaved into mindlessness. The word was taken to America and Europe by writer William Seabrook, who claimed to have seen Vodou cults with ‘thralls’ of zombi under their spells.

Victor Halperin’s 1932 movie White Zombie – later the inspiration for the band of the same name – is thought to be the first zombie movie, and while it wasn’t a huge hit, it made enough money that zombie movies were seen as viable projects. It used the Haitian Vodou-influenced idea of zombies being enslaved. Though the 1940s and 1950s zombies were a reasonably popular go-to for schlocky filmmakers, occasionally combined with Nazis – as in 1955’s Creature With The Atom Brain – for double baddie points.

In 1968 the world changed when George A. Romero unveiled Night Of The Living Dead. Influenced by everything from EC Comics’ Tales From The Crypt series to Richard Matheson’s incredible novel I Am Legend (which Romero happily said he had “ripped off”), it used its tiny budget and non-professional actors to incredible effect. Most of the conventions that define what we think of as typical zombies came from here: reanimated corpses of the recently dead, shuffling around with a hunger for human flesh. Additional elements, like a craving for brains, came in the sequel Dawn Of The Dead, which also brought in elements of social satire, treating zombies as a metaphor for mindless consumerism.

Romero’s film became the urtext on which all subsequent zombie projects were based. It essentially codified what a zombie was, with any deviation that an individual creator or filmmaker made having to be justified in some way. As well as Romero’s own sequels, there are countless unofficial spinoffs, remakes and tangentially-related films. The five-film Return Of The Living Dead series and the four-film Zombi series both present themselves as officially part of the same series of films, and due to a studio error placing the original film in the public domain, it has been remade dozens of times in every form from animation to opera.

The world of music has always had space for the undead, particularly when it comes to rock and metal. Besides the aforementioned White Zombie (and the doesn’t-really-fit-the-name ’60s psych band, The Zombies), there are undead-themed bands like Send More Paramedics and the Shai Hulud spin-off Zombie Apocalypse. Songs like Necrophagia’s Embalmed Yet I Breathe, Cannibal Corpse’s Evisceration Plague and Obituary’s Slowly We Rot tell macabre metal tales of torn flesh and exposed entrails. Michael Jackson’s 1983 video for Thriller features zombies by the dozen, and is clearly about horror films rather than thrillers. And, of course, there’s The Cranberries’ mega-hit Zombie, which isn’t about zombies but is named after one.

With the dawn of a new century, a generation of filmmakers who had grown up wearing-out VHS tape after VHS tape of Romero’s classics took over Hollywood, and brought their own interpretations of zombies with them. Danny Boyle’s 28 Days Later was seen as sacrilegious by some for abandoning the shambling, slow gait of classic zombies for frenzied, speedy attacks. Edgar Wright’s Shaun Of The Dead is laden with references, in-jokes and meta-gags for zombie aficionados. Zack Snyder’s debut movie was a remake of Dawn Of The Dead written by James Gunn.

There were suddenly zombies everywhere – not in the ‘Oh no, we’re dying’ sense, but in the ‘all over the pop cultural landscape’ one. Zombieland featured arguably the best-ever use of Metallica on the big screen. Warm Bodies took the ‘rom-zom-com’ idea of Shaun Of The Dead and presented an undead Romeo and Juliet. There are seven Resident Evil movies and counting. George A. Romero himself even got back in on the action, completing another trilogy of zombie movies before his death in 2017.

Zombie movies are fairly easy to make on a low budget (as Romero proved back in 1968), and the 2000s saw an explosion in fun, cheaply-made zombie movies from all over the world. After all, who needs movie stars when you have the undead? Weird, enjoyable fare like Canada’s Fido (in which Billy Connolly plays a zombie kept as a pet), Norway’s Dead Snow (which combined Nordic folklore with undead Nazis) and the Spanish found-footage hit [REC] sold DVDs by the bucketload. The 2008 British film Colin claimed to have been made on a budget of just £45.

And it wasn’t just movies. ‘Zombie walks’, in which masses of people dressed as the undead and shuffled around cities, became a thing. There was a brief trend in publishing of adding zombies to established stories, leading to books like Pride & Prejudice & Zombies. The post-Twilight explosion in young-adult horror saw series like The Enemy – set in a London where all adults have become zombies – shift huge amounts. Max Brooks’ two books The Zombie Survival Guide and World War Z were both bestsellers, the latter turned into a Brad Pitt movie. The comic series iZombie became a TV show, while The Walking Dead comic sold record amounts monthly and spawned a multimedia empire that is still growing.

The last few years have seen interesting, innovative takes on the genre, from the claustrophobic class warfare of Train To Busan to the ultra-cheap Japanese One Cut Of The Dead – which made over 1,000 times its budget at the box office due to costing peanuts – to Zack Snyder’s 2021 mega-budget, green-screen-tastic, more-is-more gorefest Army Of The Dead.

There seems to be something about zombies we simply can’t get enough of – whether there is something inherent about their blankness that forces us to confront our own humanity and what it means to be alive, or whether it’s just cool seeing guts get ripped out of people’s necks.

And, if you’re a fan of zombies, what could be more appealing than battling huge amounts of the bastards? Back 4 Blood, a gorgeously cinematic first-person gorefest made by the creators of the Left 4 Dead games, pits you against everything from four-armed undead aliens to giant subterranean beasts to good old-fashioned kill-crazed zombies. The last few years have felt apocalyptic in a slow, tedious way, and there’s something refreshingly immediate about a zombie apocalypse in which it’s you and an axe against (what remains of) the world. Perhaps the most appealing element of a zombie apocalypse is that it draws people together, forcing them to put their differences aside to unite against a common enemy and set it on fire. Other than the extraordinary violence involved, that sounds like a dream come true.

Back 4 Blood is due out on October 12 for PlayStation 4, PlayStation 5, Windows PC, Xbox One, and Xbox Series X.