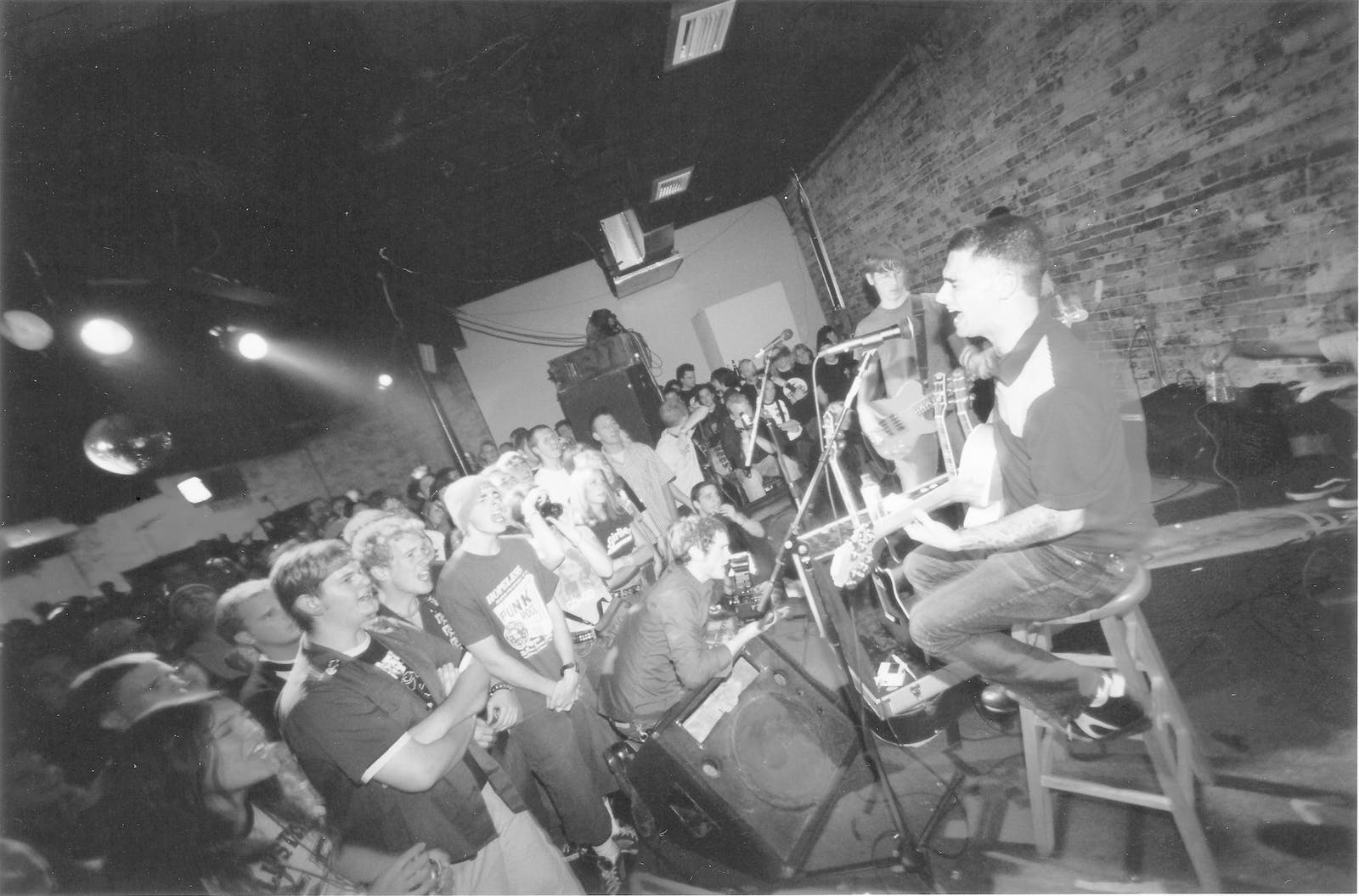 Based in New York City, Tom Mullen is the host of the Washed Up Emo Podcast. We asked him to write a short introduction to an excerpt from his new book Anthology of Emo, Volume 1, which compiles some the best stories told on the podcast and features rare and unseen photos and ephemera.

It's a shame that as the years pass, you often forget to write things down. And when thinking back to when I first met Chris Carrabba of Dashboard Confessional, my memories start to blur. I remember seeing a solo show of his in the year 2000, north of New York City. I then vaguely remember, later that year or the next, clamoring my way up front to see him open a show at New York's Roseland Ballroom for a bunch of hardcore bands. And though it seemed like many in the crowd couldn’t stand the set -- or even cared -- there was an enormous crowd around his merch table of both men and women asking for photos and buying whatever stuff he had out for sale. This scene was changing, and every day, more new fans were discovering its changing sound.

When Chris's career began, I, too, was starting out in music. I eventually chose the industry route over playing music, and throughout the years, we’ve crossed paths by way of overlapping friends, labels, and tours. Dashboard Confessional would go on to have an amazing mainstream career, while still maintaining an incredible awareness of the scene -- for which Chris would become the poster boy. His continued relevance and evolution has been inspiring to witness.

It took a few tries, but Chris and I finally found time to chat for my podcast while he was working on a Twin Forks release in 2013 or 2014, during what seemed like a long press day. As his staff sat and waited on their phones across the room, Chris and I tried to make sense of the scene, the music of the moment, and what he wanted to do next. This was before he had reunited Dashboard Confessional, so when I mentioned the “emo revival" happening at the time, he was intrigued and excited. After recording the podcast episode, it was nice to reconnect and see that he was still eager to learn and open to what was happening around him. He's always been a very warm dude.

Just last year, during my first lonely week at a new job, I was walking past a meeting, when I saw him pop up amongst the group. He ran out to give me a hug and a hello before returning to the meeting with a group of people -- most of which ended up being my new coworkers. Not a bad way to start at a new gig. Thanks, Chris.

We join Mullen and Carrabba mid-conversation...

MULLEN: That's cool. And, I mean, definitely that moment, it was felt across the scene, when that record was released. And people started talking and you were on hardcore shows, you were playing these tours. Do you remember, sort of, "holy shit?”

CARRABBA: They were only hardcore shows I did because I didn't know that if you had an acoustic guitar you're supposed to play at a coffee shop. The fuck would I ever go to a coffee shop, you know? I didn't know.

MULLEN: You played with Snapcase.

CARRABBA: Okay, let's talk about that tour, Snapcase, H20, and Face to Face.

CARRABBA: And so, Trevor, from Face to Face said, “I want this kid on tour,” Toby from H20 said “I want this kid on this tour.” These were the people I believed in, that I looked up to and they were inviting me up to this thing, and it was like, I know I'm getting to get hit on this. But they're up there doing what they believe in, with their conviction. And there's no reason I shouldn't be up there, just because stylistically it's different. There's plenty of reason. But in my youth, I thought, I'm invited by the guys that are doing the show. Their fans, maybe some of them are like the guy in the band. I didn't think I was going to cross, and I didn't come across to everybody. All I remember Trevor saying was, “you're going to get beat up, and you're going to get change thrown at you, but if you're lucky it's going to be more than you're getting paid tonight so pick up the change.” And I picked up the change. I'd get dings in my guitar, and in my face. And people hated it. I just keep playing. And the by the end of the show, I think that they understood, through listening to the song, something in the structure of the songs, maybe if I were to do this— the kid in the crowd, or the dude in the crowd, as the case was—that's kind of what I would do. So, it slowly morphed over the course of the show. And I would really be able to tell because I was selling records in the end. I'd gone from getting change thrown at me to people coming and buying the record. And it was a little tough. Then the guys would just rally, I remember Toby would wear a Dashboard shirt every night. And it was a big, "Fuck you, guys!" This is the band I care about seeing tonight. You care about seeing us and I care about seeing him. It was like a give the kid a chance kind of moment.

MULLEN: So many of those shows where it was a hardcore band with a band that was really quiet, like Mineral, and then it would be a harder band, it was okay. It wasn't these packaged, everything must sound, with a breakdown at 1:32 in the song. It didn't have to do that.

CARRABBA: No, it didn't, and I'm glad you brought up Mineral, because that was definitely a show that I saw that gave me the confidence to do my own version of that, be the guy that was different. I can't recall who they were out with but they were heavy bands, straight up heavy bands, and then there was Mineral. And they were the only band everybody left talking about. And I thought, that wasn't my goal, you've got to win the show, but it was like, wow, the fact that they were brave, made them more inclusive. It didn't push them away in the end. In the beginning, I remember seeing the quarters fly at those guys, but then three of four songs in, it's like, this is a whole new, this is a gift, I could go down a rabbit-hole because of this band. And then you would.

MULLEN: But it's connected. I think that metal, hardcore, post-hardcore, and then went to emo, there was that lineage. You can see the path. I think there was some people that were like well, it's only supposed to be this. But if you were watching it all made sense.

CARRABBA: There's always going to be these purists, but I don’t know who's unique to that time, where it was just allowed, where we're going to erase these lines of division. I can't tell you, now, because I'm not a kid who goes to shows the same way.

MULLEN: I thought about it a lot. I think it's that moment where, the Internet wasn’t as prolific, you didn’t have your phone all the time. I feel like there was less going on for you to worry, or you to be, like, oh, this is what we're supposed to be like, or this is what someone told me. It's like, you were at your show, your local market, those were the bands that came through, it all made sense. I don't know, I feel like that was the last scene or time, because after that 2000 hit Internet was pretty prolific, everything started to get faster. It was easier to get things. Napster. Before there was that work involved to it. People didn't want to do it.

CARRABBA: There was something to that work, and bands, you have to work hard. That doesn’t change.

CARRABBA: [laughs] You didn’t hear that, you didn’t hear Mineral unless they showed up to play at a show and you happened to be there. You were lucky to get to a show if you were in a band 'because it just depended on whether you were able to read the atlas or not, you know? There was no extra help anywhere.

MULLEN: Jim Adkins tells a story where he would show up at a town, find a payphone, call the random kid, his mom would pick up, "Oh, yeah, go here, okay." Leap of faith every day. [laughs]

CARRABBA: We had shows that weren't shows, we had shows that were booked that we'd show up to and I remember we were, like, New Found Glory and the Movielife, and we ended up in West Virginia, full booked show, kids outside, nobody mentioned it to the club. So, we just did a show outside. Club owner came out and yelled at us. If you want to charge the people, open the club. Good, yeah, everybody inside.

Tom's Anthology of Emo, Volume 1 is out now and includes the full version of this interview as well as interviews with Mike Kinsella (American Football, Owen, Cap’n Jazz), Norman Brannon (Texas Is The Reason, Shelter, New End Original), Dan Didier and Davey Von Bohlen (The Promise Ring), Chris Simpson (Mineral) and a bunch of other legends.