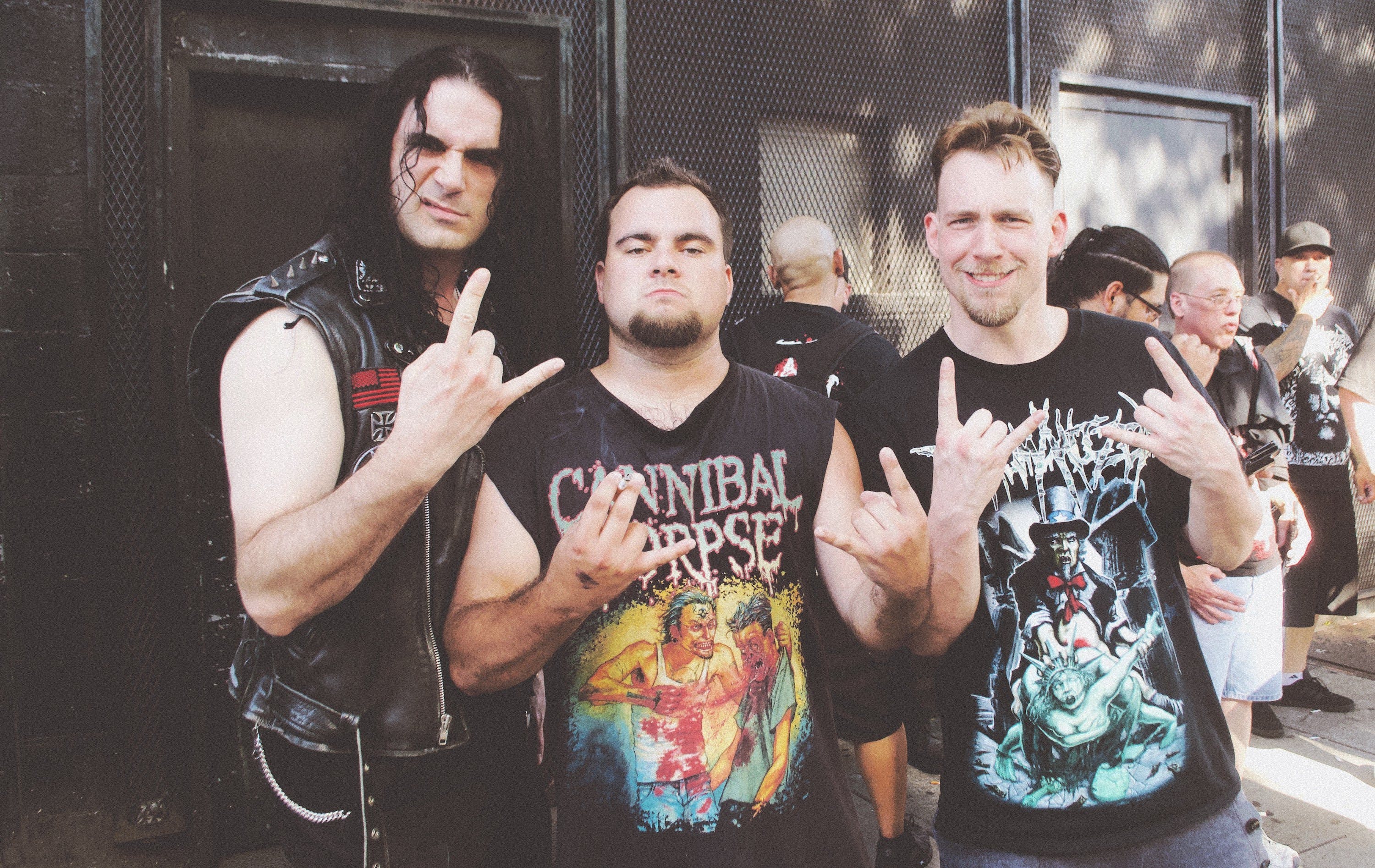 New York may be a city of towering skyscrapers and big dreams, but at street level, space is limited. Many of New York’s most important and best organized events take place in a series of cramped grottos and basements, attended by attractive, high-profile fashionistas.

But a multi-day death metal festival full of brutal tech and slam? Nah, son. That shit’s not getting more than one venue – and you’ll be lucky if the line-up isn’t just a bunch of barely-practiced locals.

And yet, 2018’s sixth annual New York Deathfest managed to pull it off with scrappy gusto. Organized by local promoter and distro Gutter Christ Productions and hosted by legendary Brooklyn metal hub Saint Vitus Bar, this underground free-for-all brings together an international line-up of tight, driven bands who’re as furious as they are happy to be there. The result is a wonderful weekend of music that sounds like mechanized gangrene being devoured by a grateful, hungry fanbase.

It’s Saturday, and New York is in the grips of a repulsive humidity-wave. Fortunately, Vitus provides a cool, dark burrow for early attendees to hide from the heat and soak up ice-cold tall boys. Between bands’ merch stations are a staple of the modern underground death metal show: distro tables, where CDs are still king and fans can pick up releases by their favorite weirdo underground goremongers. The mini-distros are indicative of the fans in attendance, whose appetite for the sickest shit imaginable isn’t always represented in the modern climate of progressive doom, mathcore, and black and roll. Even the first-comers seem charged with excitement and ready to get fucked up.

Fort Worth, Texas’ Primordius are a good appetizer, playing solid chug-a-lug death metal that provides ample lubrication into the anus of the day. Frontman Weston Wylie is like a working man’s Frankenstein: tall and stone-faced, but also grateful in his stage banter and friendly when he’s milling around afterwards.

Slamentation, an international group hailing from Switzerland, Germany, and the UK, are a better representation of the fest’s tenor, playing kinetic, punishing slam-death that gets the crowd sweating. There’s mention of technical difficulties (guitar feedback, monitor issues, etc.) but it’s shrugged off as fest-world problems. Can’t be easy, organizing an event like this.

In fact, everyone has only good things to say about the fest’s promoter and sponsor, Gutter Christ Productions. Equal parts label, distro, and T-shirt company, Gutter Christ is run by one Anthony Gutter of New Jersey, and goes all-in on underground metal at its most confrontational and unapologetic. Not only do several bands give Gutter a shout-out onstage, they give him ample gratitude for supporting the kind of metal usually found in the sixth or seventh row of logos on a festival poster.

When I ask the dudes in New Jersey death metal crew Cognitive about what makes NY Deathfest special, it’s the first thing they bring up. “Gutter busts his ass,” says guitarist Rob Wharton. “Gutter’s booking great bands. He mixes it up a little bit more. He never gets stuck on one specific genre.”

Cognitive’s set is an unexpected treat of the day: energetic, driven, and super pissed off. The band utilizes elements of slam while bringing in some of the hunched groove and menace of classic acts like Autopsy and Obituary. It feels as though they’re the ones who really rip the fest open from urethra to ass.

That said, they pave the way for Korpse from the Netherlands, who come off as underground death metal personified: brolic, furious, unrelenting. They’re the first band to order everyone to get the fuck up and make some noise who don’t feel like they’re asking too much – the crowd is excited to match their energy. How drummer Marten Van Kruijessen headbangs like that while playing those fills is anyone’s guess.

Maybe it’s the city or the venue, but for whatever reason, NY Deathfest feels ragtag. There isn’t the same feeling of a unified fest crowd the way there is at something like Maryland Deathfest; people come and go, hang around on stoops, run out for sandwiches and cheap brown-bag beers. But this is liberating, in a way. There isn’t some viral celebrity dickhead shooting an over-excited webseries sponsored by Gibson and Sirius XM. There’s a noted lack of obvious merch fetishists rocking too many obscure pins, or scene darlings who spend the whole fest on their phones. Everyone’s here to piss sweat and bang their fucking heads.

Dysentery of Waltham, Massachusetts, are the day’s most straightforward slam band – in attitude as well as sound. Frontman Scott Savaria is chill and hilarious during his banter (“It’s hotter outside than it is in here! Smoke your vape pens inside!”) but crushes in his performance. Texas’ Kill Everything is also a burly butcher’s shop of an act, playing thick, visceral death metal that makes up for a lack of nuance with straightforward aggression.

The stamina of the people in the pit is admirable. Every band’s set sees the arrival of a few newcomers, but otherwise, the same ten or eleven dudes mosh for every fucking song, from five in the afternoon deep into the night. This fest’s crowd is all about dance moves, whether it’s jigging leprechaun-style, whipping your arm back and forth like it’s on a hinge, or just some good ol’-fashioned emo karate (sorry, guys, no matter how brutal the music is, when you do a somersault into a spinning roundhouse kick, you’re announcing to everyone that you had an Underoath phase).

As night falls, Vitus gets packed, and the humidity inside begins to match that on the street. There’s spilled beer everywhere; the space around the PA monitors is littered with empties and mostly-empties. Every shirt you brush against is damp to its core. There’s a comfort to it all, though, a sense of base humanity, as though the loud, sweaty kid from every high school class in America got together to talk about General Surgery. Once everyone’s sticky enough, there’s no room for ego.

Dehumanized are, in a word, seething. They play a churning, colon-deep metal assault that whips everyone into renewed frenzy (that fact that the band hails from a New York town named “Floral Park” feels like a joke, as their songs sound like they would wither any flower in a five-mile radius). Their fury is uninterrupted by bullshit banter, and moshers show their appreciation by losing their minds and smashing anyone in their path.

Finally, Las Vegas’ Guttural Secrete, the night’s headliners, take the stage and blast the crowd with brutal, to-the-point death metal. It’s hard to top Dehumanized’s bristling energy, but Secrete hold their own, and the audience loves them for it.

NY Deathfest’s first day is disjointed, sweaty, low to the ground, and simplistic – but that somehow makes it more enjoyable than a huge ordeal of a festival. It’s disparate but whole; tangible in a way that you can’t sum up with a logo or commemorative beer cup the way you can with, say, Wacken. The experience reminds one of a dismembered corpse: there are a million tiny bits to draw the eye, and each shred of flesh inspires its own bouts of awe and disgust, but they’re all still ripped from the same glorious hunk of bleeding meat.