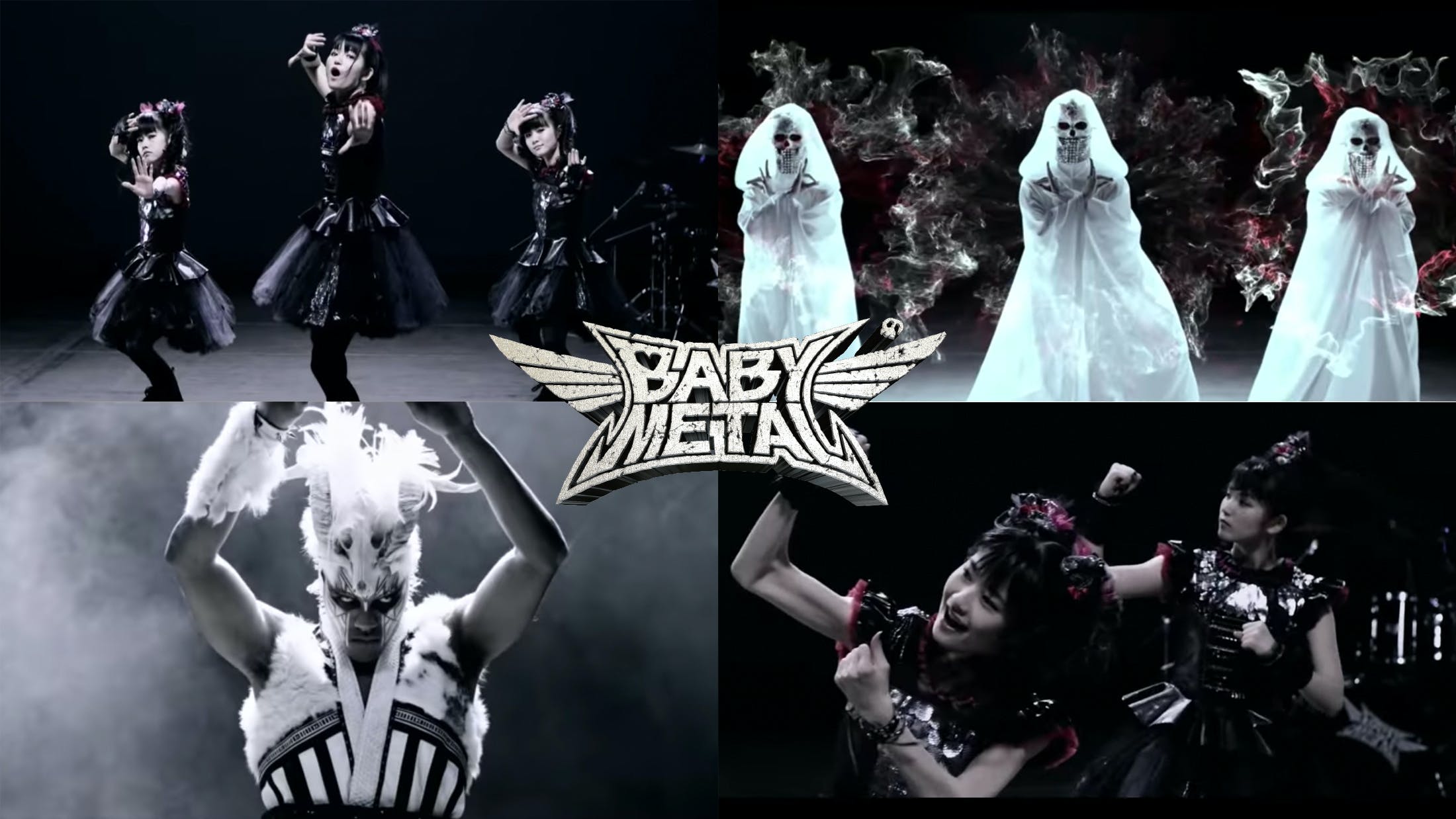 There are a billion alternate universes in which BABYMETAL, as a thing, doesn’t work. The combination of big-ass metal and cutesy singing and dancing could so easily suck, but somehow it’s ended up being a world-beating formula. The stars have aligned in a way that's meant some of the biggest metal festivals in the world, full of grizzled, hairy men drinking beer from horns, have now played host to these small Japanese women in frilly dresses. It’s kind of amazing. Let’s dive into Karate, shall we?

0.14
And there’s YUIMETAL! She is no longer in the band, after leaving in late 2018. In her leaving message, she apologised for her health problems inconveniencing both the band and its fans, and suggested she might resurface as a solo artist under her own name, Yui Mizuno.

0.52
So there’s a lot going on here. Bejeweled skulls, a slightly vodou-looking guy and three small Japanese women in fancy dresses, all backed by some big-ass metal.

0.55
MOAMETAL told Billboard that this was her favourite song, saying: “I was told that karate has a courtesy: ‘Start with a bow and end with a bow.’ This is something important we value in our lives, because we never forget courtesy and a feeling of gratitude wherever we go. We would like to show those elements through this song. There's nothing to be afraid of, and we can go anywhere with the BABYMETAL team. With that strong feeling, I hope to keep singing this song.”

0.58
This chap is pretty intimidating, isn’t he?

1.01
And the full-on BABYMETALness of it all begins, the adorable vocals over wailing-ass guitars. The subgenre BABYMETAL fall into is ‘Kawaii metal’, which they are credited with pioneering. It mixes metal with Japanese pop – other bands in the field include Ladybaby, Iron Bunny and Necronomidol.

1.36
BABYMETAL, as you might expect, didn’t form in the drinkin’, jammin’, fuckin’ shit up way that a lot of bands form. They were put together by producer, Key Kobayashi, aka Kobametal, a lifelong metal fan who worked in the Japanese pop industry, and met the members of BABYMETAL putting together a metal-themed sub-group of a massive school-themed girl group, Sakura Gakuin. None of the girls had encountered metal before, and admit they found it ‘scary’. The ‘idol’ industry in Japan works in quite an unusual way, where big talent agencies form acts and churn through members – Sakura Gakuin has had 36 different members over the years, with some ‘graduating’ and leaving every academic year.

1.49
BABYMETAL’s mysterious instrumentalists are known as the Kami Band. You don’t really see them much in this video, but somewhere in there is guitarist Mikio Fujioka, who died in 2018 at the tragically young age of 36.

2.04
It’s all getting trippy now, with glitchy edits coming in – their torsos just briefly slid from the rest of their bodies. Madness.

2.14
'Seiya Soiya' is a 'go for it' type chant specifically used at the Shinto festival of Sanja Matsuri, which takes place every May. Large elaborate shrines are carried around during the festival, requiring up to 40 people each to support them using their shoulders, while onlookers chant 'Seiya soiya'.

2.56
That is the sign of kitsune, or the fox, that she’s making there. There is an elaborate backstory to the BABYMETAL mythos, involving plans coming from the Fox God to manager/producer Kobametal and then being passed on to the members of the band. The Fox God’s goal is for their music to spread all over the world.

3.24
This song is, of course, in Japanese. According to SU-METAL in Billboard: “Its lyrics portray a strong will to go on, no matter what happens in your life. We play shows with strong wills so we can relate with the lyrics in Karate. We'll be delighted if listeners can feel positive energy by listening to this song.”

4:21
If you look carefully in all these eye close-ups, you can see the other band members reflected.

4.44
There we go. Phew. An awful lot happened in the last four-and-three-quarter minutes. Swords! Skulls! Foxes! Choreography! Super-strong air-destroying punches! Let’s all have a nice sit down. Good work everyone!