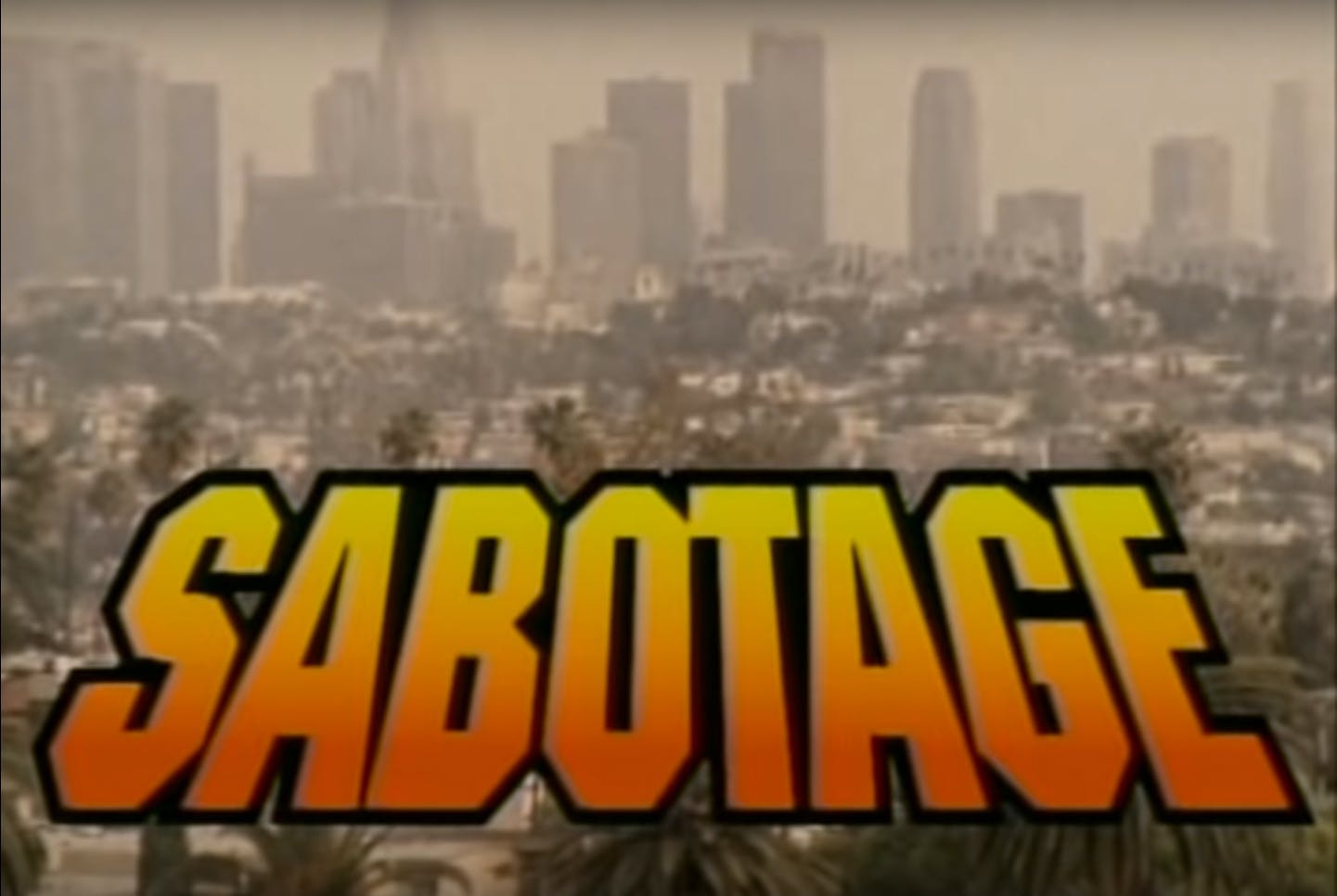 Art is subjective, so there’s no such thing as the definitive best music video ever, but if there was, it might just be the Beastie Boys’ clip for Sabotage, a joyously silly video that is pretty much one joke dragged out for three delightful minutes.

Directed by Spike Jonze, who would go on to make films like Being John Malkovich and Her as well as co-creating Jackass, the low-budget video sees MCA, Ad-Rock and Mike D running around the streets of Los Angeles in a pastiche of 1970s detective shows.

That’s kind of all there is to it, but it’s magnificent, as much due to the video as the track itself, an incredibly catchy punk/metal/rap hybrid that partly stemmed from Ad-Rock’s anger at dealing with paparazzi at his friend River Phoenix’s funeral.

It’s one of those songs that everyone loves (and features in two Star Trek films), and the video helped kickstart the career of a guy who became one of the 21st century’s most interesting filmmakers (and made Weezer’s Buddy Holly video), so let’s dive right in and see what we learn.

0.01
Now-obscure 1970s cop shows are referenced all through this, including Hawaii Five-O, The Streets Of San Francisco, S.W.A.T., Baretta, and Starsky And Hutch.

0.11
Hey look, it’s the Beastie Boys – Adam 'MCA' Yauch, Adam 'Ad-Rock' Horowitz and Michael 'Mike D' Diamond. Director Spike Jonze met the Beastie Boys photographing them for Dirt magazine. They mentioned an idea they had for a photoshoot which Spike loved it.

“For years, Adam Horowitz had been talking about doing a photoshoot as undercover cops, wearing ties and fake mustaches and sitting in a car like we were on a stakeout,” Yauch told New York Magazine in 1999. Spike did the shoot in character despite being behind the camera the whole time. “When he was taking the pictures, he was wearing this blond wig and mustache the whole time for no apparent reason” said Yauch.

The band enjoyed the shoot so much that they decided to revisit it in video form. "We'd done videos where the production people came up with these elaborate budgets, and it started to feel really awkward on the set," Yauch said. "So we asked Spike to work with just a couple of people, so we could fit the whole production in one van. Then we just ran around L.A. without any permits and made everything up as we went along."

0.25
Spike Jonze co-created Jackass, which started in 2000, and you can really see some shared elements – the fast and loose approach to filming permissions, for instance, and this bit looks a lot like it’s been filmed from a skateboard travelling next to the car.

0.40
According to the eagle-eyed experts at Dafont, this font is called ITC Machine. So now you know.

0.58
MCA is the one Beastie that gets a dual role, as both Sir Stewart Wallace and Nathan Wind.

1.04
Trainspotting director Danny Boyle cites the energy of this video as a big influence on the famous opening credit sequence of Trainspotting, where Ewan McGregor runs through the streets of Edinburgh.

1.15
Two rented cameras were accidentally broken during production. One was placed in a ziplock bag for an underwater shot – a bag which leaked. Another fell out of a van window. The budget ended up being three times what it was meant to be, almost entirely due to these accidents.

1.21
So it’s MCA as Nathan Wind as Cochese, Ad-Rock as Vic Colfari as Bobby 'The Rookie' and Mike D as Alasondro Alegré as 'The Chief'. Layered, you know?

1.47
There were additional knife fight sequences that were left on the cutting room floor due to what could and couldn’t be shown on MTV. Some of the extra footage can be found in this blooper reel.

2.13
That’s DJ Hurricane as Fred Kelly as Bunny. He stopped working with the Beastie Boys a few years later, before the release of 1998’s Hello Nasty.

2.24
Sabotage was nominated for five MTV Video Music Awards, and somehow didn’t win any of them. As a particularly John Malkovichian Michael Stipe of REM headed to the stage to receive the Best Group Video award, MCA came out of the wings in an amazingly convincing Swiss person costume, in character as “Nathaniel Hörnblowér”, to protest Sabotage being skipped over.

Yauch used the Hörnblowér name for his work directing several other Beastie Boys videos (including Body Movin’ and Intergalactic) and their full-length concert film Awesome; I Fuckin’ Shot That (which also features comedian David Cross as Hörnblowér in some behind-the-scenes extras). Stipe described the stage invasion as “a little bit of revolution” while Jonze described it as “an appalling situation”.

2.30
As a really successful, beloved track, it’s been covered a lot, by bands including Phish and Korn, but Cancer Bats’ 2010 cover is the best, accompanied by a video featuring the band abducting various Beastie Boys lookalikes.

2.42
Buddy Rich was a famous jazz drummer and bandleader known not only for his talent but also for his temper. Bootleg tapes were circulated of him shouting at his band members, swearing his head off, threatening to fire them for things like having beards.

2.49
Promoting the single, Beastie Boys performed Sabotage live on The Late Show With David Letterman, and holy shit, it’s amazing. It’s exhausting and brilliant and undoubtedly one of the best performances from a chat show ever.

2.54
Following Adam Yauch’s 2012 death from cancer, artist Derek Langille converted this video into comic form by way of tribute. The 7-page comic is free to download and print.

This year's Record Store Day releases have been confirmed, with the likes of Linkin Park, Rage Against The Machine, Pearl Jam and Deftones all unveiling limited-edition records.

Dave Grohl and Greg Kurstin have shared the first cover from their The Hanukkah Sessions! project: an awesome rendition of Sabotage by the Beastie Boys.