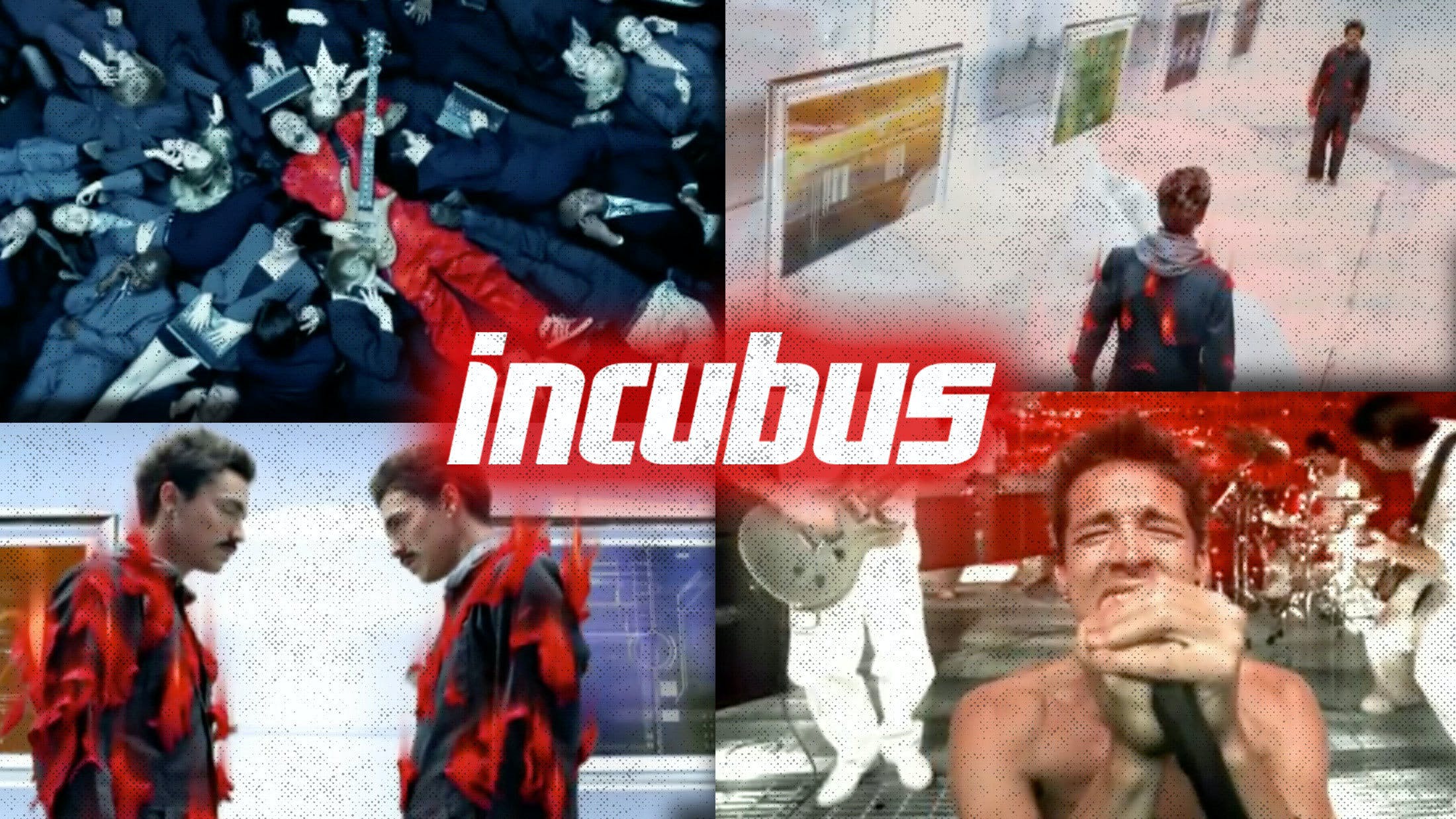 There have sort of been three Incubuses. Incubuses? Incubi? Incubodes? Anyway, there have kind of been three of them – the young funk-metal party animals of their first few albums, the arena-filling headliners that showed the more sensitive side of nu-metal, and the more experimental and musically ambitious act of recent years.

Consistent through all these eras? Brandon Boyd taking his shirt off at every opportunity.

0.01
There… there must be some mistake. Brandon Boyd appears to be fully clothed.

0.09
This is Incubus’s mascot and kinda-sorta unofficial sixth member, Brandon Boyd’s real-life father, Chuck Boyd. He’s fairly shrouded in mystery, and the band have cheerfully spun various ever-conflicting myths about him over the years. Also known as Charles Mulholland, he was an actor, mainly working in the 1970s. He appeared in an episode of Starsky and Hutch, the Chuck Norris film Slaughter In San Francisco, had a tiny role in Predator 2, and reportedly did voiceovers for sex education videos. One of the sources of the younger Boyd’s matinee-idol good looks, he also modelled for either Salem Cigarettes, Kool Cigarettes or both. (Side note: how was it ever acceptable for a cigarette brand to be called Kool?) He also appears in the videos for A Certain Shade Of Green and Take Me To Your Leader, as well as the covers of Enjoy Incubus and S.C.I.E.N.C.E.

0.16
Guitarist Mike Einziger has had an awful lot of haircuts over the years. He’s also made an awful lot of money – he co-wrote the late Avicii’s global megahit Wake Me Up, as well as working with big-ass artists like Pharrell Williams, Hans Zimmer, Tyler, The Creator and Skrillex. He’s also an entrepreneur, founding several tech companies, and a seriously talented musician, composing enormously ambitious avant-garde chamber music. He is a published academic, having co-authored a paper while at Harvard, and has worked with musician turned physicist Professor Brian Cox. Pretty interesting dude, Mike Einziger.

0.29
Boyd was indeed 23 when he wrote this in 1999. He also mentions being 23 in the song Promises, Promises, and described himself to Vice as being “kind of obsessive about that number”.

0.35
That line is “an ominous landscape”, not a mispronounced “anonymous landscape” like some IDIOT probably thought it was for the past twenty years.

0.42
Drummer José Pasillas II was an art student in the early days of the band and, together with Boyd, did a lot of work on the visual side of things. A lot of their early flyers featured artwork cut out from The Joy Of Sex.

0.57
Bassist Dirk Lance (a porn-influenced pseudonym – his real name is George Alex Katunich) left Incubus in 2003 after the album Morning View. He now composes music for video games with his company Stickman Entertainment, and has worked on titles like WWE Smackdown.

1.02
It seems strange now, but in 2000 it was a rarity to see stretched earlobes on telly. Interestingly, the older version of Boyd played by his dad doesn’t have stretched ears, and Boyd himself has allowed his to almost close up.

1.07
They’ve met in the middle – Chuck’s got younger, Brandon’s got older and they’re at exactly the same point. Whooooa. Director Steven Murashige has also worked with Prophets Of Rage, Radiohead and, amazingly, Jem. He’s made commercials for Unicef, McDonald’s and Rimmel, and his 2016 short film Venom Therapy was a big hit at film festivals around the world.

1.17
DJ Kilmore joined Incubus on turntables and keyboard in 1998, with Make Yourself his first album with them. Their previous DJ, DJ Lyfe, was fired, and later sued the band for poor accounting. Kilmore also releases his own music, and has amazing dreadlocks down to his knees.

1.28
While there’s something quite funny about the earnestness of 'I was having a look. in a book. when I saw…', it’s what happened. Almost. It was actually a magazine, as revealed in an interview with Boyd. "I was in a bookstore, browsing through an old Life magazine, when I saw a picture of what the article called spontaneous human combustion. There were an old guy's legs and shoes, perfectly intact – then, right around his knee area, was just a pile of charred ashes. I was going through some turmoil in my life, both good and bad, and the image struck a chord, so I wrote a song about it." It could have been more accurate, of course, if it was 'Not two years ago, there’s a thing that I’d seen / in a zine', which still rhymes, but who are we to nit-pick?

1.33
“Combustication” is not a word. The genesis of this song came when Boyd’s relationship with his girlfriend of seven years – they’d been together since they were teenagers – broke up around the same time as both his grandmother and a friend died. Seeing the picture of the burned remains of a victim of spontaneous human combustion in Life magazine, he essentially thought, yep, that’s me, I’m done.

1.44
Special effects have come on quite a long way.

1.53
Incubus sat in an odd place in the nu-metal world. They’re pretty much metal-influenced hippies – playing bongo drums at Ozzfest – and found some of the bands they were grouped in with to have very different sensibilities to them. Boyd said in an interview: "We opened for so many bands for so many years and with some I'd love their cool energy and then later I'd find out what their lyrics were and go, '…dang, man. Harsh.'

2.14
Boyd’s extremely pleasant appearance did not go unnoticed by his fanbase, with Spin magazine writing of him in 2001: "Considering his androgynous beauty and sweet demeanor, plus Incubus' kid-tested/mother-approved guitar rock, it's no surprise he's MTV's newest weapon of mass heartbreak. Girls scream for him to take his shirt off at Incubus shows (he usually obliges), and Teen People recently voted him one of 'The Hottest Guys in Music.' His sensitive-guy appeal sets him apart from today's testosterone-drunk rock". You’d think, twenty years after this video was made, that Boyd would look like an old man now, but the jammy bastard still looks great, and now sports an unfeasibly handsome grey-flecked mane.

2.20
Boyd has also released solo albums, authored three books and exhibited art. On various Incubus projects he’s been credited as The Invisible Floating Torso Man, Happy Knappy, Brandon Of The Jungle and Cornelius. He also campaigns against single-use plastics and generally wanders around being a rad dude.

2.36
There’s a song by Weezer called Pardon Me as well, from the album Make Believe. Incubus’s one is, of course, from Make Yourself. That’s confusing, Weezer.

3.27
There we go. Lovely work, everyone – consider yourselves very much pardoned.

"Instead Of Falling Into Some Subgenre Of Rock, We Created Our Own": An Oral History Of Incubus' Make Yourself

Incubus' Brandon Boyd Is Working On Covers For His Solo Album

Incubus frontman Brandon Boyd has been keeping busy during lockdown...