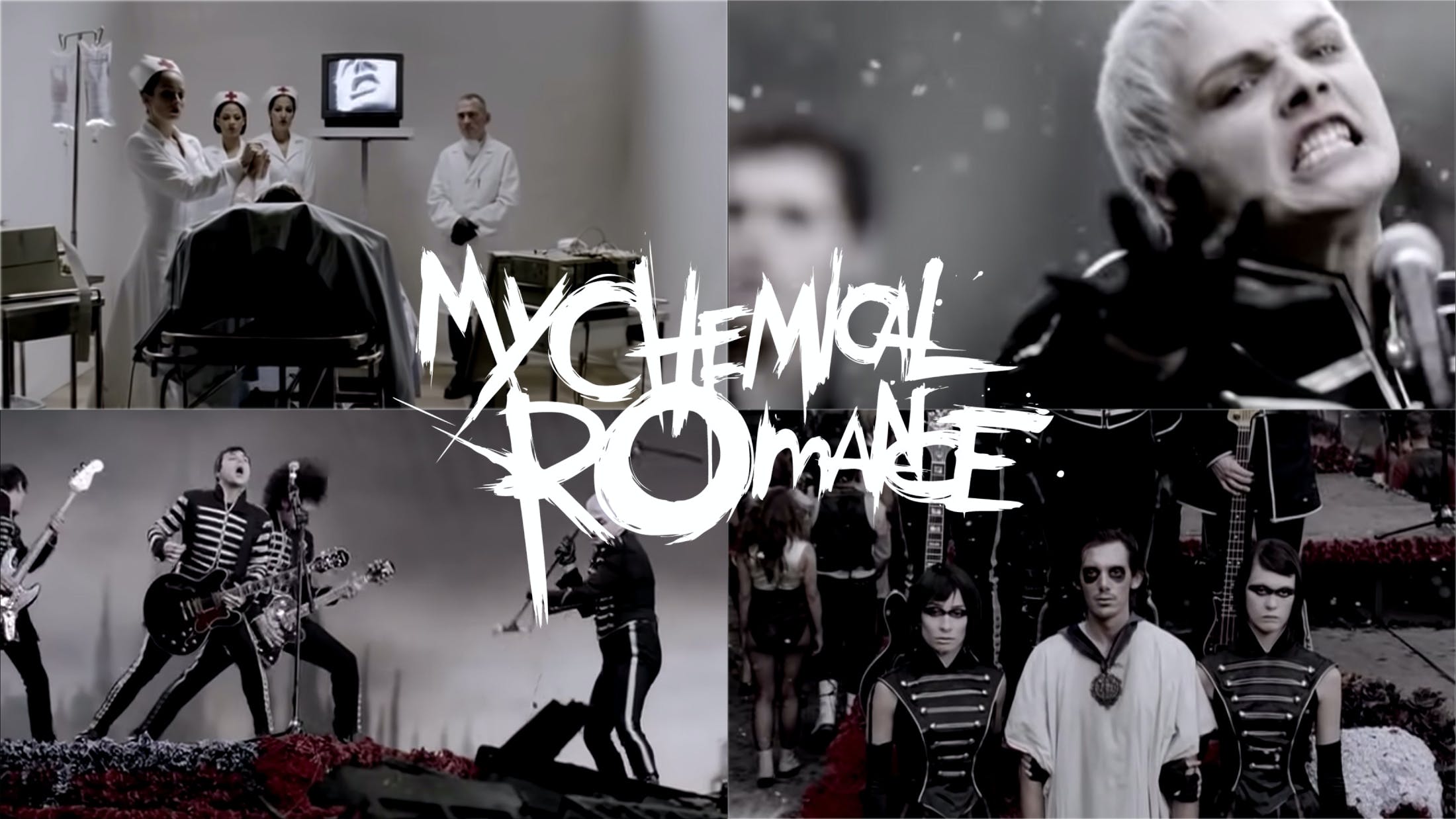 It’s not out of the question we’ve said this about other music videos before, but Welcome To The Black Parade by My Chemical Romance might be the best music video ever made. It’s a massive, high-budget, high-concept motherfucker of a video, with everyone going for it like there’s no tomorrow, so let’s waste no time and dive right the heck in.

0.01
This opening note, a G, is the subject of a running joke among My Chemical Romance fans, where it’s all it takes to get someone to cry. One dedicated fan – not only of the band, but of annoying people – even made a version of the song where every note is a G, and it is ROUGH GOING.

0.04
The blinking eyes of Mr Gerard Way, there.

0.16
Ooh, it’s a big expensive video! Sets and effects and stuff. Director Samuel Bayer is one of the rock world’s most accomplished directors, working with pretty much every megastar-level act out there. Maiden, Metallica, Manson, Green Day, blink-182… Oh, and he made the video for Smells Like Teen Spirit by Nirvana. That one’s pretty famous.

0.22
That is actor Lukas Haas portraying The Patient, the central character of the story told throughout The Black Parade album. Gerard Way has the idea that when death comes, it does so in the form of your most treasured memory, and in the case of the Patient, that is a parade he went to as a child. The album then goes through other memories he has, as he realises he’s lived more of a life than he thought.

0.39
Haas, seen here as The Patient, is no stranger to music videos, having previously appeared in Outkast’s Roses video, UGK's International Player's Anthem (I Choose You) video, Death Cab For Cutie's Cath… video and Jet's She's a Genius. He’s also in loads of films – Mars Attacks!, Inception, First Man, The Revenant and a lot more.

1.04
And there, within the black parade, is The Black Parade, the alter-ego band adopted by My Chemical Romance for this album, complete with Goth-Beatles costumes and loads of fucking bombast.

1.12
Gerard Way is channelling his inner Freddie Mercury here, and doing so extraordinarily. This song was compared in a lot of reviews to Bohemian Rhapsody, and the bigness and theatricality of the whole album were favourably compared to Freddie and pals. 'But didn’t Bohemian Rhapsody have loads of sections in it?' you cry. Yeah, it’s all about to chaaaaaaange.

1.20
Speaking of fathers, Gerard Way sometimes dedicates this song to “all the dads out there”. Three of the band are now fathers – Gerard Way has a daughter, Ray Toro has a son and Frank Iero has twin daughters and a son.

1.48
We’re about a third of the way into the video and it’s already completely acceptable to have started crying. There’s a guy dying, there’s dad stuff, it’s all emotionally wrought and really beautifuly put together, and again, it’s only a fucking third of the way in.

1.55
Guitarist Ray Toro describes this song as being like MCR’s Bohemian Rhapsody, telling an interviewer: “It’s probably the most epic song on the record. I love how it came together.”

2.00
The 'she' there (also it’s like a totally different song now, right?) is thought to possibly be a reference – the only one on the album – to Gerard and Mikey Way’s beloved grandmother Helena, inspiration for their earlier song of the same name.

2.10
MCR’s awesome costumes (and the ones for the Danger Days album) were designed by Colleen Atwood, a pretty legendary figure when it comes to costuming. She has worked extensively with directors like Tim Burton – whose films would be extremely different without Atwood’s extraordinary work – and JJ Abrams, getting herself 12 Oscar nominations and four wins. She did the costumes for Mars Attacks!, starring a young Lukas Haas – small world!

Gerard Way’s haircut was also part of the deliberate image-change – he told Rolling Stone he wanted to look “bald and deathly”.

2.30
A fun sped-up drum fill for Bob Bryar, there. This is the only MCR album he is on, although he has co-writing credits on five tracks on Danger Days. There is currently no official drummer in the band, with Jarrod Alexander (who has previously drummed with the Vandals and Alkaline Trio) performing on tour. While no specific reason was given for Bryar’s departure from the band, it seems like it wasn't his decision. Last year in an interview he said “I have not listened to the record in a very long time. I am very proud of it, but the memories that come along with listening to it are too much for me. [...] You won't find one My Chem item in my house. I don't need to be bummed out every day by hearing or seeing things relating to something that I thought would last forever.”

2.35
This is the character Mother War, who the album track Mama (featuring Liza Minnelli) is about.

2.44
This album was the first Gerard Way made after kicking a few bad habits – he got very into cocaine and booze in an effort to help him get over the anxiety of being in the limelight. However, after getting ill in 2004 he got sober and, happily, became an even better frontman than before.

2.58
It’s a big old undertaking, this video – a big set, extras aplenty, costumes, the whole wazoo. Two years ago, the band released 24 minutes of outtakes from it. Not, like, bloopers – just usuased shots. There aren’t a lot of bands who could release nearly half an hour of not-that-great footage and have fans lap it up, but My Chemical Romance are… well, they’re kind of a big deal, you know?

3.17
'Starved to death in a land of plenty' is an extract from the diaries of America explorer William Clark of the Lewis and Clark Expedition, which is taught a lot in American high schools. Interestingly, that journal entry was dated September 11, 1804 – Gerard Way famously decided to form My Chemical Romance after the tragic attacks of September 11, 2001.

3.24
There’s a lot of sections to this song. The band started writing it shortly after forming, but it took them a while – five years – to nail it. It started out slow, sung in a way reminiscent of Frank Sinatra’s My Way, and had the title The Five Of Us Are Dying. Unable to quite get it where they wanted it to be, the band left it off their first two albums despite considering it for both. Working on this album with producer Rob Cavallo, who had recently done Green Day’s American Idiot album featuring the similarly ambitious, multi-movemented Jesus Of Suburbia, they revisited the song. Adding a faster beat and making a few changes, they found what they were looking for an an anthem was born. Asked what he wanted people to take away from it, Gerard Way said “I don’t want people to be afraid of living, which I think is everybody’s biggest fear.”

3.46
Mikey Way there, who used to make money bootlegging obscure Disney releases and use it to take his older brother to Smashing Pumpkins shows. Last year he followed in Gerard’s footsteps by becoming a comics writer, co-scripting DC’s Collapser series.

3.51
Guitarist Ray Toro has one of the finest heads of hair in all of rock. He’s at his most Brian May-like here, and in fact the band brought May out for a few shows touring this album. Toro also did a really ace, echoey, synthy, weird cover version of Weezer’s Tired Of Sex for a Kerrang! compilation a few years ago.

4.06
Big-ass glam guitar spin from Frank Iero, there. He was the busiest member of the band musically during its hiatus, releasing music both as a solo artist and with several different bands. A few years ago he was nearly killed in an accident in Australia when he was hit by a bus, but was saved by the massiveness of his rucksack. Interestingly, the drum tech who worked on the Black Parade album and tour, Mike Fasano, is famed for the massiveness of his nutsack.

4.17
Most MCR shows used to close with Helena, including their final show pre-reformation, the closing refrain being 'So long and goodnight'. Their at-the-time final show in 2013 was no exception. However, when they reformed for what they said would be one show in December 2019, they closed with Welcome To The Black Parade, the more optimistic 'We’ll carry on' ringing out. Sure enough, they’ve gone on to announce a massive, ever-growing tour.

4.53
It’s a great fucking video, isn’t it? Emotionally stirring, visually beautiful, and capable of transforming someone who had never heard of My Chemical Romance into an instant fan. In 2017, this was named MTV’s Greatest Video Of The 21st Century, fairly justifiably really. Well done everyone. Just 20 or so seconds of reverb to go. Wonderful stuff.