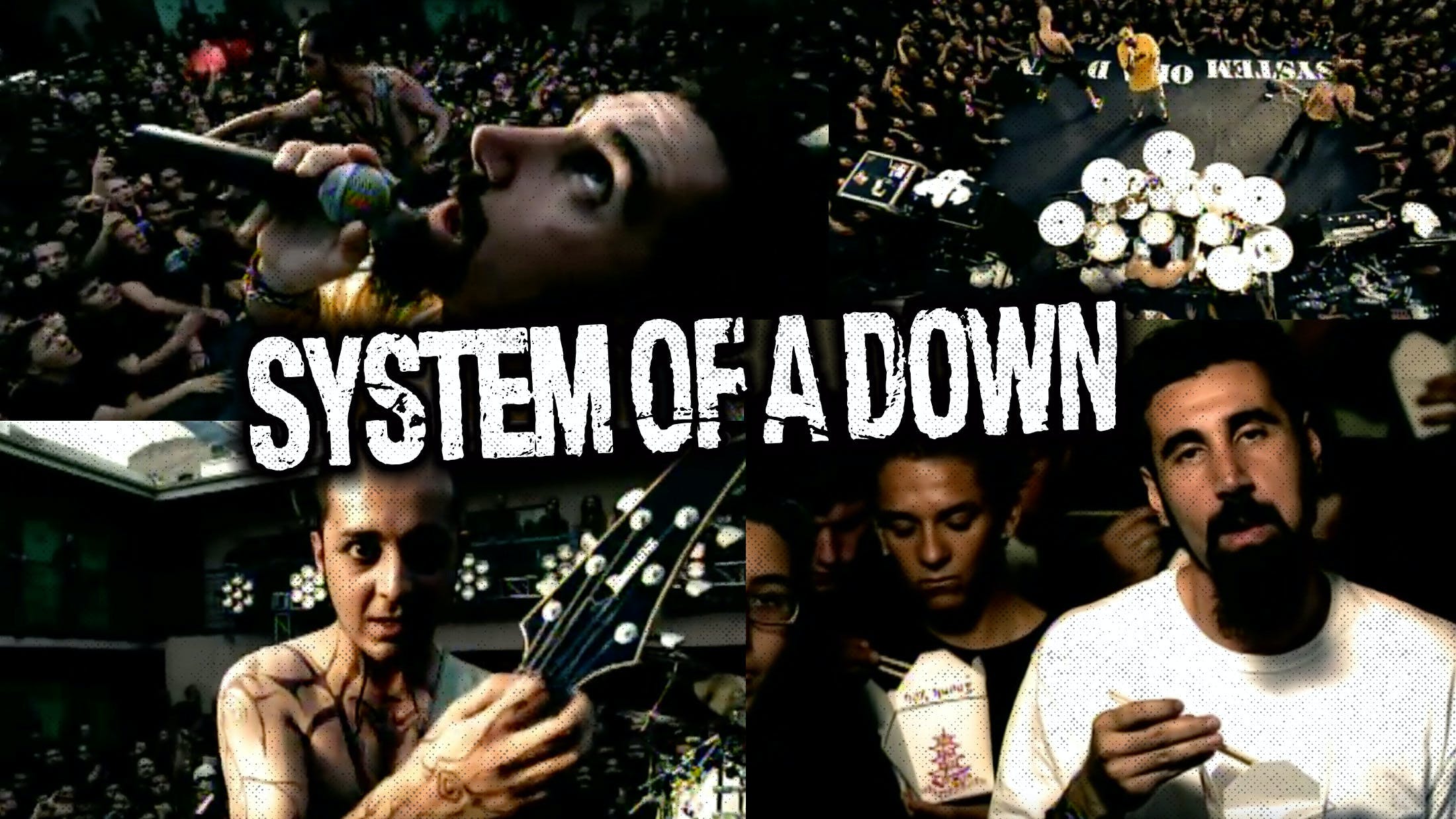 0.02
Look at all those people. Wonder what they’re here to see.

0.17
There are a lot of pieces in John Dolmayan’s drum kit. That must be an absolute fucker to put together.

0.20
One of nu-metal’s most famous beards there, bassist Shavo Odadjian’s brilliant braid.

0.26
Guitarist Daron Malakian spends this whole video gurning and doing big crazy things with his eyes, all while covered in a giant fake tattoo. It’s great – he looks like a proper maniac throughout. The tattoo thing is weird, though. It’s definitely not real, as there are endless pictures of him taken more recently where you can see his arms and chest. It just seems unnecessary – he’s so good at the crazy-eyes thing that he’d be just as grandma-upsetting (which he really seems to be going for in this) without it, and there’s just something a bit… shit about drawn-on tattoos.

0.34
Serj is doing various 'pretending to do X' dance moves here, including 'drawing back a bow' as well as the more traditional air guitar and bit of the more leftfield air keyboard. Excellent stuff, even if he didn’t get the, 'Guys, we’re not wearing shirts today' memo.

0.45
You could be forgiven for assuming, in a band with dual vocalists, that one would sing the main vocal and one would do the echo, but System Of A Down don’t necessarily do what you might assume – Serj Tankian doing both parts is proper above-and-beyond shit. It’s not just the video forcing them to recreate the album version either – they do it live.

0.49
Oh, duuuuude, everyone’s coming through one another. MAYHEM. Serj is doing a sort of 'capricious trickster' thing, there’s just a lot going on.

1.00
The line 'I don’t think you trust in my self-righteous suicide' led the song to be placed on a list of songs that were unofficially banned from U.S. radio stations after the terrorist attacks of September 11, 2001. Clear Channel, the company that owned the most radio stations in the whole U.S., sent a list around advising that songs containing certain words or ideas were kept off-air. At least System Of A Down only had one song on the list – Rage Against The Machine had their entire discography included.

1.15
Daron Malakian told the NME that the crux of the song is how death, and the cause of death, affects how we view people. "The song is about how we are regarded differently depending on how we pass,” he said. “Everyone deserves to die. Like, if I were now to die from drug abuse, they might say I deserved it because I abused dangerous drugs. Hence the line, 'I cry when angels deserve to die'…”

1.21
This camera effect, where it stays focused on a person’s face as they lurch through the world, is called Snorricam. It’s used really well in The Hangover, 28 Days Later and Get Him To The Greek. It’s very good at producing a disorienting, 'Haha, wow, so sodding drunk' feeling.

1.36
They’re, like, disappearing and reappearing? Director Marcos Siega has made some all-time classic videos, including Weezer’s Hash Pipe, Blink-182’s All The Small Things and Papa Roach’s Last Resort.

1.38
That flag being waved in the background is that of the Armenian Soviet Socialist Republic, which stopped existing when the USSR dissolved in 1991. All four band members are Armenian-American – although only Odadjian was born in the ASSR, while Tankian and Dolmayan were born in Lebanon and Malakian in LA – and the band has several songs about the Armenian genocide of 1915. They all appear in Screamers, a documentary about that event and modern-day genocide denial.

1.48
Initially, the song was going to be called Self-Righteous Suicide, but the band’s record label weren’t keen on the title. Producer Rick Rubin was up for fighting with them – he had come up against the same label, Columbia, working with Slayer – but the band came up with their own solution using the first half of the offending word. “I remember wanting to go to the mat and keep the title, and the band decided, “Let’s call it ‘Chop Suey!’” which I thought was kind of funny,” he said.

1.51
And look, there is some actual chop suey being eaten. There are conflicting stories about the origins of chop suey, but it is thought to be more of a Chinese-American creation than a solely Chinese one. There’s no one set recipe, due both to its murky origins and its literal meaning of 'odds and ends' – it’s a dish that can contain pretty much anything found in a Chinese restaurant kitchen.

1.58
Like, if Malakian didn’t have the big wacky fake tattoo, he’d still look scary, wouldn’t he? He’s so good at the eye thing. Malakian’s current project is Scars On Broadway, a more classic metal-inspired band. Their second album, Dictator, came out last year.

2.06
John Dolmayan was also in Scars On Broadway for a while, and has also played with Killing Joke, Scum Of The Earth and Tool. He also owns a comic book shop in Las Vegas, Torpedo Comics.

2.13
The band’s ability to switch style and tone at the drop of a hat and go from this almost choral-sounding part to big giant riffs, is part of what attracted Rick Rubin to working with them, co-producing the album with Tankian and Malakian. He told Rolling Stone: “When I first saw System Of A Down, I loved them so much, it just made me laugh. There was no point of reference. It was so unusual. It's hard music, but a lot of hard music sounds very similar. This is hard, but it's playful, and it's really danceable and funky. And the emotion of the performances, it really reaches me. I love it.”

2.24
Rubin is very open about how strange an offering this song is as a big single, but that’s what he likes about it, even if he can’t quite remember the words. “It's an unusual song because the verse is so frantic. The style is so broken up and unusual. It's both difficult to sing and arguably difficult to listen to, but then the chorus is this big, soaring, emotional, surging, beautiful thing. And then it's got this incredible bridge, 'Father, father, father, do you commend my spirit? / Father, why have you forsaken me?' It's just real heavy, biblical and grand. It's so unusual that it goes between these crazy rhythmic explosive verses into this emotional, anthemic ending.”

2.44
See those excited fans? Three weeks or so after this single dropped, the band staged a free concert in LA to launch the album Toxicity, and everyone got so excited it descended into a full-scale riot. They were scheduled to play at 4pm, but more fans than expected showed up, leading to delays and eventually officials announcing at 4:30pm that the concert couldn’t go ahead. The crowd reacted quite dramatically, rushing the stage and destroying the band’s equipment to the tune of $30,000. Six people were arrested. In Louder Than Hell: The Definitive Oral History of Metal, Malakian said: “Close to 10,000 kids showed up. We said, 'Can we at least address our fans and let them know what's going on, 'cause some of these kids slept on the dirty floor overnight just to watch the show.' They said, 'Nope, You guys can't get anywhere near the show,' So what they did to tell our fans was to just drop our banner and tell everyone, 'Just leave.' The fans thought we didn't show up. At first, they were upset at us and that's why they trashed all our stuff. It was crazy. They were getting shot with rubber bullets and there were horses and all kinds of riot control going on. They put us in a van and took us to some nearby hotel, so we turn on the TV and on every channel, 'There's riots in Hollywood' and it was mine and Serj's face coming up on the TV. I didn't like what I saw with what was going on in the streets. But I also looked at it and I was like, 'Wow, this is really gonna make us a popular band.’"

2.59
Shavo Odadjian has directed a bunch of the band’s other videos, as well as videos for Taproot and Bad Brains. He also does the stage design and backdrops for SOAD, and has directed adverts for Mortal Kombat games. He’s also performed as part of George Clinton’s band and worked extensively with members of Wu-Tang Clan, including a lengthy collaboration with RZA called AcHoZeN. Awesomely, a pre-fame Odadjian appears briefly in AC/DC’s video for Big Gun (which, due to its use in the film Last Action Hero, primarily stars Arnold flippin’ Schwarzenegger). He also appears in Zoolander as one of Hansel’s posse.

3.04
Tenacious D sort-of-but-not-quite covered it as well, gibberishing the hell out of it before transitioning into one of their better known tunes.

3.15
Malakian wrote what became Chop Suey! while on the road, specifically trying to do something different to what the band had done on their debut album. "I wrote that in the back of the RV," he said. "With that, I didn't want to repeat myself. I didn't want to write Pluck again or Suite-Pee again. I wanted to explore something different. At the same time, I wanted to retain our style so I put a lot of the ideas together."

3.19
Says Rubin: “It's just a very unusual song, and the fact that it became a hit is really unusual, because it's such bizarre music. I was shocked when Serj first sang the verse to me. It's like, 'You really want this to be the verse?' And he's like, 'Yeah.' He loved it. And it holds up. You have no perspective on something like this the first time you hear it. But the thing that's so exciting about that band is how they take these unusual ideas and execute them on a high level. They can take something that seems really awkward and convey it in a way where you can see it as beautiful. It forces you to open your mind.”