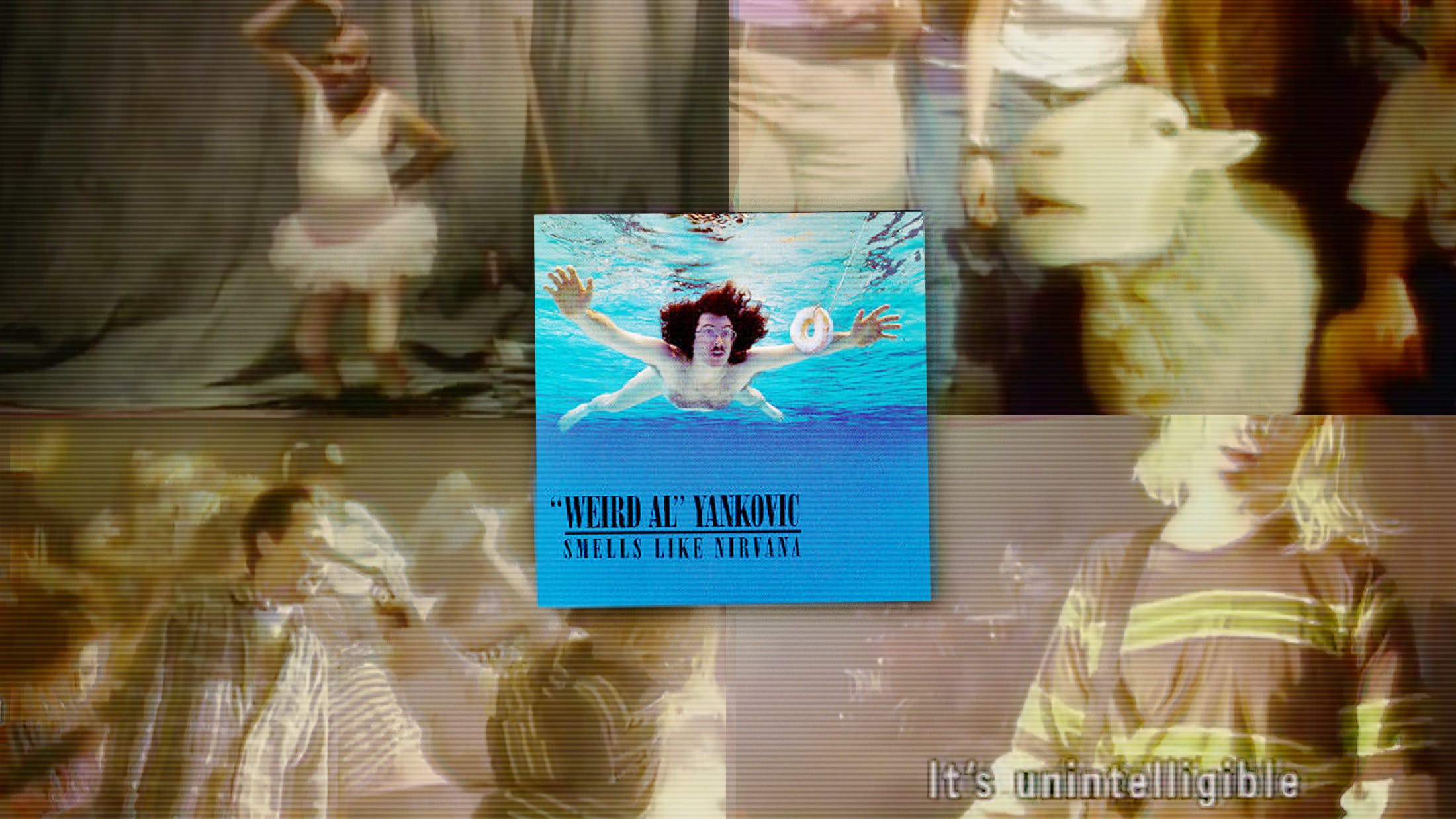 “Weird Al Yankovic is America’s modern pop-rock genious” wrote Kurt Cobain in his journals, and while the Nirvana man's spelling might have been a bit dodgy, his sentiment was correct.

Weird Al has dived into the rock world a few times – his Alternative Polka and Angry White Boy Polka include a lot of K! stalwarts, and he has parodied artists like The Offspring, Red Hot Chili Peppers and Green Day – but never more perfectly than with Smells Like Nirvana, a hilarious skewering of how impossible to understand Kurt’s lyrics were.

0:01
As the video begins, you’d be hard-pressed to know it wasn’t the original. Director Jay Levey – Al’s longtime manager, who also directed another dozen or so of his videos and his cult movie UHF – set out to ape the original as closely as possible. Jay told Spin: “All the stars aligned. We were able to track down and book the same soundstage. The soundstage, in essence, is four bare walls, so you could be in any soundstage and not know it was the one. But from a karmic standpoint, it was pretty heavy to be in the exact same place where they shot theirs. The vast majority of the fans in the bleachers were from the original Nirvana video.”

0:08
The drummer wearing a shirt labelled ‘DRUMMER’ and not being Dave Grohl is pretty much the first sign that this isn’t the real deal. That is Al’s longtime drummer John ‘Bermuda’ Schwartz doing his best Dave Grohl impression.

0:13
That one particular cheerleader isn’t in the original video either. Some of them were though. Kurt had complained about the cheerleaders used on the Smells Like Teen Spirit shoot, saying they were too slim and pretty.

0:17
This janitor, Tony De La Rosa, is the same guy as in Nirvana’s original. “I don’t know that he even knew a thing about Nirvana. I believe he was a real janitor,” said Jay. Al later brought him back for another video, You Don’t Love Me Anymore, a parody of Extreme’s More Than Words clip.

0.23
That is the late Dick Van Patten, as seen in Spaceballs and Soylent Green, and long-running U.S. sitcom Eight Is Enough. Dick also founded pet food company Natural Balance. His being in the video came about because of a decision that they should get someone famous in the video, and someone on the shoot having Dick Van Patten’s number for some reason.

0:24
There’s ‘Weird Al’ himself. He was a Nirvana fan before most, and was delighted when they broke through and became big enough to make fun of. “I honestly didn't think the song would ever be ‘mainstream’ enough to merit my doing a parody of it,” he told Esquire. “When Nevermind shot up to Number One on Billboard, of course I thought otherwise. The main thing that everybody – even the VJs on MTV – were saying about the song was, 'What in the world is he talking about?' The lyrics, even when intelligible, were hard to decipher. So that became the main joke of my parody. I try not to go the obvious route all the time, but sometimes the most obvious is actually the best.”

0:56
Drummer John was urged to bring out his inner rock god for the shoot. “Al’s manager was concerned that I wouldn’t be as rock’n’roll,” he recalled to Spin. “He wanted to make sure I knew there was a lot of head-banging, that’s what Dave Grohl was doing. My neck was sore for about three weeks. It’s hard to tell with that slow-motion footage, but I hit that pretty hard. I don’t know how drummers hit that for real.”

1:17
Lovely rubber guitar work there. Al only learned to play the guitar in 2017, debuting it onstage the next year – while he was frequently seen holding guitars before then, they functioned only as props. Guitarist Jim West has played with him since the early 1980s.

1:25
While laughing at the unintelligible nature of Kurt’s vocals struck Al as the most obvious gag to go for, Kurt assumed he’d do a song about food. A lot of his songs had food gags in them, including his two high-profile Michael Jackson parodies (Fat and Eat It). Their conversation took place while Kurt was on set at Saturday Night Live. Al had just been in a film with SNL star Victoria Jackson, so used that connection to get through. “My manager was having a tough time getting through to his people, so I find out that he’s going to be doing SNL, and thought, ‘I’ll just call him up,'” Al later recalled to Howard Stern. “I told [Kurt] I want to do a parody of Smells Like Teen Spirit, and his first thing was, ‘Is it going to be about food?’ and I said, ‘No, it’s going to be about how no-one can understand your lyrics.'”

1:30
Al claims the words 'bargle nawdle zouss' came to him in a dream. He performed this section of the vocal track with a mouth full of cookies.

2:08
Krist Novoselic later recalled worrying that Nirvana would be mercilessly mocked, but found himself thoroughly enjoying the end product. He said, "When he made the video with the same soundstage, using so many similarities, with the cows and pigs going around we thought, ‘Oh he’s going to tear us apart,’ but then we saw the video, and just started laughing, it was really funny, really good.”

2:14
Dave Grohl’s later band Foo Fighters were later included in Al’s 1995 medley Alternative Polka, with I’ll Stick Around’s refrain of, 'I don’t owe you anything!' yelled in it a few times. On his 2018 tour, Al performed a straight cover of Foo Fighters’ This Is A Call.

2:17
Al performs this gargle solo live at every show, which is fairly amazing.

2:21
The “more is more” approach to jokes has got Al a long way. It would be a joke to have a basketball game going on while the band performs, but to them have a player get knocked out by a ball and then a dude run through on fire, all while gargling? That’s good value.

2:23
While the real Nirvana were all for the parody, the original Smells Like Teen Spirit video director was less enthusiastic, with Jay Levey remembering getting some un-stoked vibes from Samuel Bayer. “I had one extremely brief conversation with him where I think he was a reluctant participant in the process” he remembered. “Meaning, he was certainly going along with it, but he was a true artiste, you know? Of all the original players, he was probably the least enthused.”

3:21
Somewhere in the crowd is a young, pre-fame Tony Hawk.

3:35
Kurt supposedly said that Al’s parody made him feel like Nirvana had really made it. The two of them met only once, in a restaurant in Los Angeles. “He just happened to be eating at an adjoining table with his friends,” remembers Al. “This was after the parody had come out, so I got to go over and thank him in person. I just profusely thanked him and said, ‘Anything I can do for you, let me know.’ Kurt extended his hand to me and said, ‘Polish my nails.’”