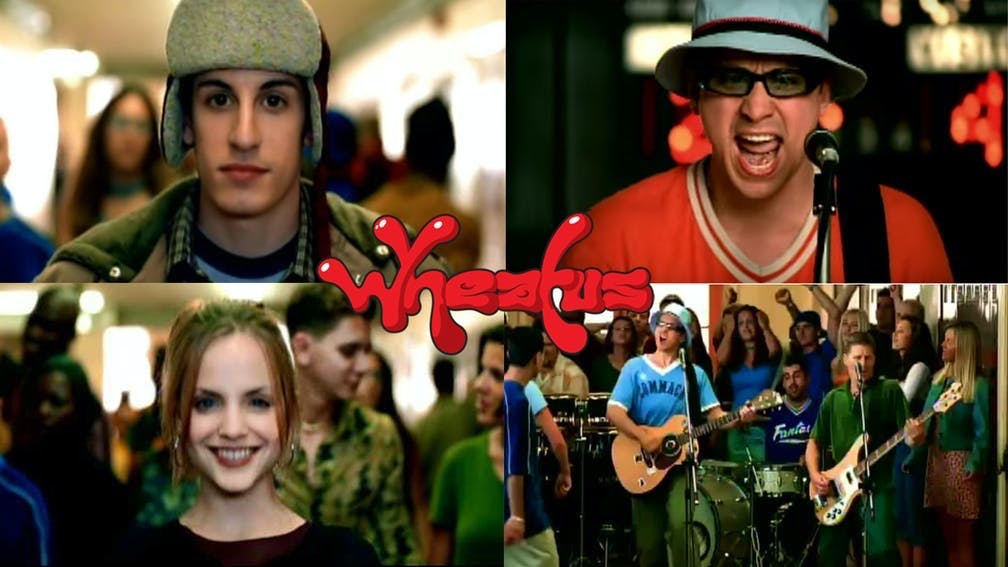 If you ever have to do karaoke against your will and are self-conscious about your voice, you have two choices. Either do Party Hard by Andrew W.K. and shout and jump about a lot like a massive ledge, or do Teenage Dirtbag by Wheatus, because everyone else will sing along with you and drown you out. It’s one of those songs that everyone somehow, through some sort of cultural osmosis, knows all the words to, even if they’ve never consciously listened to it.

Let’s dive right in to this big bag of adolescent dirt. Wahey!

0.01
This is footage from the movie Loser, directed by Amy Heckerling and starring Jason Biggs, Mena Suvari and Greg Kinnear. While all the rest of the video is newly shot, for some reason they’ve used this clip as a not-amazing wraparound device framing the whole thing as a dream.

0.10
Jason Biggs is best known for appearing in the four American Pie films as Jim, the main character and pastry-enterer. More recently, he played the absolute worst character in Orange Is The New Black.

0.12
This is Brendan B. Brown, the only remaining founding member and sole songwriter of Wheatus. The band has toured with umpteen different lineups with Brown (known as BBB to hardcore Wheatus fans) as the one constant. Commack, as seen on his shirt, is a small town in Long Island that features heavily in follow-up single Wannabe Gangstar.

0.22
Noëlle is a French name that means Christmas. It’s got an umlaut, so is very slightly metal.

0.26
Mena Suvari only appeared in three of the American Pie films (missing the third one) but made up for it by also starring in American Beauty and American Virgin, as well as two seasons of American Horror Story, comedy series American Woman and a guest appearance on American Ninja Warrior. THAT IS SO MANY THINGS WITH ‘AMERICAN’ IN THE TITLE.

0.29
Something that’s kind of strange is that the video and song are very much about being in high school, while the film is set in college and Biggs and Suvari are in their twenties.

0.40
Why is bongo drummer and turntablist Peter McCarrick Brown shaking a banana and an apple? Not a fucking clue, but he looks very pleased with himself.

0.58
The origins of the song come from a grisly murder that took place when Boyd was a child, involving an older child that had bullied him. He told Tone Deaf: "It came from the summer of 1984 on Long Island, when I was 10 years old. That summer in the woods behind my house, there was a Satanic, drug-induced ritual teen homicide that went down; and the kid who did it was called Ricky Kasso, and he was arrested wearing an AC/DC T-shirt. That made all the papers, and the television, obviously; and here I was, 10 years old, walking around with a case full of AC/DC and Iron Maiden and Metallica – and all the parents and the teachers and the cops thought I was some kind of Satan worshipper. So that's the backdrop for that song. So when I sing: 'I'm just a teenage dirtbag', I'm effectively saying: 'Yeah, fuck you if you don't like it. Just because I like AC/DC doesn't mean I'm a devil worshipper, and you're an idiot.' That's where it comes from.” Kasso is also pictured on the cover of 2009’s The Lightning EP, and the subject of the song From Listening to Lightning. Boyd says the murder changed his life, telling Verbicide magazine: “The impact that had on my life and music is complete. I would have been a very different person had Ricky not sacrificed his classmate to the devil, two blocks away from my house in 1984.”

1.07
He’s got the same shirt in both blue and orange. Someone’s doing alright.

1.22
The word “gun” was censored in the song because the week Brown presented it to Sony was the one-year anniversary of the Columbine massacre.

1.35
That Iron Maiden shirt is all creased but seems to depict Eddie as seen on the Somewhere In Time cover where he’s all future-y. Plus, artist Derek Riggs and Jason Biggs have rhyming surnames.

1.38
Suvari has a big Wheatus sticker on her notebook.

1.42
Lots of people thought this song was by Weezer – the two bands have vaguely similar names and are fronted by bespectacled white men with brown hair, plus Weezer are fans of giving shoutouts to metal bands – to the extent that Weezer began covering it at shows after endless requests.

2.07
Loser isn’t very good, unfortunately. It’s got some really funny bits, and some fun cameos, and everyone does a good job, but it’s just a bit nothingy. Plus it’s weird seeing the two of them get together when they were in American Pie together paired up with different partners – it’s like a weird alternate universe thing. There’s also an Everclear cameo.

2.34
Ruffle-front dress shirts in pastel colours are a perpetual go-to in teen movies (again, the movie this is from is about college students) to make dorky characters look super-dorky.

3.18
Wheatus ended up working with Maiden’s Bruce Dickinson, sort of – a remixed version of their extremely bad follow-up single Wannabe Gangstar featured Dickinson doing backing vocals and contributing a few wails. He’s in the video (directed by the same guy as this one, Jeff Gordon) briefly. It’s bad, though, it’s really bad.

3.52
Something that is always nice to see is someone holding aloft two tambourines triumphantly. It’s not something that comes up a lot.

4.06
So, a disco ball falls on Jason Biggs’ head and then he wakes up (and returns to recycled movie footage) because it was all a dream? Yeah? It feels like it doesn’t need to be – can’t it just be a nice story of two people going to a Maiden show together? Eh, creative choices and everything. Well done everybody.