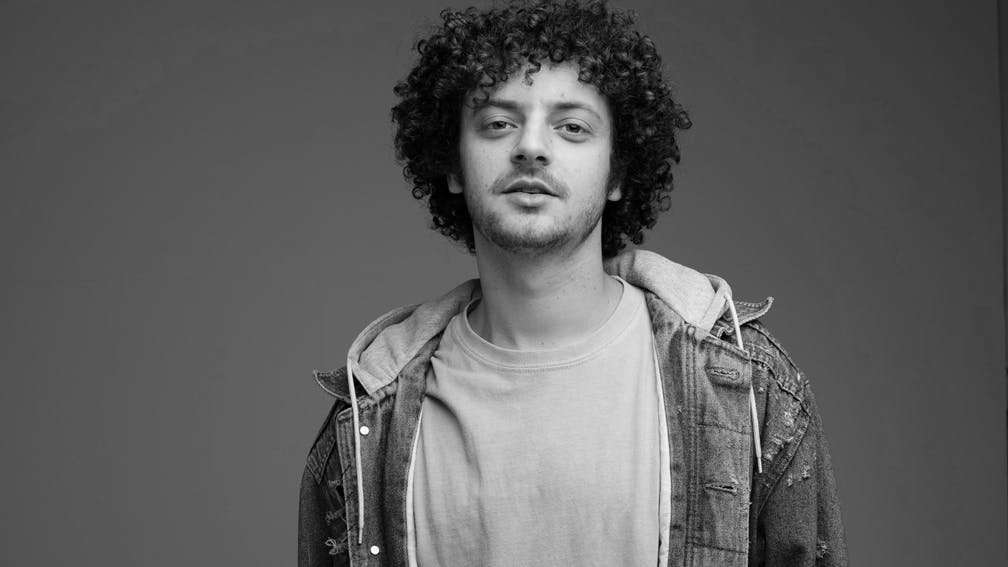 Have you ever wondered what it would be like to star in your own erotica fan fiction? Probably not. That would be very weird indeed. Jordan Edward Benjamin – better known as politically-charged alternative hop-hop artist grandson – probably never wondered, either, but he doesn’t have to anymore. It happened – and his, erm, co-star was Mike Shinoda, no less. He’s also eaten turkey testicles while backpacking around the Middle East at the age of 19 – and not by accident, either. But it’s good to try everything once, right? Well, maybe everything except eating turkey testicles. Find out what other weird things have happened to the 26-year-old below…

When you were a kid, what did you want to be when you grew up?
"You know what? I really had no idea. I think there were times where I thought maybe I’d be a teacher, or maybe I would work at a record label or a radio station, but I never cared enough about anything to want to be the best at it until I found music. And I think that if I wasn’t doing this I would be somewhere trying to do this in some capacity. I really can’t imagine anywhere else I would have found a sense of home in myself."

What happens when we die?
"I think we decompose in the ground and I think people that love us miss us and tell stories about us. I don’t think there’s anything beyond that, but I’ll let you know when I get there."

What would you like it to say on your gravestone?
"Oh man. I’m actually not very interested in a proper burial like that; I think it’s a waste of space. So maybe it’d be a placard behind a tree or something, but I don’t know what it would say. I’d hope that someone would care enough to write it for me."

What’s the funniest rumour you’ve ever heard about yourself?
"One time, a fan messaged me a weird erotica fan fiction about me and Mike Shinoda. It’s not really a rumour, but I’d say that’s the weirdest thing that’s ever happened to me along those lines. I don’t know if I even told Mike about it – that someone imagined us in some weird, clandestine relationship together. And that was when I knew to stop checking my DMs!"

What was the last lie you told?
"You’re putting me on the spot now! It was probably when I told kids that if they reached 5,000 comments on an Instagram post I would give them a preview of my new song – and then I made them get all the way to 20,000!"

What’s your biggest fear?
"My biggest fear is waking up one day with deep, deep existential regret and wishing I could have done it all differently and realising I wasted time. So, time. I think all that other shit about spiders and forgetting the words onstage – I’ve done a lot of that stuff and lived to tell the tale, but the stuff to do with time, they’re the most expensive mistakes you can make."

What’s the most disgusting thing you’ve ever eaten?
"I was backpacking in the Middle East one time and found myself eating a plate of turkey testicles on yellow rice. It was actually not that bad – the consistency was one of the most disgusting things ever, but the flavour was not that bad. I was about 19 and went up to the counter and asked him, despite the language barrier, if he could serve us the weirdest thing that they had, so I knew that I wanted to get into something weird!"

What’s the worst job you’ve ever had?
"I used to work canvassing for charities and that was a very difficult job for me, because I don’t do well with authority. I had this one experience where they put me in a vest that said ‘Because I am a girl’ in big, bright letters and they had me go to neighbourhood and try to sign people up for this charity, and the neighbourhood they happened to choose was the neighbourhood I grew up in. So I had to spend the afternoon with relatives and friends and acquaintances from school walking by to go to their jobs, while I stood there in a vest that said ‘Because I am a girl’ asking them for their credit card information."

Have you ever stolen anything?
"Yes. I went through a nasty little phase when I was transitioning through high school into adolescence where I used to do a lot of petty shoplifting. And it was really not very cool. Thankfully, I got caught one time and they called my parents. I was still underage, so they didn’t call the cops – it was between calling the cops and calling my mom and I secretly wished that they’d call the cops, but once my mom got involved, that was the end of that."

Have you ever been in a fight?
"I have, unfortunately. A couple of times. I got jumped in high school. It was at a house party or something and I guess I’d pissed off a couple of dudes on the rugby team or something – but it gave me all of the anger that I now, 10 years later, get to jump around onstage with."

If your house was on fire, what’s the one thing you would save?
"My cat. I think he’s about three, but who’s to say? He’s anywhere between three and 800 years. He’s got an old soul."

Ahead of the movie's arrival in cinemas on July 30, an entertaining new trailer for James Gunn's highly-anticipated The Suicide Squad has landed…