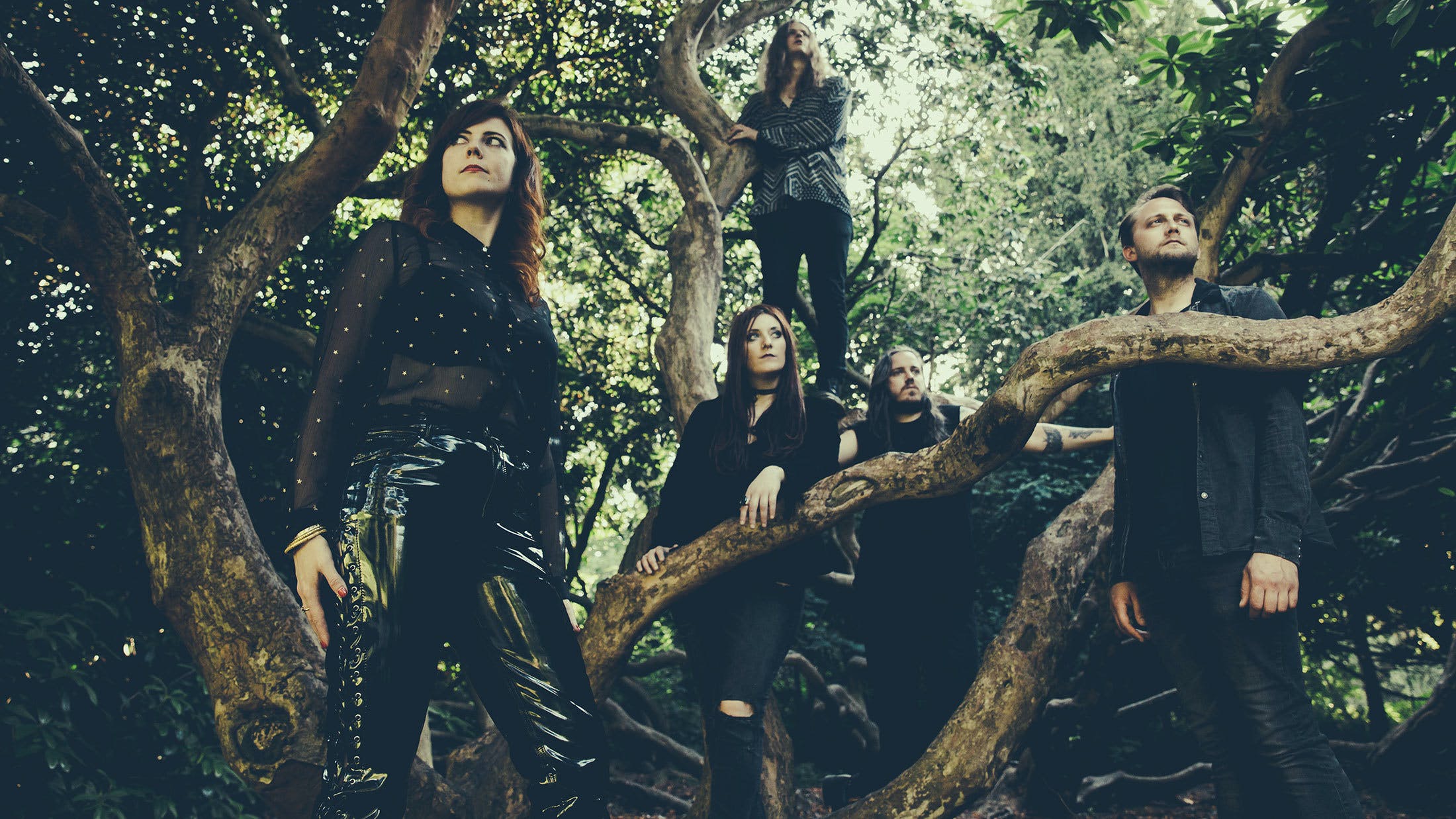 This weekend, Leeds-via-London stoner metallers Black Moth will play their final shows. After breaking onto the scene in 2012 with debut full-length The Killing Jar, they harnessed the power of the occult and the morose with a healthy dose of Black Sabbath, Nick Cave and Uncle Acid to become one of the brightest lights in the British stoner/doom scene. However, such is life, circumstances didn't work in their favour.

Their final album, Anatomical Venus, was recorded a year before it was eventually released, which ultimately slowed the band's momentum – leaving over three years between records.

"The album was done but we weren’t out there promoting it," vocalist Harriet Hyde tells Kerrang! from the comfort of a north London pub. "Although we did some really nice things off the back of it. We toured with L7, played with Sleep, which for us were ultimates. Hearing Donita (Sparks, L7 vocalist) say to the crowd that I was their frozen embryo child (laughs)… It genuinely made me cry.”

Couple the delay with the fact that Black Moth's lineup are split across England – two members living in London, and three living in Leeds – made touring and rehearsal a trying ordeal.

"I quit so many jobs because we’d been offered a tour, and you can only do that for so long. What’s sad is you’ve got five people who have this incredible chemistry for making music together, but it all ends up being frustrating because you can’t scrape two hours together on a Friday night."

Logistically, it became impossible to carry on. Harriet herself was burning out, using every available holiday she had to go on tour, she never found time to actually rest.

"There was a heartbreaking moment where we were playing Vienna on tour and I was desperate to go see Vienna. Did I see it? Did I fuck!" she laughs. "I saw the back of a van then a venue, then we left."

Ultimately, Harriet wrote the band an email, calling time on Black Moth. Admitting it was a hard pill to swallow initially, the rest of the band agreed that the band should leave it at the three albums they're proud of, instead of "pissing it away and falling out."

Here, we talk to Harriet about the legacy of Black Moth, what she's learned, and what she hopes for the future of the music industry.

Even though it was a choice, you must be gutted it's over.
“Anatomical Venus said what I wanted to say. It was an offering that was a very woman-centric, feminist album that we made. Until that point we just happened to be women in a band. It was important to do it because I think a lot of people were like, ‘God, why are people even mentioning that we have female genitals, what does that have to do with it?’ But also, I do think as a woman you have a different experience to a man in any situation, and in a very male-dominated world you want to show that you can do as men do. But also your experience is different by way of being a woman, so I wanted to make a record that did properly respond to that. There was a very immediate response where there were a lot more teenage girls rocking up at the shows, coming up and thanking me for the lyrics and inspiration. That’s the point of owning what you’re doing as a woman, it’s not incidental.”

If you’re receiving such a strong reaction from fans, the logic isn’t to just stop.
“I started to find touring really difficult. I read a Leonard Cohen quote that I loved and seemed to hit the nail on the head, ‘Tours are like bullfighting, they’re a test of character every night.’ They bloody are! And women are cyclical, quite literally, so one night you might be ovulating and be like, ‘I’m the fucking queen of the world, I’m going to own this,’ but then you’re still on tour every night. But it’s the same for men and women. Putting yourself up there and performing on the days where you just want to be huddled in a ball started to feel very difficult. We all have our strong days and our mental health days, but you just have to get up there and do it anyway.

“We’re all in our 30s now, but the sad thing is that as musicians ripen and get better at what they do, life is also getting harder. You need to make a living. Everyone knows, but no-one talks about how it’s near enough impossible for bands. You’re touring with big bands and people think you’re in champagne hot tubs (laughs).”

Did you ever think it was going to be like that?
“The priority for us has always been about making the music we want to make. I don’t think we ever expected with the music we’re making to make millions, or even to make a living, but we weren’t even scraping by. The band was almost always operating at a loss and that’s not unusual at all. The bigger you get, the more outgoings you have. As life gets harder you need to support yourself, and you’re a musician alongside that, so it’s like a full-time job, but also your heart and soul’s in it. It’s a real testament to how important music is in life that people continue to do this. People do this until they’re rammed into the ground and penniless. I know people that’ve lost fiancées and given up so much, putting all their eggs in one basket and can’t make a living. That’s real. Fans need to know that musicians are real humans.”

Do you see yourself doing anything else musical?
“I think we’ll all do bits and pieces on a casual basis. Nico, our old guitarist, has a rockabilly/surf punk band called X-Ray Cat Trio and I’ve been doing a bit of singing on some doo-woppy tracks, which is ace. I’ve started doing dark versions of Everley Brothers’ songs with friends, just getting back to the roots of it all. Then we'll see what happens.”

Is there anything you wish you’d have done differently?
“I think I’d have been even bolder. It took me a while to land in my own skin, just through growing up. I have a much bolder sense of who I am now, I found it a lot harder when I was younger – finding how to present myself onstage as a woman. I went through all these different phases of glamming up, then suddenly feeling quite exposed by reviews pinning me as some kind of sexy frontwoman. So then I went full grunge to hide myself away… Maybe I would have just said, ‘Fuck it’ earlier on and just been who I wanted to be. I think this is why I’m excited for the future and I’m happy to hand the torch to other women coming through. We’re living through really exciting times. We’re not even thinking in binary terms about men and women any more. It’s amazing to see more trans people in rock’n’roll. I have a lot of hope for the next generation.”

No regrets?
“No regrets. We did what we did. I think we appealed to the weirdos, the real weirdos. I went to see John Waters earlier this week, I’m a massive fan, and I’m just reminded of how in awe I was of how he made art that really celebrated the weird, the perverted and the odd. And that’s what I wanted our songs to do. Some of our songs are really weird and perverted and dark and odd (laughs). Maybe that’s what we’ll be remembered for.”

It's a shame you didn’t make more money doing so...
“(Laughs) Yeah. It’s a weird thing to say because it’s not romantic. People like to think of their rock stars and musicians as being tortured poets doing it for the love of it, and I’m sorry, but we’ve got to fucking live like anyone else! We’re living through weird times where music has become an unlimited free resource. You don’t have to pay for it anymore. That’s great in some ways, of course, but people have to realise that a lot of musicians can’t afford to do what we want to do. We’re not asking to be Bono in a mansion. It would just be quite nice to carve a life for yourself that supports your creativity in making music alongside being able to live. And have solid mental health because we’re not exhausted and constantly trying to achieve something in a hostile environment.”

What change would you like to see in the industry to keep bands going longer?
“If I had the answer I would probably be a millionaire right now. Everyone is asking, ‘How does the music industry recover from this strange situation where the product isn’t the actual music, it’s merch and live?’ I wish I had an answer. In other countries the government invests in the arts more, there’s more support, more funding. But fans, please buy the records. Try before you buy, but buy it. Or buy the merch if you don’t want the records. Understand that bands are working bloody hard to do what they do, and if you like something then support it. Nothing in this life is really free. Our time isn’t free. Our energy isn’t free.”

READ THIS: 12 movements in rock that everyone should've seen coming