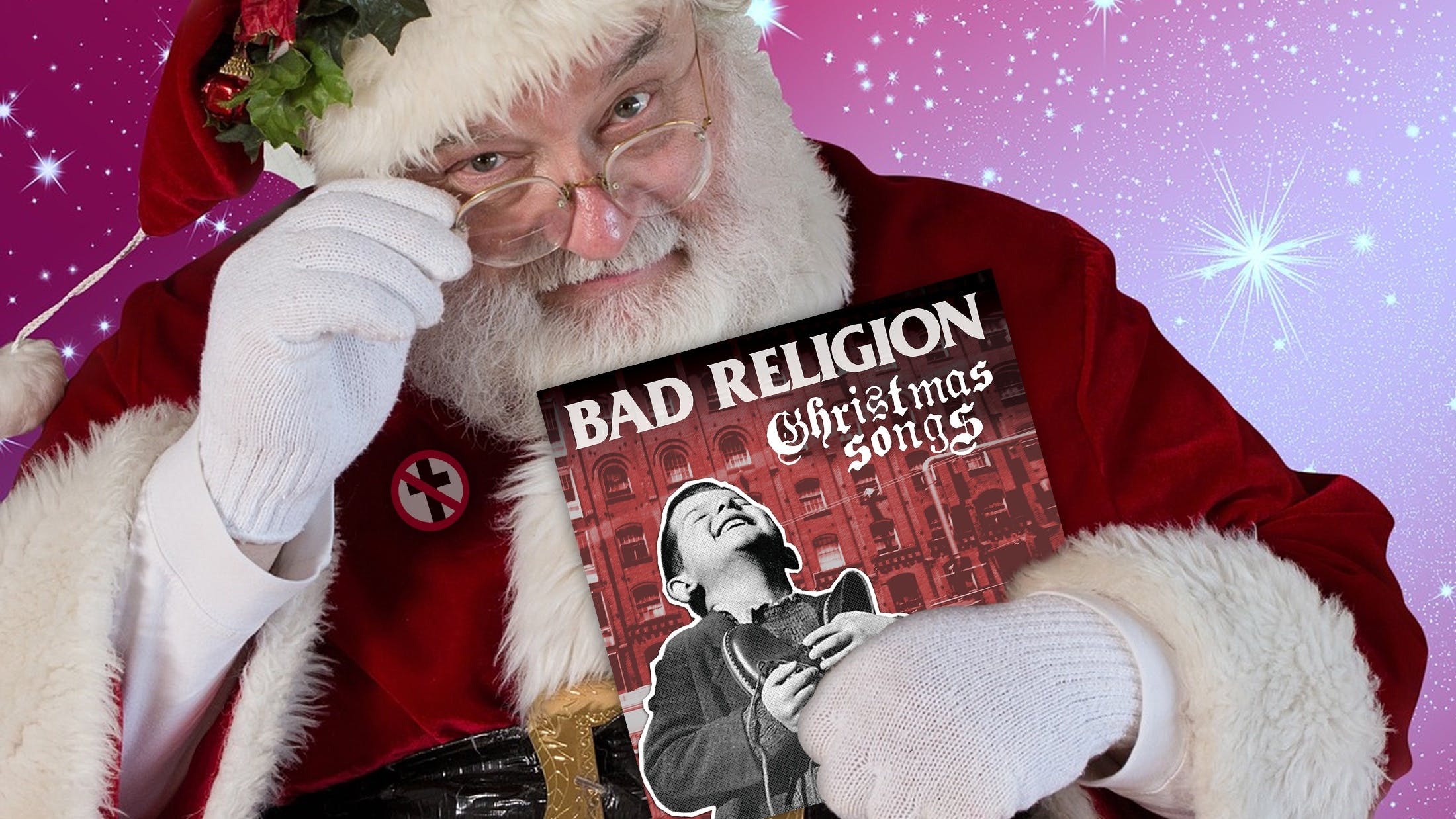 In the lead up to Christmas in 1990, Bad Religion issued a track called God Song. A standout inclusion of the band’s fifth album, Against The Grain, a collection busy with standout inclusions, the song makes its point in under a hundred seconds. “Now we all see, religion is just synthetic frippery,” sings frontman Greg Graffin in a voice that is equal parts erudition and honey, “unnecessary in our expanding global cultural efficiency.”

In the world of Bad Religion, all religions are, at best, meaningless. Today, as well as being the singer in the most pivotal group in the history of Californian punk rock - the band that connected the scene’s first generation to its second and who, with the release of the Suffer album in 1988, lit the fuse that would eventually lead to the punk explosion spearheaded by Green Day and The Offspring - Greg Graffin is also the professor of evolution at Cornell University in Upstate New York. But even in 1980, when he formed the band as a 15-year old, along with guitarist Brett Gurewitz and bassist Jay Bentley, the singer understood that God is a fiction created by man. As if to underscore this point, Bad Religion’s logo, ‘the Crossbuster’, features a Christian cross over which is laid a red prohibition sign.

All of which makes the band’s Christmas Songs EP the most deliciously playful release in the history of punk. Released in the autumn of 2013, this nine-song collection features a variety of Christmas hymns and standards almost all of which give praise to a deity in which the band do not believe. Given this, one of the most striking things about this exquisitely realised set is that at no point does the listener feel that Bad Religion are approaching this music in a spirit of mockery. As the quintet bounce their way through compositions such as Little Drummer Boy – in which a poor orphan plays a lone drum for the newly born Jesus – and What Child Is This? – which features a lyric that sees shepherds gaze in wonderment at Christ during his nativity – the abounding sensation is one of joy. The fact that this joy is laced with mischief does nothing to dim its incandescence.

Another striking feature is the playing, which is superb throughout. No punk band is as good at playing fast as is Bad Religion, and when the needles are driven into the red the results are dazzling. Christmas Songs is the last of the group’s releases to feature the near peerless drumming of Brooks Wackerman – these days the keeper of the beat for Avenged Sevenfold - who begins a blitzkrieg bop through Come All Ye Faithful with a flurry of drums that sounds as if he’s playing while being tasered. A hymn in three parts, at the start of each new section the players elevate their station: the drum patterns grow yet more emphatic, more layers of guitar are added, the vocal harmonies, somehow, become more bountiful.

Who says religion can’t be fun? Or, at least, that you can’t have fun with religion?

In many ways, Christmas Songs is the record toward which Bad Religion had been gearing for their entire career. This is particularly true for Greg Graffin. As a schoolboy in Wisconsin, prior to each day’s first lesson he would gather in the music room of Lake Bluff Elementary in order to practice with the school choir. Under the tutelage of teacher Mrs. Jane Perkins, he and his fellow prepubescent choristers would sing songs from the radio and, when in season, Christmas carols. These selections were duly performed at concerts attended by parents. In due course, Mrs. Perkins noticed Graffin’s talents and a bursary to a summer music camp in Madison soon followed.

“I never thought of myself as a particularly gifted singer,” he says. “In fact, I just assumed that everyone could sing the way that I did.”

They couldn’t. Christmas Songs begins with an a cappella multi-part harmony swing through the vocal melody of Hark The Herald Angels Sing! that, in seconds, puts paid to any notion that this is an exercise in punkish yobbery laying waste to the fine jewels of musical antiquity. The music that follows may surge toward speeds that border the impossible, but throughout the arrangements are expert and the band’s sense of control is total. Despite the fact that Christmas Songs was recorded by players stationed in three different parts of the United States, this is not careless music.

And neither is it carefree. A 20% cut of the proceeds from Bad Religion’s most loveable release made its way to the Survivors Network of those Abused by Priests (SNAP), a terrible reminder that prescriptive piety is still, as the band themselves put it, “overwhelming millions every day.” In this, the greatest triumph of Christmas Songs is an ironic one – the fact the splendour of Christian belief in musical form is so perfectly captured by a band that have none at all. Here, in full possession of their intellect and incredulity, Bad Religion give their full reign to the glorious music of an incredible faith.

Bad Religion are hitting the road on a huge North American tour this summer.