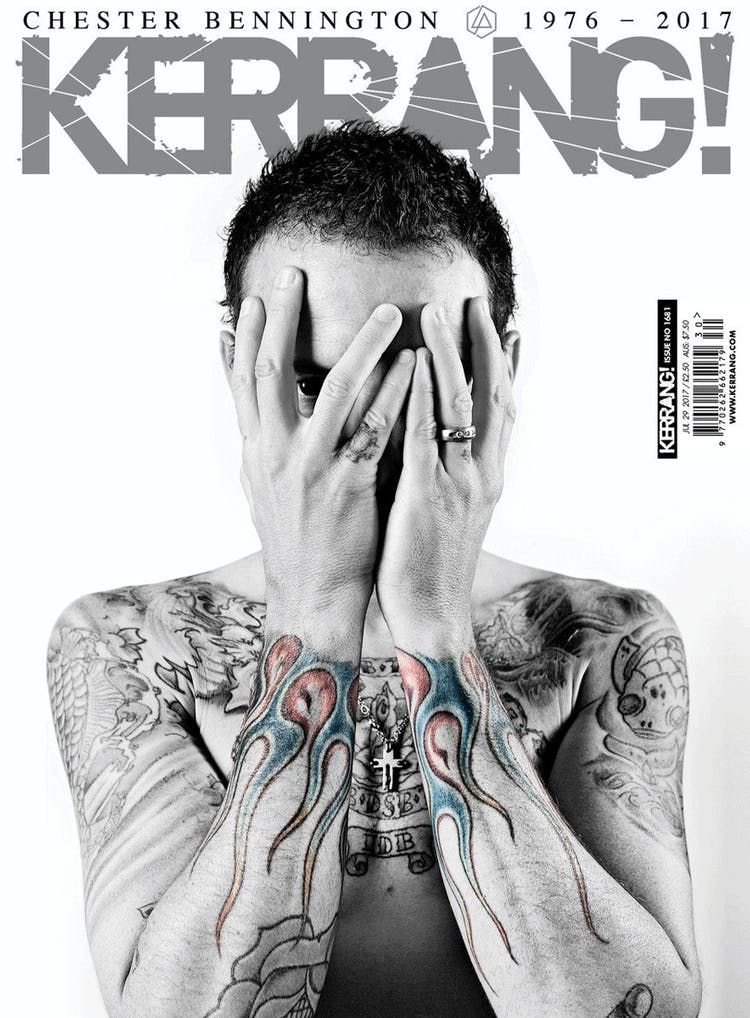 While the world of rock is still in shock, mourning the loss of Linkin Park’s Chester Bennington, Kerrang!’s Listings Editor, James Hingle, remembers the man he stood side-by-side with throughout his life, as a fan and as an admirer. Thank you for the music, Chester…

My first-ever encounter of Linkin Park was as a puzzled 10-year-old, still discovering my musical tastes. At the time, we didn’t have Sky TV or anything like that – just the standard BBC One, Two, ITV, Channel 4 and Channel 5. But it was one summer at my cousin’s house in Ireland where One Step Closer came on the TV. They had all the music channels, you see.

I didn’t know anything other than pop at this time in my life, but then I heard that voice, that emotive guttural growl of one Chester Bennington, blaring out of the TV and hitting every corner of my cerebellum. It struck a nerve instantly, and my mind had been opened to a whole new world. The blonde spikey hair, the firey wrist tattoos and the baggy clothes, the man was not only a force of nature but he was an instant icon.

And by the time I was in my final year of primary school, nu-metal was everything I was listening to; it was the first time I had connected with a genre that I found so much enjoyment from. To coin a phrase, I became a full-blown ‘grunger’ as the then-‘rude boys’ would say.

My relationship wavered with rock music over the next few years. When I went to high school, to avoid being bullied, I tried fitting in with everyone else and turned to hip-hop and rap, but deep down I knew that this wasn’t filling me with as much joy as rock and heavy music did. When I started getting bullied anyway, I turned back to rock music as my saviour. Foo Fighters were the band that got me into guitar music again, but it was Linkin Park that really had me analysing the lyrics, what they meant and how much I could relate to them at that time – it added more fuel to my teenage angst. They were a band I already knew, so naturally gravitated back to.

For me, Linkin Park are the band that allowed me to escape, allowed me to find a new set of friends, and allowed me to grow as an individual. Every time me and my best mate Sean would blare out Linkin Park, we’d both take turns being Chester and Mike Shinoda, obviously doing a horrendous job of it, but nonetheless we looked up to them and idolised the music they created.

From Crawling, to Numb, to Given Up, and even now when you look back at the lyrics from 2017 single Heavy, it was there in black and white: Chester told the world how he felt. He was one of the most honest vocalists out there when it came to his mental health – something that should encourage us all to be. However, despite his openness, there was still a darkness inside of him that led to him taking his own life. Even when he was pouring out his feelings, it still wasn’t enough to prevent suicide. It’s a sad time for heavy music, but not just for ‘our world’ per se, but to pop culture as well; Linkin Park influenced an entire movement.

In their illustrious career so far, they’ve sold over 70-million albums worldwide, headlined Download, Reading & Leeds and become a coveted stadium rock band. Myself, like thousands more, were lucky enough to catch Linkin Park play Hybrid Theory in full at Download 2014. At the time, I had just started writing for Kerrang! and the only reason I was at the festival at the time was down to the fact that Nick Ruskell – K!’s Associate Editor – decided to kidnap me at the Kerrang! Awards two nights before.

That weekend made me: it pushed my career to levels I didn’t think possible, and I was able to watch one of my all-time favourite albums performed in its entirety. To say I was lucky would be an understatement – I was on top of the world, ecstatic and completely bleary-eyed at what was happening. Anyway, enough about me – this isn’t what this is about – this is about a man who soundtracked key moments of our lives, and a voice I’ll never forget.

Chester may not be with us anymore, but Linkin Park remain one of the greatest rock bands in my generation – if not in the history of rock full stop. What has been a rollercoaster of emotions in the last day has culminated in everyone coming together. The community is grieving, but it is also opening people up more. If there’s one thing we can learn from this, it’s that no matter how you’re feeling, how scared you are, how ashamed you may be of your mental state, people are there. Whether it’s a friend, family member or even talking to institutions like the Samaritans, CALM or MIND, there are people there for you to talk to. Seek help.