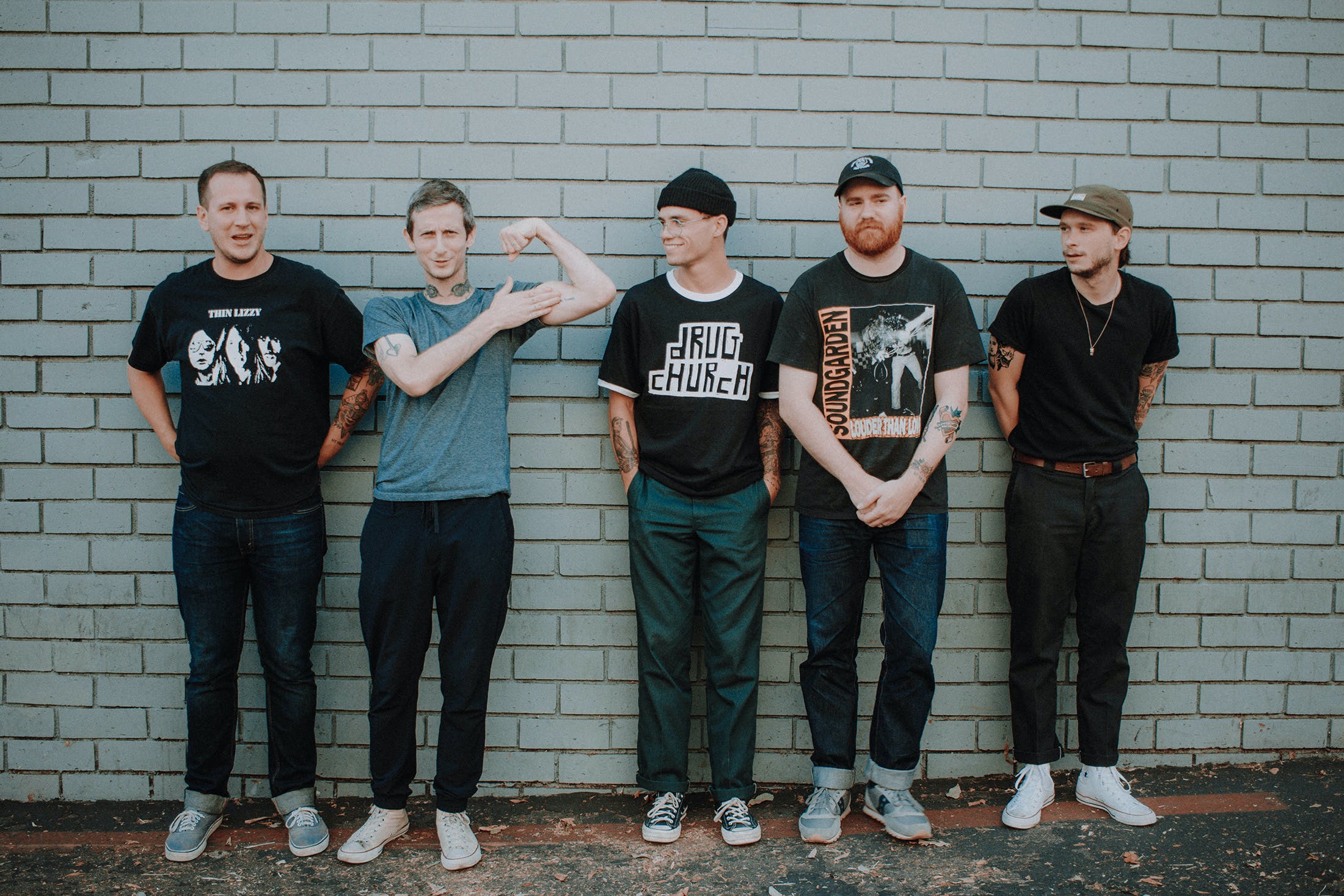 Below is a reprint of a feature from K!1745. Read our full review of Cheer in next week’s issue.

Albany is located on the west bank of the sprawling Hudson River, some 150 miles from New York City. The New York state capital didn’t trouble the higher reaches of the U.S. News & World Report’s most desirable places to live in the country earlier this year, ranking at 39, while Austin, Texas was placed first for the second year running. The city lacks any major sports teams or anything resembling a thriving arts scene, but as the base for state legislature, it offers a wealth of opportunities for those who wish to embark on a thrilling career in the civil service.

One such resident, Patrick Kindlon, realised early on that he didn’t want to spend his days trapped in the air-conditioned nightmare of a hometown office job. He even went as far as having a mission statement of sorts indelibly inked into his chest, ‘Reject the factory, reject the cubicle.’

But that’s not to say he’s work-shy. Far from it. Since 2003, Patrick has led the highly prolific Self Defense Family, who released their sixth album, Have You Considered Punk Music, in the summer. He’s built a career as an acclaimed comic book writer; the fourth in the series of Survival Fetish was released earlier this month. He also fronts Drug Church, a band who once described their music as something “you can push-pit and stage-dive to so you can forget for a moment you have eczema and work at Pizza Hut.”

Next month, Drug Church – who are completed by drummer Chris Villeneuve, bassist Pat Wynne, and guitarists Nick Cogan and Cory Galusha – will release their third album, Cheer. You don’t have to work at a chain pizza store to appreciate it, no matter how modest Patrick is. That much will become abundantly clear soon.

Drug Church didn’t have a singer, or indeed a name, when they started out. They contacted Patrick – busy as ever with Self Defense Family – with a view to joining them and adding his gruff bellow to the music they were writing. Their pitch consisted of a vague career plan of releasing a demo and maybe playing a couple of shows a year. Patrick was in.

“In the way things do, it took on a life of its own,” he says of the band’s cult status. “We’re literally the most clueless collection of people you could ever encounter. I know the most about the ‘music business’ and I still don’t know shit. It’s really one mistake after another, but it just so happens that our music is pretty good.”

Cheer is more than “pretty good”. Like their 2015 album Hit Your Head, it’s something of a contradiction; aggressive punk rock riddled with earworms, yet it sounds bigger, and – gulp – more professional, even. So what would the old hardcore purists say about the fact that you spent more than half-an-hour in the studio?

“I used to be one!” he replies. “The thing about hardcore is that once they see you as not being hardcore, you’re never getting invited back. So I think Drug Church is probably not a hardcore band and I’m okay with that. This is advice for people in bands who think they’ve got to chase credibility: that shit is bullshit. I see a lot of bands breaking their necks trying to get accepted by people who are going to die broke and unhappy. If that’s where you find yourself, that’s cool – that’s your lane. After the age of 23,
I never really concerned myself with that.”

On the 10-track release, Patrick’s lyrics delve into the darkest recesses of the often mundane aspects of modern life. Its opening track, Grubby, looks at those who struggle with the demands of adulthood (‘It’s hard to form adult connections when you sleep on turtle bedspreads’) while he rails against unsolicited advice on Unlicensed Hall Monitor (‘There’s a guy with a search history darker than a sea trench telling you how to live’).

How much of the album is autobiographical?

“The big question I ask myself before we go in the studio now is, ‘Do I want to make this album about myself or other people?’” says Patrick. “A number of songs are directly related to personal experiences, instead of things I’ve seen and speculated upon.”

Take Avoidarama. You may have seen the video where the protagonist – played by Nick, as Patrick refused to be in it – plays dead to avoid awkward social interactions, floating face-down in a pool or lying on a food court table.

“Many fans of music want to feel as though they’re listening to someone who’s had similar experiences,” says Patrick. “That sometimes means mental health concerns and I always like to put it out there that, ‘Hey, that ain’t me. I’m doing pretty okay.’ But as I get older, I feel more social anxiety. These days there are situations where I feel ill at ease in my body.”

On the surface, social media may facilitate a sense of connection to others, but Twitter, Instagram and Facebook in particular may have a role in stoking people’s rising feelings of anxiety.

“When I first moved to New York, I had no sort of income,” says Patrick. “I had just left my job, I was really struggling and I was pissing my girlfriend off, so I walked dogs for a while and that was actually a really fun job. I was interacting with people in Manhattan all day. In some respects, going from real life to a computer gives me the kind of stress that maybe going from a computer to real life gives other people.”

That said, the Self Defense Family Twitter account (@selfdfens) is worth following. Sample tweet: ‘I see a lotta people talking about if they’d fuck Robocop or not. I would. I thought about it, and I would.’

“It’s a messy disaster of years saying anything that came into my head,” he explains. “Maybe I’ll delete those tweets some day, but I’ll never delete them because I feel pressure to do so.”

Patrick has something of an unusual relationship with the hardcore scene. Five years ago he penned a column titled Your Inferiority Complex Is Showing for a U.S. magazine.

“Hardcore sucks worse than it did 10 years ago, which seemed impossible to me at the time,” he explains. “Hardcore was such a big part of my life for years and I still have a hard time explaining why it appealed in the first place. It doesn’t take many steps before hardcore becomes very stuck and prescribed and not terribly creative. Like a lot of people, I’d like to see myself as a creative person, but there’s something that innately appeals about hardcore music. I can look at it and say to myself, ‘Man, there are hundreds of bands doing absolutely nothing of value,’ but I am utterly thrilled by the one that does.”

To that end, Patrick has something of a reputation as a contrarian and has built a body of work that is often informed by the compulsion to go against the grain and avoid the stagnation that has riddled the scene.

“It’s difficult to talk about this stuff because you never want to seem like you’re coming off as superior just because you do things differently,” he says. “Whenever there’s an opportunity to do things the regular way, I go the other way. I’m not trying to self-aggrandise, but it’s like a reflex.”

“When Self Defense write pretty songs, I want to step all over them with curse words and ugly sentiment and bad feelings and difficult topics,” he says. “I default to ‘different’ and I don’t know why. Maybe my mom didn’t hold me enough as a kid. I couldn’t begin to explain.”

A few years back, Patrick was asked what advice he’d give musicians: “Follow your muse off a cliff, but understand that no other human – except maybe your mom – truly gives a shit.” Tough love, indeed. So what keeps him motivated, then?

“You know, they say it takes 20 days to build a habit, whether that’s doing push-ups or heroin,” he offers. “I don’t know if there’s any science behind that – I’m sure that’s bullshit – but the point makes sense. If you repeat something often enough, your brain imprints on that idea and it takes effort to shake it. But that’s how it feels some times. Even when things have been really hard, it never ever occurred to me to not make music.”

Maybe the sterile punch-in, punch-out environment of Albany shaped that worldview. But is he a cynic or simply a realist? We’ll go for the latter. All we do know for sure is that Patrick’s unflinching honesty makes him one of the most compelling voices in American music right now. And it’s time more people paid attention.

Drug Church's new album Cheer is out now on Pure Noise Records. Check it out on the stream below.