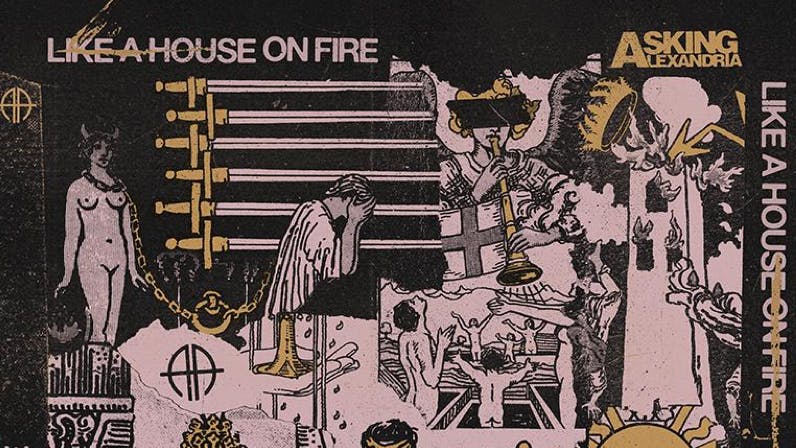 They’re master baiters, Asking Alexandria. In the current climate you’d be hard-pressed to come up with a more provocative, divisive title than recent single Antisocialist. As it turns out the song itself is apolitical, dwelling more on the ‘antisocial’ than the ‘socialist’ as Danny Worsnop dreams of solitude and implores, ‘Please stay away from me / ‘Cause I don’t fucking like you.’ There are a lot of people who feel the same way about Asking Alexandria of course, but here’s the thing. They don’t really care what you think about them.

A thick skin can be an asset for a band. If every musician went around caring too deeply about what people thought, including their own fanbase, we wouldn’t have Metallica’s Black Album or Bring Me The Horizon’s amo. And Asking Alexandria? Their progression would probably have stalled around about the time of Reckless & Relentless.

Instead they’ve developed into a band that isn’t unrecognisable from those first couple of outings, but is certainly a very different beast. We might as well get this out of the way right now; Like A House On Fire is not a metal album. Nor was 2017’s self-titled effort, which saw Danny return to the fold and the aggression of the Denis Stoff-fronted The Black largely channelled away. Asking Alexandria the album did have the odd genuinely heavy moment like the metalcore throwback passages of Eve, but Like A House On Fire has no regression and absolutely no screams. However, if you like the side of the band that’s all about bombastic, roof-raising anthems, then you're spoiled for choice.

House On Fire kicks things off in typically self-assured fashion, packed with stomping riffs and big stadium rock hooks. You might expect They Don’t Want What We Want (And They Don’t Care) to be a middle finger to the band’s haters, but this one is political; railing against the powers that be via huge hooks, crackling energy and a bridge that is pure pop-rock perfection. It’s on the next track Down To Hell that they set out their stall. ‘I don't care what you think about where I choose to draw my line / Sociopath, self-absorbed, egotistical asshole,’ Danny spits in a song that also makes the most dynamic use of the old ‘Na na na’ refrain ever committed to tape. ‘You can want what I'm not or what I was / I can't hear you through the new sound,’ he continues.

One of the album’s standout cuts is also one of its most restrained. I Don’t Need You is part smoky R&B, part classic rock power ballad and all emotion, featuring a wonderful guest vocal from British singer/songwriter and social media star Grace Grundy. Elsewhere, All Due Respect mixes a laid-back vibe with caustic lyrics while Take Some Time is pure unremitting – and unapologetic – sleaze.

Like A House On Fire is an album that ebbs, flows and branches into numerous shapes and directions. It’s also yet another Asking Alexandria album that will divide opinion. And, once again, the band themselves are unlikely to care.

A House On Fire is out May 15 via Sumerian. Pre-order and pre-save it now.