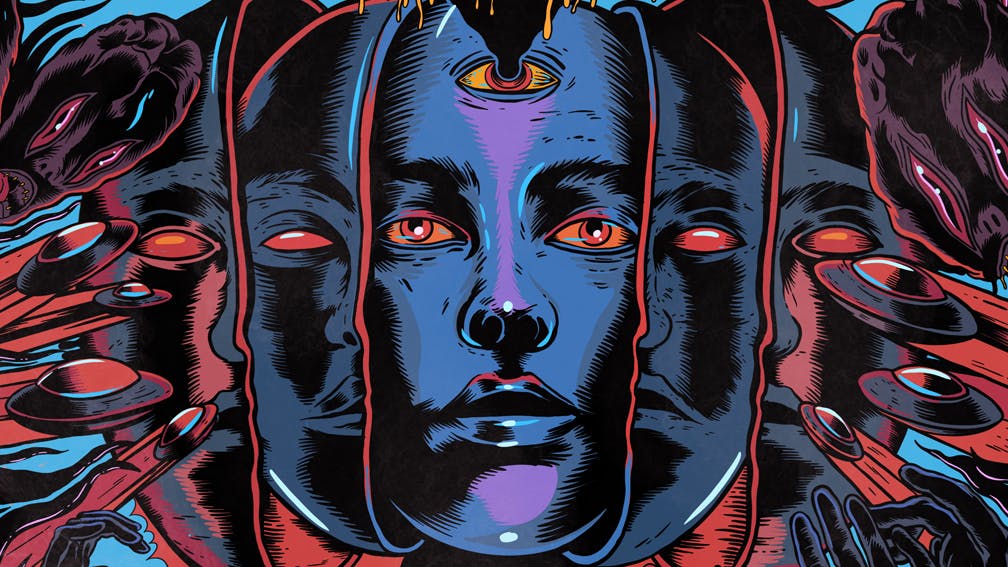 Praise Armageddonism opens and closes with readings from The Book Of Revelation, but the songs in between aren’t really about the end of the world. Instead, Blood Command’s fourth album deals with the kind of emotions and personal situations which just feel like the end of the world. Appropriately enough, its long gestation has involved no shortage of such tribulations.

Originally recorded before the pandemic struck, Praise Armageddonism was shelved when vocalist Karina Ljone handed in her notice. It took over a year before her replacement, Nikki Brumen (ex-Pagan) was announced. The minor detail of her residing in Melbourne, a mere 10,000 miles away from Blood Command’s native Bergen, at a time when no planes were flying, presented further snags.

The irrepressible nature of this album, now re-recorded with Nikki on the mic, can’t help but feel like an explosive response to these enforced delays. The band’s signature mix of pop proclivities, dance-punk energy and post-hardcore riffing wastes no time in reasserting itself, with Saturday City and The End Is Her getting things moving immediately. If these tunes represent Blood Command’s more accessible side, things get noisier with the mathy blast of Everything You Love Will Burn and blazing single Nuns, Guns & Cowboys.

Flashes of kindred spirits appear: A Questionable Taste In Friends shares a certain stomp with prime Marmozets, while Nikki’s rasp on A Villain’s Monologue bristles with the same Melbourne attitude as Amy Taylor. However, Praise Armageddonism really could only have been made by this singular outfit. The bookended Biblical quotes may be a red herring, but Blood Command’s creative rebirth is certainly something of a revelation.

For fans of: Marmozets, Brutus, Paramore

Praise Armageddonism is out now via Hassle