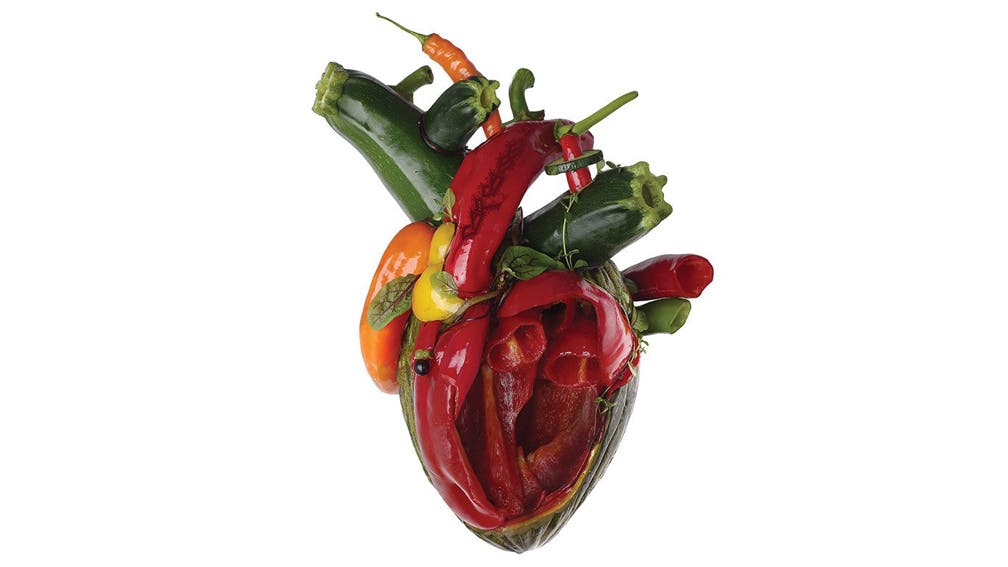 Anyone concerned that the veggie-centric artwork for Carcass’ seventh album might be a reflection of some sort of bloodlessness within should rest easy. Across its 10 tracks, Torn Arteries finds the Liverpool legends on ravenously brutalist form, delighting in the sheer relentlessness of their sonic rip and tear, cutting deep with the ruthless efficiency of an abattoir killing floor. Hell, there’s a song on here knowingly titled Flesh Ripping Sonic Torment Limited, and it packs every one of its mammoth nine minutes and 42 seconds with gnashing menace and unhinged bludgeon.

Arriving almost exactly eight years after 2013’s mighty comeback album Surgical Steel, it’s easy to wonder whether there might be some lack of urgency or inspiration. From the moment the ferocious title-track rolls off Daniel Wilding’s thunderous drums (incredible throughout) and into an eviscerating Bill Steer riff, though, the opposite appears to be true, with a torrent of ideas and pent-up malice spilling forth like pus from an aged wound. The deranged grindcore of their early career remains on ice, but Carcass have the heavyweight melodic savagery they’ve been dealing in since 1993’s Heartwork absolutely nailed.

Dance Of Ixtab (Psychopomp & Circumstance March No. 1 In B) builds its psychotic advance around some bluesy swagger. Eleanor Rigor Mortis packs a world of thrashy high-tempo between its sledgehammer blows. The Devil Rides Out is a straight up death'n'roll banger with (meat) hooks big enough to hang elephants on. Kelly’s Meat Emporium – originally titled “Stock Carcass” – allows bassist/vocalist Jeff Walker off the leash, layering his caustic, blackly humorous lyrics over an off-kilter, almost Eastern-tinged composition.

In truth, Torn Arteries is a less immediate, more unruly listen than Surgical Steel. Veering between basement-torture intensity and stadium-sized sweep, it lacks the pinpoint coherence of that release, while the more-is-more attitude to composition feels less cuttingly efficient. Hand yourself over entirely, though, and you’ll be embraced in the gory maelstrom. By no-holds-barred closer The Scythes Remorseless Swing, it’s hard not to be overwhelmed with sheer awe just seeing these death metal progenitors getting back to murderous business. Killer stuff.

Torn Arteries is out now via Nuclear Blast

Read this: Friends: The one where Phoebe revealed she was a Carcass fan

Friends: The one where Phoebe revealed she was a Carcass fan

Could Friends’ Phoebe Buffay be any more of a metalhead?!