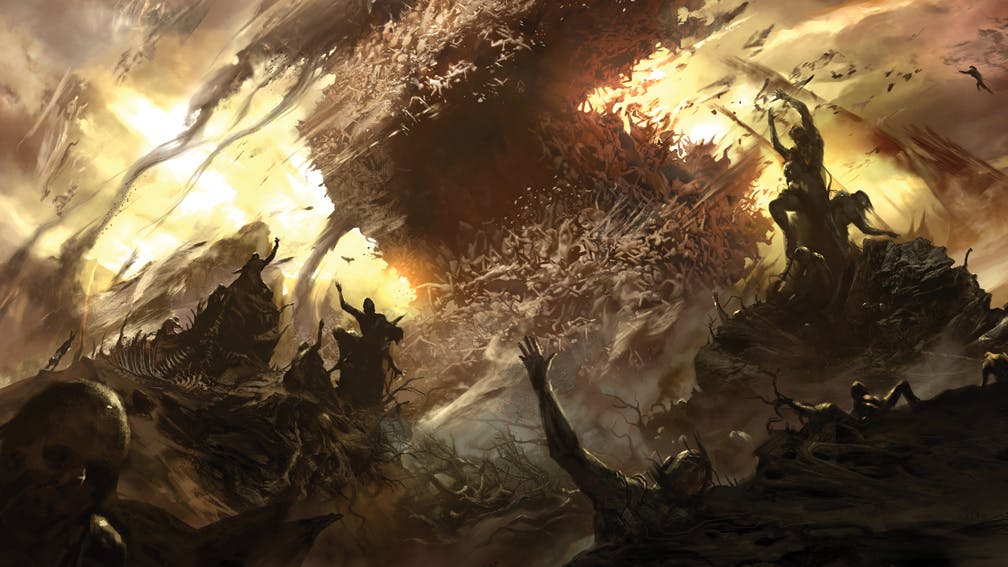 It is hard to imagine tech-death metal being taken to more literal extremes than Eniac, the opening track of Cognitive’s fourth record. Named after the first general-purpose digital computer, Eniac takes you inside the corrupted code of a computer that has gained sentience and turned upon humanity. Is it on the nose? Yes, but it lands with such cartilage-crushing force that to dismiss Cognitive as chuggers in tinfoil hats would be premature.

Apart from a title that sounds like a school poetry assignment, Malevolent Thoughts Of A Hastened Extinction gets its unrelentingly bleak atmosphere from the dialled-in chemistry of these five New Jerseyites. Like surgeons performing keyhole surgery with meat cleavers, they strike a balance between grinding brutality and laser-focussed precision – a product of time spent during the pandemic locking-in their performances. The graft has paid off. The sudden gear shifts of The Maw are executed to whiplash-inducing effect, while album highlight Oroborous slithers from tarry, slow-churning beats into a melodic guitar solo that is a blast of fresh air in this swamp of decay.

Where Malevolent Thoughts… could have done with more energy, though, is in writing memorable songs. It takes until track eight before it feels like the band are pushing themselves, rather than simply hammering home their own blueprint. On Tearing Tendon From Bone, they continually dodge left when you expect them to chug right, while Destitute draws in more proggy, atmospheric influences that would have gone a long way earlier in the album.

Artificial intelligence has reached the stage where programs can generate a non-stop stream of halfway-convincing tech-death metal. Malevolent Thoughts… is better than that, but Cognitive still need to move forward if they want to stay ahead of the machines.

For Fans Of: Meshuggah, Death, Origin

Malevolent Thoughts Of A Hastened Extinction is released July 16 via Unique Leader.

The Underground Sounds of America: Cognitive

The brutal death metal crew is finally taking their vicious sonic assault out of New Jersey and into the world.

New Jersey may get a bad rap, but the state is responsible for some of the best heavy music to ever come out of the United States.