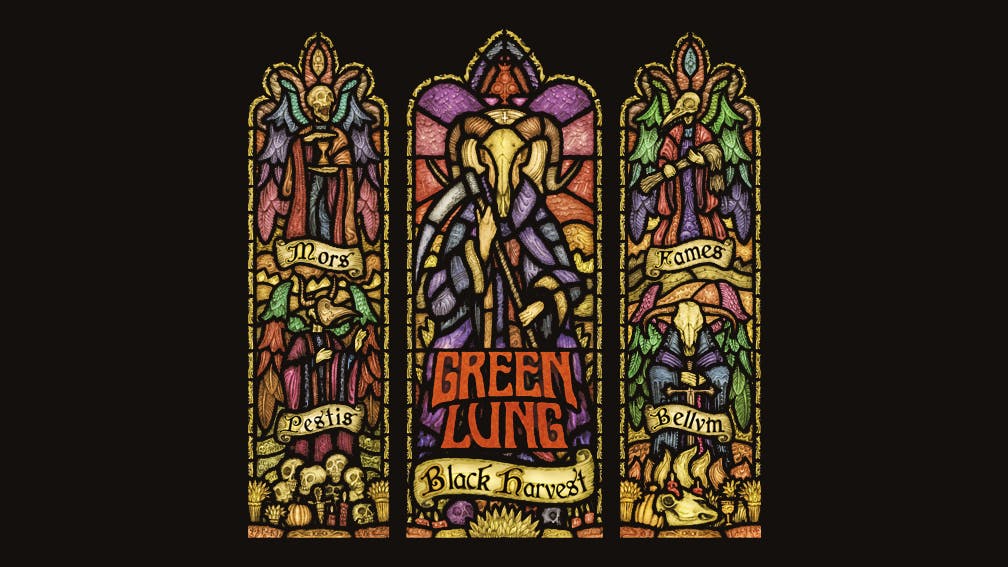 In many ways, Green Lung seem like a band out of time. They look like 1970s Black Sabbath poking around Summerisle; they sound like they really want you to know how much they like Deep Purple. The language they use, their folk-tale overtones, the shadow of a rural noir that sits on the edges of what they do – all comfortably retro, rock’n’roll described by Dennis Wheatley.

But what all this misses is an urgency, a relevance, and a longing for something that’s not just timeless, but of its time. In times of strife – with or without shit in the rivers to go with a toxic climate – it’s natural to look back to an older, apparently simpler time, and even more natural to long for it. On Black Harvest, those searching for a black of warm, ’70s rock will have found a grand haul, but truly, it’s in their strong spirit of celebration, life and desire that Green Lung possess you with a thoroughly here-and-now energy and excitement.

It opens with a solitary vocal – recorded in a church that had been not-exactly-legally accessed by the band – but from there it’s a psych-rock party. Frequently, the heavy riffs twist around liquid keyboards, freaking out infectiously before settling into a groove. There’s Queen-esque explosions of total flamboyance. They’ve got choruses that Ghost wish they’d written. And though this does feel a little familiar to anyone who’s ever picked up a record from the ’70s or glanced at the doom scene, the glossy sheen and theatrical projection of the banging Reaper’s Scythe or the warning against ‘Playing with forces you can’t understand’ of Upon The Altar have a fresh, blossoming personality all of their own.

As with their Woodland Rites debut, Green Lung have once again proven here that they are not only good at this stuff, but have understanding enough to actually add to it. And whether you care to look deeper into the lyrics or simply revel in the imagery, this is a brilliant, joyous record from which there are bountiful rewards to be reaped. A band out of time? Only if you're not looking for a good time.

Black Harvest is out now via Svart Records