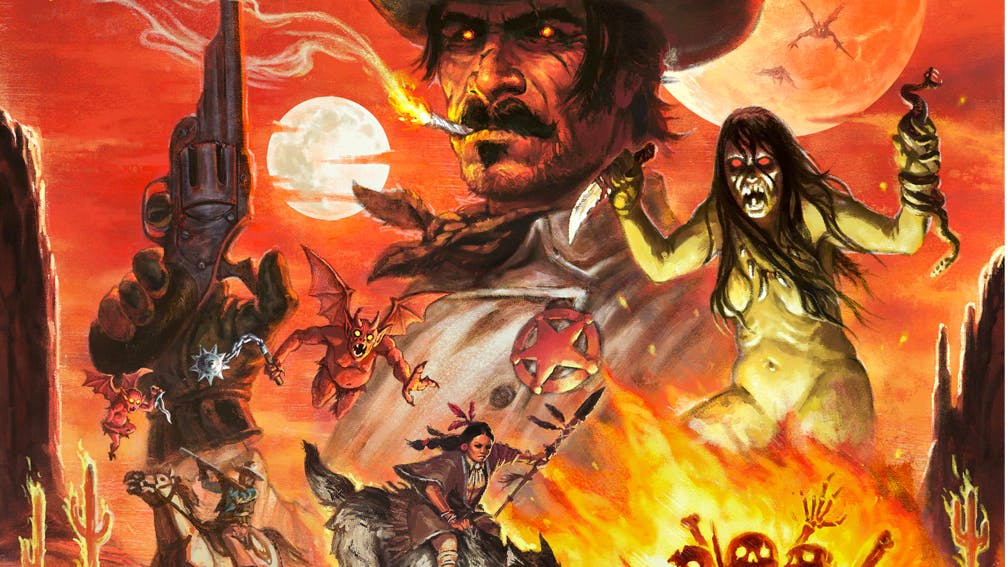 It's definitely a surprise at first that with all their cowboy-tastic imagery, SpiritWorld actually sound like a brutal metalcore knuckle sandwich. Then you scratch the surface and discover that the whole enterprise is part of a much bigger creative endeavour from the mind of bandleader Stu Folsom. Deathwestern brings to musical life his macabre, horror twist on the American West, as written about extensively in his fiction works (some of which were edited by late Power Trip singer Riley Gale). With a vibe that's as much Stephen King as it is Gunsmoke, it's a concept that transfers nicely from the printed page to the blown speaker, even if Stu could have put in a few more harmonicas.

Even without knowing all this, though, Deathwestern is a feast of the best bits of Slayer – 'weeeeeeeeeeeew!' guitar dive-bombs and all – and Hatebreed's sweaty bullishness. Purafied In Violence, Relic Of Damnation and the battering title-track all chug with a satisfying chunkiness, while Moonlit Torture is a riot of hardcore vandalism.

Given its massive concept, a few more obvious nods wouldn't go amiss. It's a pity something Stu has spent such a lot of time on in his literary work can go amiss if you didn't know about it, and you're left with a good, but not entirely groundbreaking set of punishing songs. On those terms, though, Deathwestern is still banging in all the right ways.

For fans of: Hatebreed, Slayer, Lamb Of God

Deathwestern is out now via Century Media

Watch: SpiritWorld share Relic Of Damnation, the conclusion to their DeathWestern trilogy

SpiritWorld have unleashed new single Relic Of Damnation, along with a cinematic video that brings their DeathWestern trilogy to an end…

Watch SpiritWorld's new video for The Bringer Of Light, taken from their upcoming album Pagan Rhythms.