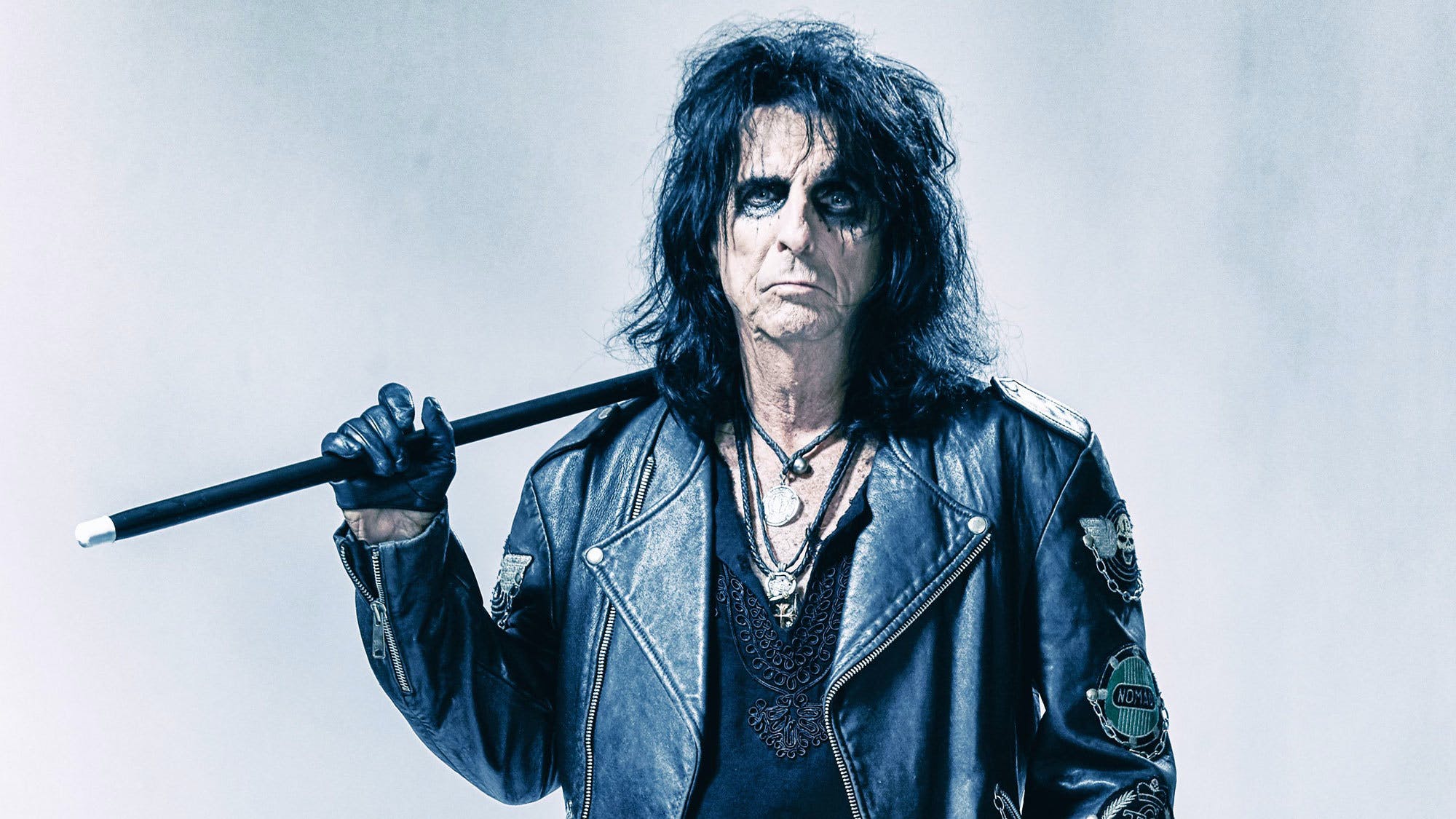 They walk among us, and they’re very, very real.

Alice Cooper is as surprised as anyone else that the Hollywood Vampires – the group he put together with Johnny Depp and Aerosmith guitarist Joe Perry to play fun covers in small bars – has become a fully-fledged band.

Originally planned as a way to pay tribute to their “dead, drunk friends”, the trio’s second album, Rise, has 13 original songs alongside only three covers, and follows a triumphant show at London’s SSE Arena, Wembley in 2018. Now, they’ve announced four massive UK dates in 2020.

Alice likes to joke that the Vampires are the “world’s most expensive bar band”, but he wouldn’t be doing it if it were a novelty. And, as he explains their accidental origins and his surprise at Johnny Depp’s guitar skills, he also reveals why, after more than 50 years in the game, he’s more in love with performing than ever before...

You’ve just announced 2020 UK dates with Hollywood Vampires – how excited are you to be returning to the UK, Alice?
“We’re thrilled. The thing that’s great about the Vampires is that it started out being a bar band. All we were going to do was go to bars and play songs in tribute to all the guys we used to drink with who’ve died. The very first night we played, it was at The Roxy for about 100 people. Geezer Butler sat in with us, and all the classic guys. But then a week later we’re at Rock In Rio with 200,000 people. All of a sudden the Hollywood Vampires became an arena band. That happened pretty quick! The cool thing is that everybody in the band are best friends, and the best players around. When you get a band like that together, you usually have this gigantic tidal wave of ego, as you’ve got all these alpha males. But we’ve never had an argument, or had anybody stomp offstage in anger. It’s pretty amazing to find people who cooperate.”

READ THIS: A deep dive into Alice Cooper's Poison video

How do you explain the musical chemistry you’ve discovered as a band?
“We’re all hard rockers. We all come from the same school; the Yardbirds and The Who and The Kinks, and everyone is blues rock. We all come from The Rolling Stones. When we do our kind of music, it centres on the guitars, bass and drums. There’s not a lot of ‘pretty’ within our music at all. Everything about it is in-your-face rock’n’roll.”

What has changed since you first started playing together?
“Well, when we started playing, the first album was mostly covers – there were, like, three original songs on there. And that was what it was supposed to be. Everybody was invited to play – Paul McCartney came in to play, Dave Grohl plays – and they came in and did a little something in honour of the fallen brethren. And then the second album, Rise, was originals with only three covers. So, we turned into a real band, I think, on the second album. I would imagine [on this upcoming tour] we’ll be playing a lot more of the original material from Rise. But, you know, I love doing the covers. I love doing things like I Got A Line On You [by Spirit] and The Doors stuff. That’s always fun to do.”

How did you, Johnny and Joe first get together?
“In the very beginning, I was doing [the Tim Burton film] Dark Shadows with Johnny Depp in London. We started talking about the good ol’ days, about the original Hollywood Vampires: Harry Nilsson and Keith Moon, Ringo Starr, and John Lennon when he was in town. All those guys, we would sit and drink every night, at the Rainbow, and they started calling us the Hollywood Vampires. The thought came up, ‘Why don’t we put a band together and pay tribute to those guys?’ Jim Morrison and Jimi Hendrix and all the guys we’d drink with who aren’t here anymore. We just happened to go play the 100 Club on Oxford Street that night. I invited Johnny to come in and play, as I knew he was a guitar player. But I didn’t know how good he was. He came in and nailed it. Johnny and I said that it’d be fun to put a little bar band together. Joe Perry said, ‘I’m in.’ Duff McKagan said, ‘I’m in.’ All of a sudden we had this all-star band. Bob Ezrin said, ‘I’ll produce it.’ And it was all up and running, without a rehearsal!”

READ THIS: Alice Cooper isn't the villain the world wanted him to be

Johnny is, of course, better known as an actor. What do you think makes him unique as a guitarist?
“Johnny started out as a guitarist. He was in a band in Kentucky that he’d started with his friends. He ended up in Florida, then came to LA and accidentally became an actor. He wasn’t really looking to be an actor. And so what surprised us was how good a guitarist he was. He got up there and he could play on anything. He just did some shows with Jeff Beck. If you’re a guitar player and you’re playing with Jeff Beck, there must be something good going on there. Johnny gets up and does solos with Joe Perry – who is considered one of the great guitar players in rock – and just kills it.”

On Rise, you cover Heroes by David Bowie. It’s not necessarily a hard rock song, but what makes it special for you?
“Johnny brought it in. He said, ‘I’d really like to do this song, Heroes.’ He was playing along, and I said, ‘Why don’t you sing this one?’ He said, ‘I don’t sing.’ And I said, ‘Johnny – you did Sweeney Todd.’ ‘Oh yeah,’ he said, ‘I did, didn’t I?’ I told him, ‘This is the kind of song your voice is really good at.’ We actually recorded it in the studio that Bowie did, in Berlin. We happened to be doing a show in Berlin, and took a day off and went into that studio and did the whole thing right there. It gives it a little more authenticity.”

Did you record anything else while you were in Berlin?
“We recorded I Want My Now, which is one of our original songs. But they have a thing there that’s really unique – they have a thing where you to go directly to wax. It’s one of these older studios, so you can actually do a song, live, and it goes right on to vinyl. As you’re doing it, it’s cutting it. So there’s one version of Heroes that’s on vinyl. We flipped a coin for it, and Johnny won the vinyl.”

You recently completed a seven-date North American tour. What’s the best reaction that the Hollywood Vampires have received so far?
“When did Wembley it got voted ‘best show of the year’ there. We were surprised at that – that’s quite an honour. Wembley gets a lot of shows, and for fans to vote us as the best show of the year... I look at that little piece of plastic they give you and think, ‘That’s pretty cool.’ It’s not something that we brag about, but we certainly look at it and go, ‘Wow!’”

At that very show, Hollywood Vampires played Ace Of Spades as a tribute to Lemmy and Motörhead. What would your own personal tribute to Lemmy be?
“If he were alive, Lemmy would certainly be a Vampire. He’d probably be our bass player! All of us knew Lemmy, on different levels, because he played with us so many times – everyone in the band had done tours with Lemmy. He was sort of a journeyman. I quit drinking 37 years ago, but he came to me once and said, ‘Alice. I quit drinking.’ And he had a drink in his hand! I was sitting there going, ‘That’s great – and that must be Coca-Cola?’ He said, ‘No, there’s a little whiskey in there.’ His idea of not drinking was not drinking a bottle of whiskey each night. Maybe just five or six drinks.”

READ THIS: The wit and wisdom of Lemmy

Hollywood Vampires pay tribute to a lot of people who died from excess – what’s your advice for young musicians today?
“I mean, I stopped drinking 37 years ago, because I got up one morning and threw up blood. I knew that it’s not smart to join the 27 Club, but my doctor said, ‘If you really want to join them, just keep doing what you’re doing.’ I got the point. If you look at guys like Steven Tyler and Iggy and myself – all the guys that are still here touring – it’s all because we got a hold of our addictions and decided we’d rather make 20 more albums than be in a cold grave somewhere.”

You’ve been performing live for such a long time. What’s the most satisfying part about still being onstage today?
“I still look forward, every night, to going up on that stage. I think I was born to do this. And creating a character like Alice Cooper, which isn’t like you at all – he’s like an arrogant villain. He’s sort of like Alan Rickman. A kind of condescending villain, and that’s really fun to play, every single night. I’ve got a band that’s probably the best touring band out there, and it’s impossible to get bored with our show.”

Catch Hollywood Vampires on tour at one of the dates below. Get your tickets here.