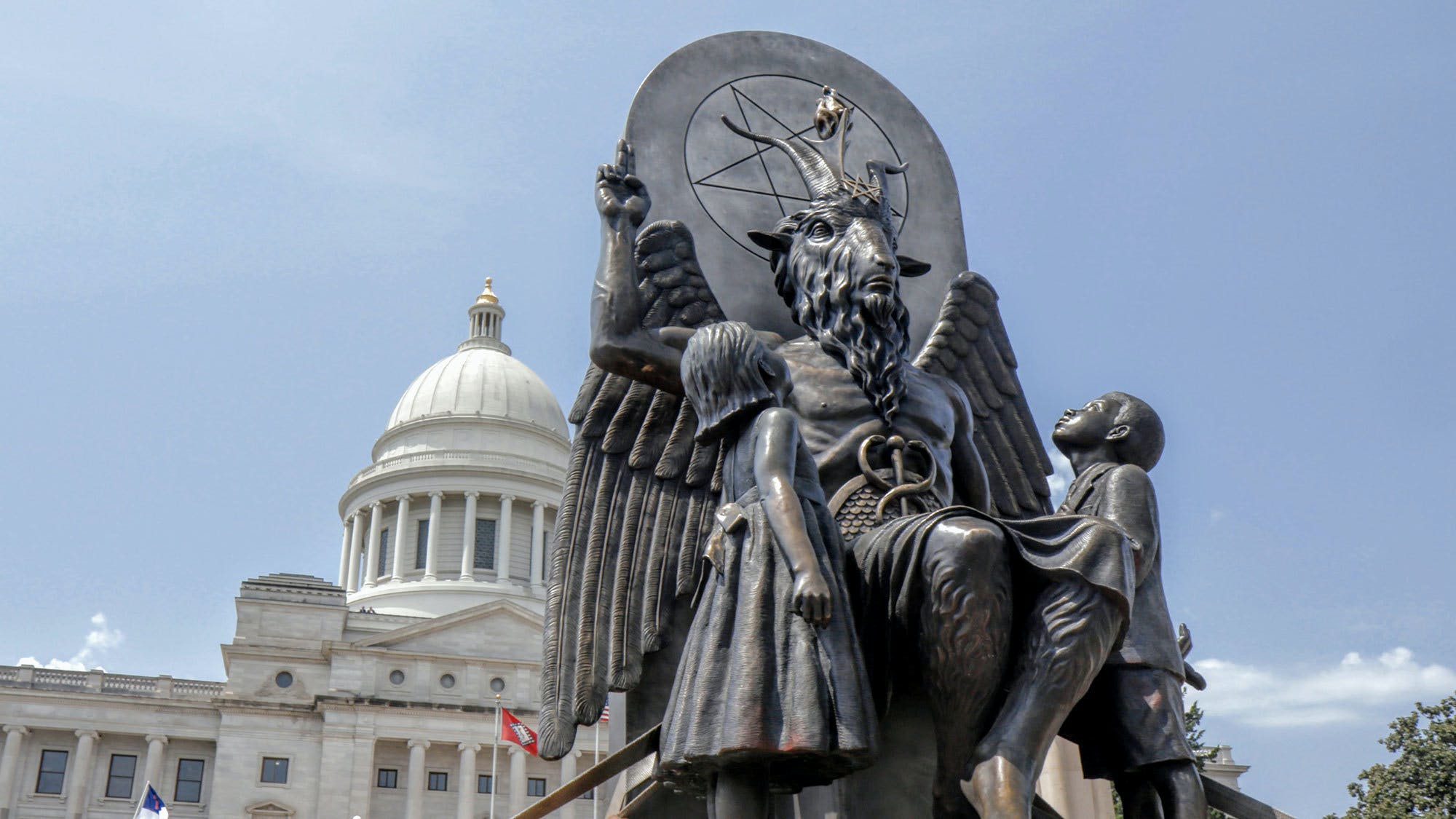 With the holidays coming up, metal fans the world over are preparing to have their T-shirts stared at with grimaces of distaste. But getting a mean look from Nana is one thing -- being thrown off of a flight you paid good money for is another. That was the situation one woman was put in, when staff on an American Airlines flight refused to take off until she either changed her shirt reading 'Hail Satan' or got off the plane.

According to Buzzfeed News, Swati Runi Goyal was boarding an American Airlines flight from Florida to Nevada on October 30 when a staff member asked her to gather her things and follow him to the front of the plane. Swati assumed she'd be getting upgraded to First Class -- but instead she got cornered by staff, who demanded she change her shirt or get off the plane.

Above: Swati's shirt, via Buzzfeed.

"He said, ‘Our crew has found your shirt to be offensive,’" said Swati. "We initially just thought it was a joke. But he repeated the directive, and there was another female crew member who was behind him with her arms crossed looking very angry."

READ THIS: How Satan is trolling middle America

Swati isn't a satanist -- she's a member of the Satanic Temple, a non-religious organization that uses the symbolism of Satan to point out the hypocrisy of Christianity. In this situation, it appears that tactic worked.

Swati made the argument that she'd worn this shirt many times, including on airplanes, but the staff refused to listen. They delayed take-off and even brought a customer service representative on board to tell her she could not wear the shirt.

Finally, when her husband offered her one of her layers to wear over it, the crew agreed to continue the flight as planned -- but refused to make eye contact with Swati or offer her drink service throughout the flight.

When Swati initially contacted American Airlines, they responded that they "have policies in place to ensure that no passengers are subjected to objectionable situations while on board," and later told Buzzfeed, ""Our flight attendants have a responsibility to all passengers in our care, and we must sometimes make difficult decisions associated with the application of our policies."

READ THIS: 12 of the most uplifting songs about Satan

This changed instantly, however, when she publicly tweeted her story. "Discrimination has no place at American Airlines," the company tweeted back, with a spokesperson telling Buzzfeed, "We apologize to Ms. Goyal for her experience, and we are reaching out to her to understand what occurred."

Apparently, American Airlines have since offered Swati a full refund, and have assured her an investigation is ongoing.

To be fair, Swati's recounting to Buzzfeed is at times problematic -- she makes a point of saying, "I’m just an ordinary-looking person. I’m not goth. I don’t have piercings. I wasn’t wearing a shirt that had a goat being beheaded on it." But the truth is, she shouldn't have been discriminated against even if she had the word 'Satan' tattooed on her forehead. Discriminating against someone based on appearance is wrong, every time.

This is not American Airlines' first religious discrimination scandal when it comes to clothing. On two separate occasions, Muslim passengers have had their flights canceled or were thrown off a plane due to other passengers being uncomfortable with having them on board.

The issue is that American Airlines' policies are vague enough to allow this sort of religious persecution. Their website says that passengers must "dress appropriately; bare feet or offensive clothing aren’t allowed." However, who that clothing is offensive to, or how easily offended those people are, isn't clarified.

It's also noteworthy that American Christians are perpetually arguing that they're being discriminated against, for, say, having to make a gat couple's wedding cake or not having a Christmas tree on their Starbucks cup. Wear a 'Hail Satan' shirt, however, and suddenly religious freedom isn't a topic that interests them.

Metalheads: be careful this holiday season, but don't budge.

READ THIS: 10 of the most believably satanic bands