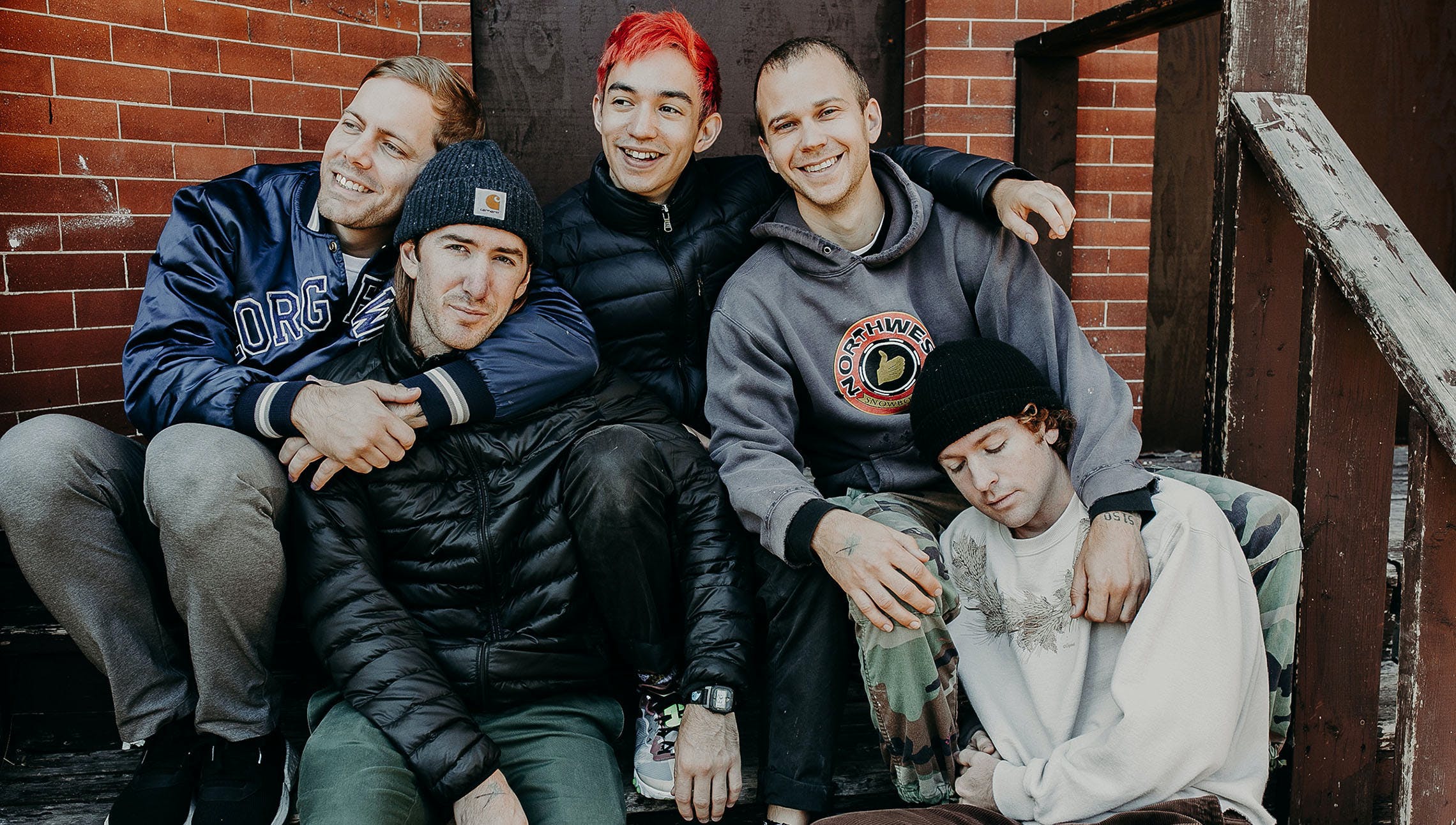 Saxophone solos, bongo fills, slide guitar licks, and sugary melodies plastered over acoustic strums. Those aren’t elements that come to mind when you think of hardcore punk, which is what Angel Du$t were playing just six years ago. But on each project since their 2013 debut, Xtra Raw, the Baltimore band have strayed exponentially further from their rough-and-tough roots.

The group is fronted by Justice Tripp, the vocalist of legendary hardcore bruisers Trapped Under Ice, and rounded out by members of stage-dive saviors Turnstile and noisy Olympia punks, GAG. But on their third full-length, Pretty Buff, Angel Du$t made magnificently weird pop music and delivered it with the energy of uplifting hardcore.

“It’s no secret that our creative circle between Trapped Under Ice, Turnstile, and Angel Du$t, loves pop music,” Justice tells us. “We came up on pop music and [here] there’s less restraint to just explore what we want to pop-wise. And I know that’s something that always rubs people wrong in the hardcore and punk community, and I’m okay with that. I like that.”

Pretty Buff is a record steeped in melodic appeals that will surely capture listeners who aren’t initiated with their pit-starting pasts. However, to fully appreciate it, one has to understand where Angel Du$t came from. We asked the frontman about each Angel Du$t project to date to create a sonic timeline of his band’s unique creative trajectory…

As its title implies, Angel Du$t’s first release, Xtra Raw, is a scrappy, lo-fi bundle of punk songs that’s over and done in 10 minutes. By the time it was released, Trapped Under Ice had recently announced their hiatus (which would extend into 2015) and Turnstile had just dropped their second EP, Step 2 Rhythm. Two years later, Turnstile would eclipse TUI as the most popular band in contemporary hardcore. But in this strange in-between period, the would-be members of Angel Du$t were casually messing around with songwriting styles they liked but couldn’t find a place for in their other bands.

“I don’t think we had any expectations of being a real band,” Justice says. “Maybe just to make something that sounded different and show it to our friends and hopefully they thought it would be cool.”

They settled on eight tracks, but Justice reveals that there were a surplus of ideas from the Xtra Raw writing sessions that never saw the light of day. It was a formative time in that sense. Proving that the vocalist could redirect his melodic chops from menacing to poppy, and establishing a creative relationship between hardcore guys who wanted to push the boundaries of the genre.

“There wasn’t a lot of emphasis on songwriting or production or anything like that. Just more, like, having fun and seeing what of the fun ideas we were coming up with were cohesive and felt good together. It was a very experimental period, for sure.”

A.D. arrived one year later and it immediately made Xtra Raw sound like a demo. The melodies were sharper, the riffs were more thought-out, the harmonies were more distinct, and the arrangements sounded more “written”. But above all, the production elevated Angel Du$t to the level of the members’ other bands. It was beginning to sound like more than just a side-project.

“We had more of an idea of what the band wanted to be and started, like, focusing on it. The influences that worked for us became more obvious to us. We started talking to Brian McTernan about recording Angel Du$t and we’re all big fans of him and his recordings… That might’ve been the main incentive at the time to record something, to just record something with [McTernan].”

McTernan is a figurehead of Baltimore hardcore, having fronted revered D.C. band Battery in the ’90s before pivoting to producing seminal hardcore records for the likes of Cave In and Snapcase in the 2000s. He also had a lot experience working with pop-punk and emo bands. Therefore, he had the know-how to polish the hook on an A.D. track like Big One without taking away from the snarling character of Set Me Up. That’s a dynamic choice most bands outside of the Angel Du$t family would veer away from, but Justice and co. leaned into it.

“It was a very conscious effort to be doing something very far and removed from Trapped Under Ice.”

From the titles alone (Toxic Boombox, Twist N Shout), it was obvious that Angel Du$t weren’t taking themselves too seriously on Rock The Fuck On Forever. Although they spent the record’s touring cycle gigging with contemporaries like Harms Way, Terror, and Touche Amore, RTFOF was even catchier and more refined than A.D.. They dipped into surf-rock on Deep Love, dabbled in power-pop on Twist N Shout, and drenched the guitars in a thick fuzz that was more akin to grunge than punk.

“A goal for me has always been to, like, disturb the peace,” Justice says. “As far as what people expect and what people think is hardcore, what people think is punk, and how people define certain types of music. And I think with Xtra Raw and A.D., they were a little more off-putting in that way. People didn’t know how to feel about them when they heard those records. And the reaction to those was always, in the beginning, ‘I don’t know how I feel about this.’ And that same person a couple months later tells me that’s their favorite record.”

Despite its ’70s-indebted baby blue cover art and ripping saxophone solo in its closing track, this album didn’t get the confused reaction from hardcore kids that Justice was hoping for.

From its opening note, Pretty Buff sounds like Justice challenging his fanbase with the sweetest, sunniest tunes he can muster. The whole record is loaded with acoustic guitars, non-traditional rock percussion (bongos, namely), and smiley hooks that are decidedly distant from hardcore. It sounds like a punk album that’s trying its hardest to not be a punk album.

“I love the energy of hardcore and punk rock music, and I think there are ways to create that energy that a lot of bands forget about,” Justice says. “The Feelies is a band that I think create energy using a lot of acoustic instruments and percussive instruments, and they influenced a lot of great bands. And you don’t see that influence a lot -- in the world we play to directly, anyways. So for us, it was special to find new ways to create energy without turning the distortion up to 10 and playing as hard as possible.”

The aforementioned intro, No Fair, pulls directly from that lexicon, and so does one of the album’s lead singles, Take Away The Pain. Both feel spiritually punk, but neither feature a drum kit. Some of the wildest songs on the album, though, are the ones that induce manic foot-tapping in the way of a “conventional” punk song, but are actually propped up by acoustic guitar strums that go unnoticed until you realize what you’re two-stepping to. Justice says that Angel Du$t’s songs have always been conceptualized and initially recorded on acoustic guitars, but Pretty Buff was the first record where they refrained from removing those tracks from the final mix. That’s unorthodox in nearly every form of punk rock, and Tripp is thrilled with that.

“Anything great should be off-putting. For the most part, records don’t come out and people say, ‘this is just great,’ and then it stands the test of time. Because if something’s easy to digest like that, it usually is a sign that somebody else is doing something similar and they’re very familiar with the idea. It’s rare that somebody can take a sound and reproduce it in a way that’s so special that it stands the test of time. So that’s always been a goal for me and everybody in Angel Du$t. [To] be like, ‘Hey let’s push buttons a little bit, let’s put out that record that you don’t know how you feel about right away.’”