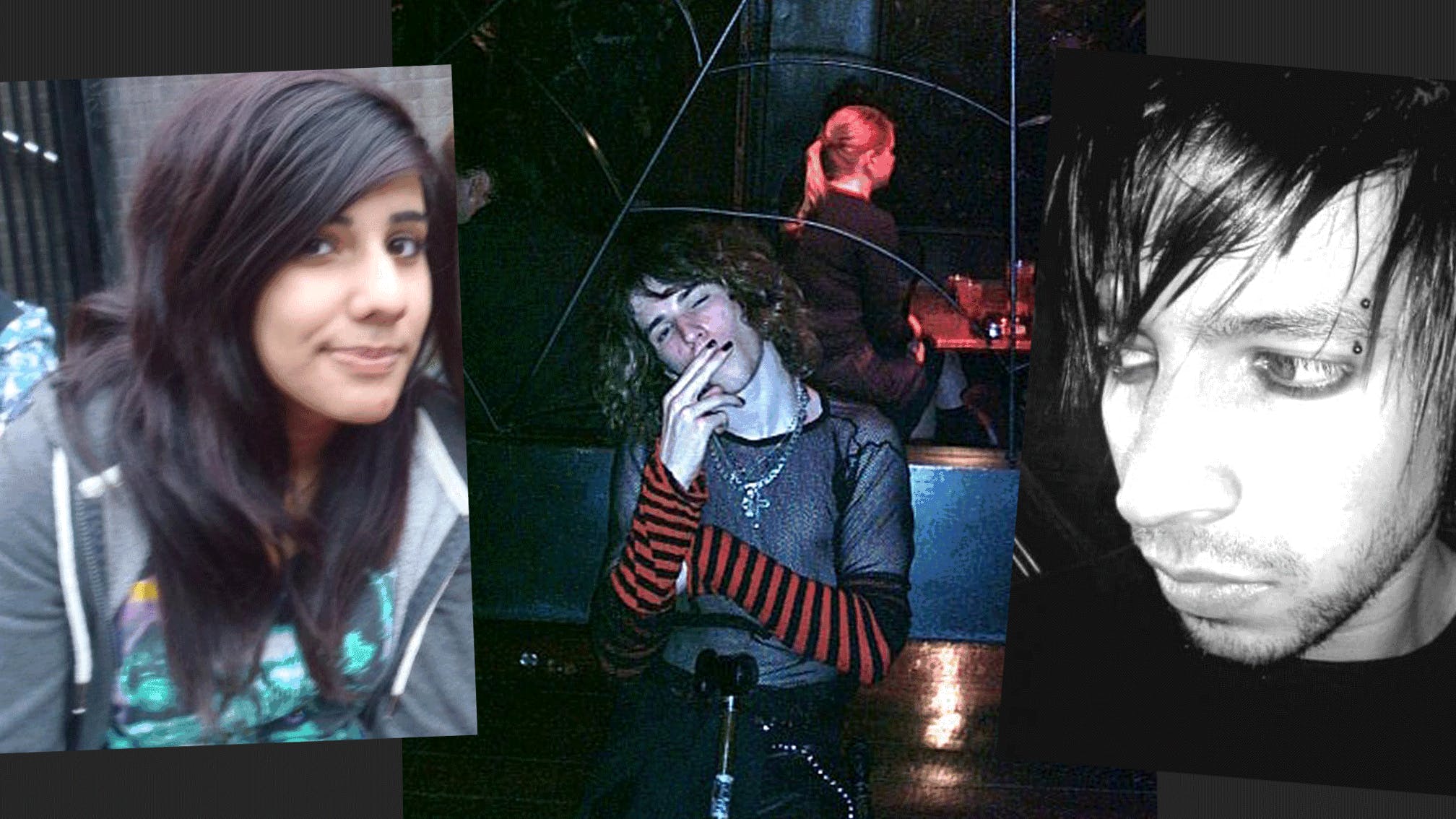 ‘Do you worship the devil ’n that?’ is probably the sort of silly question you’ve been asked at least once growing up. Going through your adolescent years in the alternative subculture sphere is a process like no other. It’s a journey of discovering where you feel understood, as it is also a time of alienation and discrimination.

If you’re reading this right now, then you probably used to spend your morning perfecting the eyeliner and swoopy fringe, and the meticulously-positioned badges on your chequered Vans backpack… all to be treated like you were an otherworldly devil child who needed locking away once you got to school. One thing, then, is for certain: the classrooms of the UK hold more memories of the ups and downs of being an emo kid than any other place.

“I certainly wanted people to think of me as gothy or punky, but I didn’t really know enough about the differences between the styles to stick to one of them,” Lauren shares of her experience. She grew up with parents and an older sister who were appreciative of the heavier side of music, yet felt uncertain as to whether ‘emo’ was a good category to be put under in class. “I only really heard it [the term emo] used as an insult by people who thought we were weird, so naturally I hated having that label put on me. I’m glad it’s got a better context now.”

Some of us would do anything but admit we were “one of them goths”, a childhood icon for many of us, Avril Lavigne, even once said. “It is more punk to tell people you’re not punk than to sit there and say you are a punk.” And maybe she had a point – after all, the enigma of being the mysterious and misunderstood emo kid was something we can admit now we secretly loved, and being honest about it often meant being forever insulted for it then on.

For many of us, our style also provided us with confidence. Dom found a lot of comfort that came with the wild expressionism of rock and alternative culture – and it’s something he took with him in school: “I really responded to bands with a strong look,” he explains. “Placebo, The Cure, Nine Inch Nails, Limp Bizkit and The Smashing Pumpkins. [They] were bands that had such a strong visual vibe… They made me want to be myself.”

“My style was very much influenced by what I was seeing in the pages of Kerrang! and on Tumblr too,” Jasleen – who works as a music publicist today – agrees. “It was somewhere between scene and emo, bright colours, skinny jeans, band T-shirts, accessories from Claire’s and a massive side fringe.”

Of course, there were some practical difficulties: our outfits weren’t something you’d usually find on a hanger in your local Topshop, and it was tricky to maintain the emo aesthetic under stifling school policies. Nik – who now makes emo-influenced music under the name of NEO 10Y – even remembers getting into trouble at school for the way they expressed themselves as an emo kid, having once landed in the headmaster’s office. But why? “I think it was definitely [due to] fear and the fact that a lot of emo culture is gender non-conforming, which they found alarming at an all-boys’ school,” Nik ponders.

Not all of us were lucky enough to have support from family to go home to after 3pm, either. But for those of us that did, their alliance allowed us to flourish into creative adults. “I have Indian ancestry and my direct family [mum, dad and sibling] are very liberal and accept me fully for the artist and being that I am,” Nik tells us. “It has taken some work, and [I had to] hold my ground in certain areas.”

Pictured above: Nik, aka NEO 10Y

And whilst teachers often didn’t understand us, neither did those of the opposite subculture. This clear divide in UK schools is what made our emo youth so unique. Sure, our friends in the U.S. and other parts of the world may have had clashes with jocks and popular kids, but the wildly different views and aesthetics of conflicting cultures on this side of the pond have been talked about for decades.

Both have seen themselves ridiculed on the internet and across TV (think Little Britain, and the stereotypical memes about goths chugging cans of Monster), but realistically, we shared more similarities than we perhaps realised at the time. “I’ll admit I did think anyone in that sort of style was going to be judgmental or mean, but now that I’m older I can understand that those kids were just trying to fit in as well, and not all of them are like that. Being a teenager is hard for everyone,” Lauren considers.

Jasleen agrees. “[We] definitely hated them and they hated us. We’d send each other anonymous hate on websites like Formspring after school. My attitude has for sure changed because I’m not a judgemental angry teenager anymore.”

For all those years when we were clashing on PE fields and fighting each other online, we were going through the same struggles privately. And our community isn’t perfect. We had our own flaws of not being as inclusive as we could have been – and this is something that’s hopefully evolving as rock and metal genres grow with bands featuring more people of colour and artists who are LGBTQIA+. But whether you were attending reunion concerts for N-Dubz or My Chemical Romance this past year, you probably felt like nobody truly ‘got’ you growing up.

The lack of understanding for emo and goth cultures is no excuse for violence, though. We can never forget the legacy left behind by Sophie Lancaster. Her story will always remain an important reminder as to why our school systems need to iron out hatred against any kind of alternative identity.

“‘Greebo’ was a common thing to have shouted at you in corridors, sometimes by people you’d never even met,” Lauren says. “‘Barcode’ and ‘show us your wrists’ were also popular ones, [referencing self-harm] which I just think is so vile, especially because at the time I was struggling with my mental health.”

No matter the judgement we have faced, and continue to face, one thing has always been certain: growing up as an emo or goth was an experience like no other.

“I was welcomed into the rock and goth [night]clubs,” Dom fondly recalls. As someone with Cerebral Palsy who grew up using the aid of walking sticks, he says he found a sense of belonging in alternative spaces: “That community helped me to find out who I was. I found out I could dance with my sticks, that I could make lots of friends; then I got a girlfriend [and] was like, ‘Holy shit, I can do anything!’ These were things that people either thought I couldn't do, or actively told me that I would never do at the time.” Dom now works as a music journalist and counsellor, supporting those in the music industry and those with Cerebral Palsy.

“I loved the community,” Lauren continues. “I know it’s got its issues but there was just something magical about being out in public and seeing another group of emo kids. There’s that instant connection like, ‘Oh, you’re safe, you’re like me.’”

Jasleen feels exactly the same way. “I just loved how unapologetically obsessed we were with the bands and culture we loved. There was something really tribal about it.

“I still identify as an emo,” they add. “I always tell people: once an emo, always an emo!”

We couldn’t agree more. It was never a phase, mum…