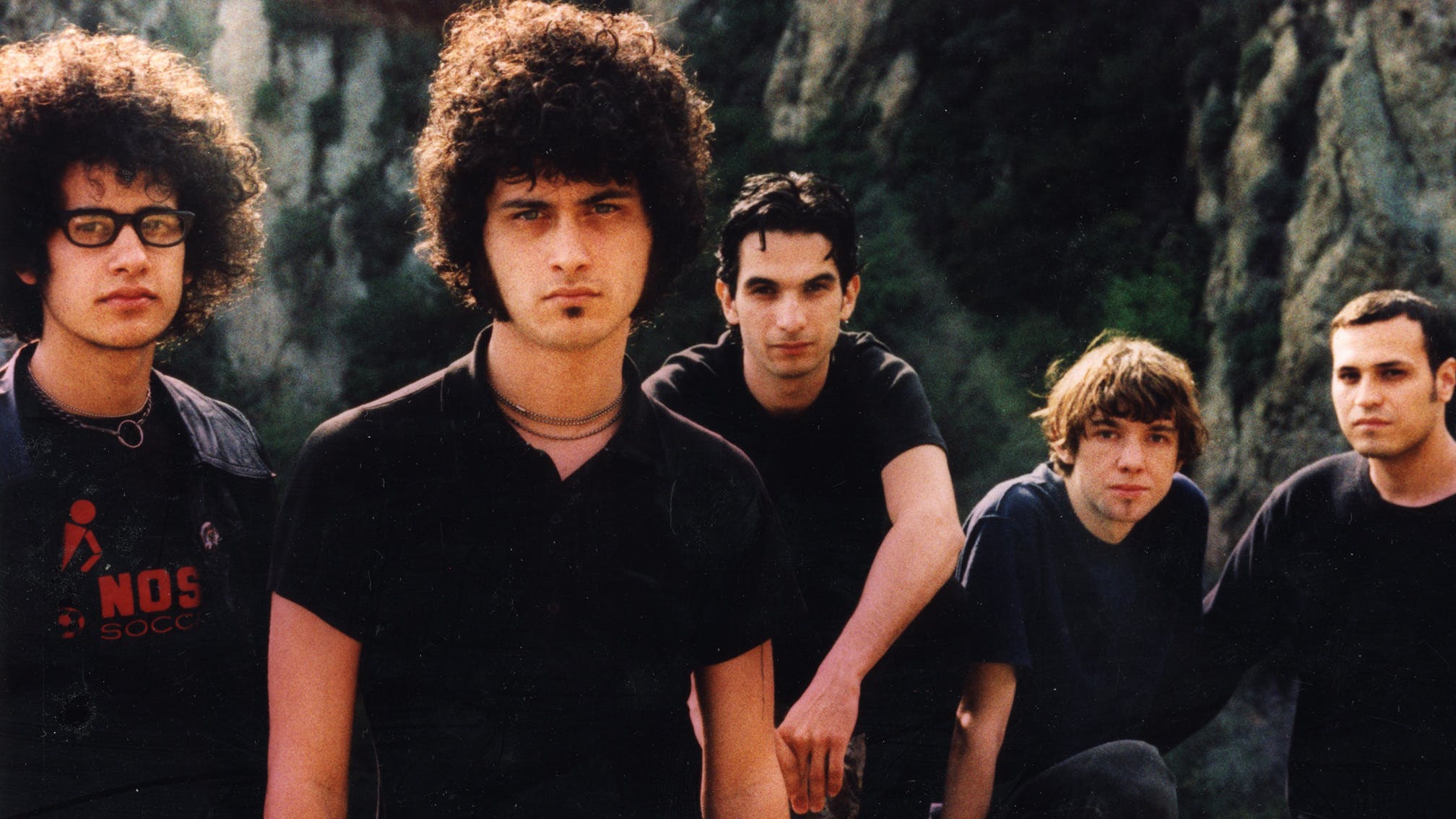 “This band can save rock.”

If At The Drive-In were hoping to avoid any hype ahead of the September 12, 2000 release of their third album, Relationship Of Command, on the Beastie Boys’ ultra-hip Grand Royal label, the El Paso, Texas post-hardcore quintet must have been mortified to read this bullish statement from their label’s director of marketing, Kristen Welsh, in the September 2 issue of U.S. trade magazine Billboard.

The quote would have raised eyebrows elsewhere in the music industry too, because, to most observers, the rock genre didn’t appear to need saving in 2000. The previous year had seen Limp Bizkit, Korn, Rage Against The Machine, Creed and Nine Inch Nails score Number One albums on the Billboard chart, while Americana by The Offspring was the seventh best-selling album in the country. The new millennium had dawned with the release of new albums from a rejuvenated Iron Maiden (Brave New World), AC/DC (Stiff Upper Lip), Deftones (White Pony), Pantera (Reinventing The Steel) and Motörhead (We Are Motörhead), there were new albums from the likes of Marilyn Manson and Soulfly on release schedules, and as the nu-metal scene exploded in popularity, there were high hopes for fledgling major label acts Papa Roach, Linkin Park and Disturbed. Indeed, before the decade was out, the latter two acts would rack up no fewer than seven U.S. Number One albums between them.

Welsh’s comment, one suspects, was rooted in a belief in certain sections of the music business that nu-metal wasn’t a worthy genre for the industry to throw its weight behind. When Nirvana’s Nevermind album debuted at the top of the Billboard 200 chart in January 1992, endless column inches were devoted to the idea that grunge had ‘killed’ hair metal – a scene which was viewed by its detractors as dumb, disposable and misogynist – and ushered in a new rock revolution.

Fast-forward to the end of the ’90s, and those same criticisms were being levelled at the leading players in nu-metal, not without justification, to be fair. In fact, one of the scene’s key architects, Ross Robinson, who had produced albums for Korn, Limp Bizkit and new freaks on the block Slipknot, was actively telling anyone who’d listen that he wanted to see the scene destroyed. In 2000, Ross’ name would be listed as the producer of three albums touted as having the potential to usher in a new age of rock: Amen’s We Have Come For Your Parents, Glassjaw’s Everything You Ever Wanted To Know About Silence… and At The Drive-In’s third studio album. Of the three bands, the latter had the most punk rock credibility (with a pair of acclaimed indie albums, 1996’s Acrobatic Tenement and 1998’s In/Casino/Out), the best back story (at least two band members had grown-up on the fringes of Hispanic street gangs) and a unique, striking visual presence, thanks to bandleaders Cedric Bixler-Zavala (vocals) and Omar Rodriguez-Lopez (guitar).

And when Relationship Of Command’s feral first single, One Armed Scissor, was sent out to media and radio stations in July 2000, whispers suggesting that rock’s newest saviours had arrived were amplified into screams.

Taking cues from the likes of Fugazi, Drive Like Jehu, Swing Kids and Bad Brains, One Armed Scissor was an adrenaline spike thrust rudely into the body of mainstream rock, Cedric screaming, ‘Pucker up and kiss the asphalt now!’ as the roaring, raging guitars of Omar and Jim Ward threatened to collapse in on themselves. As a preview of Relationship Of Command, it could not have offered a more compelling invitation to dig deeper.

Those who chose to do so found a body of work positively bristling with energy, excitement and electricity. Ross Robinson had sought to jolt the young musicians out of their comfort zones during the sessions at Malibu Ranch – “He would throw shit at us,” said Cedric. “Just to get your adrenaline going. It puts you on the edge. We were jumping off the walls, sweating, laughing, crying… It was one emotional rollercoaster” – and his unorthodox methods resulted in a recording that sounded raw, brutal and thrillingly alive.

Across its 11 tracks there were no let-ups, with the likes of Arcarsenal, Rolodex Propaganda and Invalid Litter Dept. (written about the rape and murder of hundreds of young woman across the U.S.-Mexican border in Juarez) as intense as any punk rock ever committed to tape. Here, finally, was a band to believe in, critics frothed. Never shy about dishing out hyperbole, NME hailed the band as “The New Nirvana”, and when At The Drive-In stormed through One Armed Scissor on the BBC’s flagship music show Later… (reducing fellow guest Robbie Williams to awestruck silence) they seemed like the single most exciting band on the planet. On November 25, 2000 the Texans appeared on the cover of Kerrang! magazine for the first time. Above a live photo of Cedric, the band were hailed as the leaders of “the new noise revolution”. And then it all started to fall apart… with the ass-kissing, the constant demands upon their times, and mounting irritation at a new macho element appearing at gigs taking its toll.

“The repetition of it all caused a certain amount of insanity,” Omar told writer Stevie Chick. Always a fiercely independent group, ATD-I bristled at being expected to play standard industry games – after refusing a request to fake a band mosh-pit during one magazine photo session they were told, “We asked Korn to wear monkey suits and they did it” – and when Omar and Cedric began to use cocaine and heroin heavily, inter-group tensions were hardly eased.

“I think sometimes people take this industry a little too seriously,” guitarist Jim Ward told MTV. “They put a little too much stock into how many records you’re selling and how much money you’re making. We have a deal in our band that day one of us is tired of doing this, that’s it.”

Jim’s words would prove prophetic. In March 2001, little over six months since the release of their extraordinary third album, the band cancelled a major U.S. tour and announced they were taking an indefinite hiatus. “We need time to rest up and re-evaluate, just to be human beings again,” said Omar. It would be 11 years before they would stand on a stage together again. The potency and impact of their stunning kiss-off to the industry only grew in their absence – with the likes of The Dillinger Escape Plan, Rolo Tomassi, Gallows, letlive. and Every Time I Die taking cues from their kinetic fury – even if they themselves were ready to move on. Ultimately, ATD-I didn’t save rock, but in ducking out of the spotlight when they did, they might just have saved themselves.

“We were just a bunch of kids from Texas who knew how to really thrive as the underdog,” Cedric recalled. “Then when we got on top, it was a weird thing to deal with. I never thought we were the next anything.”

At The Drive In

At The Drive-In Reflect On 20 Years Of Relationship Of Command: "You Changed My Life…"

Members of At The Drive-In celebrate 20 years of their seminal record, Relationship Of Command.

A Love Letter To At The Drive-In's Relationship Of Command

On the 19th anniversary of Relationship Of Command's release, one K! writer shares a life-changing encounter with the album in the Black Forest.

They've confirmed the first ever Thursday night headliner of the line-up and it's pretty sick!

​At The Drive In have made their Diamanté EP available digitally ahead of their UK headline tour dates this March.