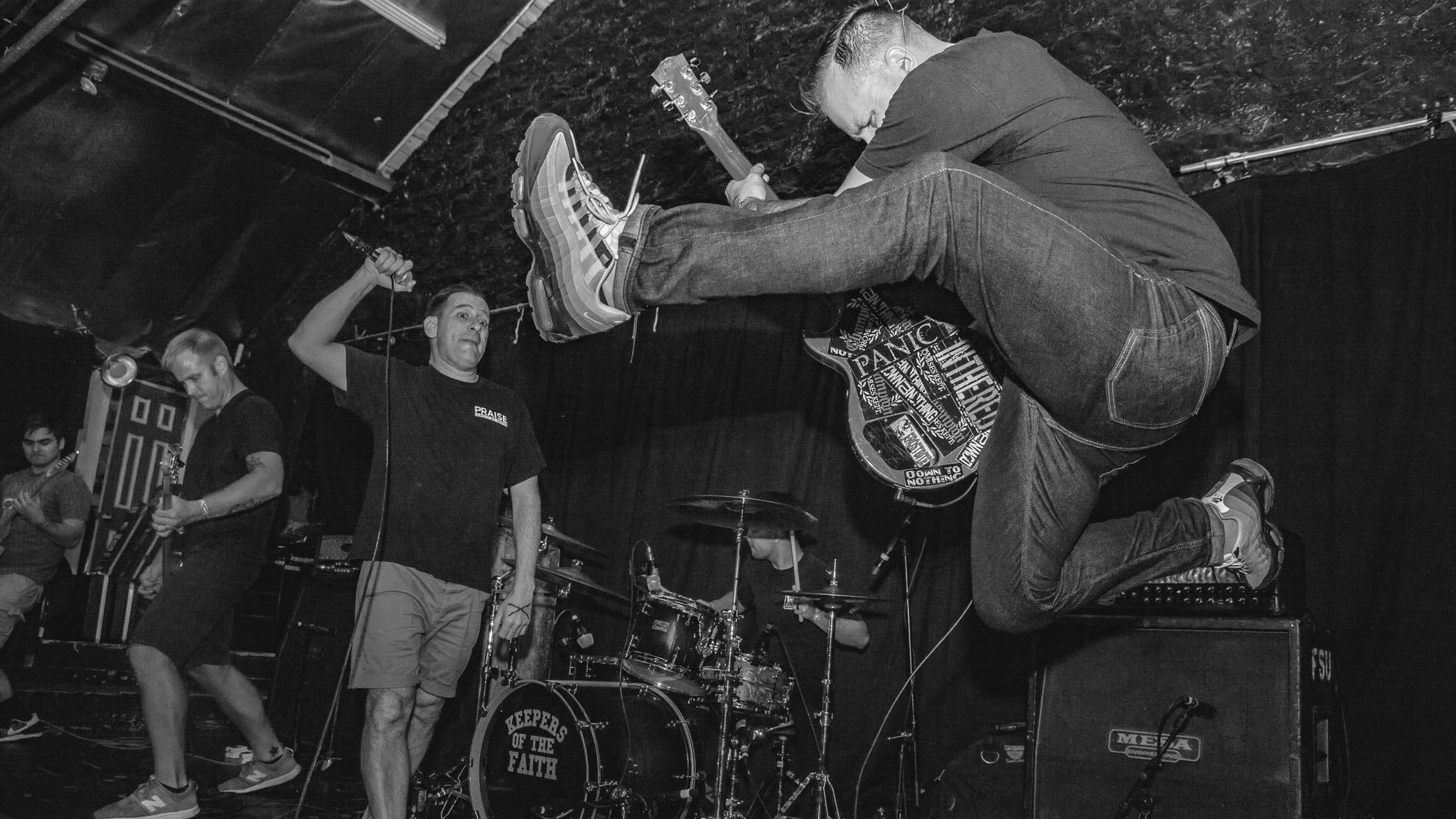 Aside from being a ripping hardcore band in their own right, Berthold City offer several reminders of the reasons that people decide to start hardcore bands in the first place. They’re fronted by Andrew Kline, guitarist with Strife and founder of the increasingly influential Los Angeles label WAR Records, and take their name from a font that you’ll recognise due to its association with bands such as SSD, Chain Of Strength and Gorilla Biscuits. Their music, meanwhile, is a deliberate attempt to pull out different strands in the hardcore tapestry to the currently dominant beatdown mode, almost creating a reflexive relationship with the genre.

Speaking with Andrew, who also plays in World Be Free alongside members of Terror, Judge and other legendary bands, is like opening a book on the past 30 years of hardcore in America, but his own focus is on the now and next. It helps that, given Strife’s cult status, he’s neatly placed to see the power that can be wielded by bands who can make existing blueprints pop all over again. The metallic ferocity of their 1997 LP In This Defiance, which featured a guest turn from Deftones’ Chino Moreno, among others, is a clear touchstone for the monstrous sounds coming out of the Bay Area. But that dynamic can cut both ways, and Berthold City are almost a rejection of that influence.

“In the last 10 years hardcore has been dominated by really heavy bands,” Andrew says. “I love that, but I really wanted to start a band that got back a little more to my roots and embodied everything that I loved about hardcore – sing-alongs and fast parts and mosh parts, really create a band that was hardcore without any metal influence whatsoever.”

Berthold City – completed by a string of straight edge hardcore vets in guitarists Dennis McDonald and Dave Itow, drummer Adam Galindo, and bassist John Jenkins – put out their demo in 2017, and the first songs Andrew wrote for the band wound the clock back to the 1980s, drawing on Boston mainstays such as SSD and DYS while tapping into the speed and melodic focus of Youth Crew greats Youth Of Today and Bold. “Hardcore is pretty cyclical,” Andrew says. “There'll be a style that gets popular, and then there's a lot of other bands that do something in that same style. Eventually, that style gets boring.

“Then there'll be a backlash, and bands will come out and do something completely different to that. So, to me, it sounded fresh, because other bands weren't doing it. We weren't hopping on a cool trend that everybody else was doing. It'll never go away, right? A lot of those bands are classic hardcore bands, so it may not be the most popular form of hardcore, but there's always going to be bands that are influenced by that sound.”

During the pandemic, Andrew set about making When Words Are Not Enough, the first Berthold City LP and a primer for how to advance a band’s mechanics without losing sight of what made it work in the first place. Recorded with Terror drummer Nick Jett at ​​Jet To Mars studio, it has a grinding, abrasive edge, riding a punishing rhythm section and smashing together the muscularity of Bane with Have Heart’s most anthemic, fist-in-the-air impulses. “It's really hard to write an album that holds someone's attention from beginning to end and that, you know, doesn't start to sound the same,” Andrew says. “We worked really hard to write the best record that we could and didn't want to limit ourselves.

“Nick's a great producer, and he's got a ton of amazing ideas,” he adds. “I'd come in with a song, but be open to reworking it. I'm working with a producer because I want that other input, I want some other suggestions, and I want to see where we can take this song and improve. Nick is really great with song structures, arrangements, and really good with vocal patterns.”

Andrew grew up in Thousand Oaks, a suburb around 40 minutes’ drive to the northwest of Los Angeles, and got into hardcore through skateboarding, Thrasher magazine and the record collection of a neighbour. “He was an older punk guy,” Andrew remembers. “I would go to his house, borrow five or six records at a time, bring them home and record them. He got me into Bad Religion, Agnostic Front, Negative Approach, he had everything from punk to hardcore to 2 Tone ska and jazz.”

Having already cottoned on to Suicidal Tendencies, Descendents and 7 Seconds through his small skate crew, in ninth grade Andrew started hitting shows with a straight edge kid who was a year older. “There was a place that wasn't too far called the Country Club, about a 30 minute drive,” he recalls. “Every band came through there, whether it was Bad Religion, Gorilla Biscuits, Judge or MDC.”

Thanks in part to Andrew and his friends, Thousand Oaks soon became emblematic of the smaller scenes that maintain Los Angeles’ hardcore patchwork. He met his Strife bandmates through skating or at shows – drummer Sid Niesen had already played on bills with luminaries including Youth Of Today while in a band called SDI – and soon they were putting on their own gigs and assembling zines either side of making the drive out to Long Beach to raid the shelves of Zed Records.

“​​There wasn't a hardcore scene where we lived so we started our own little crew, with kids from our high school, right?” he says. “We started going to shows together, we met Rick [Rodney, vocals] from Strife in line at the Country Club, and slowly we got, you know, five kids in our town into hardcore, 10 kids, to 20 kids. After we graduated every high school had 50 hardcore kids, and there were multiple bands in our town.

“When Strife first started, we were the only hardcore band in our area, and then later on there were bands like Eyelid, Countervail and Insurgence playing shows, putting out records. It was really cool to see a scene explode just from one local band, you know? If you wanted to be involved in hardcore, you had to go to shows because if you didn't go to a show, you wouldn't know when the next show was – you went to a show, you got a flyer for the next show. Zed was a little over an hour's drive. Once a month, you'd go down there, you'd pick up a zine, pick up a flyer, and that was the access point.”

Back in 2022, Andrew is stoked to see the trickle down effect that Turnstile’s boundary-smashing success is having on hardcore in the wider sense, while also pointing out a proliferation of venues and bands around Los Angeles that are making waves at community level. “There are kids who got into hardcore from Turnstile that are now Terror fans or Scowl fans,” he observes. “Their first exposure may have been Turnstile but now they're going to shows. To have that platform for hardcore is huge. Having a band like Knocked Loose is huge.”

He sees WAR as a way to plug his accumulated knowledge and contacts into this moment. Recent Bay Watch stars Bent Blue, out of San Diego, are among the label’s most exciting prospects, with their Dischord-derived hardcore crashing into the grimy, feral sounds made by a group such as recent signess Fixation, who hail from Philadelphia. “I think it's really hard for bands to cut through, there's a lot of noise,” he says. “I basically do the label as my way of giving back to the hardcore scene, and I'm really just trying to help bands that I feel deserve a chance.”

Listen to Casey’s brand-new single Great Grief – which is the “the first piece of music we wrote collectively after deciding that we wanted to do this again”.