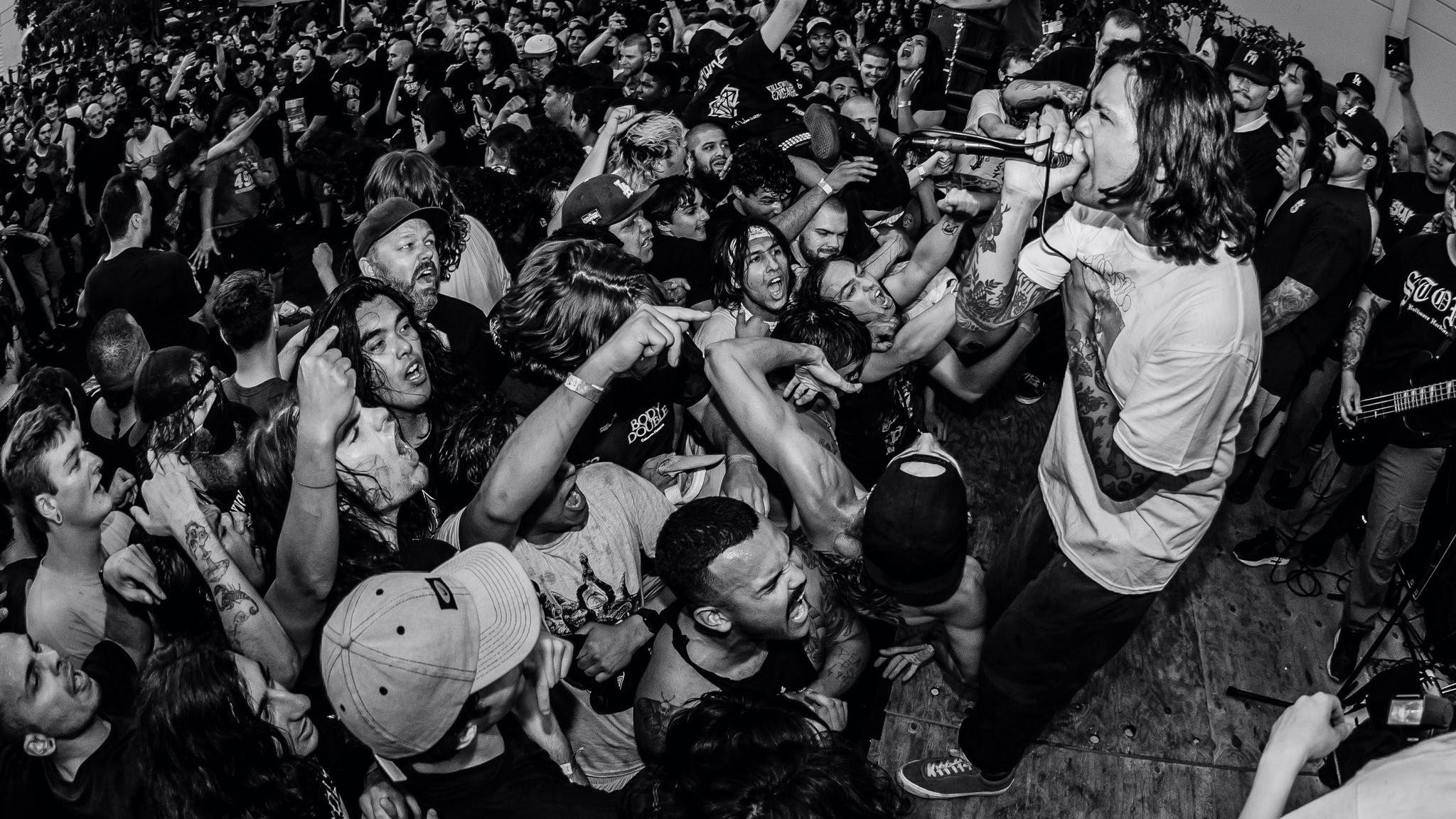 Here’s the thing: you might start a band as a goof, but you don’t really get to decide if it stays that way. If the songs are good, if the shows are good, then things can develop a momentum all of their own. Sunami know a little about this phenomenon.

It’s pretty straightforward to see how it all started, and the reasons why it’s currently going the way it is for the San Jose band. Sunami’s Twitter can sometimes appear to be the dumbest thing on Earth or a layers-deep meta-hardcore bit, and it’s not that their music doesn’t have the capacity to be funny, either. It’s almost comically heavy, for example, while one of the hardest mosh calls in a short discography packed with them is, 'Y’all softer than baby shit, I’ll try to turn off your nightlight, bitch!'

But that heaviness is wielded with so much nous and built-in hardcore knowledge, so much low-end heft and crushing scuzziness, that it quickly becomes a serious case of mosh or be moshed on. In a San Jose/Santa Cruz scene stacked to the gills with exciting bands, you have to go some to stand out even a little bit, and Sunami stand out more than most.

“We definitely didn’t plan to have the success that we’ve been having, but we’ve just been excited by the whole journey,” vocalist ​​Josef Alfonso says. “The goal is still to only have fun, but with a crowd reaction like the ones that we get during our shows, like, during the set, we just smile at each other. We’re just amazed that people even know our lyrics.”

Sunami’s music welds together swatches from D-beat, crust punk and beatdown hardcore with spidery thrash riffs and rapid-fire kick drum salvos. Josef is a charismatic figurehead, appearing tuned in to the ebb and flow of a crowd – even when a song has been confined to the sterile surroundings of a streaming window. From their 2019 demo through a 2020 self-titled EP and last spring’s unrelentingly brutal split with soon to be departed scene elders Gulch, they have hit upon a vein of consistency without settling into a pattern.

“That’s kind of all of us,” Josef says. “All of us love real aggressive stuff on the beatdown side of hardcore. I enjoy the faster punk aspect of hardcore a little bit more compared to the other guys. Our guitar player [Mike Durt] writes all the stuff musically, but I think we all appreciate everything about hardcore and death metal as well. We just put whatever we like on our music. We don’t have a goal to be one type of band. We’re just trying to do whatever is fun.”

Josef has been around hardcore since his early teens, taking in the insane mathcore of local heroes Heavy Heavy Low Low before he and his future bandmates were introduced to what was going on slightly further afield by San Francisco’s First Blood and Los Angeles vets Terror. Once they got embedded in the scene, they were all in. Sunami shares or has shared members with Field of Flames, Big Boy, Hands Of God, Drain, and Gulch, among others, and their own chaotic style is obviously the product of experience rather than study from afar.

“I’ve known everyone who’s part of the San Jose/Bay Area community for a really long time,” Josef says. “It’s less about, like, what type of genre a band is – in San Jose especially, I think there’s like a real strong tribalism that goes on. As long as they’re my friends I’m going to support them no matter what. And fortunately, in my opinion, all my friends’ bands sound good.”

The ripples from the Bay Area scene have been turned into waves by social media. It’s fun to sit back and, from the safety of your home, watch unbridled carnage unfold in someone else’s living room or, in the case of last summer’s now canonical Real Bay Shit event, a parking lot. Sunami have certainly benefited from this dynamic.

A clip from their first show, uploaded to YouTube by Josef, has been viewed almost 150,000 times, and it’s an outlandishly perfect rendering of the antic spirit behind the band. The pit is wild – two parts straight-up violence and one part Looney Tunes. One dude spends his time throwing haymakers in full boxing attire, gloves included. “With the little house show, it was already insane that it was like that,” Josef says. “But right after the show, the reaction was so insane. We got offers already to do cool stuff. The trajectory of our band specifically was crazy because it just happened so fast.”

A grounding element is the DIY ethic of the San Jose/Santa Cruz scene. There is some earned confidence at work in those circles, with the belief that they can do things themselves, wedded to a commitment to do them well. Josef is in that camp. “In terms of the shows that go on here, it’s all being thrown through our friends,” he says.

“Like, if it’s not me or Malachi [Greene] who plays in Scowl, it’s more of our friends. No disrespect to other promoters or people that throw shows here, but my bands and our friends’ bands know what’s possible and what we could do with our music. We just want to do it ourselves, you know what I mean?”

What comes next is a weird question with a band such as Sunami, who seem to have been swept along by forces only partially of their own making to this point. They’re playing the immediate future the same way they've done everything to this stage, with loose plans allowing space for improvisation.

“So right now we have a good amount of shows planned up into, like, September of this year,” Josef says. “Then the goal is to write an LP with Triple B records. We don’t really have a timeline for it, but we did already record a three-song promo. And then once we finish off the shows, I think we’re going to seriously start writing for the LP.”

In hardcore, nothing is a safe bet. Bands flame out all the time – it’s kind of expected and almost the done thing. Josef is aware of the fact and at ease with it. Sunami’s story is really only just beginning, but it’ll only run for as long as it feels good.

“Like I said, we didn’t really plan on having this band go the way it’s been going,” he says. “So it’s still hard for me to even comprehend how big it is. And I’m still just trying to have fun. When it’s not fun, I’m down to straight up not do it anymore. But, right now, I’m just riding it.”

Listen to Casey’s brand-new single Great Grief – which is the “the first piece of music we wrote collectively after deciding that we wanted to do this again”.