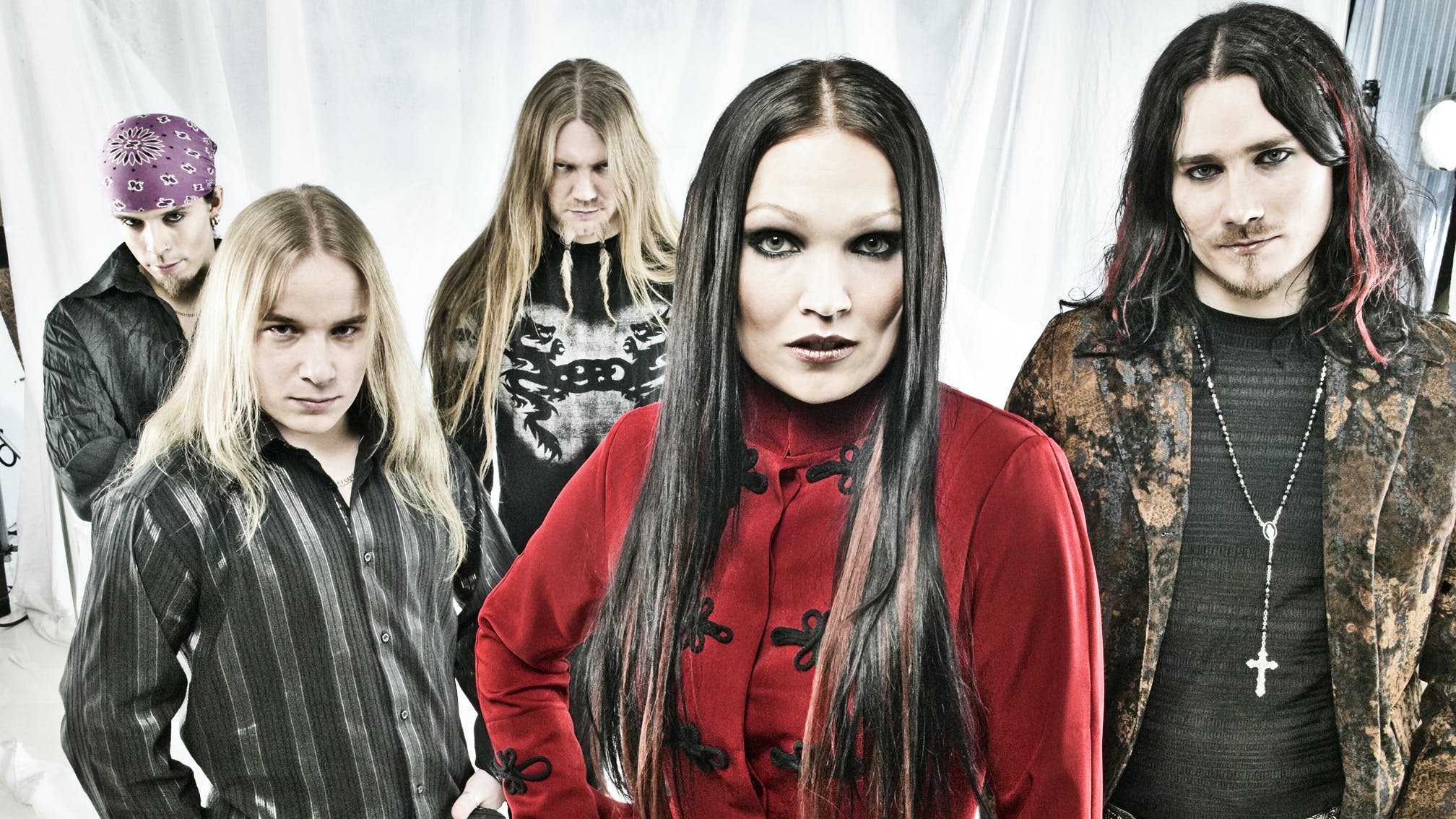 "Doing this kind of really orchestral, symphonic stuff for four albums, you have to be prepared to take the next step, and go 10 steps beyond.”

On a freezing cold afternoon in early 2004, Kerrang! was invited to Phoenix Sound Studios in London, just behind Wembley Arena, to watch a creative vision come to life. Very, very slowly. In the studio’s enormous live room, two dozen choristers perfectly repeated a dramatic musical phrase that sounded like something from The Omen soundtrack. Above, in the studio’s control room, Tuomas Holopainen paced endlessly, eyes screwed up tight, at once agitated, focused, excited, confident and anxious, flicking his finger in time with each stabbing vocal. “Again,” he’d demand, tape would roll, and the same 10 seconds of music would strike up again from the massive speakers, as the choir tried to hit the miniscule bullseye the Nightwish keyboardist had in his mind’s eye.

This process went on for ages. When it was finished, there was no relief, the choir just moved on to the next bit. And Tuomas started pacing again.

The song was Dark Chest Of Wonders, the track that would eventually open Nightwish’s fifth album, Once. By this point, the band had already risen to become one of the biggest metal acts in Europe and bona fide celebrities in Finland, while Tuomas’ skills as a composer and keyboardist had marked him out as an artist with ambitions that went far beyond metal. Indeed, when he finally took a break for a cigarette between takes on that day, he told us that, “I truly believe what we are doing is film music covered by the mask of heavy metal.”

Now he’d been afforded the chance to let his imagination go wild. For the first time, Nightwish’s success meant they had a budget to do what so far had largely been done synthetically, and actually record with a full orchestra and choir. Their breakthrough album, 1998’s Oceanborn, had been recorded in a damp school gym, about which Tuomas reflected, “We were all such amateurs when it came to recording. We didn't really know what we were doing!

“We brought in this string trio, who were complete shit, then another violin, then another violin on top,” he recalled. “So we ended up with Moondance having 20 tracks of violin, just because we hadn't done this before and didn't know what we were doing!”

This time, they had the London Session Orchestra at their disposal – you know them, they did The Lord Of The Rings soundtrack – and help from classical producer and arranger Pip Williams. If Tuomas had been antsy about getting the choir right on the day we joined him at the studio, it was a different story when it came to capturing the album’s epic orchestral elements.

“It was pretty laid-back from our side because everyone involved in the orchestra really knew their stuff, so we basically spent two days lying on the couch hearing all these people playing our songs, enjoying every moment,” he said. “It was one of the most amazing experiences in my life. The first song they started to play was Ghost Love Score, and we had no idea what to expect. I just thought, ‘This can't be happening!’”

Creatively, Once was staggering. Though orchestra and band weren’t a new idea – not least from Metallica, with their S&M live album – nobody had quite yet fused the two so naturally, or so skilfully, as this. And what was remarkable was how accessible it was: Dark Chest Of Wonders, Wish I Had An Angel and Nemo were all single-length bangers, while Planet Hell showed a genuinely aggressive edge. And where the grandstanding drama did take a front seat, on Creek Mary’s Blood, Higher Than Hope and the excellent The Siren, it was almost overpowering.

Ahead of the album, the single Nemo was released in April 2004, and immediately went to Number One in Finland. When the LP followed a month later, it repeated the trick, as well as hitting the top spot in Germany and Norway. Kerrang! awarded it full marks, and it was in the UK that the signs of quite how massive a record Once was were the most telling. The chart positions weren’t much to boast about, but Nemo became a fixture on rock TV stations, while the audiences at British shows grew enormously. Largely because there actually were shows now. Six years after their first record, the band had made their UK debut the previous August, headlining 2003’s then-indoor Bloodstock, and then played London’s 800-capacity LA2 the following night – both seen as rare events. But with Once, they were touring properly, to rooms of over 1,000 a night, eventually selling out Hammersmith Apollo like it was no problem.

“This is one of the hardest markets to crack,” admitted Tuomas, backstage at London’s Astoria a year after recording the album, “But we’ve worked our asses off.”

It was hardly surprising, though. By this point, Nightwish had comfortably become one of the biggest metal bands in Europe not named Iron Maiden. In October 2004, K! joined them on tour in Germany, where they played Nuremberg Arena (a massive ice rink), and Munich Zenith (a massive aircraft hangar). It was a trip notable for two things: one, a smashed window at the band’s hotel in Nuremberg got Kerrang! awoken at 6am by German police, mistakenly thinking we were a) responsible, and b) part of the band’s crew, and sent us to wake all of them up. But it was also a tour where you could see a band exploding in real-time. And they were doing this every single night.

But if Once marked a creative and commercial high-point for Nightwish, it also heralded the end of an era. In October 2005, the band graced the cover of Kerrang! for the first time, a shot of singer Tarja Turunen in a Finnish church, holding a sword, under the headline ‘The Queen Of Metal Will See You Now’. But in the piece, it couldn’t be avoided how much distance there was between the vocalist and her bandmates. In Germany the previous year, she’d admitted that, as a classical singer, metal wasn’t exactly her turf (“Our fans have a lot of respect for me because they know I’m not a heavy metal singer,” she laughed, “They know I am a lady, not a rock bitch,”) but that didn’t really matter because it worked so well. Here, though, the vibe from her bandmates was one of trouble in paradise.

The piece was called out by some fans for commenting on, apparently stirring up, this friction. But at the end of the Once Upon A Tour run, immediately following a triumphant final show at Helsinki’s Hartwall Areena, Tarja was sacked via letter sent from Tuomas and signed by the rest of the band, citing difficulties with her attitude, her husband and manager, and having literally said that “the next Nightwish album will be my last”.

Stingingly, it was also posted online by the band. Whatever your thoughts on this, points of the missive are, in hindsight, telling of what had happened to the band over the previous two years, and just what Once had done. “It's time to choose whether the story of Nightwish ends here or whether it will still continue an undetermined period of time,” it read. “We've been working with this creation for nine years and we are not ready to give up yet. Nightwish is a way of life, something to live for, and we're certain we can't let it go.

“You have said yourself that you are merely a ‘guest musician’ in Nightwish. Now that visit ends and we will continue Nightwish with a new female vocalist. We're sure this is an equally big relief to you as it is for us. We have all been feeling bad long enough.”

But the letter also points to a confidence in the band – that they had reached a point of being almost too big to fail, and that such a huge change in personnel could be swallowed. “In interviews I've mentioned that if Tarja leaves, that would be the end of the band. I understand that people will think this way,” Tuomas wrote. “Nightwish is, however, a scenery of my soul and I'm not ready to let go because of one person.”

It was a gamble that would save Nightwish, rather than allow the band to fall apart. Sixteen years – and, indeed, two singers – on, Nightwish remain one of Europe’s biggest metal bands. Every album since Once has been recorded with an orchestra and choir, as Tuomas continues to prove himself as a truly singular musician, part sonic visionary, part magician. But it was Once that pushed them from being a (big) cult concern into genuine megastars, where genius collided with success and propelled them to a height from which they have yet to fall.

Nightwish’s Once remastered version is out now via Nuclear Blast.