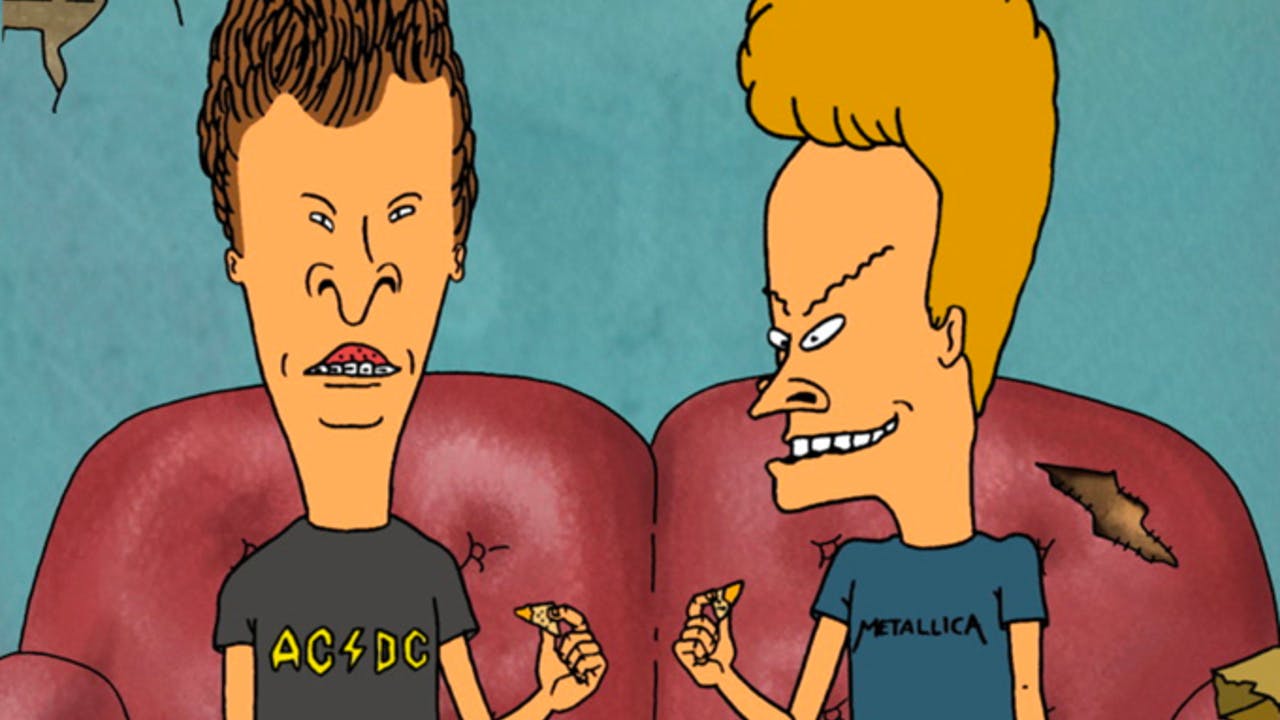 Beavis and Butt-Head were ahead of their time. Sitting around, watching stuff and commenting on it has always been a thing, but Highland High's shorts-and-school-shoes duo were the first to broadcast it. Twenty-five years later, two-thirds of YouTube is made up of people talking nonsense over game footage, a million podcasts a week are launched with the idea, "What if we watch an episode of a thing and riff on it?" and every country on Earth has some primetime variation of, uh, television about people watching television. For our heroes, though, the medium of choice was always music videos, and while a lot of their commentary is limited to how much fire is on screen, occasionally they go fully knives-out on a band. Here are some of their meanest 1K reviews…

“It's like, these guys suck so bad, they have to go to their concerts in these armoured vehicles.”

NWOBHM band Grim Reaper – fronted by Steve Grimmett, so it’s not just a dramatic moniker – have never been household names, but do have the honour of being the only band to have all of their videos viewed by MTV’s favourite slackers. Despite Beavis and Butt-Head themselves not being fans (in their two other videos, one is spent talking about urinal cakes, while in the other the boys suggest Steve won a best pig competition), one of the show’s producers was. Thankfully, Steve and the band found the whole thing funny.

“This video tells a message. The message is: Vince Neil is a wuss.”

Beavis and Butt-Head were not fans of the Mötley Crüe frontman. His solo effort Sister Of Pain prompted such comments as, “Just because you have fire in your video doesn't mean you're cool”, “Tommy Lee should have shoved that drumstick up [Vince’s] butt”, “Who writes this crap?”, “This sucks”, and the repeated, “Vince Neil is a wuss.” They also told Rolling Stone, “He looks like a chick.”

“This music is slow and fat.”

While not as famous as Mötley Crüe, New Orleans sludge pioneers Crowbar were delighted to have Beavis and Butt-Head suggest – on two occasions – that frontman Kirk Windstein seemed like he was taking a dump. In fact, they campaigned to be on the show. Kirk told Noisey, “We wrote something in a letter like 'We're a bunch of fat guys, have fun with it if you want, we're all about it and we think it's hilarious.'

“…There's almost not a show that I'm at, barely a day goes by, that somebody else won't come up to us and say, 'Man, I remember y'all all the way back from Beavis and Butt-Head!' In my opinion it really worked and helped us out as far as getting the name out there.”

“These guys live on the edge!” “Yeah. The edge of Wuss Cliff.”

Winger got a lot of shit from Beavis and Butt-Head, primarily via their weedy nemesis Stewart, who was a huge fan. While creator Mike Judge claims the decision was mainly due to no other band’s logo quite working on his shirt, the show has long been at least casually blamed for Winger’s decline. Mike was erroneously told that frontman Kip Winger had contacted MTV demanding fewer jokes at his band’s expense, which led to a doubling down. However, Mike and Winger have since made up.

The boys spend half of Journey’s video talking about Barry Manilow and half muttering things like, “This is horrible”, “And it sucks, too.” Frontman Steve Perry’s hair, which is unbelievable, doesn’t even get a mention. Not that Beavis and Butt-Head were above criticising people’s appearances – in AC/DC’s Highway To Hell video, “Brian Johnson looks like he’s taking a dump”, while in the 2011 revival, 3OH!3 are savaged with, “These guys both look like asswipes, but in two completely different ways.”

“I kinda feel sorry for these guys, you know, because um, I think it's probably not their fault that they suck so much.”

They really go in on King Diamond. Butt-Head describes this video as “the worst crap I've ever seen in my life”, while lamenting, “This is really sad. It's probably like, you know, he has kids and stuff, and he's like, 'Okay kids, I gotta put on my make-up and go do another show.'" It’s not limited to this video, either – The Bell Witch clip by Mercyful Fate (fronted by King Diamond himself) is treated the same. “Look at this dumbass!” cries Beavis, “How come he's the only one wearing make-up?” Butt-Head suggests, “It's like, him and the band all got together and stuff, and said, ‘Okay, man, tomorrow, we're gonna wear some really scary scary makeup tomorrow, and it's gonna be really cool. We're gonna kick some ass.’ But then this dumbass was the only one stupid enough to do it!”

Metallica – For Whom The Bell Tolls

“Sit your ass down, Lars. Play the drums like you're supposed to.”

Beavis wears a Metallica shirt (although only in the cartoon – on merchandise that created licensing issues, so the boys’ tees were changed to SKULL and DEATH ROCK), and is a huge fan (despite struggling to recognise the beginning of One). Butt-Head, however, insists that they suck. It is this Shakespeare-level internal dynamic that led the duo to such dramatic moments as, uh, Beavis saying Metallica rule and Butt-Head slapping him in the face and saying they suck. However, few truer words were ever spoken than Butt-Head’s observation: “That James Hetfield dude looks like the Cowardly Lion.”

“‘Sucks’ isn't strong enough a word to describe this crap.”

Electric Sun isn’t a name you hear flung about a lot these days. They were formed by Scorpions member Uli Jon Roth after leaving that band, and disbanded in the mid-’80s. Beavis and Butt-Head weren’t fans of his old band, either, turning off Scorpions’ Rock You Like A Hurricane to, in their words, “Try to find a video that doesn’t suck.” Few bands had as many accusations of sucking thrown at them in as concentrated a manner as industrial outfit Skatenigs, who prompted this review from Butt-Head: “You know, like, this band sucks. But it's like, they suck, like, in new ways, you know? Like, they suck in ways we haven't, like, seen stuff suck before. So it's, like, pretty cool.”

“That guy has a disease… He has wussyitis!”

John Lydon’s post-punk band weren’t favourites of the boys – in fact, other than Ozzy Osbourne, they had few good things to say about any British acts. Their review of Blur’s Parklife: “England sucks. You know those asswipes the Beatles? They ruined music!” Pink Floyd were deemed to be “just another bunch of wussies from England”, while The Shamen led them to conclude, “These guys are from that country where everything sucks.” Perhaps their most damning review of any British record, though, went to Radiohead’s Fake Plastic Trees, which led Beavis to remark, “Sometimes if I have a boner that won't go down, I listen to this kind of music.”

Cannibal Corpse – Staring Through The Eyes Of The Dead

“If these guys practiced their instruments as much as they practiced shaking their hair around, they'd be, like, pretty good, probably.”

For death metal fans, Beavis and Butt-Head were never afraid to slag off the big dogs. They called Carcass vocalist Jeff Walker “a buttmunch [who] sounds like Dave Mustaine – what a buttmunch”. A Morbid Angel video begins with, “Hey, look, it's another one of those heavy metal videos with a naked dude all curled up on the floor.” Death – the Florida band, not the terminal life event – got a proper going-over. Beavis’ impersonation of vocalist Chuck Schuldiner – “I'D LIKE TWO TACOS, PLEEEEEEAAAAAAAASSSEEE!!!! AND A SMALL ORDER OF FRIIIIIIIEEEESSSSS!!! TO GOOOOOOOO!!!!!” led Butt-Head to comment “That was pretty good, Beavis. You suck almost as much as this dude.”