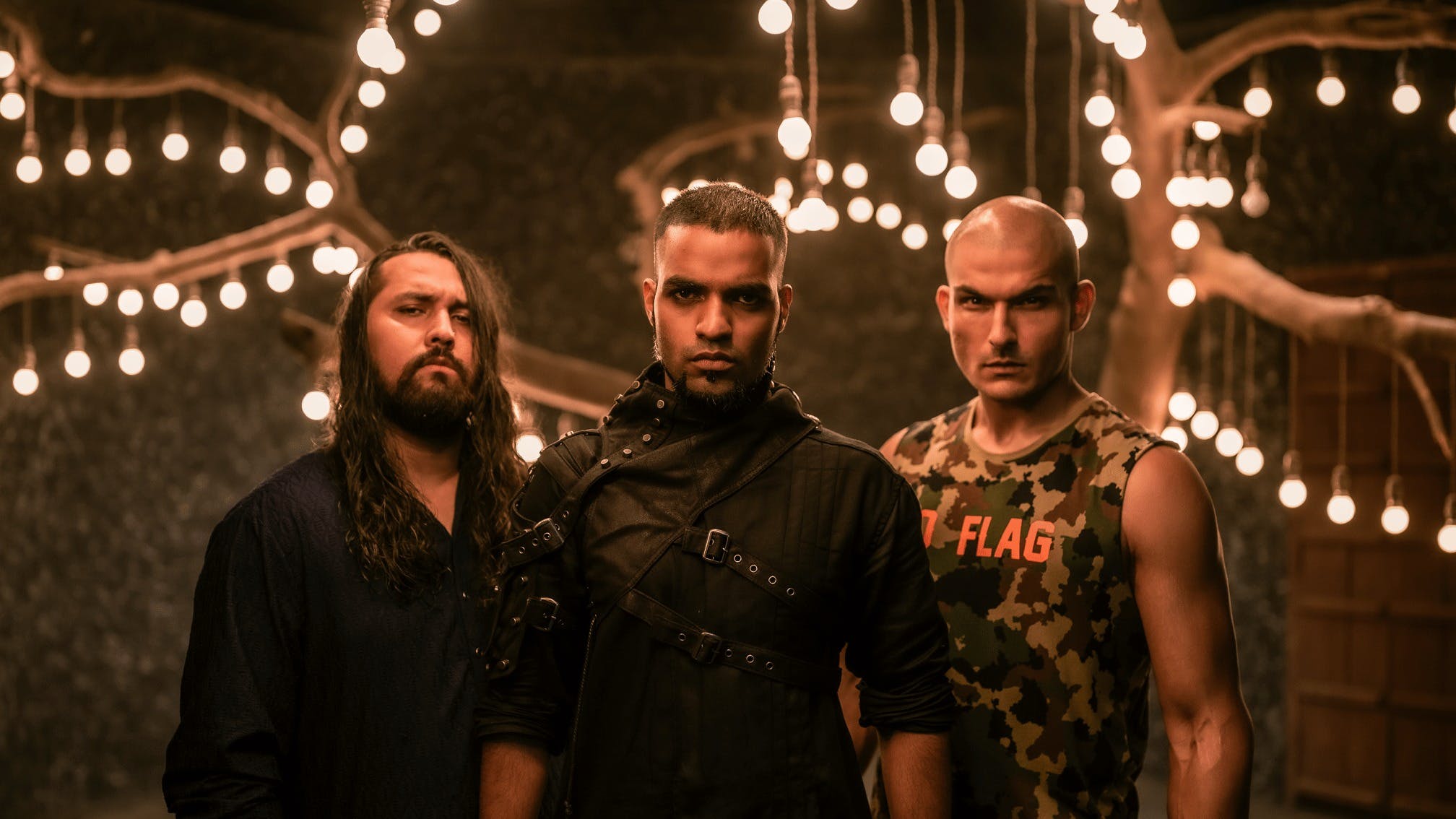 When Bloodywood toured Europe in 2018 on their punningly-titled Raj Against The Machine tour it was, to quote guitarist, producer and composer Karan Katiyar, a “life-changing experience”.

“I don’t think we've recovered from that experience and it's been two years,” he laughs. “It was like a month-long movie for us, it's every emotion times a thousand. Our friends are sick of us talking about it all the time because that’s the last interesting thing to happen in our lives before the pandemic struck. We want to experience that again.”

It looks like they’ll get the chance as they’ll be returning to Europe in March, with a UK stint included and a delayed appearance at this year’s Bloodstock in the offing. This time, though, they will also have their incendiary (sort of) debut album Rakshak under their belts and a growing sense of excitement surrounding the band. Indian metal legend Sahil ‘The Demonstealer’ Makhija is one of many who believe that Bloodywood could be the first heavy band to explode out of the country to major international success.

“India is so big and diverse that nothing is definitively Indian,” the Demonic Resurrection mainman told us recently. “But Bloodywood has captured what the West or anyone else in the world would want to hear when they ask, ‘What would Indian metal sound like?’”

That sprawling sense of diversity is captured perfectly on Rakshak. With lyrics delivered in a mixture of Hindi and English and a constantly shifting sound, it’s wonderfully difficult to pin down. Not only do they use folk music from around the subcontinent (although centred on the northern Punjabi region), they also dip into different parts of the metal spectrum. There’s a definite nu-metal groove to many of their songs, but they also bring in thrash elements and a super-heavy deathcore lurch at times.

“It's so hard to put us in one particular genre,” nods Karan. “The sound changes so much with each song so it's hard to stick to the Indian folk-metal tag. There are way too many genres to specify but the best way describe it is to say you have modern metal with Indian groove and traditional Indian instruments, and of course hip-hop.”

“It’s a wild amalgamation. We're looking for a sweet spot between eastern and western influences. It's Indian at its core but with a universal message,” continues Raoul Kerr, who provides the rapped parts of those hip-hop elements.

“I would say it’s metal with masala,” adds fellow vocalist Jayant Bhadula, to general laughter from his bandmates.

However you describe it, Bloodywood have a very unique sound indeed – but it’s one that took a while to develop. The band formed in New Delhi in 2016 and quickly became something of an internet sensation with a number of metallised covers of pop and folk songs. There was even a moment of genuine Bollywood crossover when actress Ileana D’Cruz shared their version of bhangra-pop hit Ari Ari with her millions of Instagram followers. This gestational period culminated in the album Anti-Pop Vol. 1, featuring brutalised covers of songs by the likes of Backstreet Boys, 50 Cent and Ariana Grande, as well as Nirvana and Linkin Park. When they weren’t riff-rolling Rick Astley, though (yep, there’s a splendidly heavy version of Never Gonna Give You Up on there), they were working on their own material and slowly metamorphosing into something altogether more serious.

You might still get the occasional raucous cover thrown into the live sets, but the band came to realise that there were more important things to aspire to than their early stated aim of “destroying pop music”. As well as developing their own sound they started to use the platform they had built to stand up and speak out about the things they believe in.

The Hindi title Rakshak, of what Bloodywood consider be their ‘real’ debut album, translates as ‘Protector’ and there’s a theme to many of their songs. “When you listen to the songs there is a sense of protection, but not in the sense that there will be a saviour coming to save you,” explains Jayant. “It’s more like you are your own saviour, you have the strength within you to meet challenges. If you look at the artwork, this is what I took with the kid and the elephant – the elephant is the representation of the strength within this fragile creature.”

“That's the individual level but from a larger point of view we have songs talking about guarding the people and beliefs that represent hope for a better world,” adds Raoul. “Whether it's about eliminating divisive politics, ending sexual assault or holding corrupt journalists accountable. It's about protecting that sense of hope.”

The band – who are formed around that central trio of Karan, Jayant and Raoul with additional touring members when they hit the road – have also written about issues such as mental health and bullying. Raoul says they try to take things “beyond the music” whenever they can, though, whether that’s giving away prepaid online counselling sessions to fans in need of them or donating tour profits to provide an NGO with an ambulance to help homeless animals.

For Raoul that Raj Against The Machine tag (which is also the title of a tour documentary the band shot around their first European run) was more than a mere pun. The rapper cites Rage Against The Machine as his biggest influence both musically and in terms of activism. “They proved how far music can go from a political and socio-political view and how strong that relationship is in terms of rallying people behind ideals and ideas,” he says. “Most artists want to leave a mark with what they do, and we want to have a positive influence on people's lives. It’s something we keep in mind whenever we write and the theme of this band in general is that it has to be something that adds value to this world.”

They’ll get to take that combination of positivity, righteous anger and stunningly unique music to the world very soon. But do they agree with the Demonstealer that they’re poised to take over?

“We don’t know where it's going to go exactly, but I can tell you with one hundred per cent certainty that we gave everything to this album,” Raoul says with a measure of humility. “But it does feel like a perfect storm,” he adds with a grin. “We're coming back at a much higher level with a whole new set, there are festivals and it’s going to be as big as it's been so far for us.

Bloodywood's debut album Rakshak is due out on February 18.

Meet the man who brought metal to India

From bands to record labels to festivals, Sahil Makhija is a true pillar of Indian metal. And he’s going to do everything he can to grow the scene further, too…