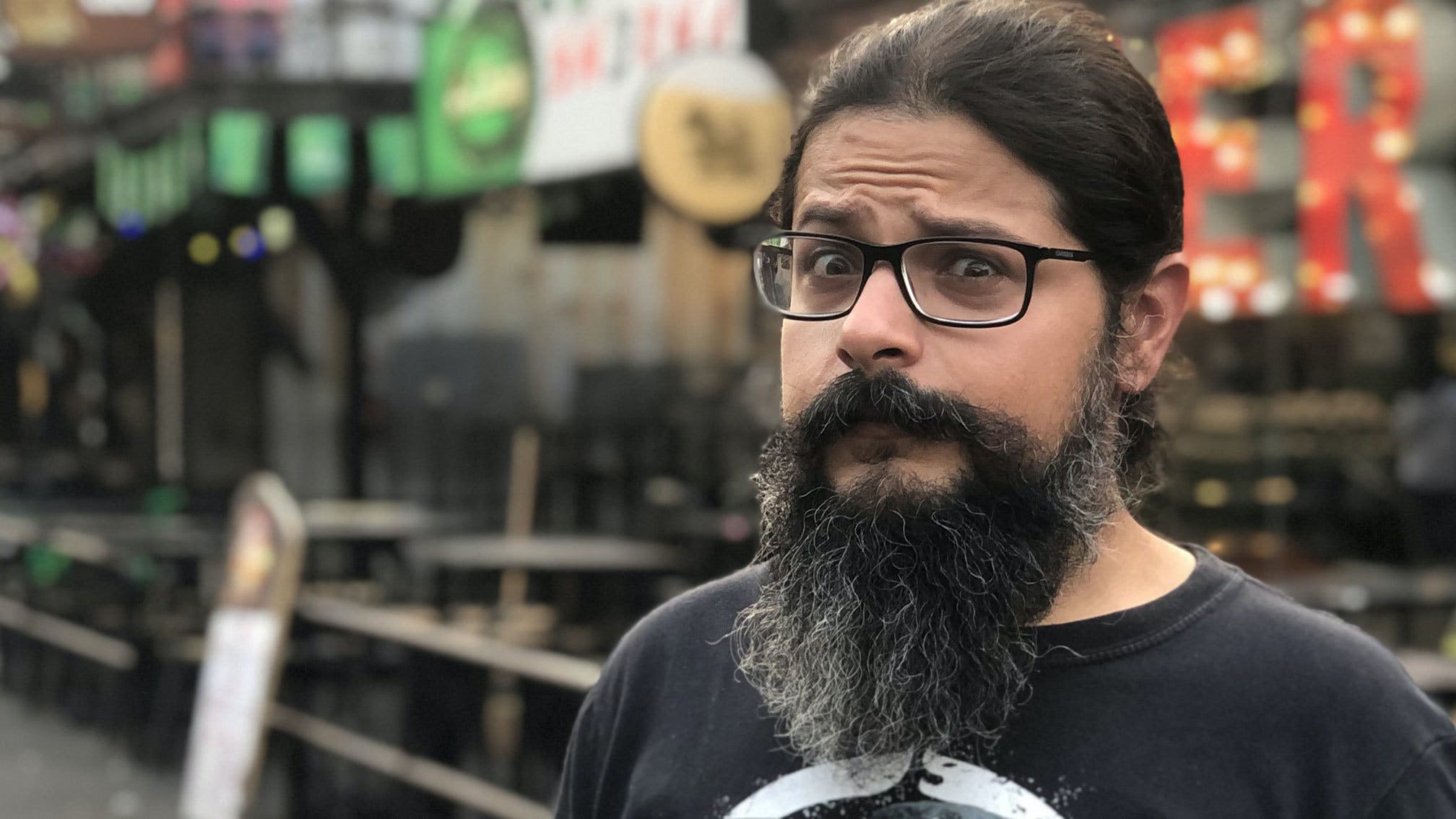 When Mumbai metalhead Sahil Makhija, better known as The Demonstealer, first emerged with symphonic death metal trailblazers Demonic Resurrection at the turn of the century, they weren’t exactly greeted with open arms.

There had been metal bands like Post Mark active in India since the late-’80s, but it remained very much a hidden niche and the fans that did exist wanted to hear their favourite acts from Europe and the United States. With only Iron Maiden making the country even a semi-regular tour stop, it meant that most of the local bands stuck to mainly playing covers.

“We were in the wave of bands around that time that started playing more original music, and we were the ones that got the bottles and stones thrown at us from the audience,” Sahil laughs. “We didn't have a lot of things back then – even a double bass pedal was difficult to come by. There were no record labels, there was one local rock magazine called Rock Street Journal and some of the bigger universities would have a cultural festival every year where they would have a battle of the bands. That was all there was at that time.”

Faced with this lack of resources, Sahil decided that if he wanted to make his band happen, he would have to do things himself. He established India’s first recording studio dedicated solely to metal and, shortly afterwards, the country’s first metal label in Demonstealer Records. As well as putting out his own music and supporting fellow Indian bands like Albatross and the now-defunct MyndSnare, the label licensed and released difficult-to-access albums by the likes of Behemoth and Dimmu Borgir. As if this wasn’t enough, he also set up and ran the Resurrection Festival, which for years was India’s only dedicated extreme metal festival, alongside former Demonic Resurrection bassist Husain Bandukwala.

The Demonstealer’s status as a pillar of the Indian metal scene is undisputed, but ask him about his influence and legacy and the man himself is characteristically modest. “I just did what I had to do at the time because there was nobody else doing it, but if I hadn't someone else probably would have come along and done all these things at some point. But if I did contribute in any way, I'm happy with that because I've dedicated my life to playing metal music.”

Indeed he has. Societal structures and endemic poverty levels, Sahil explains, coupled with the lack of any meaningful music business infrastructure, mean that you need a basic level of income just to keep a band in existence in India. The vast distances involved mean that you can’t just jump in a van and embark on a national tour, so costs for flights and hotels need to be factored in. And, until recently, it was rare to find a venue with its own PA system, meaning these had to be sourced and hired at each stop. “It works out very expensive and most bands end up losing money, which is why they break up in the long run. Now there are bands selling merch and trying to make things happen. There are some bands that can tour but it's not an easy thing to do,” he adds.

Sahil decided early on that he would do whatever it took to make things happen. “I designed my life in a way that would allow me to keep playing metal, he says. “I chose to stay with my parents, to not have kids, to not spend money on holidays. I made those sacrifices because I knew this is what I wanted to do and if I was taking a job that didn't pay me as much as my friends and peers, I'm going to have to figure out how to live on that budget.” Luckily, he pretty much stumbled into a career as a YouTuber with a channel and show called Headbanger’s Kitchen. Initially starting as a general cooking show that would also see him interview fellow metal musicians, it evolved into a platform advocating the keto diet that Sahil follows and now provides his main source of income.

Metal remains his first love, though, and, thanks partly to his own efforts, the scene has started to blossom over the last decade or so. COVID obviously slammed the brakes for a while and it’s still pretty niche – “the bastard child of everything that’s not Bollywood” as Sahil puts it – but there is a lot of colour, creativity and vibrancy on display if you know where to look.

One rising star you might have heard of is New Delhi’s Bloodywood. There’s a growing buzz surrounding their unique sound, which combines slamming rap metal with Indian folk music and weaves English, Punjabi and Hindi through lyrics that tackle political and personal issues head-on.

Sahil agrees that they look like the Indian band most likely to break out to an international audience – with a European tour including four UK dates in February and a delayed appearance at Bloodstock later next year all on the cards.

“India is so big and diverse that nothing is definitively Indian,” he says. “They use Punjabi music but that music is not popular in the southern part of India, where they have a different language and culture and music. We don’t have a national language and everything is so diverse. But Bloodywood has captured what the West or anyone else in the world would want to hear when they ask, ‘What would Indian metal sound like?’”

The Down Troddence are another band blending elements of their local Kerala folk music into a thrash and groove metal assault. Other bands coming out of India are as diverse as the county itself but for the most part, Sahil says, they don’t go overboard on the folk motifs. “There are a few but not too many, because part of the appeal of metal here is rebelling against our own culture, which can be quite stifling,” he says. “So you've got Kryptos who play an old-school thrash and heavy metal, you've got Gutslit, which is brutal death/grind, and you've got Albatross, another band who does horror metal with Iron Maiden-style soaring vocals.”

If many of the styles and subgenres are familiar to a Western audience, however, there’s often a uniquely Indian flavour to the lyrics, whether they’re raging against the social and political systems at play or referencing local culture and mythology. I Am Nothing, the most recent single from Mumbai thrashers Zygnema, rails against the misogyny and rape culture still sadly prevalent in much of the country. And then there’s The Demonstealer’s own band Demonic Resurrection, who specialise in an epic form of blackened symphonic death metal and whose last album, Dashavatar, revolves around the 10 primary avatars of the Hindu god Vishnu.

It's more than four years now since Dashavatar came out. The logistical and financial issues detailed by Sahil have prevented the band from being overly prolific, but that’s not the case for the singer/guitarist himself. Amongst other projects he’s also played in a comedy rock band called Workshop, an old-school death metal band called Reptilian Death and currently supplies vocals for an international underground supergroup-of-sorts called Solus Ex Inferis. He’s also channelled that seemingly limitless energy and passion into a solo project by the name of Demonstealer, whose most recent release is brand-new, blistering EP The Holocene Termination. It’s as apocalyptic as the title suggests and The Demonstealer himself says he poured all his negativity into it.

“I think everyone wakes up today and you’re almost afraid to open up your computer and see the latest horrific news,” he sighs. “I put it all into the music, because that's the best way I can express how I feel about where the world's heading. Whether it's COVID or climate change, or people getting dumber and dumber and falling for the most ridiculous conspiracy theories, forgetting the most basic science that we learned at school. It’s like watching evolution in reverse.”

The Demonstealer might have a streak of doom-laden darkness coursing through him, but Sahil Makhija remains more upbeat, especially on the future of his beloved heavy metal. “I definitely see Indian bands getting out of the country a lot more. They're all doing a lot more touring than we did a decade ago and we're getting more international bands playing India – when restrictions allow,” he smiles. “You still have Bollywood on the one hand and everything else on the other, but over the next few years I can see us building a reasonable scene and a strong audience right across the country.”

There are still plenty of challenges ahead but there’s already a lot of amazing music coming from this vast and vibrant country, and a strengthening Indian metal scene can only be a very good thing.

Bloodywood: “The theme of this band is that it has to be something that adds value to this world”

From starting out with the goal of “destroying pop music”, to now writing songs that “hope for a better world”, Bloodywood have quickly become one of India’s most important metal exports. And with debut album Rakshak, they’ve got what it takes to go all the way…