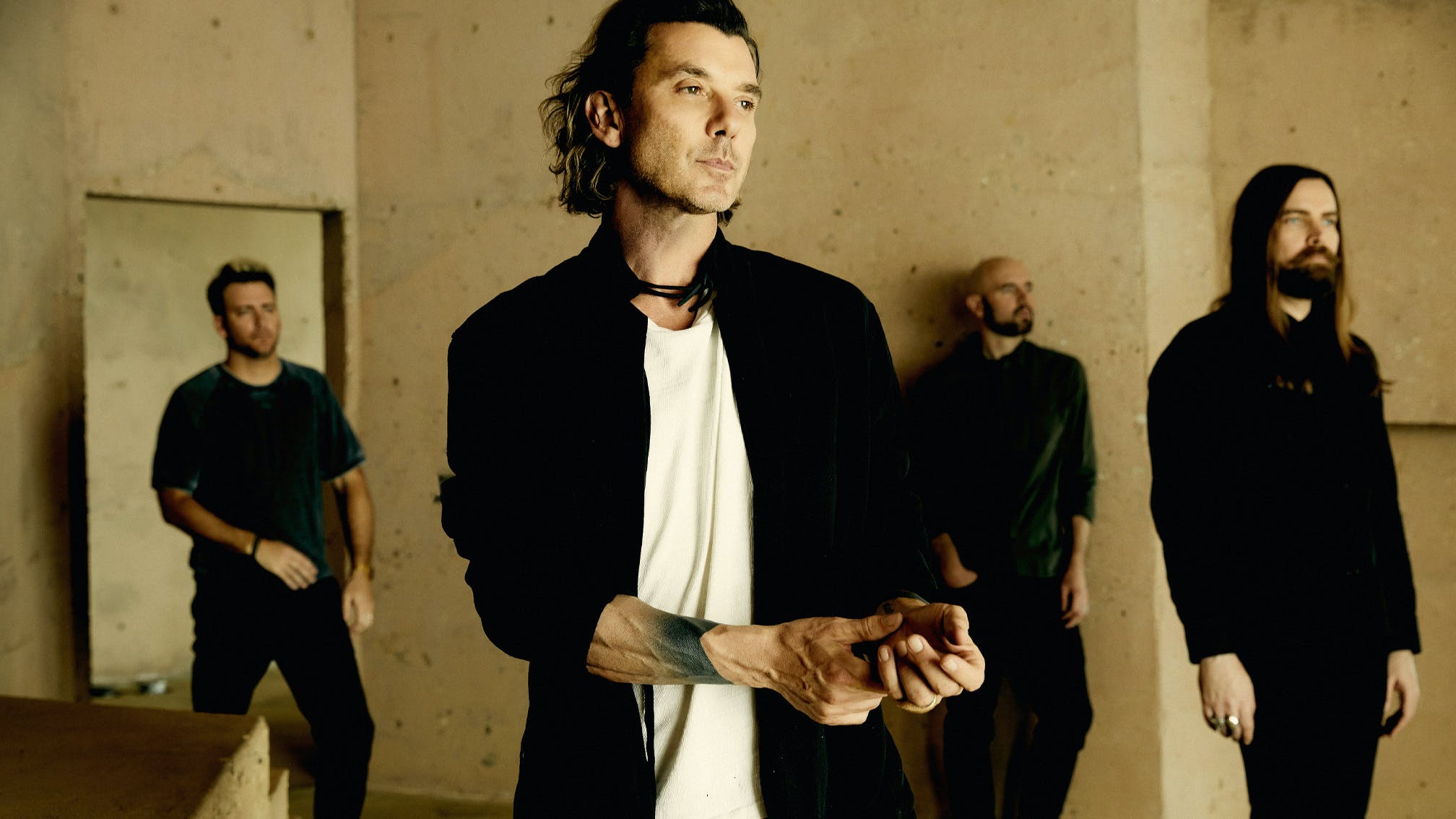 “It’ll be wild!" Gavin tells Kerrang! today as he looks ahead to the band's first performance since February, alongside the first live airings of three new songs.

You'll be able to get involved on Kerrang!’s Facebook on Monday July 20 at 6:30pm UK/1:30pm EST/10:30am PST, and on our YouTube shortly after. But to whet your appetite for some absolutely monstrous hard-rock anthems, Bush mainman Gavin guides us through the stories behind each song in the set.

"Writing Everything Zen felt like a seismic moment for me. I guess I’d written enough shitty songs by that point that I was inevitably going to start writing some better ones! As with all the earliest Bush songs, it started with me and my drum machine: I’d record the riff on a cassette tape and then walk around The Regent’s Park or Hyde Park playing it in one ear, and trying to sing melodies and lyrics to go along with me. Writing the lyric 'Should I fly to Los Angeles, find my asshole brother' felt like a change in my approach, that incendiary lyric immediately felt like it had more impact than anything else I’d previously written. Britpop was really massive at the time, and I’d sort of given up trying to be successful in music – I’d been in a couple of bands already and got nowhere – and I was fully aware that in writing that line I was signing my own death warrant in terms of getting signed to a record label in England, because it was going to be (adopts horrified London A&R man voice), 'This doesn’t sound like Suede!' So that felt really liberating.

"We rehearsed in an estate in Harlesden, which at time was a really heavy area, like, the murder capital of Europe, and when the guy who signed us to our first record deal saw us there, this was one of the songs he liked best. But it didn’t initially feel like a hit single: in fact, when we lost our distribution deal with Hollywood Records, and got dropped, someone there famously said, 'Not only are there no singles on Sixteen Stone, there are no album tracks either.' I went back to my day job as a painter, and just thought, 'Oh, okay, well, I enjoyed making the record at least, that was fun.' But then [Trauma label owner] Rob Kahane got us onto [influential LA radio station] KROQ and suddenly Jimmy Iovine and Ted Field at Interscope told us that they loved the song, and wanted to meet us. And then everything changed…"

"As we started out writing songs for the new album my manager Peter Katsis asked if I’d be interested in writing some songs for movie soundtracks, and he set up a couple of lunch meetings with [producer/film composer/Marilyn Manson guitarist] Tyler Bates. I didn’t necessarily want to be there, I thought my time would be better spent in the studio, writing, but I thought I should be open to new ideas and new possibilities. So then we went into the studio and just hit it off, and Bullet Holes was the second or third song we wrote together.

"Tyler is so busy, he always has, like, three movies and two TV shows on the go, so it was just a two hour session, but luckily I write quite quickly, and he comes up with great riffs and melodic ideas. He played the song for [film director] Chad [Stahelski], who was working with him on the soundtrack to John Wick: Chapter 3 – Parabellum, and he liked it and that was it. I hadn’t seen the movie at all when I wrote the song, but lyrics like, 'I used to wish in symphonies' seemed to fit in perfectly. For most people, this would have been their first taste of The Kingdom, and I think it’s a good reflection of what people can expect."

"My instant memory of Swallowed is that [producer] Steve Albini said it was the only turkey on the album: he thought we shouldn’t include it. The label were terrified of Albini, but they said, 'But this one has a melody!' and it became the first single… and our only hit in England, where we’re famously One Hit Wonders (laughs). I remember after I wrote it we played it during a soundcheck, and everyone liked it so much that they said, 'Don’t play that any more in soundcheck!' in case, like, I don’t know, the Russians were secretly taping our soundchecks and would sneak out a remix of it.

"Going into the writing of Razorblade Suitcase it was nice to have this song in our back pocket. Working with Steve Albini was incredible, I had a life-long appreciation of his work, as the most infamous recording engineer in post-punk and hardcore. His issue with Swallowed was that it used a standard quiet/loud dynamic, but the label felt really strongly about it. There’s that famous music industry cliché where an artist complains about being so famous that it hurts, that it’s actually quite a miserable time, and I guess Swallowed was as close as we ever got to that kind of idea. Suddenly all the UK media – apart from Kerrang! who understood us and were with us from the start - were doing this one same story which was, ‘In America, they’re bigger than Oasis, but in the UK, no-one knows who Bush are!’ which was funny initially, but began to get pretty boring as the only narrative they could push. We didn’t want to be one hit wonders, but radio in the UK wouldn’t play our records: we were trying!"

"Much like with the first record, a lot of the songs on The Kingdom were written with me sitting in my bedroom with a drum machine. We were working in the studio with [co-producer] Erik Ron and it was an amazing experience putting this song together, everyone in the band came in and put their own spin on it, and it came together so quickly. It’s the second single from the album, and again, a pretty good example of what people can expect. I think a good single is still an important introduction to an album: I’m not very good at picking singles, that’s one area where I’m happy to defer to the record label, but I think we’ve now had 21 hit singles in America, so someone knows what they’re doing. I’m like, 'Okay, you keep picking them, and I’ll keep writing them!'"

"I think this was the most Pixies U-Mass/grunge song that we had on the first record, and it became one of the songs by which people came to define us. I remember when I wrote it, this girl that I was dating at the time, Suze DeMarchi from Baby Animals, said, 'That is a fucking good song. You don’t even know how good that song is.' And I think she was right, but later I started to realise that it could be important to us. There was a guy at Hollywood Records who really loved this song, Frank Wells, but he died in a helicopter crash, and as often happens, there was a changing of the guard at the label, and no-one else seemed as interested as he had been. Ultimately, fortunately, their disinterest worked in our favour, because that allowed Interscope to step in, and at the time they were probably the coolest, most powerful, trend-setting label, with Nine Inch Nails and Tupac and Snoop Dogg, and they changed our whole fortunes around. Little Things was the second single from Sixteen Stone, and a big success for us: maybe we wouldn’t be talking now if that song didn’t exist."

"When I was putting together ideas for the new album, I read about this river in the Highlands in Scotland which, I guess because of the copper in the soil, goes bright red, and it flows down to this underground cave called The Devil’s Pulpit. I thought, 'Oh, I could work with this, this is perfect for me.' The word ‘pulpit’ is a tricky one to work into a song, so I changed it to sing about The Devil’s Stage, and I was able to tap into my Celtic blood, and unleash my inner [18th century Scottish clan leader] Rob Roy!"

"It’s weird with this album, because although it was written last year, a lot of the lyrical themes seem to tie in with what’s happening now: you’ve got Bullet Holes referencing race wars, which has a relevance in the light of all the protests in the wake of the murder of George Floyd, and then you have Flowers On A Grave talking about isolation and loneliness which strikes a chord in the current climate with the coronavirus lockdown, and then The Kingdom is like this rallying call asking people to rise up and stand for what they believe in. It’s about finding strength in unity, and that seems like a very relevant message, with good people coming together to seek sanctuary. I’ve always wanted to write a song with the same sort of power as [Sixteen Stone-era hit] Machinehead, and this to me has a similar feel and impact. "

"When my second band fell apart, I was trying to find a new guitar player for what became Bush, and getting increasingly frustrated. I remember kinda saying to myself, 'You’re pathetic, you say you’re a songwriter, but you can’t write a song without a guitar player, that’s so weak.' So I forced myself to sit down with my guitar and write a song, and out of that came Comedown. I met Nigel [Pulsford, original Bush guitarist] through my girlfriend Suze, and this was one of the songs I took to him to try to get him to be part of my new band. At the time he was earning good money doing incidental music for promotional videos, and he didn’t really want to be wasting his time with another loser dude with long hair and big dreams, but something about Comedown made him think that Bush might actually do something. And that worked out quite well."

Bush's new album The Kingdom is released tomorrow, July 17, and is available to pre-order/pre-save now.

Watch a special album-launch livestream from Bush on Monday with Kerrang!

Bush's Gavin Rossdale: "When you're really successful you get headbutted often, and we got hit a lot! But I'm half-Scottish, I can take it"

Bush frontman Gavin Rossdale reflects on a life in rock: from run-ins with the press to overnight superstardom