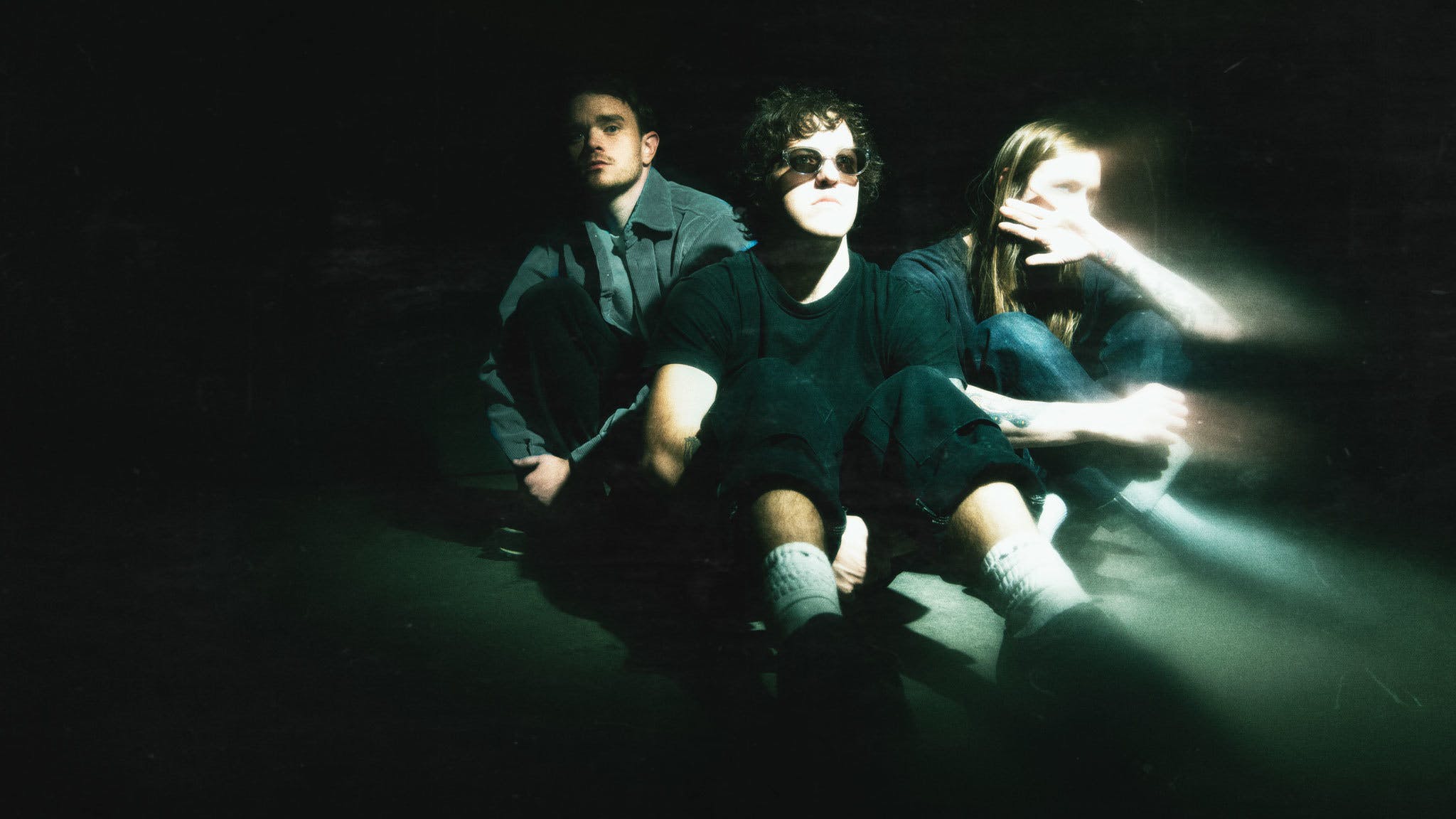 Candy are not the kind of band to knowingly pull their punches. “The next record?” mused guitarist Michael Quick when he spoke to Kerrang! In late-2020 about their expanding role in the rising wave of hardcore brutalism. “I don’t even want it to be music, honestly. I want it to go to that level of rhythmic noise that’s just blasting ideas into your head. I don’t want there to be riffs, I just want it to be crazy fuckin’ rhythm that’s somehow effective on an emotional level... I hope you hate it!”

Two years down the line, it feels like mission accomplished – in everything other than our hatred, of course. Where 2017 EP Candy Says and 2018’s full-length debut Good To Feel were the sound of rebels stabbing at the outer boundaries of musical theory, hardcore convention, and even simple listenability, second album Heaven Is Here finds them chaotically breaking through. With shades of everything from pop to powerviolence, from electro to extreme noise, it feels like a game-changer without an ounce of compromise or pandering to current ‘genre-bending’ trend.

“We’ve had so many outside influences for this band since Day One,” Michael picks up this afternoon, barely missing a beat. “We listen to all kinds of music, and we like to incorporate it all in what we do. One way you can achieve that is that when you push everything to that level of insane extremity where it all sounds crazy – when you push hardcore and metal and electro past that rhythmic barrier to the point where it’s just blasting – it all begins to sound kinda interlocked. When you push music as far as it’ll go, when it’s all out there, you stop being able to see those big differences in genre. It’s calculated chaos.”

Rather than directing listeners towards any particular emotion, the goal is to empower them to tap into their own. In a world where it feels like everyone from politicians to pop culture personalities are constantly testing the extremes of right and wrong, people have become numb to triggers that should be stirring something in them. Candy’s music is an antidote to that desensitisation. Extreme feeling, they believe, can shake people out of their slumber and back onto the path of righteous, in-depth thought.

“It’s more about energy – high energy – and communicating that sense of [freedom],” Michael continues. “If you can get the energy high enough, it can really open the door for whoever’s listening to access whatever emotion they need to. Sure, sometimes when I write, I’m angry or I’m sad, but that’s not all that’s there. I’m really just trying to get to a level where it feels like I’m firing on all cylinders in my head. If I get to that level – where that’s truthfully there, where I’m not faking it – then when people listen, they will be able to find any emotion in it.”

“Good music makes you feel something,” chimes vocalist Zak Quiram, whose words in Candy are often a direct reaction to the music presented fully-formed to him by Michael. “And good hardcore music is about something. It needs to speak to something related to your life or the world around you. Those things really do go hand-in-hand for a band like ours.”

But Candy aren’t really like any other band. Where the majority of the America and Europe’s current hardcore heavyweights are the products of isolated city scenes, this collective come from all over. Michael joins us today from Richmond, VA. Zak hails from Buffalo, NY but resides in Los Angeles, CA. Their bandmates Drew Stark (guitar), Steve Digenio (drums) and Kaleb Perdue (bass) are dispersed right across the United States. Rather than being bonded by shared ZIP codes, these are individuals brought together by common purpose, meeting as each other’s older bands toured from city to city, drawn together by a sort of renegade magnetism.

“We realised that we had a group that we really wanted to keep together, abandoned everything else, and formed Candy,” shrugs Zak. “It was about making sure that we could create something special.”

Michael nods: “It was really just about everyone’s commitment to throw everything in our lives to the wind and make music and touring a priority. We all got into hardcore around the same age and had our squads around us in our home cities. But as you get older and older, people just drop off, get jobs and go away. We never did. It whittled down to the point where there were just a few of us left. We trusted each other, and we knew that we had to go and do this. Honestly, we didn’t think this band would be any different. It was like, ‘We live in different cities, no-one’s going to care, but we have to try.’”

Michael and Zak grin when we observe that all that whittling-down means that they’re very much at the pointy end of the stick. Forming the band just as the Trump presidency was about to become a grim reality, they had a worthy target to jab at.

Although sloganeering can be a little redundant amongst the buzzsaw cacophony of Candy’s oeuvre, political purpose is a massive part of what drives them, and songs like Human Condition Above Human Opinion (‘Future relinquished / Existence extinguished / Disparaged faith / Celebrating ignorance / Calling out for vigilance…’) and the explosive World Of Shit (‘Dreams hindered by factions / Chained to demands but not actions / Freedom is not a permanent condition/ Freedom a result of resistance…’) are filled with inflammatory messaging for those who care enough to dig up a lyric booklet.

“Politics are essential to hardcore,” explains Michael. “From day one, the whole point was to make a statement about society. If you’re a hardcore band and you’re not trying to address what’s happening in the world, you’re missing the point.”

“It’s disgusting,” seethes Zak, more jaggedly cutting to the heart of a modern American experience that seems to be buckling under end-stage capitalism and a socio-political regressiveness that actually seems to be reversing cultural progress. “That’s going to come out in our art and music no matter what because of the things that we care about and pay attention to, and our human nature, no matter what. But it’s definitely more important than ever to speak on things like that.”

Is it, though? With the messy ousting of the Tango-toned MAGA figurehead last January and a return to predictable normalcy – the U.S. establishment’s flexible shades of grey – is it really as easy to tap into the fire inside without such an easy target to lock onto?

“I don’t think there are shades of grey,” counters Zak. “It’s all an easy target, and it feels like, no matter what you do, nothing changes. There are still the people at the top stepping on the smaller people to get further ahead.” Rather than getting specific figureheads in the crosshair, he expands, their latest material is about the infuriating experience of just existing in these troubled times. “The song Heaven Is Here is just about getting a little older and trying to deal with society’s expectations for you, and all the limitations that come with that. It’s about that inner turmoil of trying to fight that, while trying to have morals and do the right thing and help out other people in the world. Obviously, it’s impossible to achieve everything, so it’s about the struggle.”

“At the risk of sounding insanely nihilistic, I don’t believe that it’s that different now to how it was when Trump was president,” picks up Michael. “Sure, there are arguments that, for instance, the potential reversal of Roe v. Wade [this interview was done before last Friday’s decision] wouldn’t be happening if Trump hadn’t been the president in 2016, appointing his people to the Supreme Court. But now we have democratic president, house and senate, and systemic oppression is still happening on a number of levels. Think of any marginalised group, and they’re still [suffering]. It might seem more grey from the top of the political system, but if you look at the street level it’s more black and white: minorities are still being shot by the police, with no difference, despite everything that happened in 2020.”

If anything, it’s that ideological unwillingness to compromise that anchors Candy to the hardcore scene in which they grew up, when they could as easily be moving in murky extreme metal circles, or hanging out with the kind of chin-stroking musos who more traditionally preach the benefits of such overwhelming noise.

“I think it comes down to that question: ‘What does hardcore even mean anymore?’” reasons Michael. “We call what we do hardcore because we grew up in the DIY hardcore scene. We’re proud to be part of that. But if some hardcore punk purists want to say that we’re not a hardcore band, I wouldn’t really fault them. They could say that we sound nothing like Youth Of Today, and they’d be right. At the same time, I think that hardcore, at this point, doesn’t need a strict definition. I’ll listen to music that’s made with drum machines and synthesisers and see that it’s more hardcore than ‘Hardcore Band X’ on the popular hardcore festival.”

As we take our leave, we can’t help but wonder whether Candy still see themselves as “filling a void” in the scene, as they intimated in our last chat?

“Man, we were really on one that day,” laughs Michael. “But I do think that we offer something that other bands don’t. We believe that hardcore can interface with other types of music. We don’t think that it should be sectioned-off. What we offer – beyond the extreme, abrasive sound – is that effort to connect with those other types of music. If you look at the tour we’re about to go out on with [Connecticut/Western Mass’] Restraining Order, who’re an awesome straight-up hardcore band, and [rising New Yorker] LustSickPuppy, who does this kind of crazy rave music, you can see what we’re trying to achieve. We want to shake up the homogeny of music and culture generally – and to aggressively keep pushing to the next level.”

There’s not even a hint of sugar-sweetness in their sound, but, more than ever, Candy are a band worth sinking your (broken) teeth into.

Heaven Is Here is released on June 24 via Relapse

With new album Heaven Is Here arriving next Friday, Candy have unleashed record’s third single: the aptly-named World Of Sh*t.

Listen to Candy’s new single Transcend To Wet, taken from their upcoming album Heaven Is Here.

In Pictures: No Warning And Candy Give London A Bruising