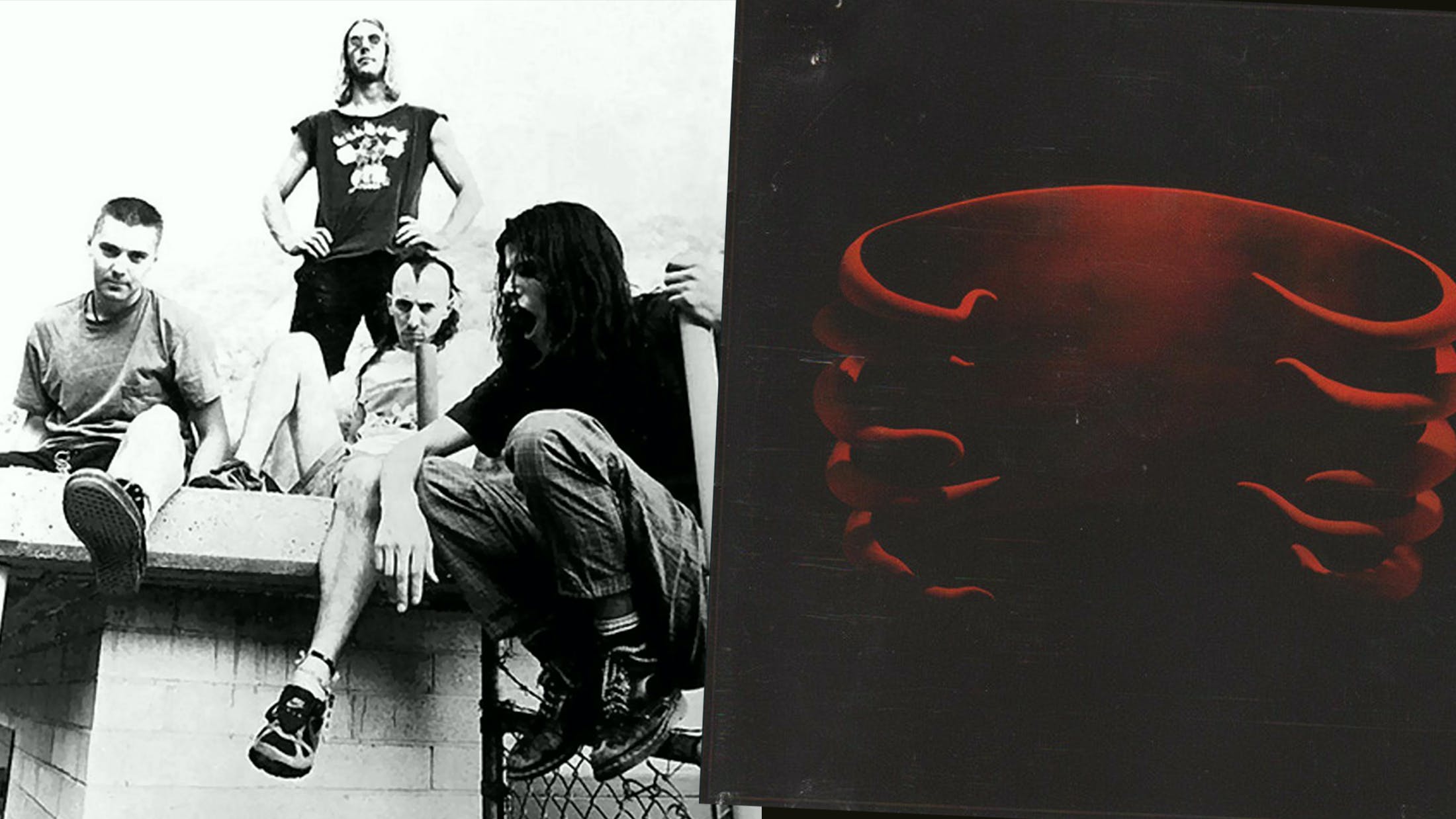 Rock wasn’t ready for Tool. Some would argue, in 1993 we weren’t even worthy.

'You’re dancing in quicksand,' sang frontman Maynard James Keenan on the aptly-titled Swamp Song. 'You’re wading knee deep and going in, and you may never come back again…' To catch listeners off-guard and utterly consume them was the aim. Maynard wanted this music to have that feel of standing in the surf being pulled under and out. As it took hold, it would change everything – not as some revolutionary riptide, but the subliminal Undertow after which the band’s debut LP was titled.

It helped that no-one knew what to make of this quartet of misfits coming out of La-La Land. All had blown in throughout the 1980s. None, it seemed, were interested in the skin-deep sheen on which the city had built its reputation. Having studied visual arts in Michigan, Maynard found work remodelling pet stores – and infamously lived with a menagerie of animals – before becoming a movie set-designer. Guitarist Adam Jones had fared more successfully, with VFX credits on all-time great blockbusters like Terminator 2: Judgement Day and Jurassic Park. Drummer Danny Carey lived above Maynard and was apparently introduced to Adam – as chance would have it – by Rage Against The Machine guitarist Tom Morello, with whom the guitarist had attended Libertyville High School and performed in formative project Electric Sheep. Legend has it he only agreed to jam with the band out of pity – other potential collaborators having simply failed to show up. The line-up was completed by converted six-stringer Paul D’Amour on bass.

They initially refused to acknowledge even these simple truths. Rejecting initial band-name Tool Shed, the band toyed with a narrative where they had been brought together by the pseudophilosophy ‘lachrymology’ – the science of crying as therapy – even citing Ronald P. Vincent’s 1949 volume The Joyful Guide To Lachrymology. It was all, of course, a hoax.

Even when music had started to emerge on 1991 demo tape 72826 (which featured early incarnations of Sober and Crawl Away) and 1992’s Opiate EP, record execs struggled to label these strange, unruly sounds. Were they metal? Industrial? Grunge? As trends rose and fell, they were labelled as each and all of the above. In truth, they were something else entirely.

For emergent outfits, that sort of obstinate mystery can be something of a gamble. Still, Tool insisted the music do the talking. Paired to the sounds they were generating, it felt like a natural fit.

April 6, 1993 – Undertow’s release – would see matters begin to come into focus. Although songwriting had been an ongoing process since Maynard and Adam’s first meeting in 1987, those early demo recordings hadn’t been able to match their intricate ambitions. Label pressure from Zoo Entertainment on Opiate had seen the band forced to front-up with their heaviest material for a metal scene on the slide. Having been able to reunite with rising star producer Sylvia Massey and retreat to the studio for a then-luxuriant three week recording process (Opiate having been hammered out in four days), their sprawling vision – that full range of strangeness – started to bleed through.

Opening with the sampled sound of a bong rip and slow exhale could’ve come across self-parodical. Looking back, it’s impossible to imagine anything more fitting. Sharp yet amorphous, angry but controlled, raw yet unapologetically intellectual, these were shapeshifting sounds from artists on another plane.

There was much, admittedly, to rise above. Frustrated by scraping by in the “dog and pony show” of the film and music industries – Maynard was unfulfilled, pent-up, impoverished and poured so many of those emotions into his performance. His bandmates, who’d been blockaded from Los Angeles’ club circuit by a glut of knowingly decadent hair-metal outfits for the last decade, strived to create something more profound, more worthwhile. Coming up alongside future legends like Rage Against The Machine, the Rollins Band, White Zombie, Fishbone and Corrosion Of Conformity raised the bar.

Melding, to an extent, the steely outrage of Rage and the psyche-plumbing introversion of Nirvana, there was no lack of meat for Generation Xers to latch onto. There was a bleeding-edge fearlessness in confronting subject matter as unpalatable as cyclical sexual abuse as head-on as they did on Prison Sex. They spoke famously against Scientology, spending much of a gig at their 1993 show at a venue they owned in Hollywood baa-ing at the audience like a sheep, admonishing any belief system “that constricts a person’s development as a human being.” Since the early days, too, they’d railed against the censorship and Tipper Gore’s then-prominent PMRC.

It was a fight on which they were unafraid to throw punches. When outstanding visual artist Adam took on the creation of album artwork, the iconic red ribcage became a quick focal-point. It would expand, though, to incorporate more unsettling imagery: an overweight man and woman in the nude, X-ray scans of a dildo inserted into a rectum. The pig on the back cover standing amid a collection of upright forks with the word ‘undertow’ (not really) shaved into his side was Adam’s pet porker Moe (who reportedly lived into old age on the desert ranch of Kyuss / The Obsessed bassist Scott Reeder). A section of the artwork hidden within the original CD casing featured a cow licking its ass. Typically, that led to U.S. mega-chains Wal-Mart and K-Mart to refusing to stock the album. The band quickly cobbled together a censored version with a form fans could send away to receive the original artwork at no additional cost.

For the uninitiated, the unsettling stop-motion clips for Sober and Prison Sex smuggled the band’s ideology into living rooms around the globe at the height of the glossy MTV era. Directed by Fred Stuhr – who’d previously collaborated with joke-rockers Green Jellÿ (who, in turn, featured Danny on drums and Maynard, sporadically, on vocals) – with input from Adam, they were as much as the music, unlike anything that’d come before. On one level, the strange, unsettling imagery was enough to make folk shift uncomfortably in their seats. Within Tool’s eyes, it was a reaction to the cult(ure) of personality that drove so many of the music videos – so much of rock culture – at the time. Critics were captivated by that subversion of the traditional inter-relationship between artist and audience, video and viewer.

As fandom and fame caught like wildfire, Maynard raged ever more at people’s obsession with connecting artist with art. One should be able to appreciate the Mona Lisa, he argued, without needing to know whether Da Vinci was a nice guy. Still, Tool’s insistence in keeping the veil lowered proved all the more tantalising for fans as mischievous nuggets and glimpses of a manic artistic process leaked out.

On the lesser end, there were accounts of Adam using an Epilady hair remover on his strings to achieve some outlandish guitar noises. “It’s even better than an E-Bow…” he told Guitar Player at the time. The practice of storing his 1976 Marshall non-master volume bass head in his refrigerator to preserve its lifespan between recordings, too, heightened the sense of unhinged genius.

On the more unhinged end of the spectrum, when recording Disgustipated – the record’s eerie closer – they amped up the strangeness. The video footage of Maynard emptying four pump action shotgun shells into an old upright piano still looks like something from an OTT mock rockumentary. Rollins Band guitarist Chris Haskett also laid into the tattered strings with a sledgehammer – earning himself perhaps the maddest keyboards credit in rock history.

Chris’ bandleader and Tool’s old mate, Henry Rollins himself, cropped up for a trademark harshly motivational spoken word contribution to the seven minute Bottom. Tool had forged bonds with Henry while opening for the Rollins Band through 1992, perhaps finding a kindred soul in his commitment, uncompromised and famously dry humour. Typically, though, Maynard told Musique Plus – only perhaps playfully – that the legendary frontman only agreed to the part to pay back a thousands of dollars poker debt he had racked up playing with the band.

Piss-taking, fun and games aside, the record marked a moment in time that would quickly be lost forever.

Another outsider celebrity with wit drier than a peppermint fart, legendary American comedian Bill Hicks was credited as a huge influence on the band. Thanked in the liner notes and sent copies of the CD, he would reciprocate by introducing the band at Lollapalooza in Irwindale, California in August of 1993. There was tantalising talk of further, more artistic collaboration. That possibility would be snatched away by Bill’s untimely passing from pancreatic cancer in February of the following year.

Internally, bassist Paul D’Amour had been shaken loose, too – his treble-heavy contributions betraying a desire to return to the guitar and recruit a four-string replacement. Adding another personality to the already combustible mix never felt like a realistic option for his bandmates, however, and the tension eventually led to his departure from the band and replacement by Justin Chancellor for the making of 1996 follow-up Ænima.

For a band as unapologetically exploratory as Tool, it feels strange to ponder those roads cut short and not taken. Perhaps they were necessary reroutes on the evolutionary path to becoming the world-conquering, scene-changing force we know today. Still, with the quality of these songs, and that defiant energy that many argue has gone unmatched since, you can’t help but wonder how things might’ve unfolded differently.

Over three million sales and almost three decades down the line, one thing’s for sure: as much as these four oddballs refused to be pigeonholed or placed on genre-pedestals, they triggered the tidal surge of a new breed of ‘progressive’ that would change music forever…