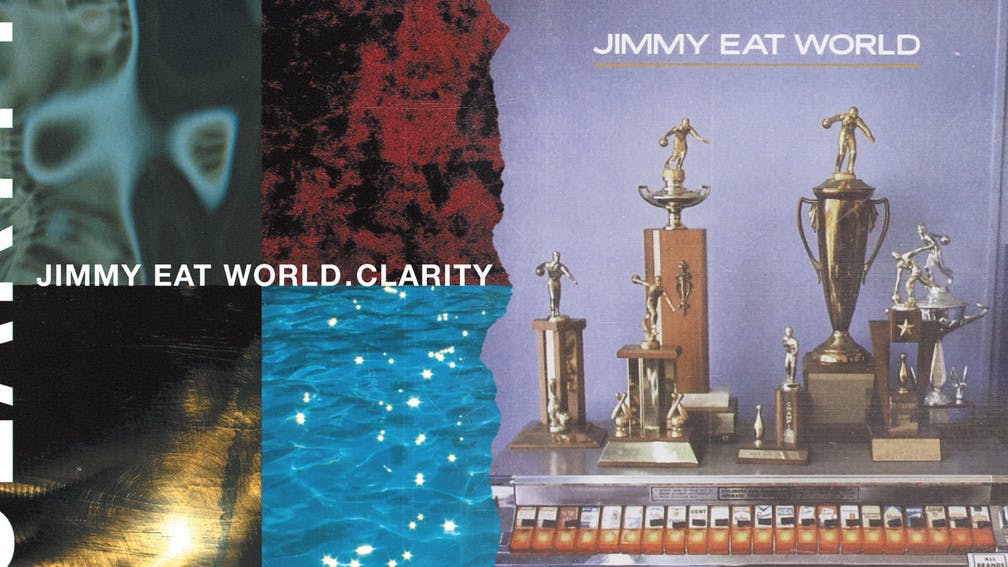 Jimmy Eat World put out Clarity, their first true classic album, 20 years ago today. If you've ever been around their fans you'll know that debate rages about whether it or its mega-selling follow up Bleed American represent the band's creative peak or not. So we figured we'd enter into the spirit of the occasion and get two of our biggest Jimmy Eat World aficionados on the case. Here goes…

I have to admit, when I was asked to make an argument for the best Jimmy Eat World album, my initial reaction was one of confusion. How could someone make the case for anything but Clarity?

Look, let’s get personal bias out of the way: I have a Clarity tattoo. As I revealed earlier this year, my first ever piece of ink was an anchor commemorating Mineral’s EndSerenading – and my second was a butterfly (a masculine butterfly, mind you – we’re talking one tough, badass butterfly) echoing a lyric in For Me This Is Heaven, Clarity’s 10th track.

So, sure, the album is personally important to me, having been released during my junior year of high school, one of the most impressionable periods of my entire life. But today, exactly 20 years later, I can still confidently say that Clarity is a perfect record: perfectly written; perfectly performed; perfectly produced. And although it was a commercial failure in its time, its impact on the music industry is immeasurable, still reverberating today.

I can remember every detail of the first time I spun the CD in my clunky AIWA stereo system in my bedroom – the way I sat there in awe, captivated from Table For Glasses’ opening organ hum, followed by that sparse hi-hat and snare, guitar and layered vocals not far behind. Never before had I heard such vulnerability and beauty laid atop an angst-fuelled punk rock foundation.

As each track of the album rolls on, Jimmy Eat World show tremendous versatility in dynamics in style – from the angular, guitar-driven post-hardcore of songs like Your New Aesthetic, Believe In What You Want, or closer Goodbye Sky Harbor, to the slower, quieter moments of ballads such as A Sunday or Just Watch The Fireworks. Not to mention the frolicking, fast-paced homages to their punk rock roots: tracks like Crush or Blister. Meanwhile, Jim Adkins’ effortless lyrics – simple and without pretension, but poetic and purposeful – are vague enough to leave room for interpretation, but clearly conveying a wistful theme throughout: a longing for clarity, in love, art, and work.

Beyond the masterful songwriting, the album is also an incredible technical achievement. Production from Drive Like Jehu’s Mark Trombino (incidentally, also responsible for that other emo masterpiece of the era, EndSerenading) is crisp and clean, but powerfully organic – with its expansive swells and contractions, one can almost hear the music itself breathing. Trombino’s experience as a drummer inspires one of the most superb drum tones ever recorded, along with vibraphones, bells, blocks, and various other percussive instruments popping up in just the right places throughout the album. Rising strings and guitars layered upon guitars build texture throughout.

As if the work itself weren’t enough to secure it as Jimmy Eat World’s greatest album, Clarity paved the way for dozens of other bands in the early 2000s. While Bleed American broke Jimmy Eat World open to the masses with the more direct, transparent lyrics and syrupy hooks of pop smash hits The Middle and Sweetness, Clarity inspired musicians. Its melodic blend of passionate energy, loud guitars, and emotionally-charged vocals would provide a blueprint for the third wave of emo to come. Bleed American brought bands like Fall Out Boy and Paramore out into the mainstream, but Clarity is what inspired those bands to form in the first place. It is the seminal work of an entire genre – one timeless enough to have warranted a 10 year anniversary tour, and sound just as vibrant and relevant to our musical landscape two decades after its release.

Clarity is not only Jimmy Eat World’s best album – it’s the greatest album of a musical movement.

Before this argument reaches its final destination on Victory Lane, we must first make a quick detour down Disclaimer Avenue. You gotta drive past Digression Gardens to get there, but don’t worry, the views are pleasant. Anyways, before this awful analogy gets stretched beyond all credibility let’s have it right and get to the point: Clarity is a towering achievement of emo awesomeness. Man, Jimmy Eat World would hate that sentence. The person who just typed it is already filled with self-loathing and regret, but that might be the pizza and beer at lunch’s fault. Is the band’s third album one of the best of its kind? Indubitably. How about influential? Ask the scores of sad boys and girls with guitars still navel gazing to all eight hours of Goodbye Sky Harbour on the regular. No-one is saying Clarity is anything but stupendously good. It really is.

But Bleed American is just better. Admittedly, that’s not a tremendously intelligent tack to take in the serious business of hot rock record debate, but we’ll start there and work backwards.

While Clarity is an album touched by greatness, Bleed American is a great album. It was the one that made Jimmy Eat World huge. For a bit, anyway. It catapulted them onto the covers of magazines, for example. That’s Jimmy Eat World – four of the most regular-looking regular dudes you could ever imagine – sharing shelf space in the ultra-vacuous era of Fred Durst and Britney Spears' heyday. When Kerrang! put them on the front of the January 19 issue in 2002 and we boldly proclaimed that they would be the hottest band of 2002, even they had the decency to look a little embarrassed by all the attention. The NME followed suit a week later and stated that EMO [the all-caps emphasis theirs] was ‘a new rock revolution’ as fronted by Jim Adkins attacking his guitar in that endearing fashion he did and continues to do, albeit with less projected revolutionary zeal these days. The times, they were, not the same as these.

The underlying point remains, however, that Jimmy Eat World’s breakthrough (in global terms, at least) not only made the world stand up and take notice of the four bemused young men from Mesa, Arizona – it was the first album to see anything broadly agreed upon as emo rise above the underground pockets of homespun mini-scenes scattered across suburban basements, message boards and rudimentary file-sharing sites in the internet’s baby days (when everyone who searched ‘what is emo?’ was met with that photo of Still Life and instantly ‘got’ it). History hasn’t necessarily been the kindest to bands of such a persuasion, and even then the trend of (mostly) boys being sensitive was the subject of much derision and easy to sneer at. But at a time when a lot of metal was busy wearing its misogyny and brain-dead aggression as a badge of pride, bands like Jimmy Eat World offered a true alternative.

You don’t need a track-by-track rerun of the record here to be reminded of how momentous those 11 songs (we’re going with the UK release's tracklisting for simplicity’s sake) were and remain. Nor do we need to get into the renaming of the album brouhaha, because it’s a diversion too far and ultimately not that interesting. But there are flashes of damn-near genius on that album worth special mention. The insistent stomp and needling earworm of that title-track’s opening riff? Still daisy-fresh right now. There’s the self-referential playfulness of A Praise Chorus shouting out and featuring The Promise Ring and Cap’n Jazz’s Davey von Bohlen. The tangible sadness on Hear You Me, the touching tribute to the band’s late fans Mykel and Carli Allan, with added ache courtesy of Rachel Haden (of Weezer association and The Rentals / that dog-fame). The lyrics and spirit, simple yet universal as they are, rendered The Middle a bona fide chart hit that evidently continues to resonate, as the video's eye-watering 48 million views on YouTube attests. Your mum and dad probably know that song. Apparently even pop megastar Kelly Clarkson is a fan…

That’s without even getting into the fact that Authority Song might just be one of the band’s best yet criminally overlooked tracks. Or mentioning that iconic artwork.

Stepping back for a second, there’s a case to be made that Jimmy Eat World have not put out a single bad record across the nine they’ve released in their 25 years as a band. They’ve been different shades of their own curious thing across that spectrum, with Clarity being the go-to choice for those who know it’s the ‘cool’ record to pick in the debate about their best. Some – usually their slightly younger fans who don’t mind being resolutely wrong – might even be edgy and say it’s Futures. But Bleed American was their moment in the sun. It was the reason they’ve remained brushed by its rays enough to continue making a living doing what they do. It was something a little special and out of the ordinary at a time when there was a lot of ordinary around. It is, simply put, Jimmy Eat World’s lasting legacy and a bright, brilliant contribution to the great big rock canon.

Ahead of their UK and European tour dates this summer, Jimmy Eat World have kickstarted their next era with new single Something Loud.